The new Ferrari 458 Spider has arrived Down Under. Prices start at $590,000 (excluding on-road costs). The stunning drop-top joins the current 458 Italia coupe. 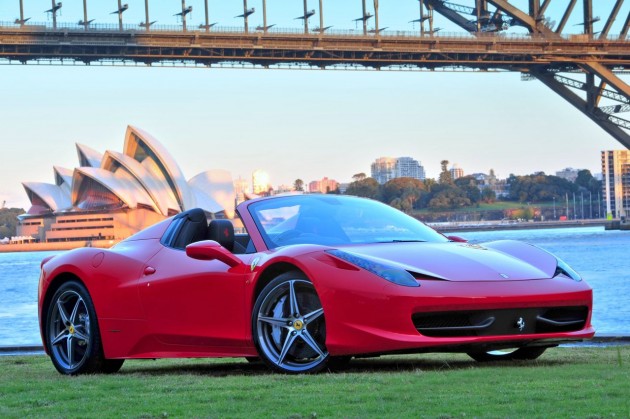 Demand for the Spider version has been so overwhelming for Ferrari and its production capacity, that as a result, just 10 examples will be delivered locally this year.

Despite losing the roof – also known as a structurally integral section of a car – Ferrari stresses that such engineering has taken place to develop the new Spider, that there is minimal sacrifice. Kevin Wall, general manager for Ferrari in Australia, recently said,

“It is every bit as much a supercar as its coupe cousin, the 458 Italia, with the same remarkable levels of performance, handling and road holding that have been lauded around the world.

“This has been achieved by a combination of a unique folding roof that has been a decade in the making and a design brief instructed the engineers to ensure nothing was sacrificed in the conversion to open top motoring.”

The new aluminium folding roof design is not only compact for minimal boot space intrusion, the unique design is also up to 25kg lighter than the fabric item used in the open-top 430 predecessor.

The new layout incorporates a pop-up wind-stop window which is apparently capable of reducing wind noise so much so that Ferrari says normal conversion can be had at speeds up to 200km/h.

Even though the roof is lightweight, the Spider tips the scales at 1430kg (dry weight), which is 50kg heavier than the Italia coupe (1380kg – dry weight).

This probably isn’t going to faze many interested buyers though, as the sound of that incredible V8 engine just behind the cabin would provide enough of an intense sensation with the roof down, drowning out any worries of power-to-weight ratio differences.