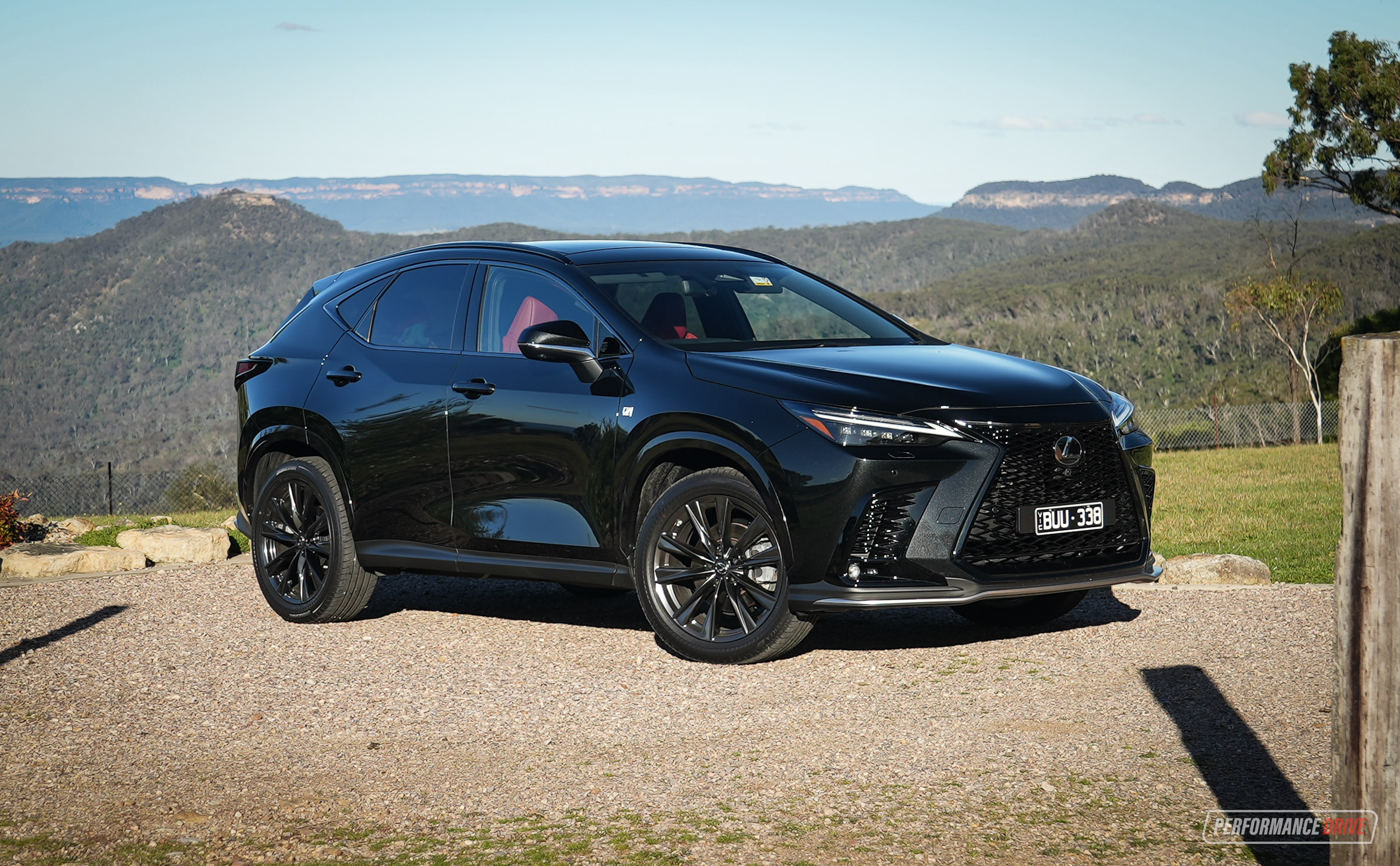 It’s the first ‘350’ badge for the NX mid-size SUV. Instead of a V6 though, as traditionally applied to Lexus 350 models, this introduces the brand’s all-new 2.4-litre turbo-petrol four-cylinder. It does sit among a sea of very fuel efficient hybrid stablemates in the new NX range, so is the 350 a tempting alternative? 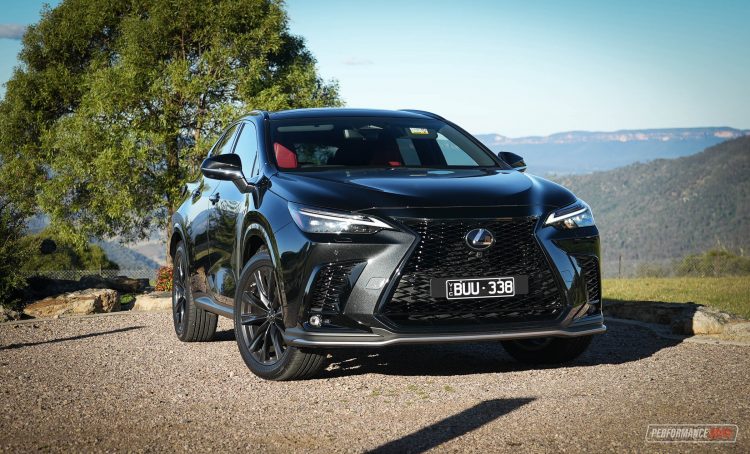 Prices are very reasonable when compared with most of the Euro competitors in this space. And it doesn’t look like prices have crept up in recent times like so many of the rivals have. The lineup kicks off from just $60,800, and even the flagship plug-in hybrid (one of the only PHEVs in this class) starts from $89,900.

These prices are obviously not going to suit everyone, but in this market segment specifically the new NX stacks up as one of the most affordable options out there. Particularly when looking at either end of the range spectrum. Likewise, this NX 350 F Sport starts from a modest $77,900 (all excluding on-roads). Although, that is around $10k more than the old NX 300 F Sport. But the extra kit and power goes some length in justifying it. 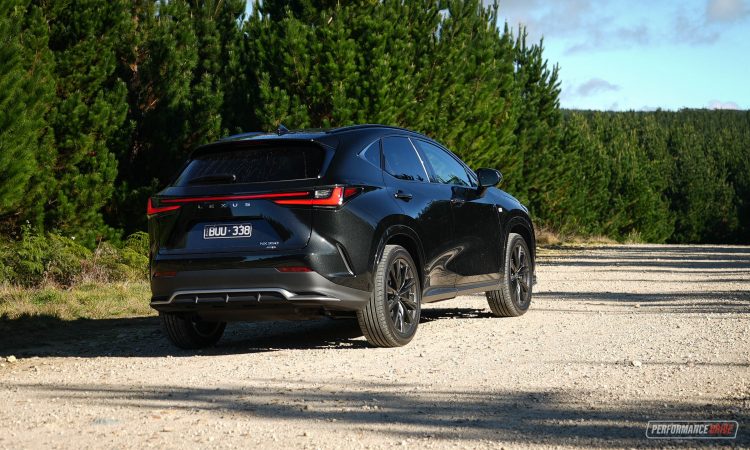 The new NX jumps to the TNGA-based platform (TNGA-K), as featured on many late model Toyota and Lexus vehicles now. It helps to see an increase in exterior dimensions, so it’s 20mm longer and 20mm wider than the previous model, while opening up interior space. Driving dynamics, and overall safety and compatibility with more advanced technologies are also a benefit of the new platform.

Inside, it’s clear to see Lexus is really looking to shake up the segment by standing out with a sharp and futuristic layout. The dashboard design and the way the chunky centre console cocoons you in place provide a really unique and sophisticated atmosphere. There is lots of advanced tech in here too, including a big new 14-inch touch-screen. 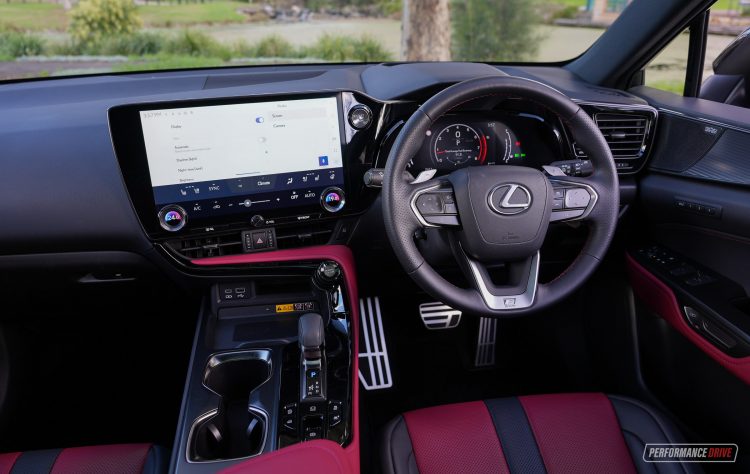 The graphics within the screen are quite appealing, but we are not a fan of the excessive blank realestate within some of the touch-screen menus. During the day this appears as a large bright white section, beaming out lots of light and almost causing too much contrast to see the other functions. Fortunately, there is a dark mode you can switch to which does help.

We love the little climate control dials and their inner displays, and the clever sliding wireless phone charger pad that conceals a storage pocket. And there are heaps of storage options around, including twin cup holders, a long centre console box, and some little coves and pockets on both sides of the steering wheel.

These F Sport seats hold you in place well while providing a very sharp and sporty look, with a good driving position available thanks to a wide range of adjustment including from the steering column. It is somewhat odd that the front headrests cannot be adjusted, though. The clever electronic door handles are textbook Lexus innovation, but they do take a bit of getting used to. 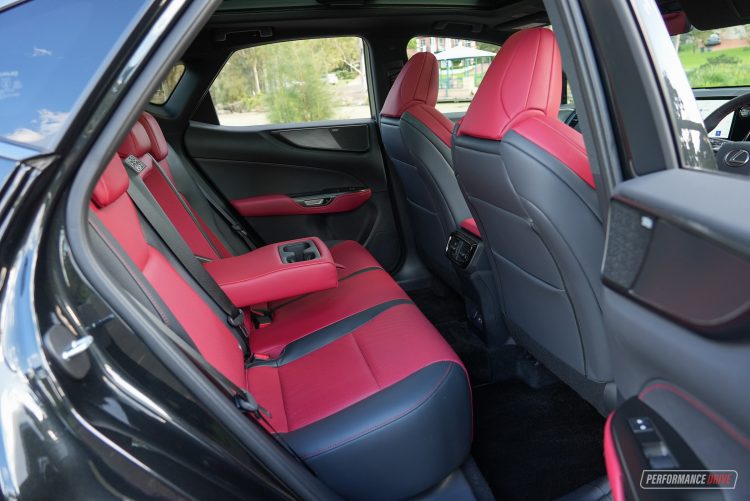 Rear seat accommodation is quite impressive for this class. The driveline tunnel in the middle doesn’t seem as large as it is in some of the competitors, while headroom and legroom levels are good. Climate vents and charging ports are standard (2 x USB and a 12V socket), and the fancy speaker trim for the optional 17-speaker Mark Levinson stereo is a classy touch.

Boot space has increased by 20 litres over the predecessor. Even so, it’s not quite as capacious as most of the Euro rivals, which offer around 550L. But at 520L, it is more than adequate for a decent shopping run or to manage passenger-loads of luggage for a weekend away. There’s also a surprisingly deep under-floor pocket as well, which is great for those smaller items that would otherwise bounce around. 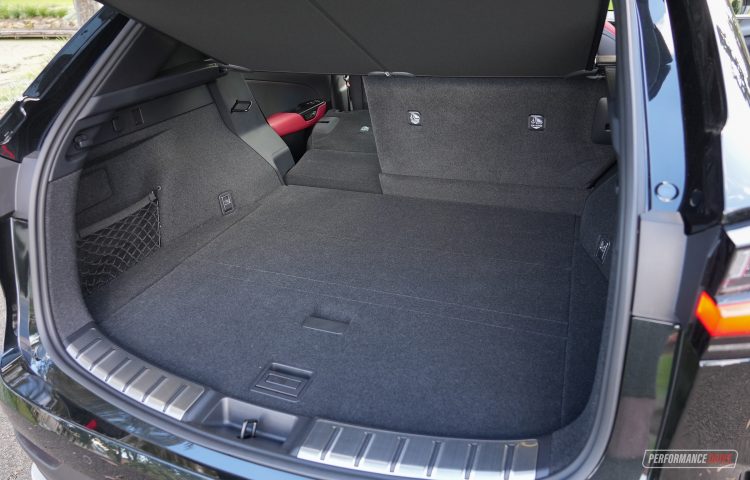 Perhaps the biggest change with the new model is the switch to the TNGA platform. This is Toyota’s latest architecture which means it comes packed with or is compatible with all of the company’s greatest tech and knowledge so far. What we appreciate most though is the improvements in driving dynamics.

While the previous model was pleasant and easy to drive, this new version is a lot more engaging and capable when pushed. It also remains pleasant and easy to drive, and hums along with splendid refinement. The steering feel is fairly linear yet predictable, with decent levels of communication coming back through the wheel. It has that solid and secure feeling, too, boosting your on-road confidence.

Despite being the sportiest variant, the F Sport rides nicely. There is plenty of suspension travel to catch big bumps, although it is stiffer than your average Lexus. We don’t mind that as it helps with handling during twisty roads. If you are after absolute comfort the F Sport is equipped with adaptive dampers, which is a first for the NX nameplate. This provides two different settings. 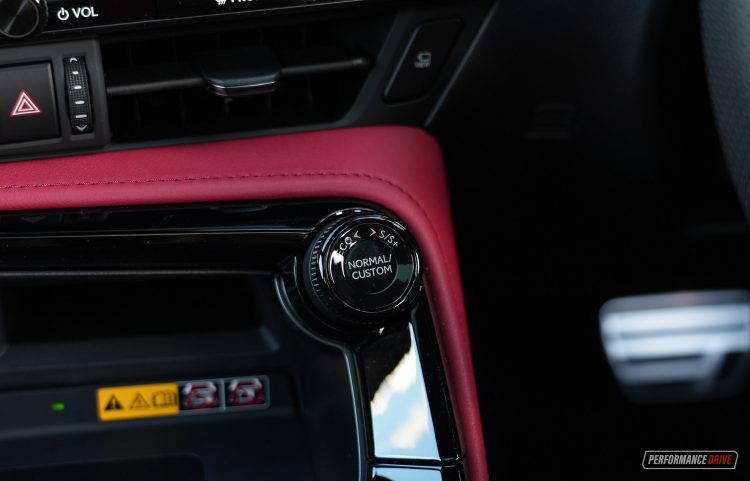 The driver also gets to play around with various other vehicle settings, including a new Custom mode which opens up the possibility of mixing and matching various parameters to create something of a greatest hits configuration. To be honest, we can’t imagine many owners using the sportiest suspension setting as the NX is just not that kind of vehicle. But it is good to have the option there for when you are tackling a demanding road.

Ground clearance remains the same as the previous model, at 190mm. That’s enough for light off-road driving, such as on rough dirt roads, but it’s not really enough for taking on more serious conditions. And anyway, the F Sport comes standard with dark-painted 20-inch alloy wheels wrapped in 235/50 Bridgestone Alenza tyres. These are not really designed for anything serious off the bitumen. 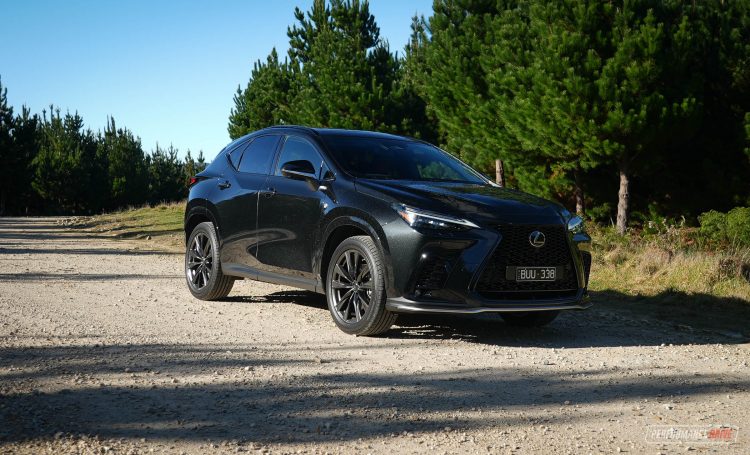 So, what about this new 2.4 turbo? Well, it sounds pretty similar to the old 175kW/350Nm 2.0-litre turbo from the outside, but it does produce a unique burble and roar from inside. The main attribute it brings though is 430Nm. That’s a big jump up from the 350Nm rating in the old 2.0L turbo. Torque is the stuff you’ll notice most, especially when you’re simply trying to get through a busy day.

You don’t need to rev it as high as the old unit to achieve meaningful acceleration and push. It really surges forward, especially in the mid-range. Outright performance isn’t too bad, with 0-100km/h coming up in a claimed 7.0 seconds. During our testing with a Vbox the best we saw was 7.32 seconds. That’s certainly quick enough to have some fun, but we can’t help but notice many of the equivalent European rivals achieving quicker results. And most with less power than this. 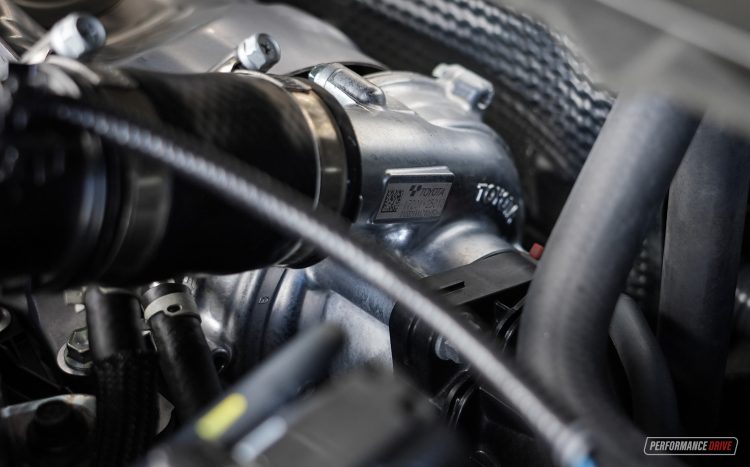 Overall, the 2.4 turbo is a great unit. We’re eagerly looking forward to seeing what other Lexus and Toyota vehicles get it in the future – if only the IS mid-size sedan was still around.

In the NX it feels sporty and excitable, while providing reasonable fuel economy for its class and for its power level. The official rating is 8.1L/100km and we averaged about 9.7L/100km during our week. Many of the 2.0T AWD competitors achieve similar real-world results.

The new Lexus NX is a superb evolution of what has always been a solid, extremely reliable, smart buyers’ mid-size premium SUV. Now, this is more luxurious than before, with, what looks and feels like less Toyota-influence than before. It stands out with an exclusive design, especially inside, with of course plenty of precision-made Japanese attention to detail and ingenuity.

Although we do like this new 2.4 turbo engine, we think the NX 450h+ is the one we’d go for. Lexus has always been about luxury, primarily. And in our opinion the smoothness and quietness of plug-in hybrid power – with electric driving capability – just makes more sense and seems to sync better with that key brand characteristic. In saying that, we are absolutely grateful to have both options available in Australia as we normally miss out on one or the other.

CONS:
– Performance is a bit behind equivalent Euro rivals
– Boot space slightly down on Euro rivals
– Price goes up well against the competition but is $10k more than predecessor