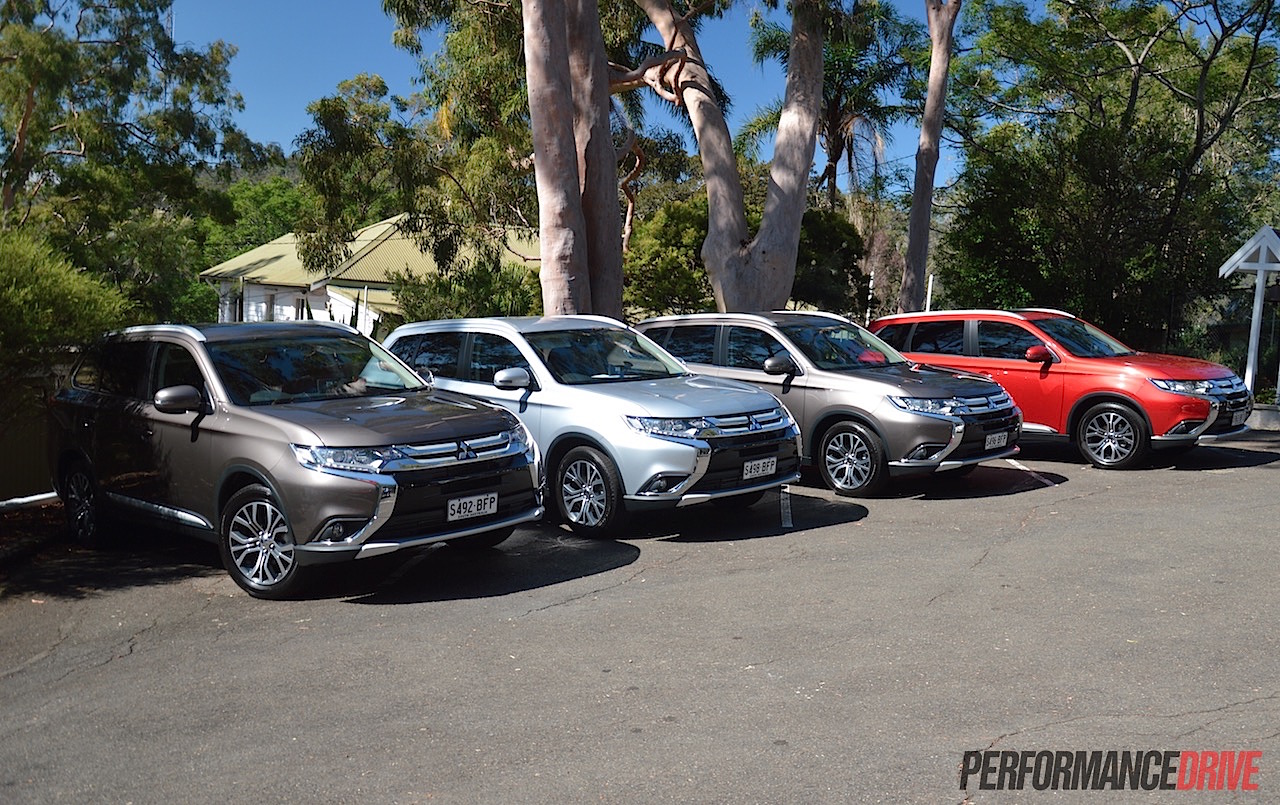 Despite being “re-engineered from bumper to bumper”, according to the Mitsubishi president and COO, the 2016 Outlander looks pretty similar and comes with the same powertrains as the outgoing version. However, there are a few surprises thrown in which could make it one of the better packages in this competitive segment. 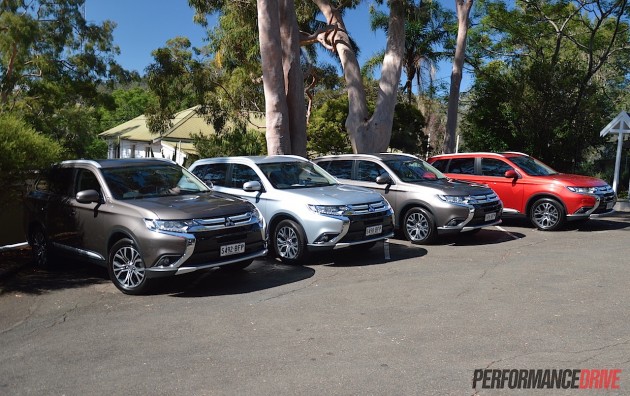 Firstly, the prices for most variants haven’t been lifted for the MY2015 version. And for the ones that are, it’s only a maximum rise of just $750. This is one of the best points about the 2016 model, making it more attractive than ever. Let us explain.

Mitsubishi has made 39 different changes to the body, chassis and suspension to bring down overall noise, vibration and harshness levels (or NVH as it’s called in the industry). This means the cabin is noticeably quieter and more refined out on the road compared with the outgoing version. All of this additional engineering would have no doubt involved a hefty investment.

During the official Australian launch here in Sydney, we were able to take the XLS and top-spec Exceed for a decent drive through the national park. Some parts of the road were in rather poor condition, with potholes and a shabby bitumen surface not doing any favours for vehicle rattles and body composure. Even so, the new Outlander masks jolts and shuddery noises relatively well, and certainly better than the previous model. This results in a quieter and more pleasant cabin. So that’s a green tick there. 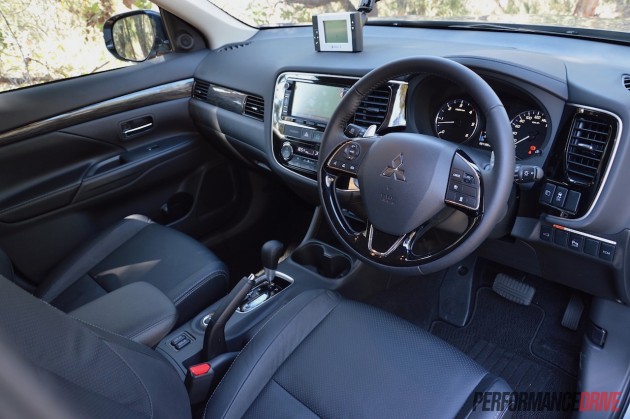 Around the corners it feels tighter and more direct too. However, the suspension calibration does need some attention in terms of absorbing nasty bumps. It can be jittery, especially over corrugations. For us, it seems like this is a side-effect to eliminating body roll. There is now very little body roll compared with the predecessor, which does improve overall agility and handling. Engagement through the steering wheel and chassis is also heightened. But again, you do have to deal with a firmer ride.

In terms of performance, Mitsubishi hasn’t made any changes to the engine lineup. There’s a 2.0-litre petrol for the LS producing 110kW and 190Nm, a 2.4-litre petrol developing 124kW and 220Nm, and a 2.2-litre turbo-diesel kicking out 110kW and 360Nm. The 2.0-litre petrol gets a five-speed manual or CVT, while the 2.4 is only available with a CVT, and the diesel gets a six-speed automatic. 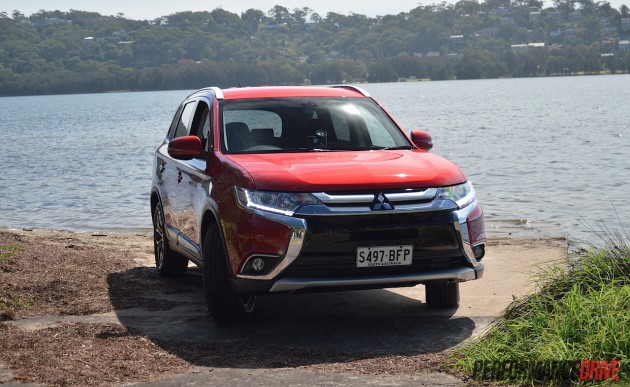 Out on a winding road we enjoyed the touchier throttle in the diesel. It now feels readier and more willing to tackle steep ascents, and you don’t have to push the pedal into the carpet just to overtake. You simply give the throttle a light feather and it’ll respond. As a result, it does feel quicker and more energetic overall. It feels like it produces more power and torque.

As for economy, we can’t really provide any substantial evaluation on that with a one-day drive, but the official figures are certainly a good sign. (The trip computer showed a history average of around 9.5L/100km in the diesel, which would have included lots of exuberant journalist driving.) So that’s another green tick.

Lastly, Mitsubishi has revised the trim lineup so buyers now get more for their money. Three variants make up the range, spanning from the LS, XLS to the Exceed. The LS and XLS are available in two-wheel drive, and all can be had with four-wheel drive. Seven seats are standard for the XLS and Exceed (excluding 2.0L 2WD XLS).

All variants come with new 18-inch alloy wheels, a reversing camera, LED daytime running lights, and climate control. Going for the Exceed gets you adaptive cruise control, leather seats with heaters in the front, a sunroof, and various other luxury-focused trimmings. 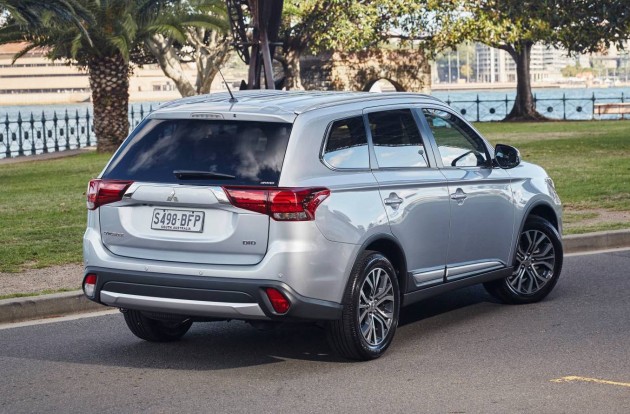 If you’re in the market for a mid-size SUV, there’s no doubt the new Outlander is a sharper, better-equipped and more refined package. It’s not quite an all-new model, but instead, it’s a worthy refresh on an already competitive product. So far this year Mitsubishi has sold 2018 Outlanders in Australia, giving it a 6.8 per cent market share. It’s the eighth most popular vehicle in the segment, up against 16 other main contenders according to VFACTS.

We aim to put together a more in-depth review and performance video in the near future. In the meantime, check out our quick POV overview and test drive video below.

The 2016 Outlander is on sale now, with prices starting from the following (excluding on-road costs);