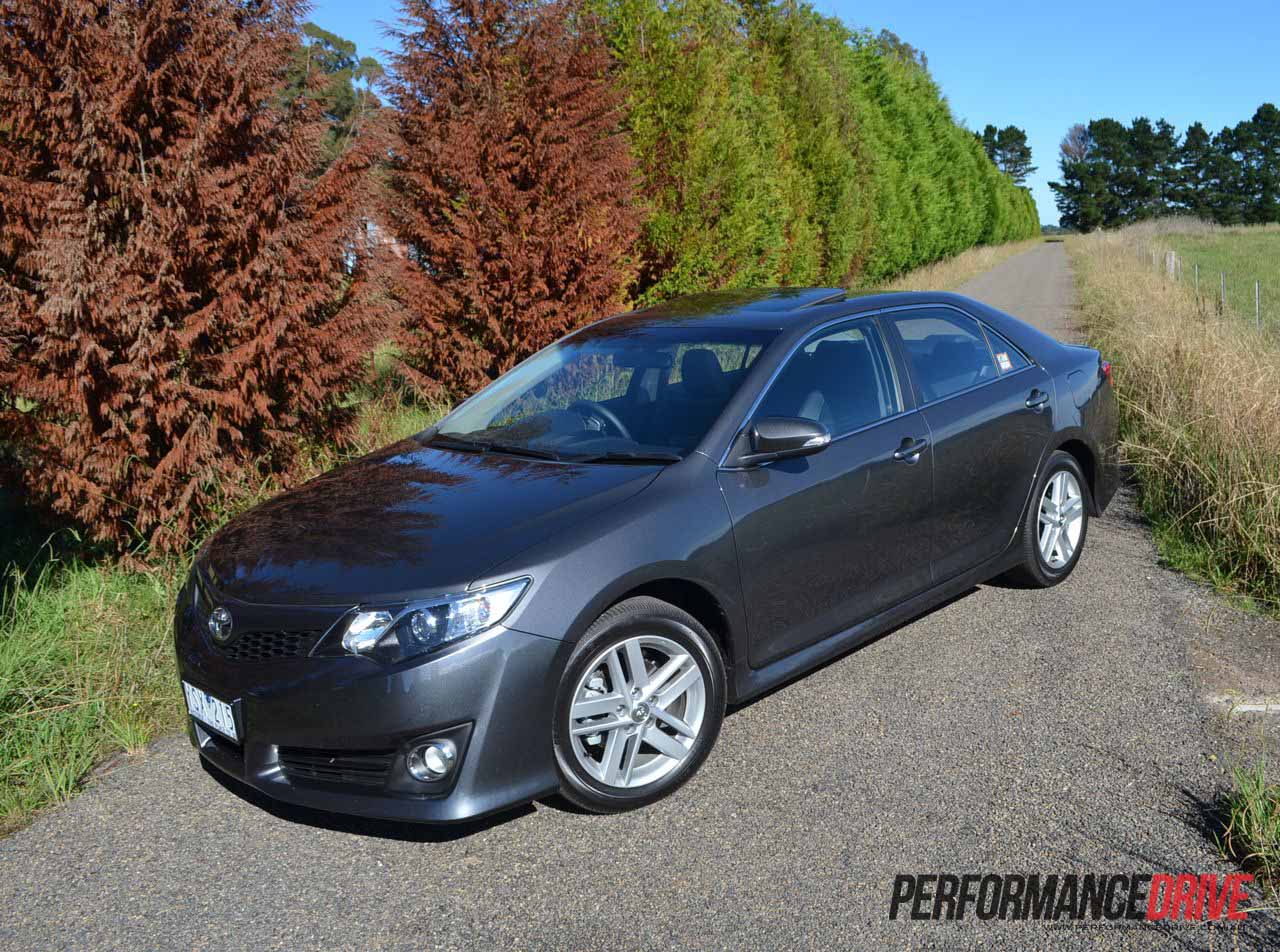 This is the new 2012 Toyota Camry Atara SX. It’s not technically an all-new model, as the platform is mostly the same as the predecessor’s, however, the sharp styling is a complete update. It also gets a fresh, more powerful and more fuel-efficient engine, a more modern interior, while overall dynamics are also improved. 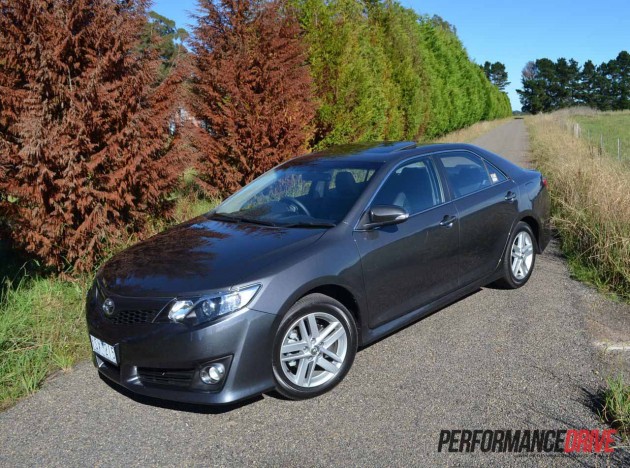 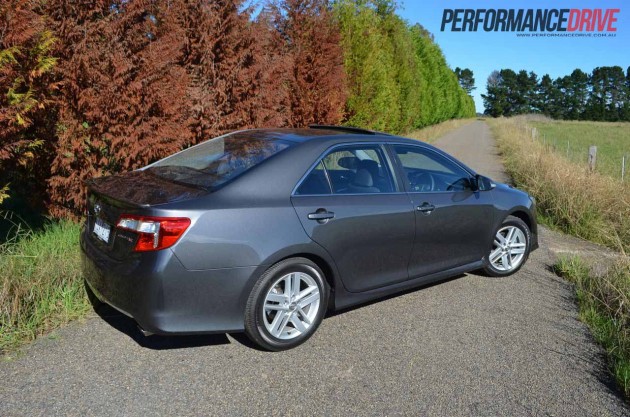 The Atara SX is the new ‘Sportivo’ variant, sitting one under from the flagship Camry Atara SL. It gets sporty styling enhancements, such as a flared bodykit and a boot lip spoiler, sports suspension, and a number of distinguishing highlights inside, such as two-tone leather, white stitching, and sports seats. It also comes with the new 2.5-litre four-cylinder engine producing 135kW and 235Nm.

The Camry might not be the first car you think of when trying to decide what sports sedan to buy; Camrys are normally notorious for their boring and characterless personalities, and rather bland interior layouts. For years it’s been hard to argue with official sales figures though. Right now the Camry is the most popular medium-sized sedan on the market, and it has been for almost 20 years.

Buyers love the trustworthy character, the reputable packaging, the space, and the fact that variants are relatively cheap ($35,990 for the SX). Toyota is looking to add a bit of spice to the loyal ingredients with this new model, and has said that during development it aimed to create something that was emotional and rational. 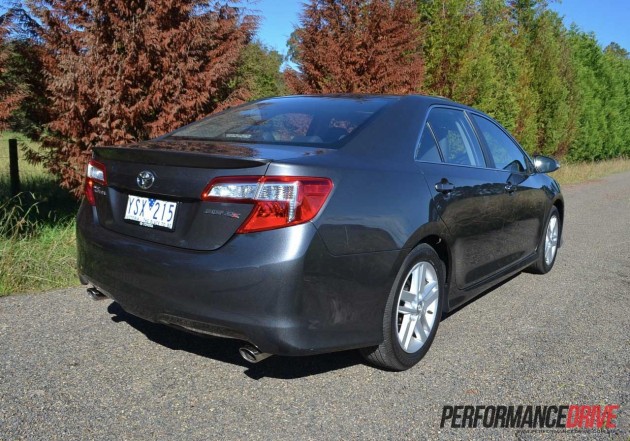 Inside, the 2012 Toyota Camry Atara SX is a big step forward from the previous generation model. There’s actually a bit of flare and pizazz about the place. The SX variant features a semi-leather-covered dash with white stitching. It’s not much but it gives the cabin environment a touch of class compared with a big mono-tone plastic dash.

Adding to the flare are stainless-steel-look inserts in the dash, carbon-look trimmings on the doors, while in the centre fascia sits a 6.1-inch LCD multifunction interface. Unfortunately, satellite navigation is optional. The screen handles everything from playing music from a USB stick, to displaying the rear-view camera when reversing. 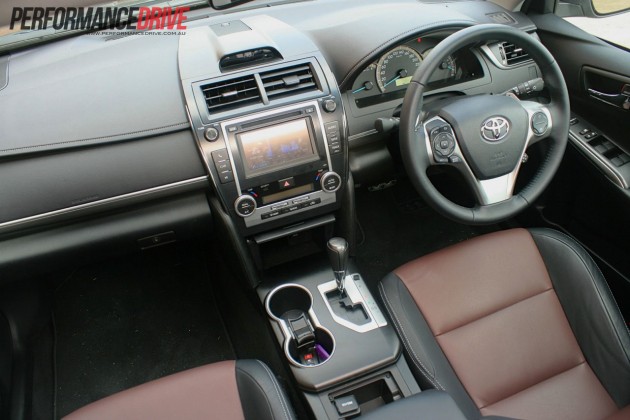 The sports leather-accented seats on the SX are comfortable (electrically adjustable for the driver), although, one of our taller staffers found them to be slightly on the hard side. This might be due to the car only having done 2000km. They aren’t the largest chairs you’ll find in a family sedan either. For smaller types though the seats offer good lateral support and ample cushioning. And match well with the sporty theme.

Overall vision in the Camry is excellent, while the large proportions are seldom too big to handle or to thread through tight streets and traffic. Speaking of size, we found the rear seats to be some of the most accommodating in the segment – this side of a limo or Fairlane/Statesman – there’s heaps of room in the back with separate air-con vents providing great comfort. 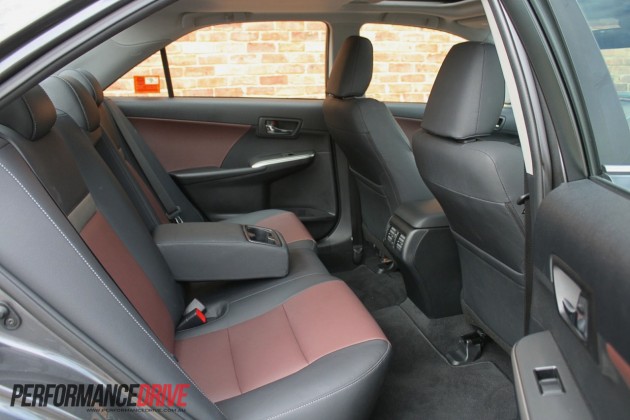 The Camry is and always has been designed to be easy to live with, and it succeeds in that very well. You get used to the layout and controls in the cabin almost instantly, and nothing is confusing or overwhelming. This is the trait loyal Camry owners will love. While keeping those happy though, the new styling certainly has the potential to bring in some new buyers with its smarter design cues compared with the previous model.

Although this is the sporty SX model, the exterior is subtle, and doesn’t go over the top in any one area. The front end is aggressive, while the bodykit is neat and matches the new design language, with sharp and modern contours. There’s also black highlights in the front end, such as a mesh grille and foglight surrounds, giving off a mildly stealthy look. 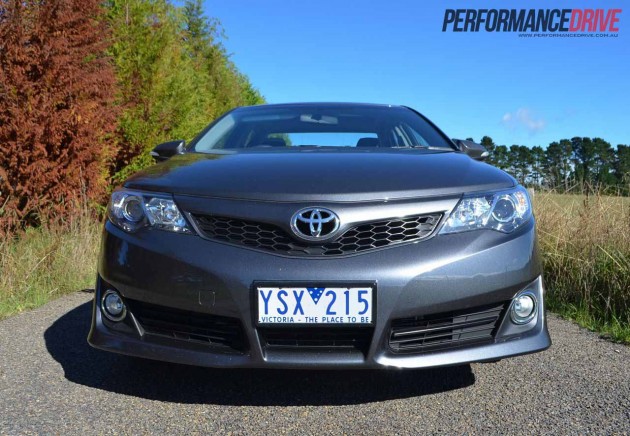 Ensuring the new Camry keeps up with today’s standards and to ensure a maximum five-star ANCAP safety rating is maintained, the 2012 Toyota Camry Atara SX comes with traction and stability control, seven airbags (knee airbag on driver’s side only), and electronic brake distribution with ABS. ANCAP has awarded the 2012 Camry the full five stars.

As we mentioned at the start, the Camry is not a vehicle that normally attracts those in the market for a sports sedan. There’s something about this new model that has the potential to change the perception though. The same reliability and friendly characteristics are there, but signs of attention to detail we notice has pushed it up a notch. 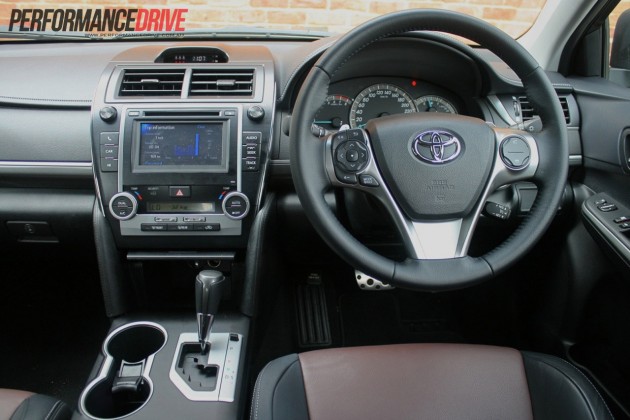 The transmission, for instance, is a six-speed automatic. It works very well, like all Toyota gearboxes, and chooses the right gears for you at the right time. There are paddle shifters behind the steering wheel, which, when flicked, put the Camry into manual mode. If you then push the gear lever over into S mode, the paddle shifters prompt an engine blip on the downshifts, matching the rpm to the vehicle and gear speed.

This is the kind of technology normally only associated with more serious sports and supercars. There are many cars we’ve driven recently that have paddle shifters, but they do not go to the extent of offering engine-blipping. It basically shows Toyota is not simply slapping paddles on as a cheap gimmick; the company has gone that extra step.

The same can be said for the suspension, which consists of Macpherson struts front and rear. The setup handles everything from speed bumps to hard cornering very well. We really leaned on it around some tight twisty bends in the mountains, and the chassis wouldn’t give. Even during cornering and bumps, the outfit stays composed.

Unfortunately, the steering doesn’t match this eagerness to play. Although it is an improvement on the previous model, it uses an electric-type power steering system. It’s fairly dull, to say it bluntly. We fear the engineers tried to keep mums and seniors happy with the slow speed steering ratio, and, at the same time, tried to keep active sporty drivers happy but didn’t quite get it right. 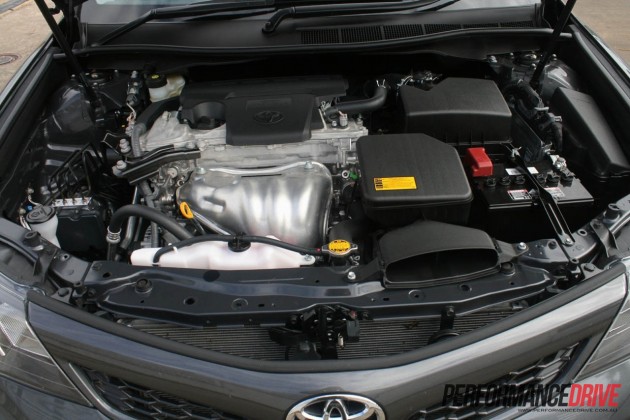 Under the bonnet, the 2.5-litre four-cylinder engine is comfortable revving right out to 6000rpm. It’s quiet and refined in doing so too. Acceleration won’t have you reaching to brush your hair forward after hitting the throttle, but it shifts you along at a respectable rate for a medium-size sedan.

Overall, the Camry seems best when it’s up to speed, where it provides a very quiet and smooth ride, perfect for highway cruising, or higher speed country runs.

The new Camry is an interesting one. We spoke to a previous-gen Camry owner recently, and they told us they will be buying this new model and probably won’t even take it for a test drive; they trust the vehicle and the brand so much they simply know what they’re going to get.

In that respect, the new Camry is almost like an iPod. There’s plenty of MP3 players out there that do the same thing, and may even do some things better, but the iPod just has that renowned quality about it; everyone’s got one because you just know it’s going to do its job well.

If you’re after a dedicated sports sedan, we suggest looking into other options. But if you’re after a taste of that loyal character and reliability, and would like a touch of genuine sportiness, the 2012 Toyota Camry Atara SX could be right down your alley. It’s cheap to run – we averaged 7.7L/100km, it accommodates five adults very well, and it now comes with a hint of class and style. 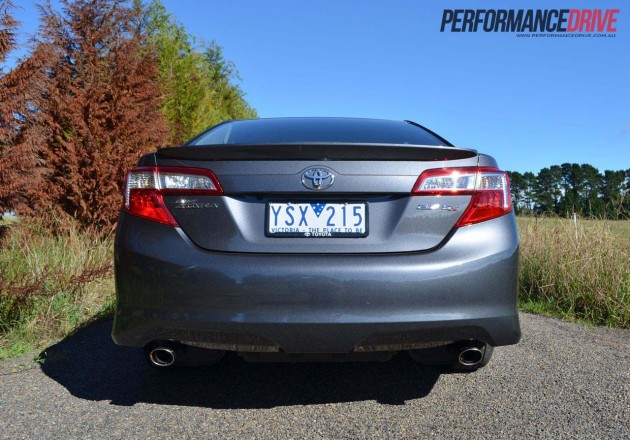 2012 Honda Accord Euro – 2.4-litre petrol four cylinder, 148kW/230Nm – 1605kg – from $29,340
The Honda Accord Europe is one of the top contenders in the medium sedan segment. It comes with a smooth VTEC engine, plenty of power, and sits in the segment as one of the smartest-looking designs.