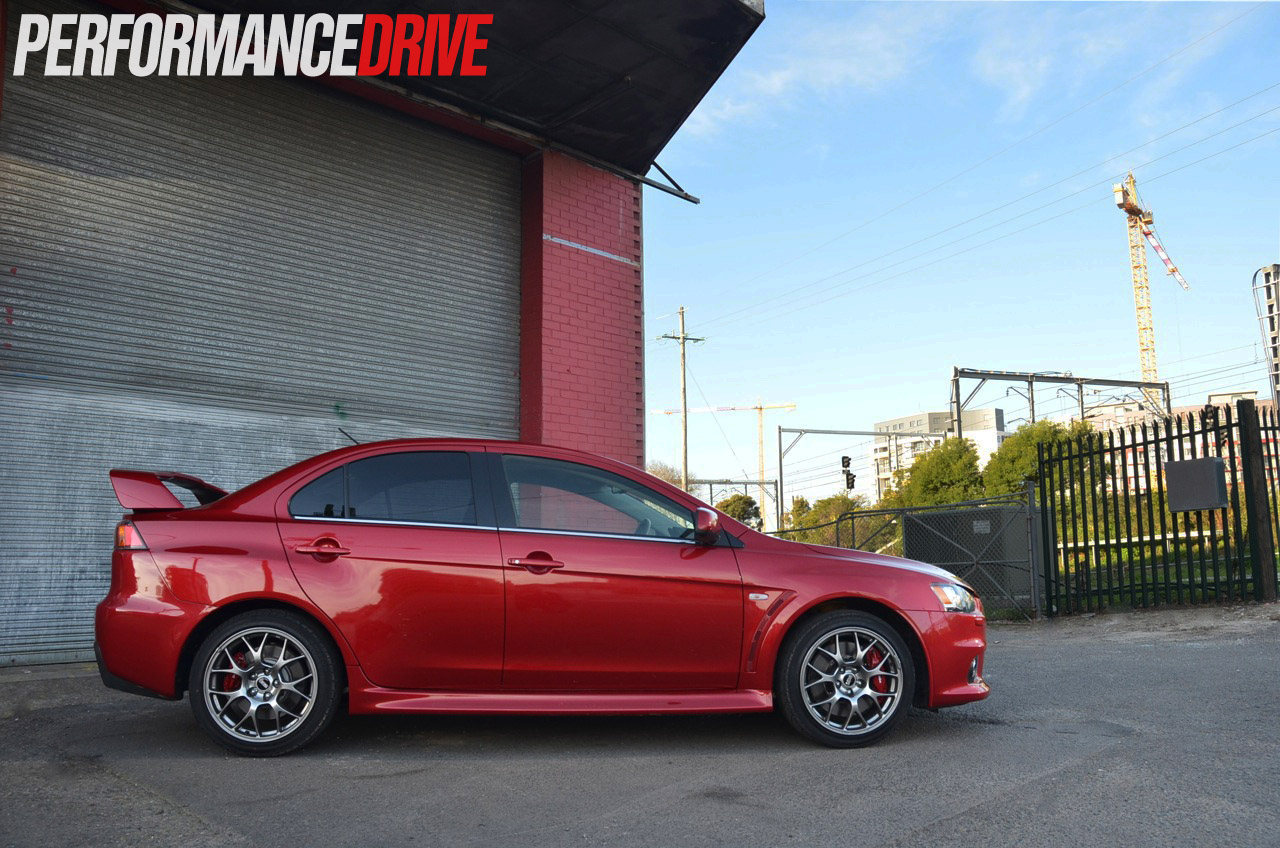 The 2014 Mitsubishi Lancer Evolution X MR sees the current-generation CJ chassis carry on into its sixth year of production. It uses the same 2.0-litre turbo four-cylinder mechanical weaponry as it did when it was launched back in 2008, which leaves us wondering, does it still have the mechanical prowess to outgun its opponents? Well, that’s what we’re here to find out. 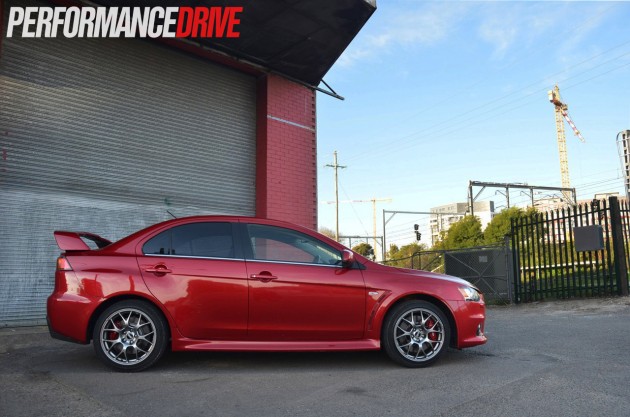 Engine-wise, the all-alloy turbocharged 4B11 engine remains unchanged for 2014, producing 217kW and 363Nm. 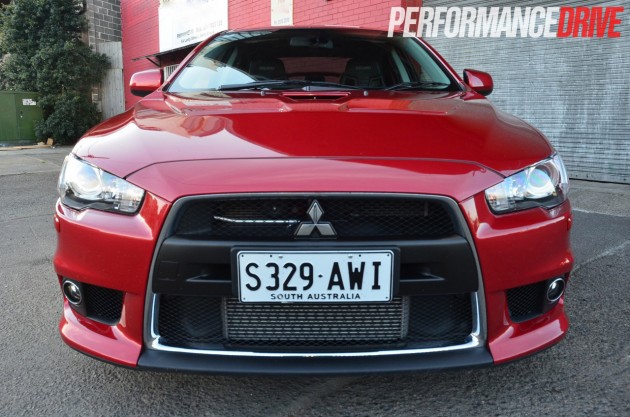 The Evolution X MR is equipped with some of the biggest brand names in performance ammunition. Brembo brakes sit at all four corners, as do lightweight 18×8.5-inch BBS wheels.

Leather trim is standard, with a beefy pair of Recaro seats for front occupants. These racy items can be a tight squeeze if you’re big boned.

It would be almost impossible to mistake the Evo X for a base model Lancer. The huge rear spoiler, sleek front bumper and side skirts, functional bonnet vents, and the rather large rear diffuser with duel exhaust outlets let other motorists know this car isn’t to be fooled with. Aimed at keeping weight to a minimum, the Evolution X features an aluminium bonnet, front guards and roof.

The Evo X is available in five different colours; Starlight (white), Titanium (dark grey), Phantom Black, Red, and returning to the MY14 range is Lightning Blue.

Sit inside the Evolution, and it doesn’t take long to feel like you’re in a mid-2000’s runabout. The dash isn’t all that pretty and the switchgear and overall style of the cabin is starting to look very yesterday. That said, the functionality of everything is excellent and easy to navigate. 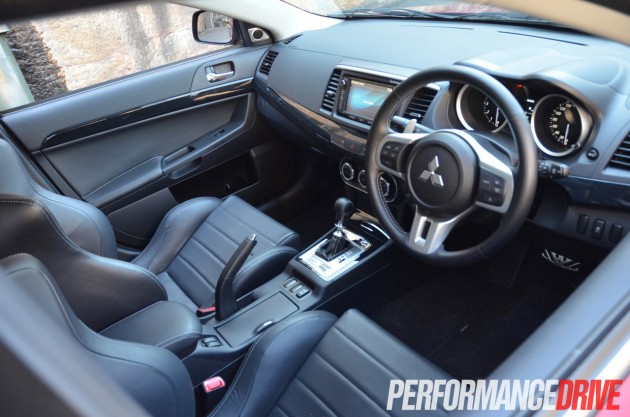 The Evo isn’t just a gung-ho sports car, either, it’s actually quite a handy everyday car. There’s enough room for five occupants, though four is a much more comfortable option, plenty of little spots to put things like a drink bottle and a handful of change, and has all the creature comforts you’d expect in a top of the range model like climate control and heated front seats.

The seven-inch touchscreen with built-in satellite navigation as standard is a peach. The screen is also used to display the reverse camera and to control the very impressive nine-speaker Rockford Fosgate audio system, which features Bluetooth, USB, and aux-in connectivity. If you like bass, the factory sub-woofer mounted in the boot will definitely get you bopping.

Given the Evolution’s performance-focused approach, it’s reassuring to know it comes with a five-year/130,000km vehicle warranty, which includes five-year roadside assist and capped servicing for the first four years or 60,000kms, whichever comes first.

The Lancer Evolution comes with an array of safety features too, such as active stability control, traction control, anti-lock brakes, and ISOFIX child seat anchor points. The cabin is fitted up with no less than seven airbags. ANCAP is yet to crash test the 2014 Lancer Evolution X. 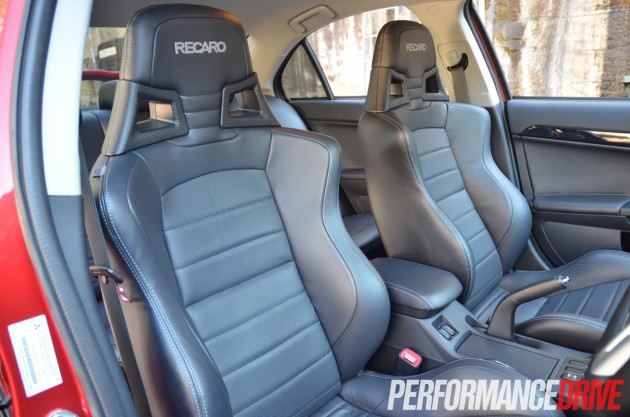 Point, shoot, and fire. The Evolution Lancer best finds its feet when driven as the engineers intended – flat out. While this isn’t possible on public roads, you can still have fun barreling the X MR around a tight set of tarmac (or dirt) twisty roads. The driving position is snug, allowing you to feel at one with the car when you’re upping the ante.

Don’t jump in expecting it to rip you back in the seat in acceleration. The Evo X delivers its power so smoothly you’ll find yourself opening the bonnet to see if the turbo is connected. It’s not that it’s slow, it’s just very linear. Whereas the Evolution IX Lancers had some turbo lag, the Evo X doesn’t.

This can make the driving experience a touch on the boring side. There’s no enticing pops, rumbles, or crackles from the exhaust, rather just a whoosh sound at full throttle and a slightly deep tone if you enter an underground car park.

The TC-SST around town couldn’t be more smooth if it tried, changing gears unnoticed – no doubt in the name of fuel economy. However, things change as soon as you notch things up a level and hit a back road.

The gearbox features three modes of engagement; Normal, Sport, and Super Sport. Normal is for the daily duties while Sport livens things up with slightly faster gear changes and acceleration. Super Sport makes for even faster gear changes so you can extract every last drop of performance the Evo has to offer. In all modes you can opt to let the car shift itself or use the flappy paddles behind the steering wheel for manual mode. There’s also a plus and minus action on the shifter if you flick it to the left while in drive.

If you love all-wheel drive grip, you must drive a Lancer Evolution once in your life. Grip is something Mitsubishi has mastered over the years, and the S-AWC system is about as good as it gets. It allows you to keep your left foot pinned a lot more than you think is possible. You can sense the car starting to hug the road the split second you apply a load of throttle when cornering. 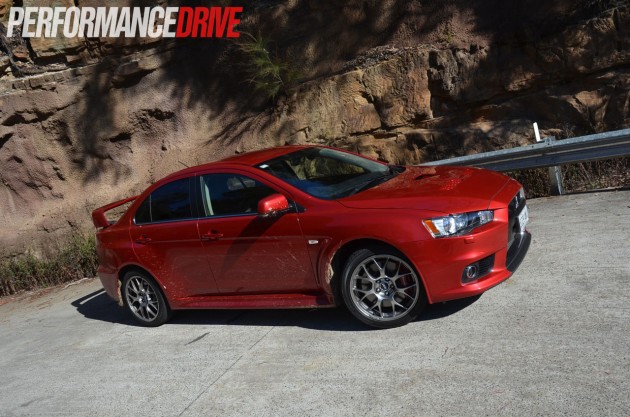 The S-AWC is assisted by the ACD (Active Centre Differential) which determines the optimum torque split between the front and rear wheels. Three modes decide how the torque is shared around; tarmac, gravel, and snow. While some of the Evo’s systems sound overly complicated, they work harmoniously at providing nothing less than impressive performance and grip over various conditions.

The suspension tune in the MR model is quite firm, and can get quite annoying when you’re using the Evolution to simply commute. Flip the coin and the handling becomes race-car-like should you find a road to rocket up, maintaining excellent composure and steering feedback even when bumps and pot holes get in the way.

One cool feature with the Evolution X MR is launch control. All you need to do is select Super Sport, turn all the safety settings off, select first gear using manual mode, place your left foot on the brake, flatten the accelerator, watch the revs dial up 5000rpm, and dump the brake pedal. Once you complete these few tasks, the blood in your brain will shoot to the back of your skull and it’ll launch off into the distance – just don’t forget to grab second gear before redline. It’s certainly a useful feature if you’re planning on entering any hillclimb or targa-type events.

There are a few things about the Evolution that let it down in our books. The first is the dreadful turning circle. Three-point turns will often become five-point turns. The steering is razor sharp when you’re up the mountain giving it a lashing, but it’s downright painful when you need to pull a quick u-turn.

The second annoying thing is its woeful fuel consumption when driven even slightly active. We found it hard to return under 14L/100km. If you drive it hard, that figure can blow out to high 16s – possibly even worse. While we can hear the cries ‘but it’s a performance car’, there’s loads of performance cars on the market that use much less, yet offer loads of tarmac-chewing fun. Perhaps this is the one thing that shows the now six-year-old car’s age when compared with the latest in sports car engine technology. 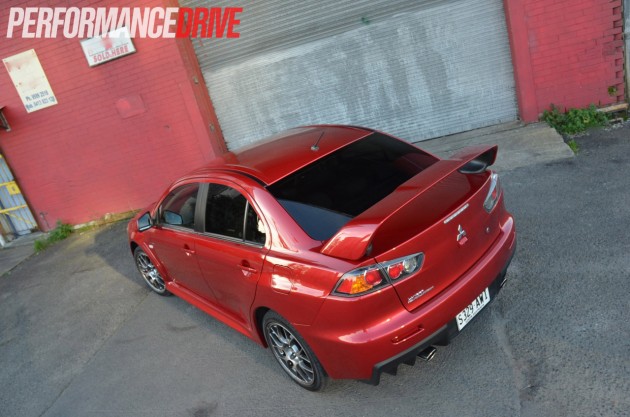 The Evolution so effortlessly mixes practical with performance. Once you get used to the snug front seats, the terrible turning circle, and the bumpy ride, the Evolution starts to make sense. This is a serious sports car that has years of motorsport running through its veins, yet your mother in-law could borrow it to drop the grandchildren at school.

To drive, the Evolution X doesn’t feel behind the times performance-wise even though it’s edging on seven-years old. However, its poor fuel economy, dated cabin, and slightly aging exterior looks (it looked ahead of its time when launched) don’t do it any favours, especially when some of its competitors are more powerful, can sprint from 0-100km/h in under five seconds, and return fuel economy in the six-figure bracket (see competitors).

It’s nearing on time for an Evolution XI.

CONS:
– Less than satisfactory fuel consumption (upwards of 14L/100km even when driven easy)
– The ride will be too firm for some
– Atrocious turning circle
– Seats aren’t kind to people with a touch of ‘padding’
– Pretty much the same car six years after it was launched 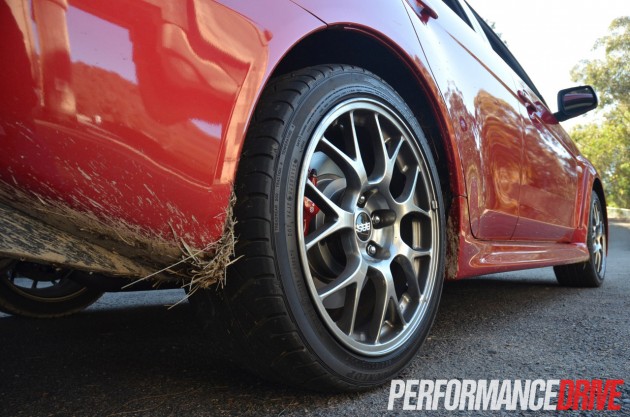