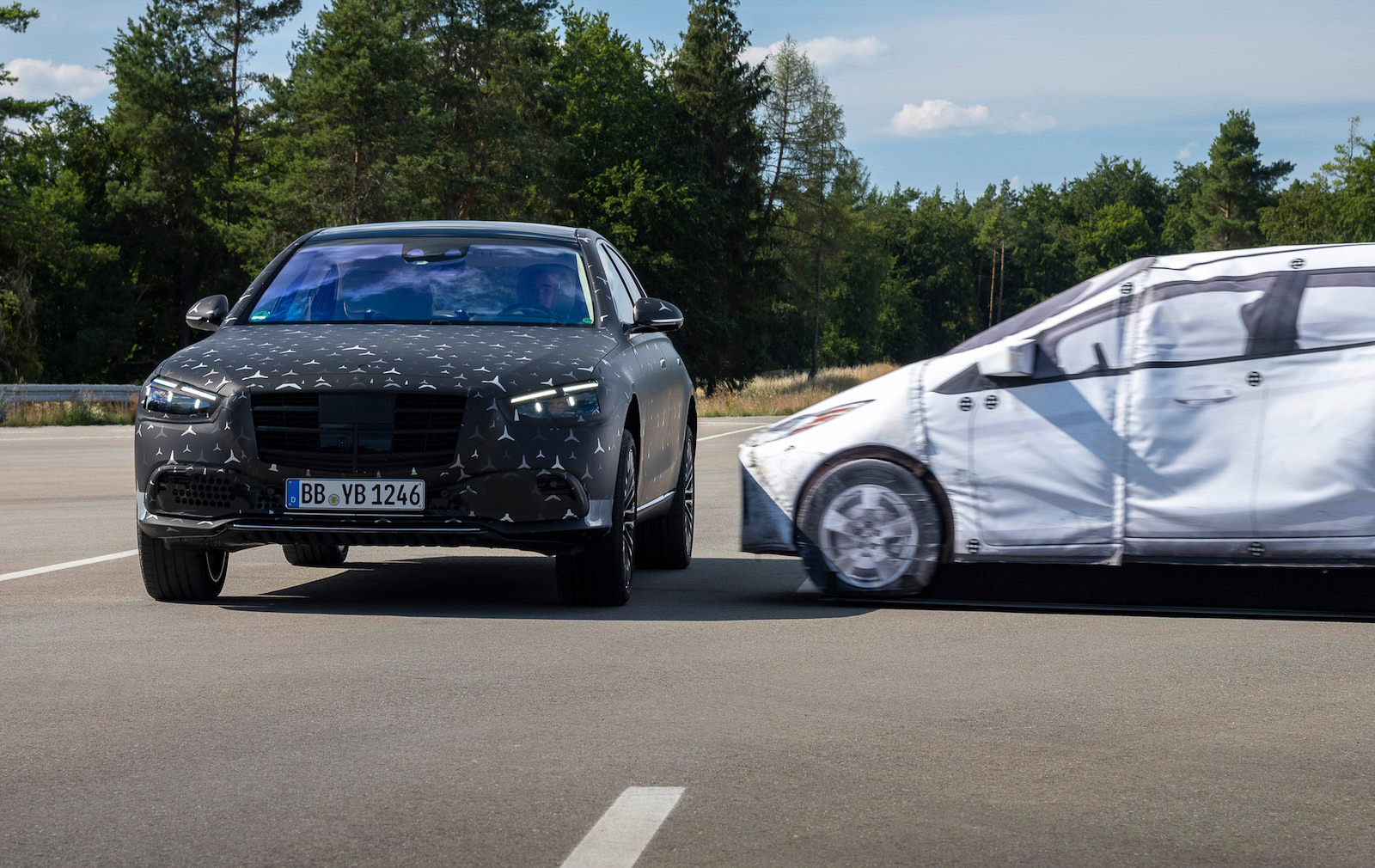 Wonder what the future holds for motor vehicle technology? The Mercedes-Benz S-Class is usually a good place to start. And now some fresh information has been released regarding the 2021 model, including details of the advanced driving and safety features that are in store. 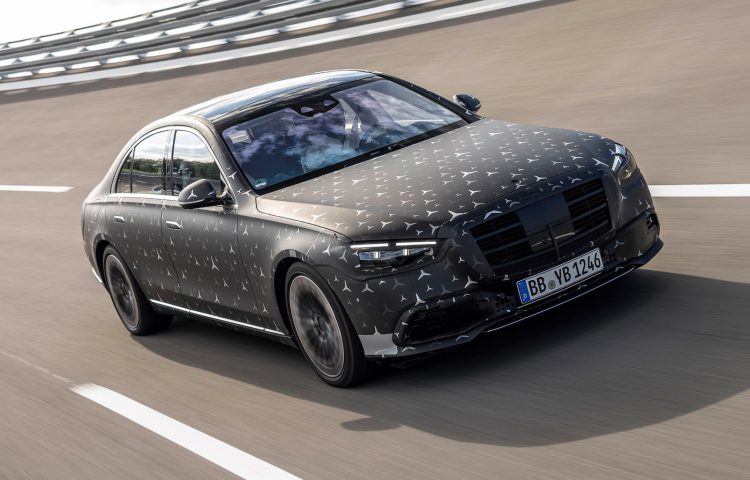 Usually we’d have to rely on spy photographers to get a glimpse of upcoming models. But Mercedes-Benz is saving everyone the hassle by releasing some of its own photos showing a prototype during testing. As usual, the prototype features camouflage and black sheeting to conceal the design.

But judging from what we can see, the new model is set to welcome a big new front grille which extends wider than the current setup, with sporty sculpting down below. It also appears to be quite a clean design, with soft panel contours and not many crease lines. Even the lower skirting is all very clean and consistent. 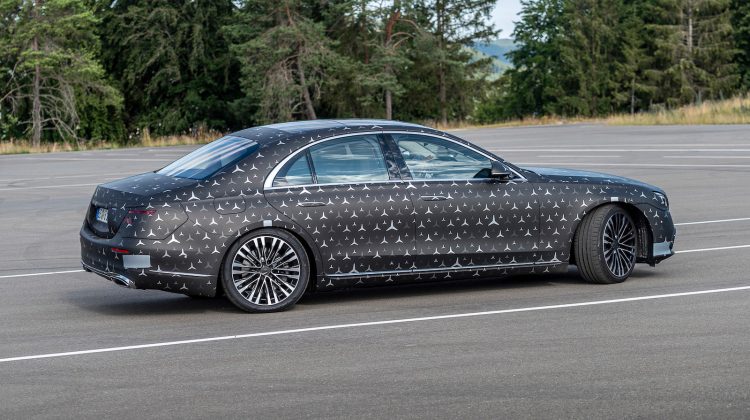 The S-Class has never really been about design, but more about being the epitome of luxury and driving safety. And so Mercedes is looking to raise the standard once again with this all-new model by introducing a range of all-new technologies.

One of the highlights is an E-Active Body Control system for the air suspension. It infuses hydropneumatics into the ride control, with air springs taking the weight of the vehicle and regulating the level, while the hydropneumatics provide dynamic forces and actively control the body. Mercedes-Benz explains:

“At each wheel, a damper is installed within the axle whose two working chambers have an adjustable damping valve and a hydraulic pressure reservoir. The damper is connected to an intelligent motor/pump unit in the 48 V network by hydraulic lines. Actuation of the motor/pump unit enables the hydraulic fluid to be displaced to create a difference in pressure within the damper, allowing an active force to be generated.” 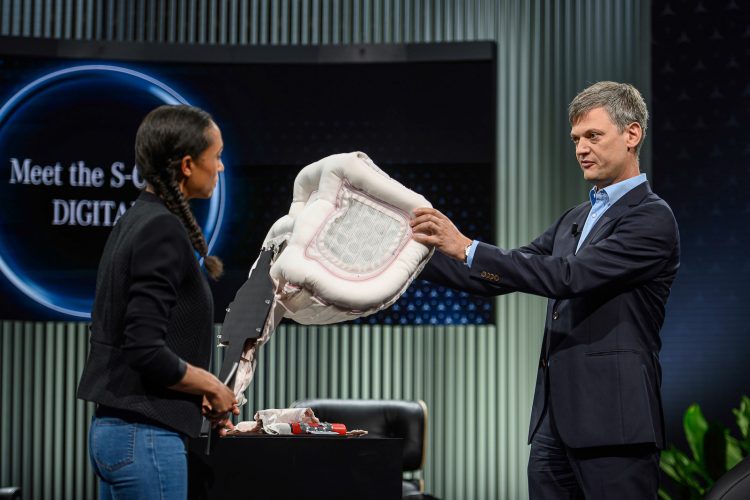 Another ground-breaking tech is a world-first frontal airbag system. Essentially, a face/head airbag which deploys for the outer rear seat passengers. During severe frontal crashes a tent-like airbag is deployed, inflated by the surrounding air via specially patented one-way valves in the skin. Mercedes says the airbag is designed to enhance the restraining effect of the seat belt system, including the beltbag and inflatable seat belt.

Also in airbag technology, the company has devised a special airbag that deploys between the two front seats. This aims to reduce the risk of clashing heads during severe impacts. It’s integrated in the back of the driver’s seat. 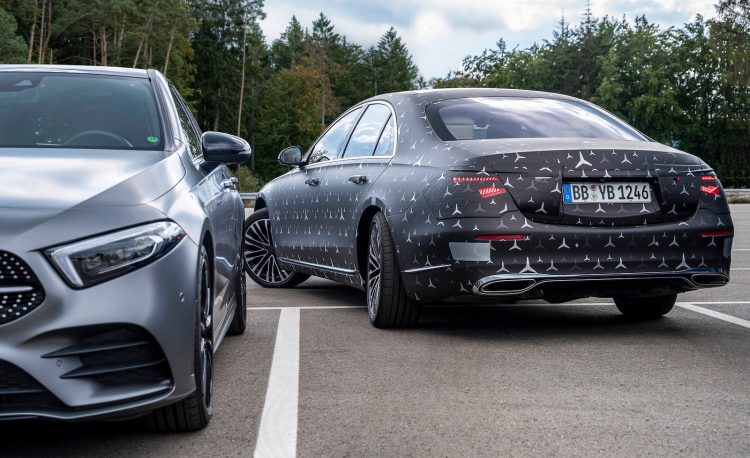 Lastly, there’s a new rear axle steering system coming in. It uses a spindle which is driven by an electric motor via a drive belt. The rear wheels are turned in the opposite or same direction as the front, depending on the speed (around 60km/h). An angle of up to 10 degrees is possible, helping with parking.

Some other new safety systems will also be introduced, such as a Pre-Safe Impulse Side system which quickly raises the body of the vehicle (by up to 8cm) just before an impending side collision. This directs the impact to stronger sections of the vehicle. There’s also illuminated belt buckles coming in to make them easier to find at night, and a new MBUX Interior Assistant feature including a camera that can monitor child seats.

The 2021 Mercedes-Benz S-Class is set to debut later this year, with sales in Australia expected some time next year.