Here’s a hatch that’s ladden with kit, performs well, uses bugger all fuel, and even parks itself. It won’t make you dinner, but the 2013 Ford Focus Titanium TDCi MKII will do just about everything else you ask of it.

All Titanium models (and all diesels for that matter) are only available with a six-speed automatic transmission.

The MKII Focus we are testing here was built in Thailand (as are all 2013 models), whereas the 2012 Focus Sport we reviewed last year was made in Germany. Ford decided to shift the manufacturing to the Asian country in 2012. 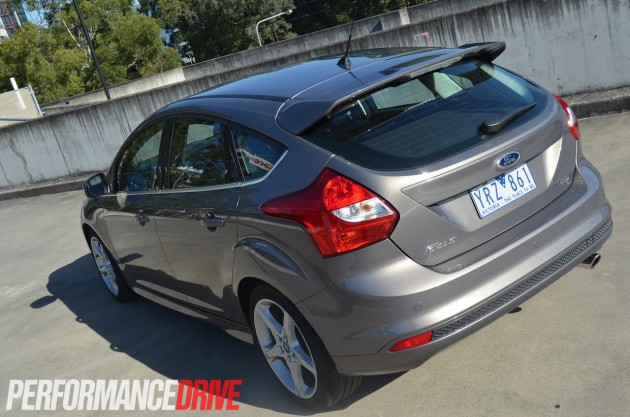 The five-seat hatch offers more than you expect. It comes with high-tech features such as a self-parking system, parking sensors, optional radar-guided cruise control, and a proximity key for added convenience.

Front occupants are treated to ample head and legroom and a very comfy pair of heated front seats, with a power driver’s seat. There’s also dual-zone climate control, and a nine-speaker Sony audio system, which features USB, Bluetooth and aux-in connectivity. Take it from us, the stereo packs quite a punch.

Rear occupants get a bench seat, while a little flat, that offers good comfort for day trips. The one thing that could get annoying is the rear seating space; it could do with more leg and headroom, and sits about average for this class. You can fit a baby seat in the back, but forward facing units will need to be placed in the middle to ensure they have enough legroom.

The Focus offers two cup holders up front and two in the rear, with some cubby holes and coves to store phones and wallets and so on.

Overall the cabin is a nice place to be, but the dash looks overcrowded with too many buttons and colours going on. This can become frustrating when you’re on the go and just want to change something as simple as a song. It’s something you really need to get used to.

For those who’re keen, there’s the option of using the voice command system (button located on the steering wheel) to make changes to things like climate control, the radio station, or song choice, a lot easier. It’s quite good at understanding your request in one take, most of the time.

The Focus comes with a three-year 100,000km warranty. Servicing for the diesel Focus is every 12 months or 15,00kms, whichever comes first. The cost of the first three services are capped at $335 each.

Safety-wise, the Focus Titanium scored 34.17 out of a possible 37 points in recent ANCAP crash tests, giving it the maximum five-star rating. It comes with driver and passenger, curtain, and thorax airbags. It also comes with dynamic stability control and traction control. 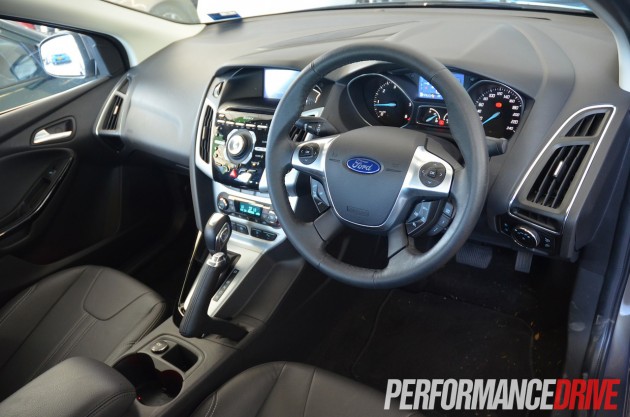 The turbo-diesel produces petrol hot hatch power figures, and goes like one, albeit with much more torque on offer. The benefits of a diesel is that peak torque is available from just 2000rpm, lasting until 3250rpm. The gap between those rpms is where the Focus makes the most ground, pulling clean and strong.

The dual-clutch six-speed auto is smooth and intuitive in all situations. It never hesitates to find the right gear should you need a burst of acceleration, shifting back to use that excellent torque band. If you want to up the ante there is a sport mode that energises the shift action and holds gears longer. There’s no paddle shifters, but there is a plus-minus button on the lever itself.

The Focus Titanium feels very lively and active to drive. Through a series of corners, the Focus will point and shoot where you want it to go with little to no fuss. Feedback through the front wheels is good, with neutral flat handling, even when the weight is shifted about.

Some of its good handling characteristics are thanks to the sports suspension. It can be a bit too firm at times, and slightly abrupt should you hit a bump or road connection in the city.

Having a brake-based limited-slip differential up front to tackle any wheel spin that may occur gives the gutsy torque curve a chance to translate the power into acceleration. We timed 0-100km/h in a reasonable 8.5 seconds.

The Focus responds well to braking under load and around corners, providing good pedal feel and resisting brake fade. Of course, if you want more sportiness, there’s always the Focus ST. 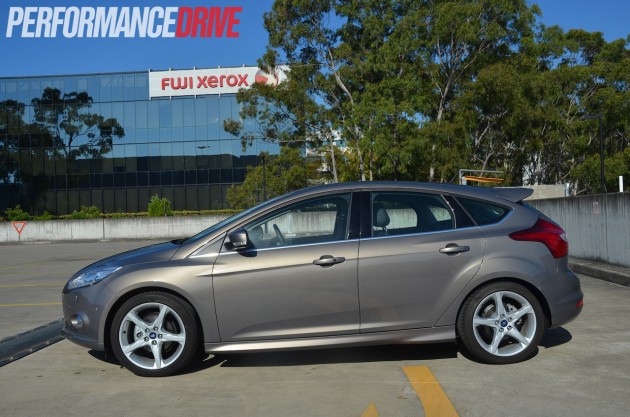 It is a little on the expensive side, sitting only a few thousand from its sportier big brother, the Ford Focus ST. But the 2.0-litre turbo-diesel and dual-clutch auto is an excellent arrangement for power and economy.

If it were our choice, we would definitely go for the diesel over the petrol counterpart. The official fuel economy rating is just 5.4L/100km, and in the real world, we averaged 7.1L/100km.

The Ford Focus is a formidable hatch. The Titanium model adds that extra spark and is filled with loads of luxuries. It looks a peach, too.

PROS:
– Gutsy 2.0-litre turbo-diesel and dual-clutch auto
– One of the most stylish hatches on sale?
– Handling is very good for a luxury-focused hatch

CONS:
– Ride could be too firm for some
– Audio and climate system can be a little confusing to operate
– Rear leg and headroom could be more generous 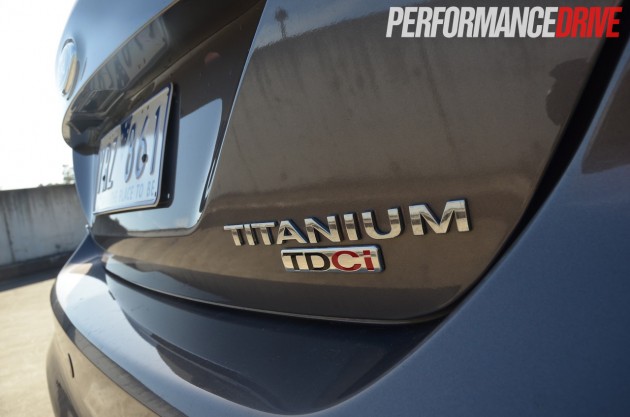