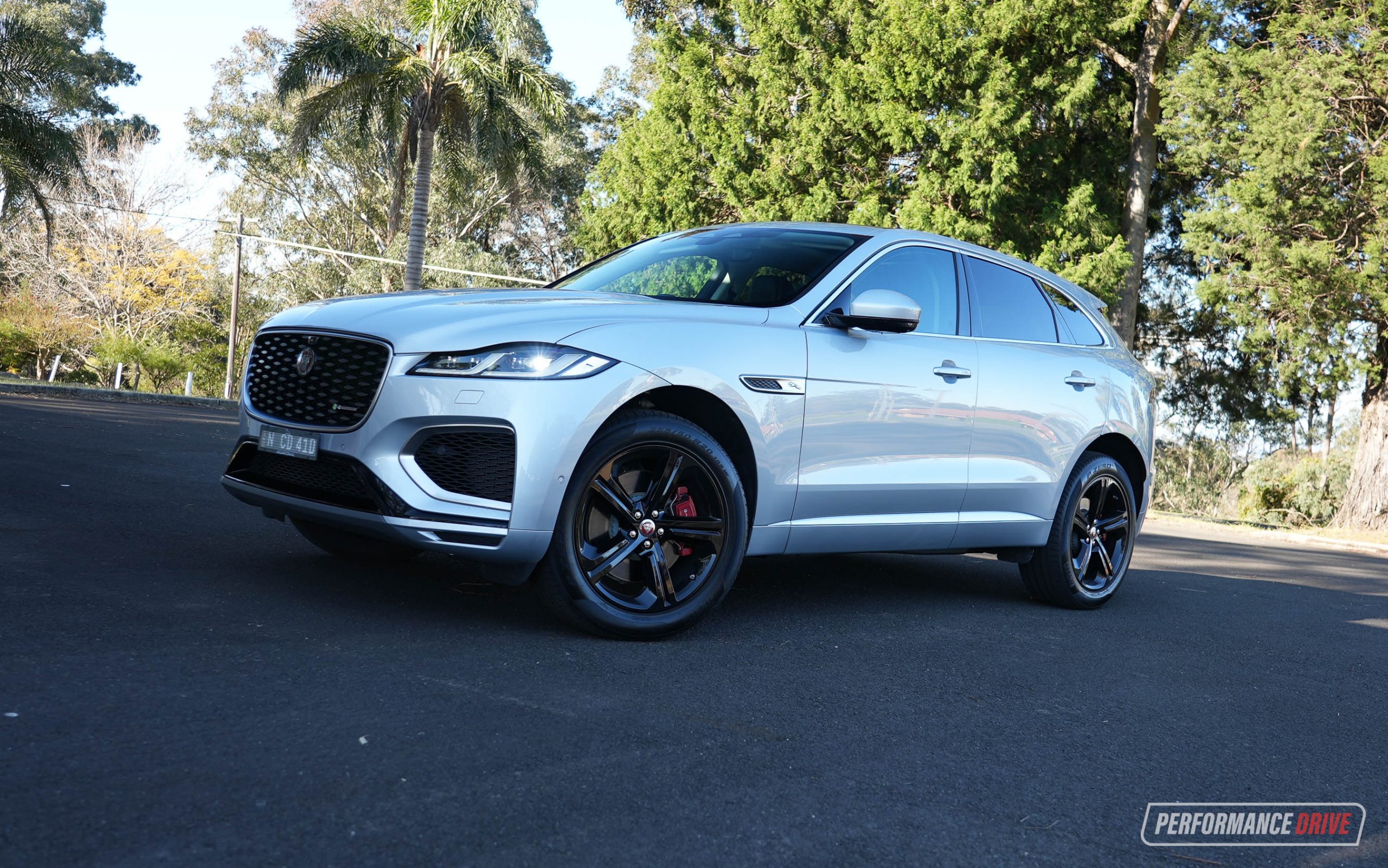 There would not be another brand on the market today that emanates the traits of performance and luxury together in an SUV more than a Jaguar. The F-PACE is the father of the prowl and has been since 2016. Still in the same generation lifecycle, it has been brilliantly facelifted for 2021. So much so that VFACTS reports show sales from January through October have increased by 45.9 per cent over the same period in 2020. 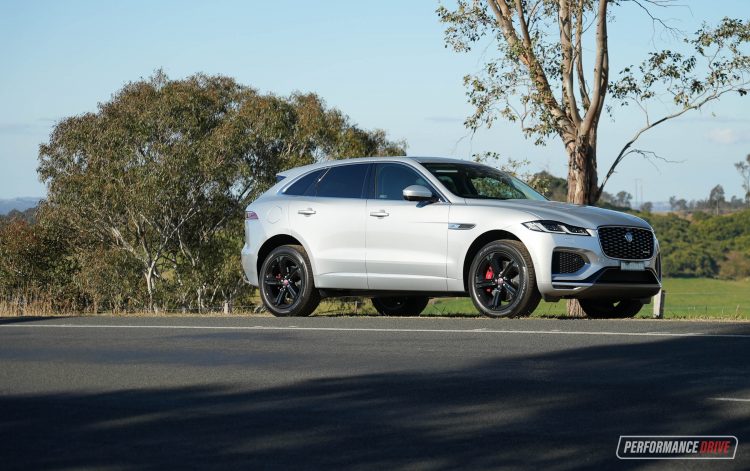 It looks big, bold, and elegant. But surprisingly, it does not fall into the medium SUV category anymore, according to VFACTS. This means that it has the tough fight against the likes of the BMW X5 and X6, Audi Q7, Genesis GV80, Mercedes-Benz GLE-Class, and Volvo XC90.

Built in the United Kingdom, you can get the F-PACE in four forms. The P250 comes with a 2.0L turbo-petrol four-cylinder that outputs 184kW and 365Nm. The P400 is fitted with a 3.0L turbo and electric compressor intercooled inline six-cylinder petrol that whips out 294kW and 550Nm. Then there is the D300 we’re testing here, which goes with a 3.0L twin-turbo intercooled inline-six diesel that produces 221kW and 650Nm. And at the top of the food-chain is the SVR with its 5.0L supercharged V8 that belts out 405kW and 700Nm. 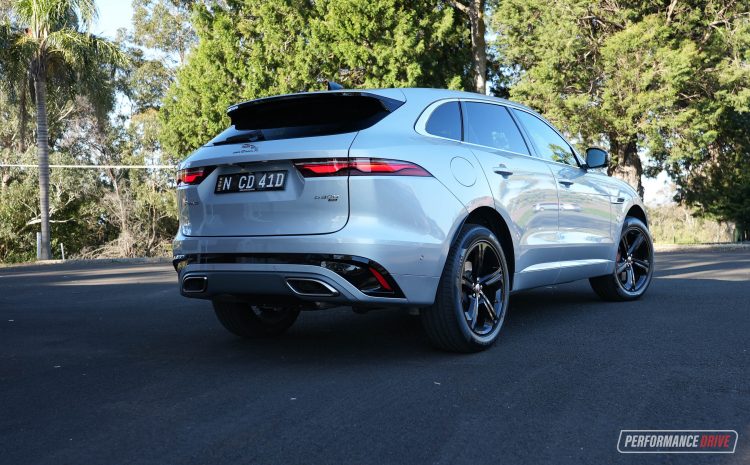 The external design language of the F-PACE is unambiguously Jaguar. Not a lot has changed over the last five years because it is still strikingly good-looking. You get those instantly recognisable angry ‘frowning’ headlights and bonnet curves that look like they have been shaped by speed itself. There is an updated black and dotted chrome front grille with a prominent chrome surround, and L-shaped LEDs that look superb.

The midsection flows with a minimalist look and smooth sheet metal until you reach the rear. Here, you are met with beautifully crafted new LED taillights. The small circular element is now gone, and a more horizontally opposed design dominates – helped by a distinct chrome line that strikes through the length of the taillamps. The black rear apron has also been reduced to include a painted lower surround, which adds a sporty feel. The exterior is still a winner in our eyes. 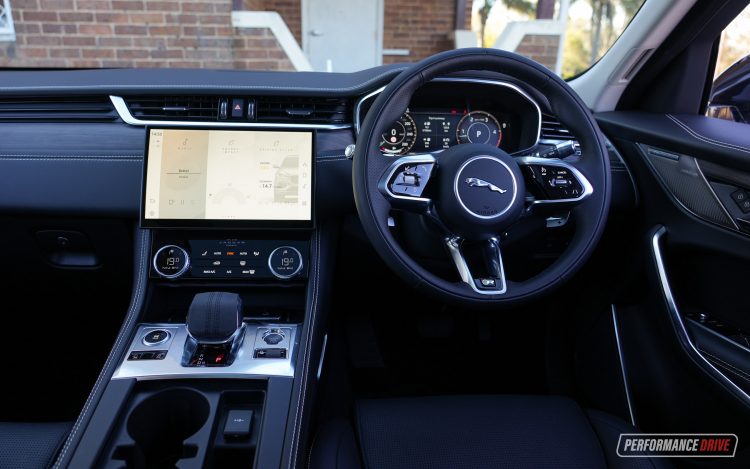 Timeless, immersive luxury is one way to describe the interior. You feel like a royal when you take a seat. There are four perforated DuoLeather seat colours to choose from – ebony, light oyster, Mars red and Siena Tan. You can also choose from different headliners and trim finishing. But the brushed aluminium and dark brown open-pour wood veneer in our test vehicle looks brilliant. We love the presentation of the long aluminium strip along the dash butting up against the leather, and the air vents that morph into the linear design of the dash. There is a new drive selector with ‘cricket-ball’ stitching, and the electric window switches have been moved down from the top of the door panel, putting them within easier reach for occupants.

The interior tech incorporated and the amount of it is A-class. There is a well-positioned tablet-style 11.4-inch curved infotainment touch-screen that uses Jaguar’s latest Pivi Pro operating system, with Android Auto and Apple CarPlay connectivity. The screen is big enough to divide into three sections to make common menus quickly accessible. There is also a high-quality 12.3-inch interactive driver display instead of an analogue gauge instrument cluster. It all looks even better at night where you can pick from 30 different colours of ambient lighting. It is strategically placed to shimmer on those aluminium surfaces. 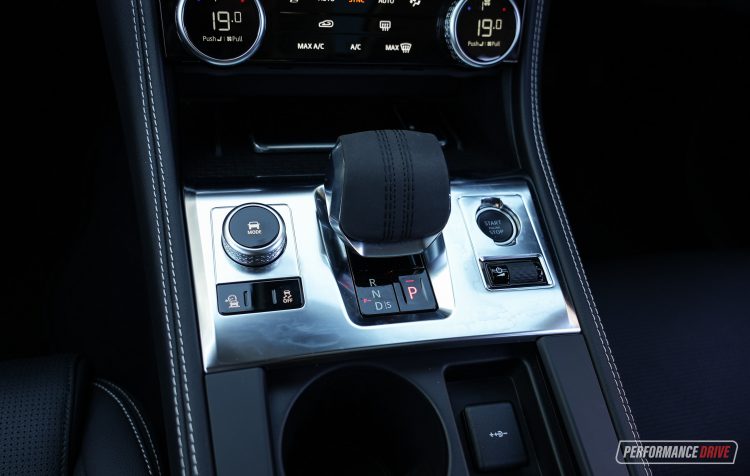 But it’s not all about appearance. Design engineers have also worked hard to make the space comfortable and practical. The seats are fit for a king. There is a multitude of adjustments, and further optional extras you can add-on, like massaging functions. No complaints about the quality and feel of the materials used, either.

In terms of layout, the environment feels airy and spread out. But not too spread out to be out of reach for the driver. There is a nifty new storage shelf under the gear shifter (though, an old concept), and plenty of stow away areas for your belongings. No matter which row you are in, you won’t feel short of room. Knee, head, and shoulder room is tried and tested. If you are in the second row, you are greeted with climate vents, charging options, and adequately-sized cup and bottle holders. 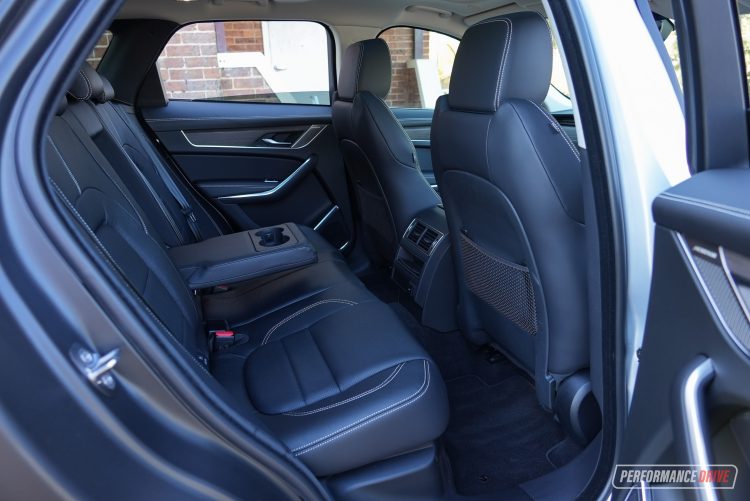 You’ll want to spend a considerable amount of time in the F-PACE. So, for those holiday adventures, boot space is praiseworthy. It can swallow 755 litres of luggage. In comparison, the Audi Q7 fits 740 litres, the Genesis GV80 fits 727 litres, and the BMW X5 fits 650 litres. With the second row folded down the space opens to 1804 litres, which is the second smallest among the same competition at this setting. But we found there to be plenty of space. And keep in mind this is due to VFACTS pushing it up a class. If it were still competing against the Audi Q5, BMW X3 and Mercedes GLC and the like, it’d be most impressive.

You get an absolute plethora of features and luxuries as standard. But there are some add-ons that you’re rudely expected to pay extra for. For example, wireless charging capability, four-zone climate control, head-up display, a gesture activated power tailgate, and active-shadowing high-beam lighting should really be included as standard at this end of town. 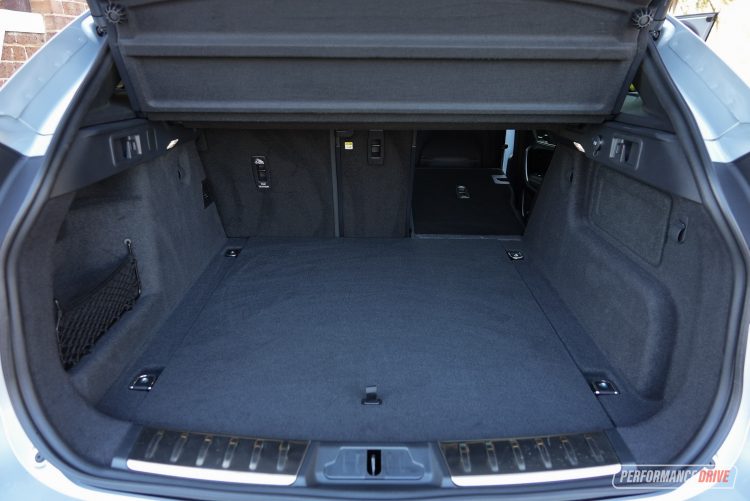 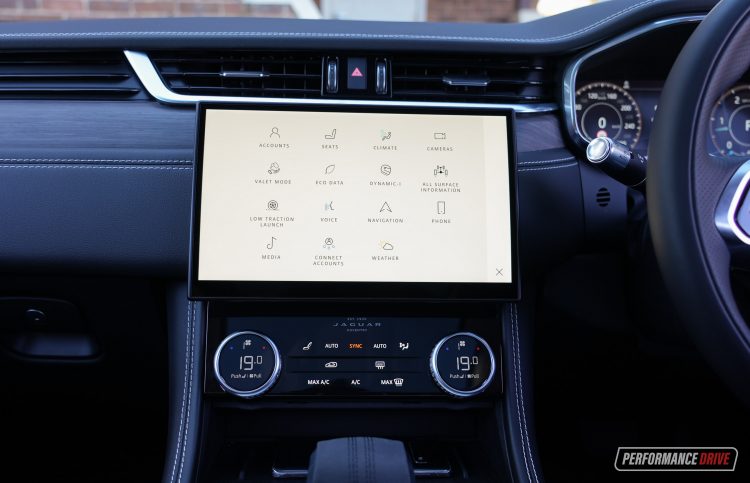 A 3.0-litre inline six diesel engine is a well-tried way to offer confident performance nowadays. But this one has a twin-turbo mild hybrid system matched up, which provides a healthy 221kW. This means that when you open the throttle, this Jag uses those animal instincts to charge. We were able to reach 0-100km/h in 6.46 seconds. Officially it is rated at 6.4 seconds.

It also offers a huge 650Nm of torque right down from a low 1500rpm. Hills and getting the two-tonne mass (1959kg tare) going are no issue. It feels like an unstoppable freight train. There is a small element of turbo lag or acceleration map sensor laziness noticed when accelerating from a rolling start. But it quickly snaps out of it and unleashes. It could be that it is programmed that way to be as economical as possible, but it is also evident in sport mode.

The eight-speed ZF auto transmission is very quick at shifting, which also contributes to its impressive performance. In addition, it is smooth and composed. The first gear ratio is notably low to get it moving quickly from take-off when under demanding acceleration. 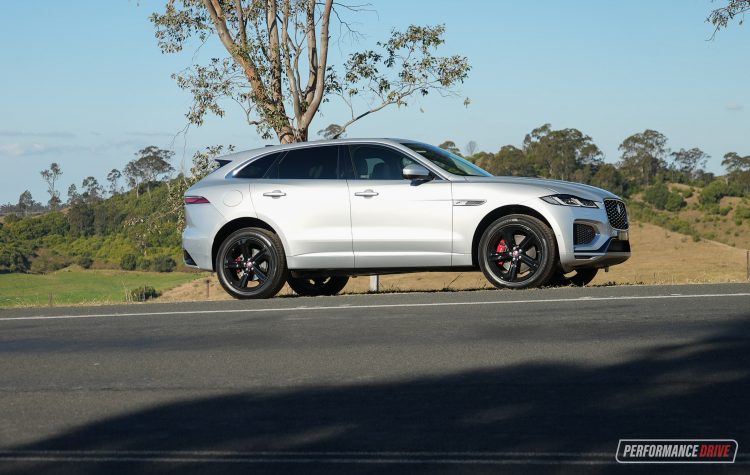 If you’re specifically in the market for an SUV with a decent towing capacity, there are better options out there. This is an SUV with a performance bias. Having said that, rated at 2400kg braked, it is still capable of towing something significant.

If you’re also eyeing some light off-road detours, it’s not a problem in the F-PACE. There are some off-road modes to choose from to assist with traction. Expectedly, the 20-inch alloy wheels and lowish profile 255/50 Pirelli P Zero tyres are made to perform on the tarmac. So, you won’t want to get too serious in the outback.

It’s a tricky formula to balance a smooth ride and performance-oriented handling in a large SUV without adaptive suspension. For the F-PACE, the dynamics are near  the front of the class in our opinion. It is stiff and taut around corners, exhibiting minimal body roll. And that is important when you have an engine that is keen to roar. But some compromise has been suffered in the comfort aspect. The initial hit of bumps sends an audible thud through the cabin, but then the rest of the suspension travel is adequately cushy. Having 20-inch wheels (or bigger if optioned) means there is less cushioning ability over bumps. 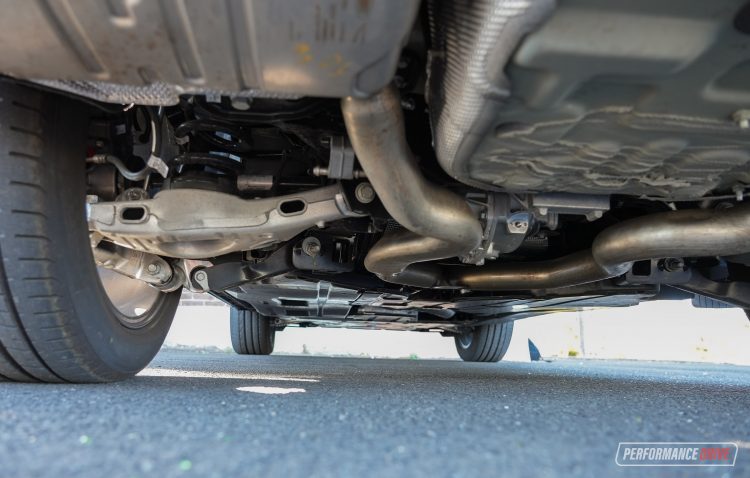 In terms of on the road feel, the F-PACE feels large and a tad cumbersome in tighter situations. It could be the bulging bonnet, the high driving position, that initial acceleration lag at times, or a combination of them all. But it would be grand if Jaguar could make it feel a little more agile, or lighter on its feet. The brakes also bite in hard on initial press, but then feel progressive and smooth.

Being a powerful six-cylinder, and a heavy SUV, you might assume you would pay the price at the petrol station. But surprisingly, our fuel consumption figures averaged 7.7L /100km, which included mixed highway and city driving. Official figures rate it at 7.0L/100km. This is a commendable figure considering the amount of power you’re getting.

The revamped Jaguar F-PACE still has plenty of modern tricks up it’s sleeve yet. It executes turn-head boldness, luxuriousness, and performance brilliantly. You can notice the attention to detail that has gone into the lavish interior, and it still maintains the practicality and space of an SUV. Its just a pity that they charge more money for some features that should be standard for this price range.

We love how Jaguar proves that diesel engines can deliver real performance, while also offering good and repeatable real-world economy. Inside and out, Jaguar takes the lead in creating a beautifully-designed SUV. And for those who like to customise, there are a myriad of choices to pick from.

PROS:
– Fast for a diesel, quick to launch from stop for its size thanks to a low first gear
– Good fuel economy for the vehicle’s size, weight and power
– Top-shelf interior, dark brown woodgrain and tablet touch-screen look royal
– Jaguars are now covered by a 5-year warranty
– Huge variety of options and personalisation, for those that don’t like to blend in

CONS:
– Turbo/powertrain lag in certain circumstances
– Unrefined braking, has sharp bite on initial press
– Outrageous price for some optional extras, some should be standard