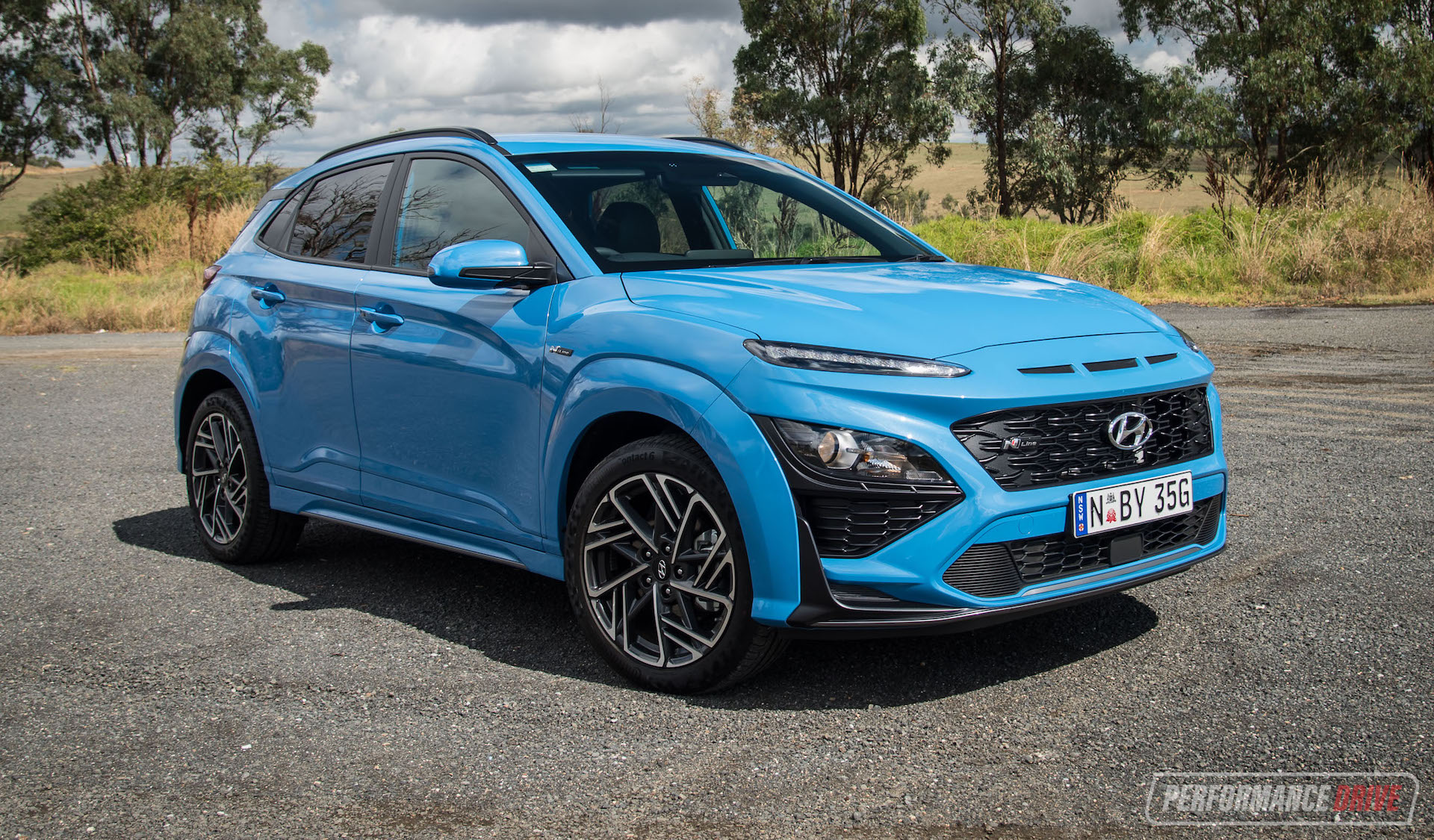 One of the most popular small SUVs on the Australian new car market has just been refreshed. Welcome to the 2021 Hyundai Kona, which, excitingly, is available in N Line trim for the very first time. 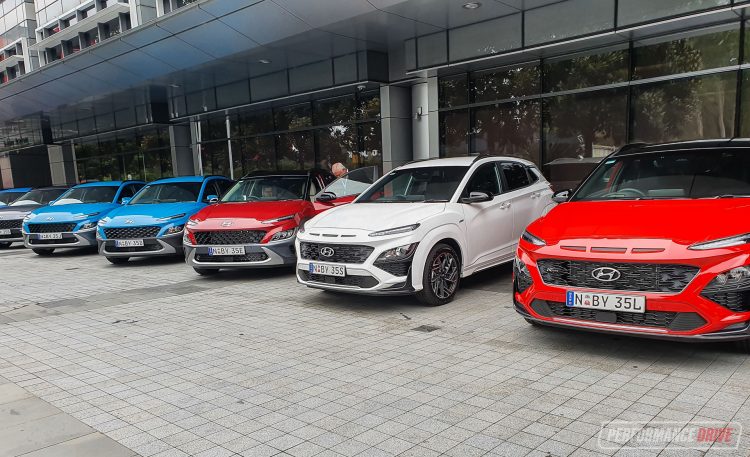 Hyundai Australia sold 12,514 Konas during 2020, making it the second most popular vehicle in the crowded and competitive small SUV class. Only the fleet-loving Mitsubishi ASX bettered it, with 14,056 sales. Unlike the ASX though, the Kona is still quite a fresh model, having originally debuted in 2017. This is the first major facelift.

The 2021 lineup has been trimmed down a bit since then, with four main variants now spanning the Kona, Kona Active, Elite, and Highlander, while N Line and N Line Premium join on as supplements. Prices start from $26,600 and go up to $42,400 for the N Line Premium. The Highlander starts from $38,000. That’s down from $40,200 for the outgoing Highlander, but the new model misses out on the 1.6 turbo engine. We’ll explain in a sec.

During this media launch event we drove the Highlander, the N Line, and the N Line Premium. So for this review we will mainly focus on those. 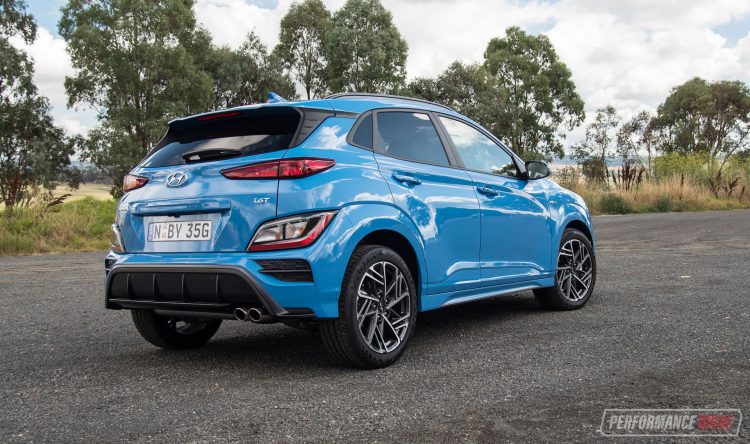 Yes, now all models other than the N Line versions come with a 2.0-litre naturally aspirated four-cylinder, connected up to a new CVT auto with front-wheel drive. That means you can no longer have the Highlander, or Elite for that matter, with the turbo AWD powertrain. That does explain some of the reductions in price. The new 2.0L produces 110kW and 180Nm, with the switch to a CVT from the old six-speed auto helping to see fuel economy improve by an impressive 14 per cent. On the official combined cycle the new model averages 6.2L/100km, down from 7.2L/100km.

Firstly, we would normally say a CVT is possibly the worst auto transmission we could think of. However, in a small, practical runaround like the Kona, it’s not as bad as you might think. The unit here has eight artificial steps/gears, so it kinda behaves like a normal auto. And, as with most CVTs, it makes the engine feel like it produces a greater mid-range punch. It does mean the engine screams quite a bit, especially up long steep hills and during overtaking. In all other conditions, the engine feels torquey and ready to go, but also very smooth and relaxing during light demands. 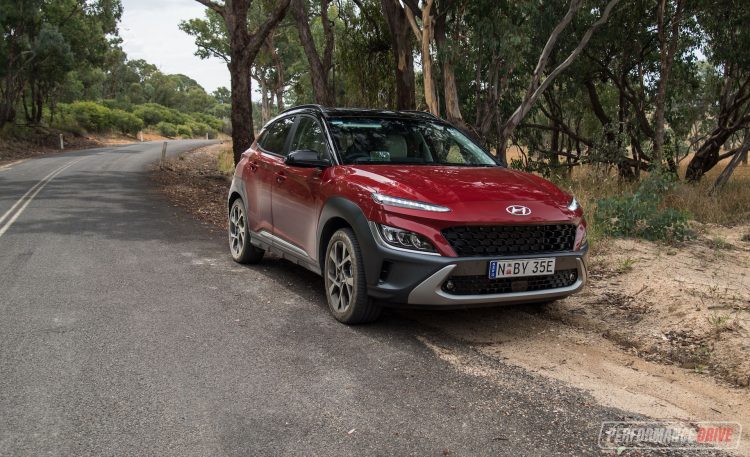 It is a shame the Elite and Highlander, in particular, are no longer available with all-wheel drive, as we feel like there’s always some extra appeal for the top models to feature the most capable powertrains available. It also means the Highlander loses some of its grand touring ability, so no more trips to the snow without tyre chains.

What Hyundai has done though is push this appeal over to the new N Line brand. If you want the sportiest and most capable gear, think N. For the N Line you get an updated version of the old 1.6-litre turbo four-cylinder, now producing 146kW (up from 130kW) and the same 265Nm. Bolted up next to this is the seven-speed dual-clutch auto from before, with all-wheel drive. AWD also includes a multi-link rear suspension setup, as before, leaving the FWD models with a basic torsion beam arrangement for the back. 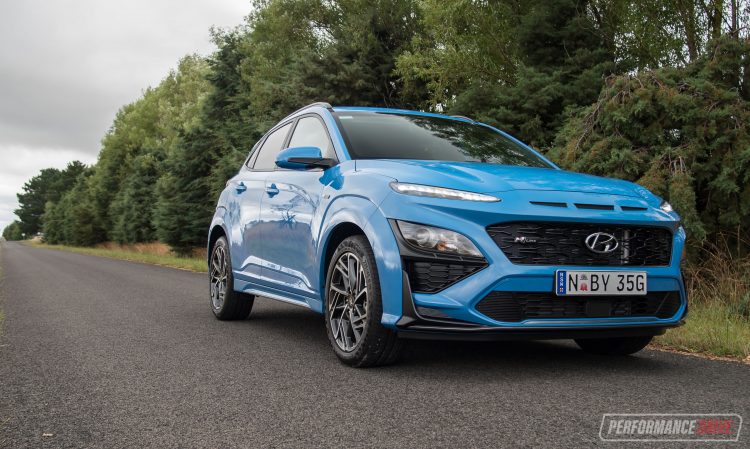 Out on the road we experienced some inconsistent behaviour with the N Line models. The first example we drove, a Premium, shifted gears quite abruptly, especially the lower gears, such as going from first to second with moderate throttle. In one instance we were slowing down for a red light, which then turned green as we slowed to around 20km/h. After applying a completely normal amount of throttle, the gearbox had a noticeable moment of hesitation and actually laboured the engine, before deciding what gear it wanted to be in to maintain progress.

On the return route in a standard N Line, it was quite the opposite. The transmission seemed overly smooth and almost lazy, especially taking off from a dead stop. We get the feeling Hyundai has been trying hard to make this gearbox behave like a conventional auto, but in that effort it has turned the smoothness levels up too high. Well, at least in one vehicle we drove. But anyway, our experiences could be purely subject to these test cars, which are probably among the first examples in the country. It would be reasonable to expect a more refined experience once the powertrain is fully run in as well.

We managed to pull away from the group for some of our famous 0-100km/h tests with both powertrains. The best we scored with the Highlander was 11.78 seconds, with the best run in the N Line stopping the Vbox clock in 8.49 seconds. For some perspective, we last achieved 9.66 seconds in the old 2.0MPi (albeit the Active variant), and a best of 7.52 in the previous Kona Highlander 1.6T AWD. Obviously things like weather conditions and many other factors can influence times. We will try and book in an N Line for a more thorough test in the near future, and run it on our usual private road in more controlled conditions. 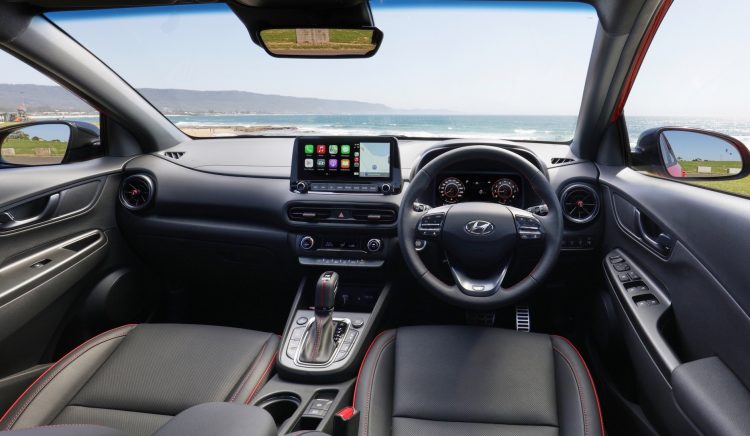 Ultimately though, this market segment is not about 0-100 runs. Buyers are attracted to this segment because these small SUVs are just so easy to drive, and very versatile. Firstly, there’s the whole getting in and out thing. The seat level is at the perfect height from the ground, so you can just plonk yourself straight in. Wide-opening doors help, too, and the boot height requires no extreme bending.

Hyundai has tidied up the interior for the 2021 model. The dash and console are pretty similar to before, and that’s good, with twin cup holders in the front with a long thin tray sitting adjacent. There’s also a handy storage box in the middle and arm rest, while all models now come with a wireless phone charger pad just in front of the gear selector. 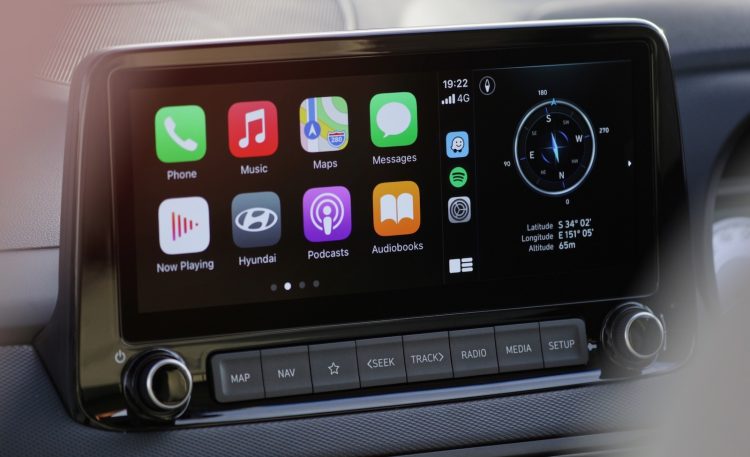 The base model and the Active now feature an 8.0-inch touch-screen, while all others receive a crisp new 10.25-inch wide-screen interface. The graphics are superb on this bigger unit, as is the touch response and sheer depth of the menus. However, if we had one complaint with this new larger system it’s that you do need to make more selections just to complete a simple task.

For example, browsing radio stations requires hitting a little list icon in the top-left, then you have to select ‘list’, then you can browse through. Not happy with your selection? Start the whole process again. It probably doesn’t seem so tedious in words, but there are a few common functions that require a handful of steps like this. 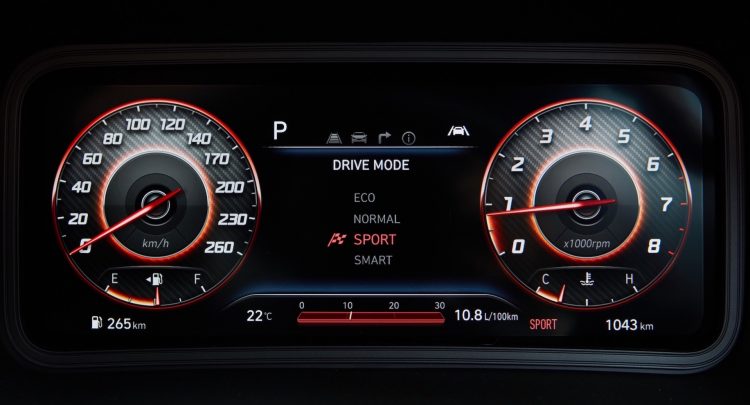 Also new, the Highlander and N Line Premium showcase a suave 10.25-inch digital instrument cluster. The graphics and display theme changes with the selected driving mode, and it’s easy to toggle through the trip computer info display in the middle section using buttons on the steering wheel.

We’re a bit disappointed the lane-keep assist on/off switch has been removed from the right-side dash, so instead you have to make a few selections from within the touch-screen each time you start the car. (Update: you can also hold down the steering assist button on the steering wheel for around 2-3 seconds and it will deactivate the system.)

Rear passengers are now treated to a USB charging port, complete with a little tray for your phone. It would be nice to see some climate vents back here, but we guess the cabin volume is pretty small in these types of vehicles; rear vents are probably not really needed. Legroom and headroom are decent for this class, and there’s a flip-down arm rest with cup holders for added convenience.

This is a healthy evolution of a very attractive little SUV. You still get a lot for your money, regardless of the trim grade, and Hyundai has made it easier to choose between the grades. If you want something practical and economical, go the entry models. If you want sportiness and something with a bit more fun and zest, the new N Line is your pick.

For us, the N Line is a real treat. There aren’t many (or any?) rivals that present anything like it, except in the premium fields. We love that the turbo engine has been boosted from before, and that it’s now only available with the N badge. There’s also just the right amount of enhancements and distinguishing features, but without going over the top.

Adding further diversity, Hyundai Australia will launch the new Kona Electric in March, while the cracking Kona N high-performance model will arrive before the end of this year. The N will come in as the only hardcore SUV in this class. We’re eagerly looking forward to that one.