Australia’s ANCAP has just finished testing its latest batch of new vehicles, including the Toyota 86/Subaru BRZ, the new Mercedes-Benz A-Class, and the new Range Rover. All three have been awarded the maximum five stars. 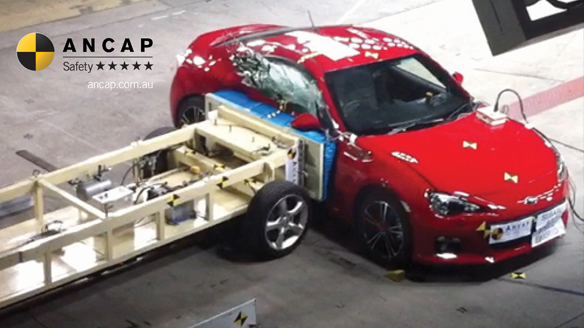 For the Toyota 86 and Subaru BRZ duo, ANCAP found that in the frontal offset crash test, leg protection for the front passengers was acceptable, as was passenger chest protection. Head protection in the side pole crash test was good. The sports coupes were given 34.4 out of 37 overall. This puts it slightly behind its closest rival, the Hyundai Veloster (35.47).

In Mercedes-Benz’s sporty new hatch, the A-Class, ANCAP found leg protection for front passengers was good during the frontal offset crash test. All other crash test results were ‘good’.

The A-Class was given an overall score of 35.8 out of 37. This means the new Volvo V40 remains the king in this vehicle segment. It has been scored 36.67 out of 37 in previous tests. The A-Class’s main rival, the BMW 1 Series, also earned a higher rating in previous tests (36.33).

As for the majestic new Range Rover, ANCAP found that in the frontal offset crash test, leg protection for the front passengers was acceptable. All other areas in other tests were ‘good’ as well.

The Range Rover was given a mark of 36.19 out of 37. This puts it slightly behind its closest rival, the Mercedes-Benz ML-Class, which has previously been marked 36.34.

“It doesn’t matter what type of car consumers are looking to buy. There’s now a multitude of makes, models and car types which have achieved the maximum 5 star ANCAP safety rating. The range of cars we’ve released ratings for today exemplifies this.”

Many other new vehicles on sale in Australia have been tested by ANCAP. Head over to the ANCAP website to search through for your car.