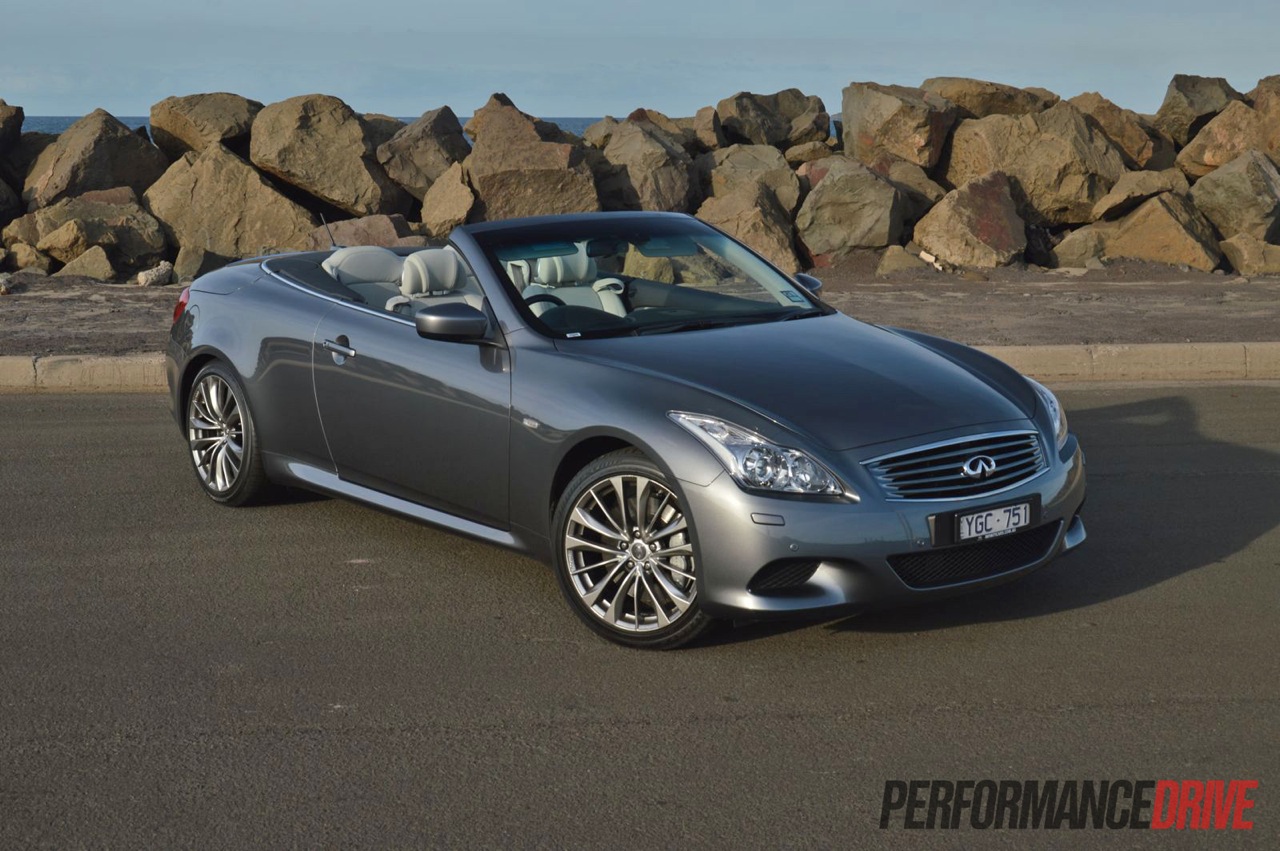 There’s something quintessentially exquisite about the 2013 Infiniti G37 S Premium. From the moment you get in, you’re very aware that this is not your average Nissan. It exudes class, style and technology in equally refined levels. And it’s all backed by the current Formula One Champion and team.

It might be new to Australia, but, it has been around in the US since 2008. Does that mean it’s already ready for an update? 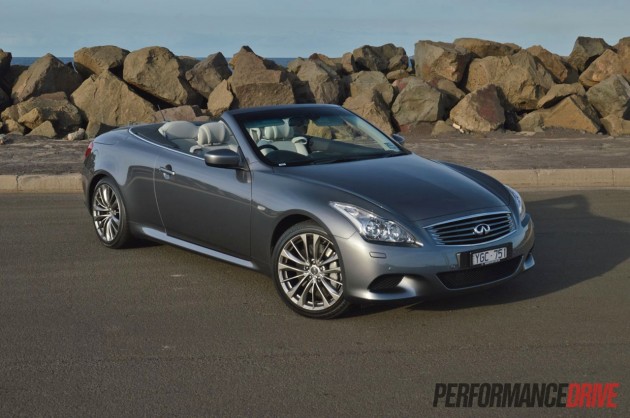 To understand what the Infiniti G37 is and where it fits into the Australian market, you basically need to look at this as a supreme Nissan. Think of it as like a Toyota-Lexus relationship, only it’s a Nissan-Infiniti affair.

Infiniti was initially set up in 1989 as a luxury division of Nissan. Its aim was to provide North America with a selection of bespoke premium Nissan-based vehicles.

It’s a similar story today, only the official headquarters is no longer in Yokohama in Japan. Nope, Infiniti Global Limited now resides in one of the biggest luxury car capitals of the world; China. Or, more specifically, Hong Kong.

In a three-model lineup in Australia (so far), the G37 Coupe and Convertible are the sports cars of the range alongside the M sedan and the FX SUV. The G37s are based on the Nissan FM platform, which, if you stick your head under a Nissan 350/370Z, or, to a lesser extent, a Nissan GT-R, you’ll find the same backbone.

For this review we’re testing both the convertible and coupe range-topping S Premium versions, and we’ll point out the notable differences in the various sections below.

Prices for the coupe start at $83,500, while the convertible retails for $87,900 (both excluding on-road costs). With prices like these, they are looking to be taken very seriously indeed, facing some strong competition. 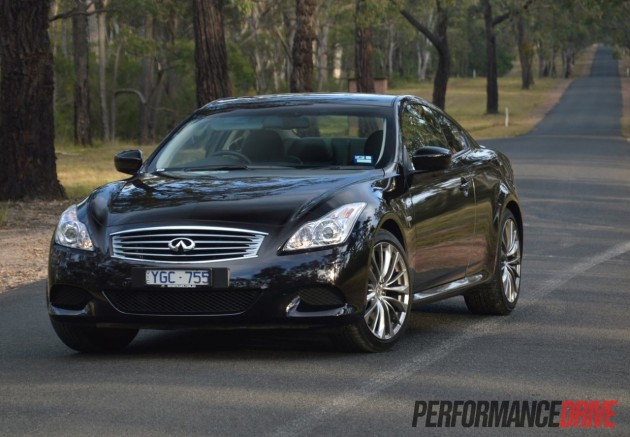 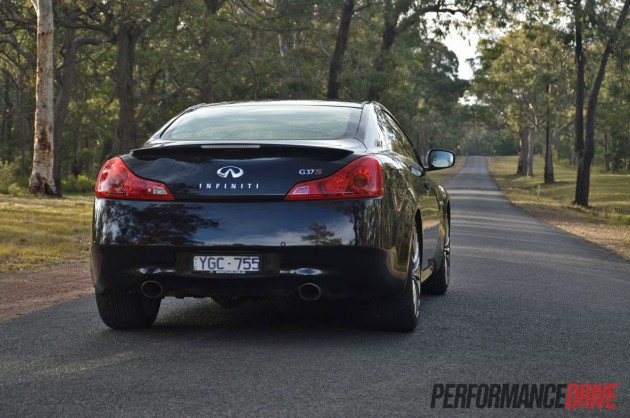 As we mentioned above, literally from the moment you step foot in the G37 S, you’re instantly greeted with the smells and sights of a properly premium package. There’s quality surfaces and brushed metals elegantly placed around the cabin, and in the convertible’s sake, the soft white leather upholstery is simply pristine and oozes posh, pampering luxury.

Some of the layout and controls are a little bit dated in our opinion, with a pretty straight forward main dash fascia. The swirl-effect metal inlays are just exquisite to touch and look at though, and the clarity of the graphics used within the standard 7.0-inch multimedia LCD screens are very up to date. The interface also includes a 10GB storage drive, which is handy for those who are tired of carrying around a USB stick.

Like a Lexus, everything is standard and part of the package with the G37 S. In fact, everything you see in the images here is standard, such as heated front seats, leather, sat-nav, 19-inch Enkei alloy wheels, a rear-view camera… the main thing you can option is the colour. This is great news for German luxury car buyers who are considering a brand change; the option boxes don’t add up to the original sum of the car, in other words.

Hidden within the depths of the cabin fixtures on both variants is a sensuously pleasing Bose surround sound system with 11 speakers in the coupe and 13 in the convertible. The convertible gets Open Air and AudioPilot technologies which can alter the sound characteristics for when the roof is up or down. The system includes additional speakers mounted on the headrests of the front seats – an excellent attention to detail. 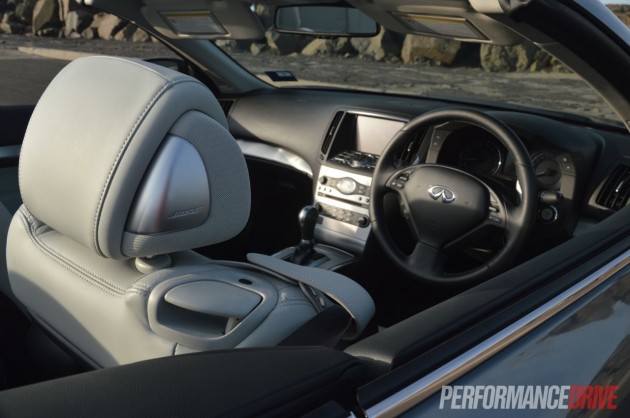 While the coupe and convertible S Premium versions are the same, they are specified slightly differently. But it’s only to suit the car’s personality, such as with the speaker example above.

The coupe is focused more on the driving side of things, and supports active and enthusiastic driving styles more than the open-top version. While the convertible is more about pampering the passengers in a cool, modern, and prestigious fashion that’s focused more on comfort and relaxation.

And so it comes as no surprise that the coupe gets slightly more sporty front seats with a 14-way adjustable driver’s chair, as opposed to the, tsss, measly 10-way adjustable item in the convertible.

Underneath, there are some more significant changes, some of which may actually cause some degree of eyebrow blip. While the coupe S Premium comes with a four-wheel-steer system for sharper cornering, the drop-top misses out. It also misses out on the sports-tuned suspension that the coupe gets. On the plus side, the convertible offers a wider track compared with the coupe for increased stability.

At the more serious end of the technical differences, the coupe comes with a viscous limited-slip differential as opposed to the conventional unit with traction and stability control in the convertible. We found no excessive inside wheelspin during our test with either of them. In fact, we can confirm both variants perform donuts equally well (on a private road of course).

Speaking of tyre-schredding fun, are the G37s well endowed when it comes to packing a punch? You bet. They come with a roaring and raunchy 3.7-litre naturally aspirated V6 engine producing 235kW and 360Nm. The engine is powerful by the class standards, however, much of the competition offer more torque thanks to turbocharging or supercharging technologies.

The V6 is matched up to a seven-speed automatic transmission with paddle shifters (blipping on the downshifts), on both models. More on their behaviours below.

As for safety, both versions are yet to be tested by Australia’s ANCAP. They do come with all of the modern safety devices you’d expect from a flagship vehicle. With a multitude of airbags on board, traction and stability control, automatic level adjusting headlights, active head restraints, and a ‘Zone Body’ construction with energy dispersing side structures; it’s as equipped as the market expects.

From a driver’s perspective, both variants also get incredibly powerful and relentless four-piston front and two-piston rear brakes with 356mm front, and 350mm rear discs. These perform extremely well, remaining strong and solid throughout our vigorous tests. Very impressive equipment. 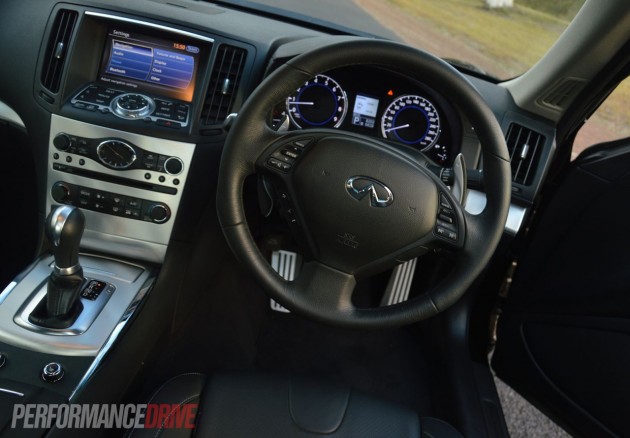 The V6 sounds racy and alluring from the outside, but from the inside, it sounds a bit harsh. It’s refined and vibration-free, with progressive throttle response and reasonable low-end torque. It does like a drink though, offering an official fuel economy rating of 10.5L/100km in the coupe (11.4L/100km for the convertible) – we averaged 14.6L/100km during our mixed driving style test.

Well-spaced gears, especially between first and second, helps to provide a satisfyingly energetic run straight off the line. Third gear pulls slightly longer, really gathering speed, until fourth takes you well over into licence-losing territory. You can hear it in the video below; changing through first and second is very swift, and then third sets it up for the top end. It all results in a dashing 0-100km/h time of just 5.4 seconds for the coupe, and 6.0 seconds for convertible. The convertible is a bit fatter, pressing down on the scales with 174kg more force.

The four-wheel-steering system is fabulously direct in the coupe, providing sharp and focused cornering attitudes. Through tight twists, you needn’t worry about taking your hands off the wheel, the steering is that tight. This is important in a car like this as Sebastian Vettel will hardly be impressed by a driver awkwardly shuffling like amateur. On the highway, it can feel overly touchy, at least until you get used to it.

Direct steering is one thing, but sometimes vehicles can turn in too sharply for their own good, resulting in a degree of body roll and/or traction issues. In the Infiniti G37 S, you can vigorously throw the nose into a corner and plant the throttle, and it will amaze you with the level of finesse and confidence it brings. It’s a real driving machine, the coupe. 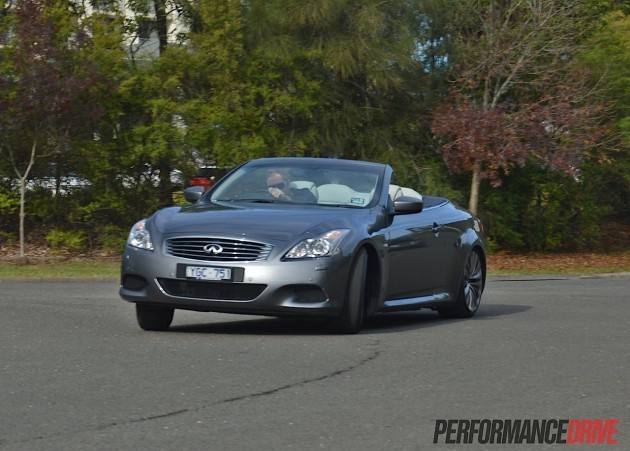 The convertible weighs almost 200kg heavier than the coupe, as mentioned, and you can feel it. There aren’t many drop-tops that aren’t substantially heavier than their lidded counterparts. It’s almost an accepted engineering consequence of shaving the roof from a car.

With the added weight on board, the convertible doesn’t handle as sure-footedly or securely as the coupe. It prefers longer, sweeping arcs as opposed to a set of S-bends. Without the four-wheel steering, the convertible is a more relaxing drive in some senses, and is less touchy. This is probably exactly what Infiniti was aiming for.

For those who would rather spend time looking elegant and enjoying the great outdoors, the convertible will obviously appeal most. It’s a striking car, and one that attracted many gawks and intrigued faces during our test. In this test car’s silver on white leather, it’s quite stunning to behold. 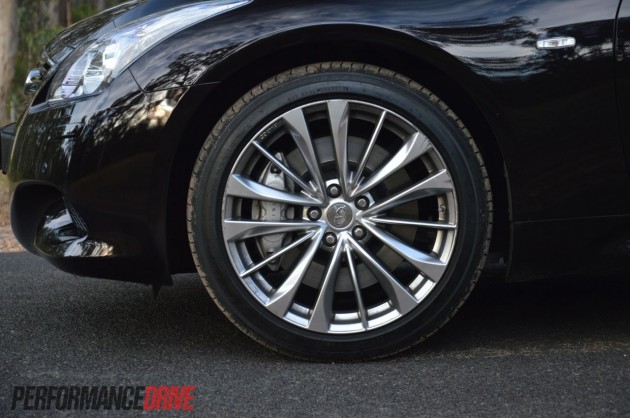 If you want to be Sebastian Vettel, you’ll need to get into some form of racing, and from there it’s going to be a long haul to work your way to the top.

For everybody else, the Infiniti G37 S makes you feel like an important driver in a very distant but similar sort of way. It makes you feel intelligent, and in-tune with the high-end automotive world, flattering you. And for that reason, we give it our blessing.

Owning an Infiniti would be an emotionally uplifting experience. It was for us, for the two weeks we had keys.

CONS:
– Fuel economy
– Interior starting to date?
– Engine could do with more torque
– Pricey
– Shallow boot in the coupe. Almost zero space when the roof is down in the convertible 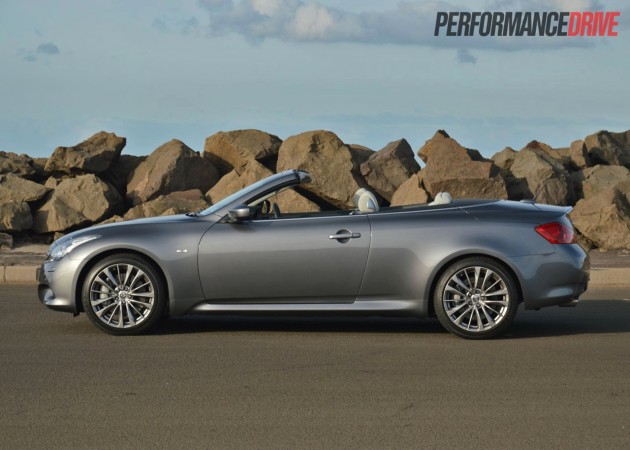