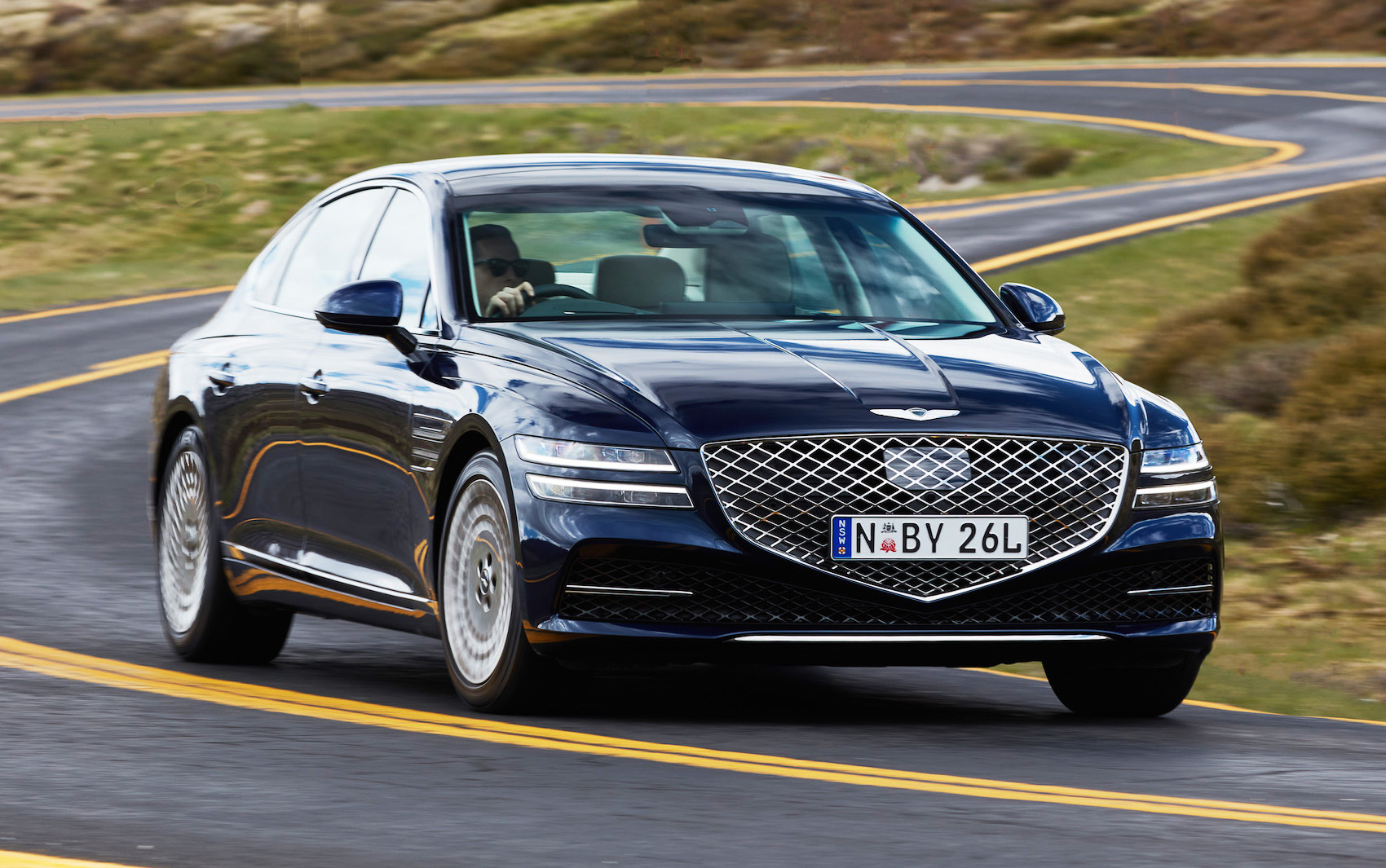 A few years ago the Genesis name launched in Australia with the Hyundai Genesis. It was a grand old sedan, more plush than the Euro rivals but not as polished and perfected in terms of technology and driving characteristics. Now there’s an all-new model, called the 2021 Genesis G80. It’s targeting younger buyers and looks to stand out among the competitors with a bold and distinctive design and stunningly luxurious interior. 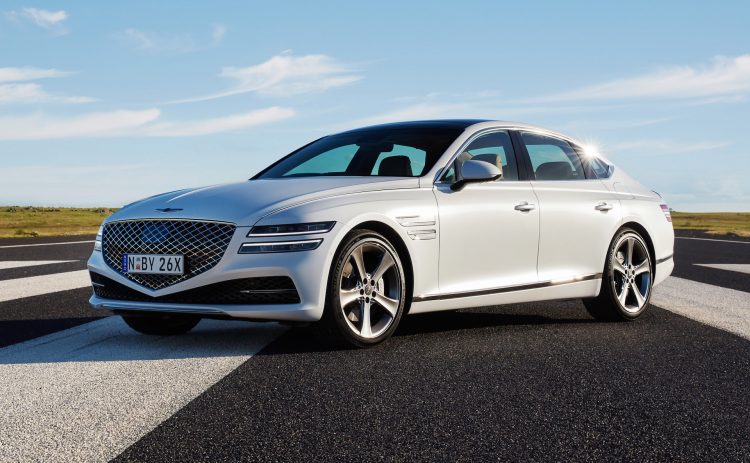 It showcases a brand new platform, too, bringing in massive improvements in technology, safety, and driving dynamics. To top it all off, the new G80 debuts (along with the GV80 SUV launched a couple of weeks ago) Hyundai Motor Group’s all-new 2.5 turbo and 3.5 twin-turbo engines.

Just the two variants are hitting the Australian market, although buyers can option up to $13,000 Luxury Pack on both the 2.5T and 3.5T. Prices start from $84,900 and $99,900, respectively (excluding on-road costs). That includes a segment-leading five-year warranty and five years free scheduled services. 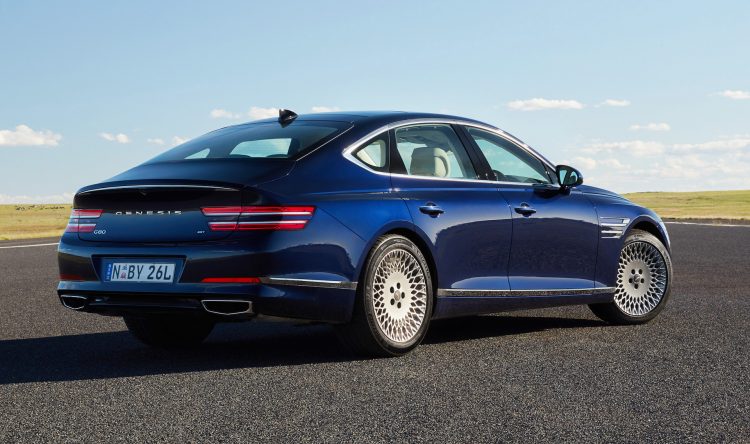 Starting with the foundations, the 2021 G80 introduces a fresh platform known as the ‘M3’, incorporating multi-link suspension at the front and rear. The centre of gravity has been brought down to improve stability over the predecessor, and there’s an extensive use of lightweight materials such as aluminium in its construction. For example, the body is 125kg lighter than before. As a result, it’s still very fat.

Even in its lightest form the G80 2.5T has a tare weight of 1869kg. To put that into perspective the base Audi 40 TFSI has a tare weight of 1785kg, the BMW 520i weighs just 1566kg (tare), and the Mercedes-Benz E 200 weighs 1775kg (tare). As you can see there are some big differences there compared with the G80, however, the G80 could be forgiven somewhat as it does come equipped with plenty of standard features – some of those rivals require options to match. 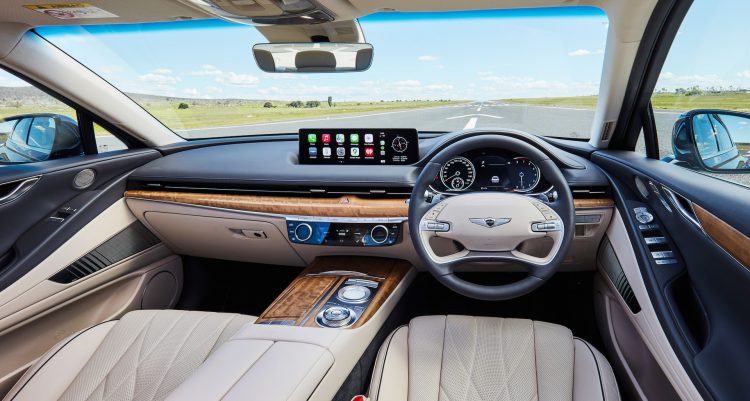 As standard, both models in Australia come with a huge 14.5-inch wide-screen multimedia system with touch capability. It’s controlled via a rather charming rotary dial on the console. Its operation does take some getting used to but once you get the hang of it the menu functions and sequences become intuitive. The system supports Android Auto and Apple CarPlay as well.

If you opt for that Luxury Pack (on either variant) the twin-dial instrument cluster becomes fully digital. This is one of the best-presented digital clusters we’ve seen. Yes, Mercedes-Benz probably leads the way in terms of graphics and crispness, but the way Genesis designers have arranged the gauges and the colours, it just seems really luxurious and somewhat traditional. 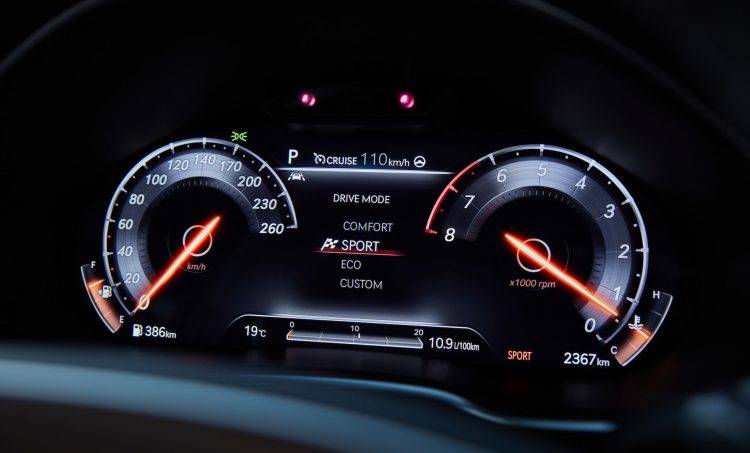 And that’s the underlying tone from the overall interior. We think it is one of the most luxurious cabins in the class, in the true meaning of the word. Most of the Euro rivals go for a smarter yet more conservative approach, whereas this harks back to traditional luxury characteristics. Lots of space and light-coloured materials, and Genesis has installed real open-pore wood trimmings for the dash and doors. These wood elements could come at the wrong time though, especially with so many trends turning to more sustainable philosophies. Even so, they suit perfectly with this setting.

We’re not a big fan of the four-spoke steering wheel. It looks like it comes from a 1990s Hyundai Sonata. The little metallic controls and the little spiny wheel things are great, if a bit Audi, but the rest of it is just yuck in our opinion. The colour combination and the lines make it look sagged and droopy, too. 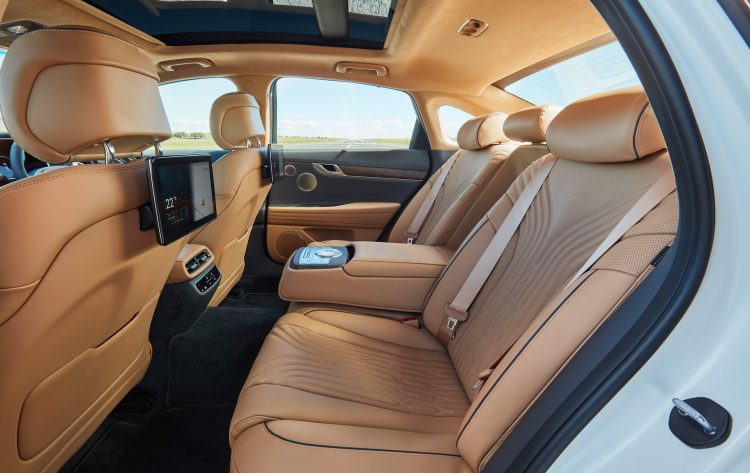 Passenger space is abundant. You sit slightly submerged in the front, and it’s easy to find a natural driving position. In the back, it is undoubtedly the best seat in the house. The backrest is reclined by default and the ample legroom makes it feel like a proper limousine. Going for that option pack also brings in two 9.2-inch screens for the backs of the front seats. These feature their own 3.5mm headphone port and offer guests a selection of independent media options. A chunky centre arm rest houses another console panel, inspired by the console in the front.

During the official media launch event media were given the opportunity to sample all variants, including the Luxury Pack option. And to be honest, the 2.5T with the Luxury Pack could easily suffice for most buyers; it’s essentially the same cabin package as the 3.5T. Genesis predicts a sales ratio of 55:45 to the 2.5T. 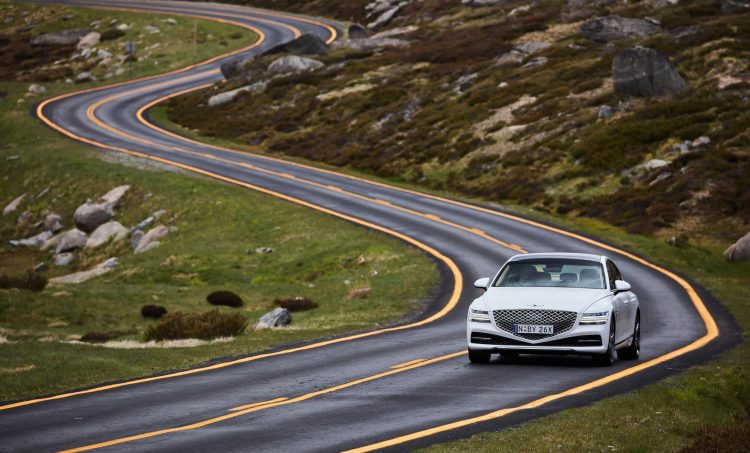 On the road, the first thing we notice is, again, this is definitely focused more on luxury than anything else. It is serenely quiet and soothing, from the moment you shut the door. It’s like the world is completely shut off. It’s really nice. Genesis says it has installed acoustic glass and triple sealing for the front doors to amplify this effect. Even the wheels are engineered to support luxury and quietness, featuring special hollow chambers to counter-balance sound waves.

Once up and running, it is much the same feeling. Genesis has conducted local suspension tuning to suit Aussie conditions, and yep, the ride quality is brilliant. It feels like you’re driving on a cloud – something that can’t be said of many Euro rivals. If you opt for the 3.5T you also get to experience the new Genesis Adaptive Control Suspension (GACS) with active Road Preview functionality. Essentially, it uses front cameras to literally monitor road surface and anticipate and prepare the body for bumps. To be honest, it just feels like suspension to us. But we’ll try and do some more thorough testing with it in the future.

Lastly to those engines. Well the 2.5T certainly is a surprise. The large capacity helps to push the big car along and maintain an easy cruising momentum. With 422Nm available between 1650-4000rpm, it does offer more oomph than many of the 2.0T rivals which seem to hover around the 350Nm mark. We guess some of the extra weight of the G80 is supported by this added torque. 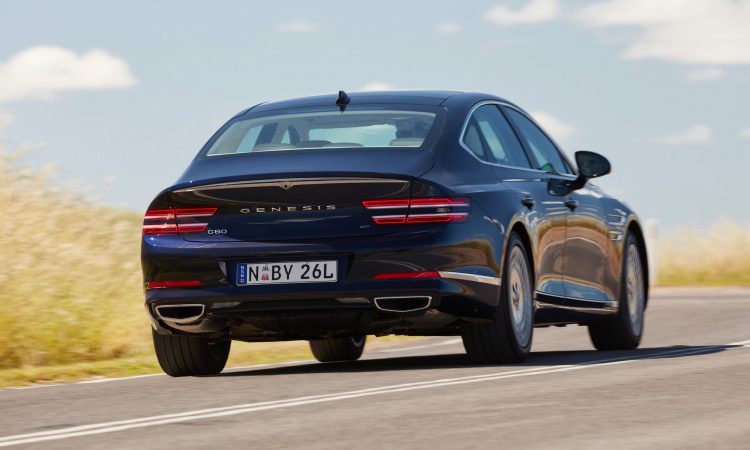 We clocked some sneaky 0-100km/h runs with the Vbox and the 2.5T returned a best of 6.95 seconds. That’s a decent time for an entry model, although pretty far off Genesis’s claim of 6.0 seconds. Really, the only element we don’t like about this engine is the fake sound that’s generated through the in-cabin speakers. Seriously, carmakers need to get rid of this shit. It doesn’t enhance the driving experience, at all. Just let the engine rev quietly if that’s what it does. Or at least offer a switch for those less gullible to turn the fake stuff off.

Stepping in the new 3.5T, you’ll immediate notice the beefy 530Nm of torque. It surges more freely and builds speed effortlessly. There seems to be a high focus on mid-range with this engine, with peak torque spread from 1300-4500rpm. That’s good as that’s where most drivers and going to be spending most of their time. In other words, you can gallop through higher-speed traffic conditions without seeming like you’re pushing it. 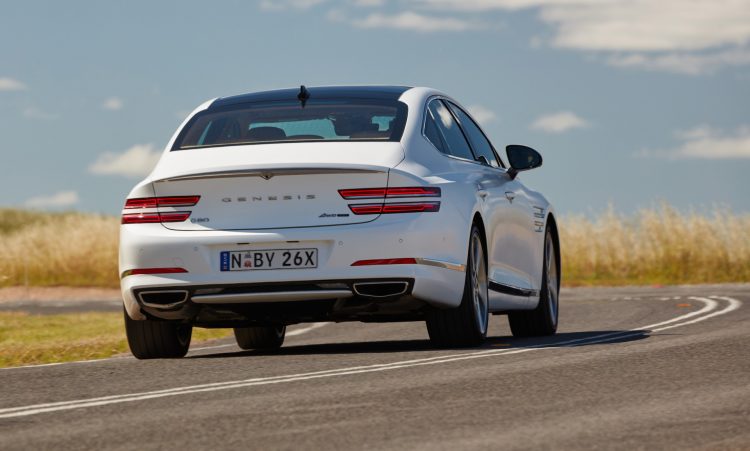 Pushing your boot hard into the throttle results in heaving acceleration. All 279kW is achieved at a low 5800rpm, which, again, supports the idea of mid-range strength. We clocked 0-100km/h in a dashing 5.67 seconds, which certainly isn’t hanging around (Genesis claims 5.1 seconds). This was achieved by building the revs on the brake pedal before letting go to a catapulting start. The 3.5T comes standard with all-wheel drive too, so it’s always stable and tracking true.

Flicking over to Sport mode results in more power being sent to the rear wheels. We wouldn’t describe this as a sporty sedan though, by any measure, but it does hustle through long sweeping bends with confidence and a level of composure. Push it hard and all of that weight becomes an issue.

The 3.5T AWD weighs in at a hefty 2023kg (tare). It doesn’t like tight switchbacks and wallows and wobbles if you really try to chuck it around, relative to the Euro rivals. However, in Europe twisty mountain roads are common, whereas in Australia we tend to journey on long open highways more of the time. So, in that sense, the G80 is closer to its natural habitat here. 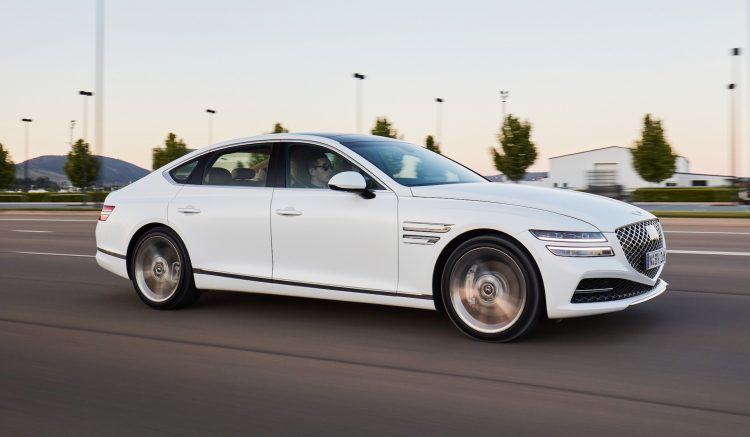 This is a really great product, and nice and fresh for a segment that is not only dwindling in terms of sales and popularity but also a category that is often segmented by blurred lines, with indistinguishable designs and features between them.

The 2.5T is surprisingly peppy, so our recommendation is not to automatically discount it just because it has the smaller engine of the two-tier lineup. In saying that, the new 3.5T is wonderfully smooth and delivers its credentials majestically.

For us, the standout, regardless of the variant, is the interior. Genesis has done a fantastic job in here by blending smart new technologies in a way that doesn’t detract from the properly pampering atmosphere. In some ways it rekindles a traditional luxury experience by being more about comfort, light, and space, above anything else. Not that the details aren’t exquisite.