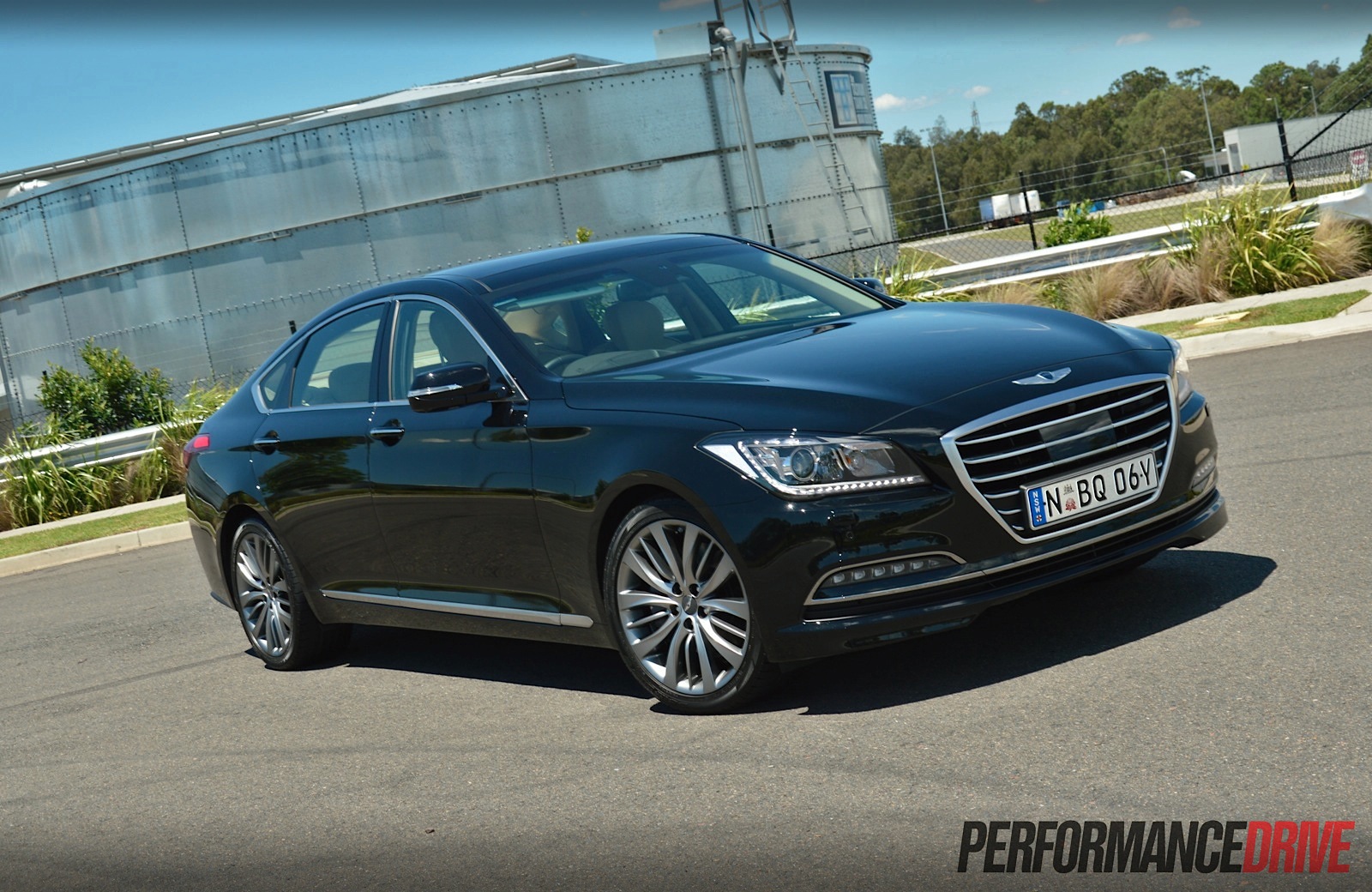 There’s no doubt Hyundai has come a long way in terms of its vehicle standards, efficiency, and overall performance over the years. Now it wants to compete against the big guns, though. With this, the 2015 Hyundai Genesis. Can something with a slanted H symbol really be a match for a BMW, Lexus, or Mercedes-Benz? 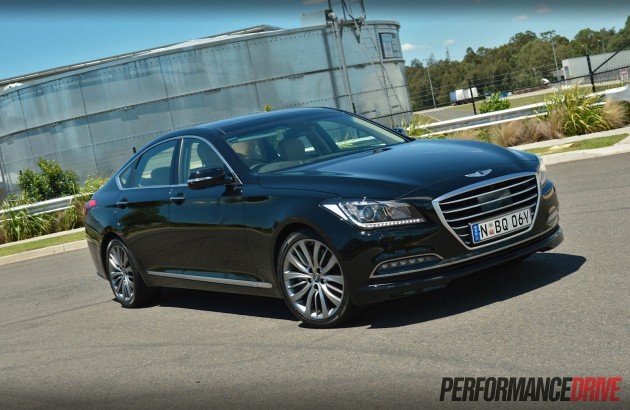 The Genesis is an all-new model for Australia. In the US and other overseas markets, Genesis has been a kind of sub-brand since 2008. It’s almost like it’s not a Hyundai. There’s no H symbol on the front and there’s even an option to remove the only Hyundai badge on the car, which is on the back.

So what’s it all about then? The South Korea company calls it the most significant, sophisticated and technologically advanced car it has ever made. Underneath you’ll find a similar platform to the one used on the Genesis Coupe – a car which we all thought we were getting in Australia.

Australian customers only get one powertrain layout, consisting of a 3.8-litre naturally aspirated V6 producing 232kW and 397Nm. From there the power goes through an eight-speed automatic transmission and into a rear-wheel drive system. Overseas markets have the option of all-wheel drive and V8 power.

Three trim lines are available, including the base model starting from $60,000, the Sensory Park starting from $71,000, and this, the flagship Ultimate Pack starting from $82,000. At these prices it is more affordable than the competition, but on the flip side it is rather expensive for a Hyundai – a brand renowned for economy and affordability. 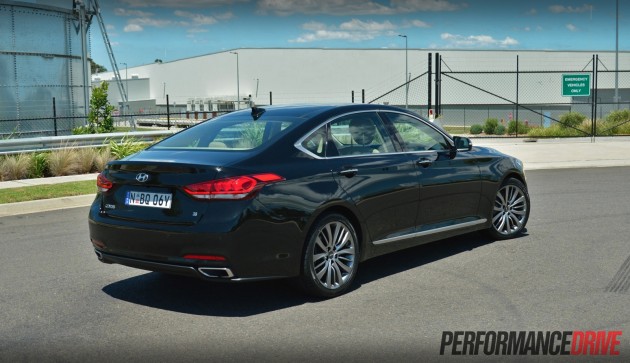 Hyundai says the cabin meets or exceeds the competition in terms of space and luxury. That’s a big claim, but sitting inside it is hard to argue that. In this test car there’s lashings of cream leather over almost every surface which really brightens up the cabin, wood veneers for added prestige, and just the right amount of buttons and gadgets to remind you you’re in something special.

Seating space in the front is huge. The centre console is a large and sturdy chunk coming through the middle, but even with that you feel like you’re sitting in business class on a flight. The large chairs offer mild side bolstering for lateral support, with soft cushioning underneath for superb long-journey comfort. Both feature heating and cooling functions, and both offer full power adjustment.

In the back it’s just as accommodating. You can flip down the centre armrest to expose a whole suite of functions, including for the climate control, audio control, and even controls to move the front passenger seat – kids could obviously have a lot of fun with that. Legroom is at least on par with vehicles like the Lexus GS and BMW 5 Series, while headroom is slightly sacrificed due to the swooping roofline. You need to be really tall for this to be an issue though. 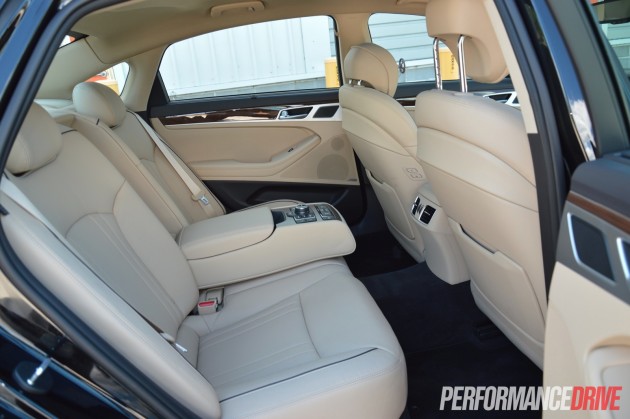 As for the standard equipment, Hyundai has packed the Genesis full of every technology and every convenience item it makes, and some. All three variants come with a 9.2-inch infotainment display wired up to a 17-speaker Lexicon sound system with multi-format support. There’s also one-touch power windows all around, a power rear blind, and an electronic boot lid.

Going for the Ultimate Pack gets you a 7.0-inch digital instrument cluster display, head-up display, a full panoramic glass roof, heated rear seats, special noise-cancelling glass, and cool soft-close doors that automatically pull the door shut when it touches up against the latch (see video below).

It definitely feels and looks like a high-end car inside. Hyundai was kind enough to lend us two examples for this writer’s wedding, and all of the bridal party thought they were Lexus cars and one guest thought they were “that Aston Martin sedan that they have”. The only minor issue we had with the interior was with the sat-nav, which decided it wanted to “fail to authenticate” and no longer work about halfway through our test. The upper half of the dash and the steering wheel also seems old to us, in terms of design.

Finally, the Genesis boasts the highest-ever ANCAP safety rating. Although this doesn’t technically mean it is the safest car on the market; it means it handles the specific crash tests better than any other car. Regardless, it is a standout achievement for its résumé. It comes with nine airbags, autonomous emergency braking, radar cruise control, an on-board tyre pressure monitor, HID headlights, and a rear-view camera, all as standard. 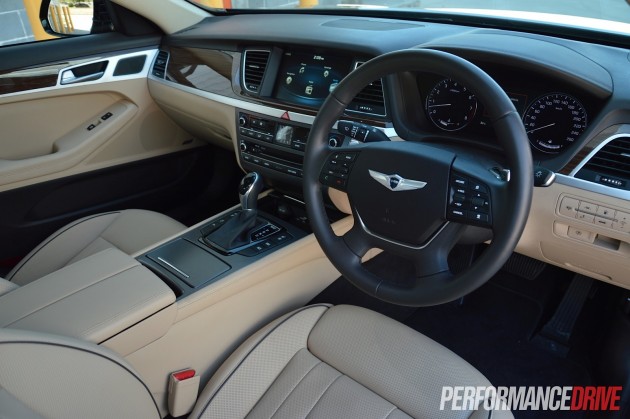 If you’re in the market for a large luxury car like this it means you want to be comfortable and pampered while you drive along, right? The Genesis is one of the more soothing propositions in this market space in our opinion. The suspension and ride is more to the soft side, which means highway cruising is extremely relaxing. It just wafts along. And with the noise-reducing glass of the Ultimate Pack, it is also whisper quiet.

Around big bends the Genesis is calm and gentle, yet confident and rather planted in its tracks. That’s because the chassis of this car is dynamically sound. Hyundai Australia has engineered the suspension in Australia for Australian conditions too. It took the local development team 42 different suspension configurations, including going through 19 front and 13 rear damper options, to come up with a package it felt was suitable for Australian buyers. And it shows.

The Genesis irons over bumps really well and remains composed and confident. And then when it comes time to turn, mid-corner bumps have a hard time unsettling the car. Communication through the steering wheel is satisfactory in a sense that it’s not too busy or frigidity to disturb your peace and quiet, but not quite as precise or as engaging as the setup in the BMW 5 Series or Lexus GS.

For sportier drivers, we think the suspension setting is too soft. It tends to bounce softly along highways like a bit of a boat, and then around corners – especially tighter ones – there is noticeable body roll and a lack of body stability. Fortunately, the underpinning chassis comes to the rescue. We wrestled the Genesis down our usual technical route and it responded, motivated and ready to go. Once you’re aware of the body roll and understand that it is limited, you can feel the chassis working underneath in your favour. It is surprisingly fit and agile when you really push it through some bends thanks to tight and taut foundations, even despite its hefty 1945kg weight.

Speaking of pushing it, the 3.8-litre V6 produces nice velvety power. It’s smooth and responsive, and produces an angry little roar when it opens its lungs. Maximum torque is high for a naturally aspirated V6 but it doesn’t come in until 5000rpm, which is very high by today’s standards. This doesn’t tend to be much of a problem as the eight-speed auto does a great job of finding the right revs for the right situation. Additionally, Hyundai says 90 per cent of the torque is available between 2000rpm and 6000rpm.

We timed 0-100km/h in 6.7 seconds. It’s not the briskest luxury six-cylinder sedan in this segment, nor is it the most fuel efficient. It does perform proudly though and with a certain majesty about it, and all in sync with the rest of the car.

We did experience another technology flaw during our test, aside from the sat-nav giving up; the radar cruise control. This is an advanced feature that uses radar sensors to monitor the forward-moving traffic in front, and the car adjusts the speed using the brake and accelerator all by itself. A number of high-end manufacturers have similar systems. The sensitivity of these sensors can be adjusted in the Genesis, which is good. However, during our test it did automatically brake the car quite suddenly at highway speeds a number of times because it thought a car in another lane was in front of us. We think the system here is a bit crude compared with rival systems. 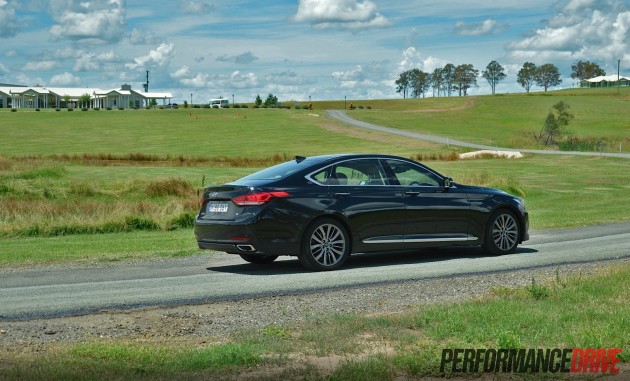 This is a great product, and not in a sympathetic ‘it’s good for a Hyundai’ kind of way. If it had a Lexus badge on it or whatever else, you’d give it the same respect. It deserves to be on anyone’s luxury sedan shortlist. Its qualities are the relaxing ride and genuinely decadent interior, and the sheer packaging.

The price is also worth crediting because it is cheaper than the typical high-end rivals yet equally or better equipped, and it is more complete and overall a superior proposition compared with cheaper rivals like the Holden Caprice and Chrysler 300. To answer our original question, if you’re in the market for a car like this, we strongly recommend dropping the Hyundai stereotype and taking one for a test drive. You’ll be pleasantly surprised.

CONS:
– Thirsty V6
– Some technology flaws
– Heaviest in its class 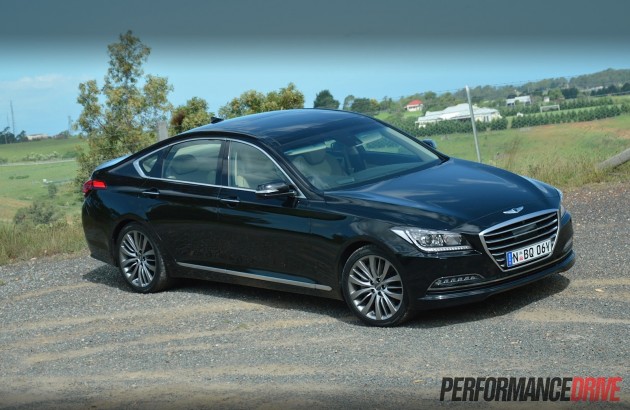