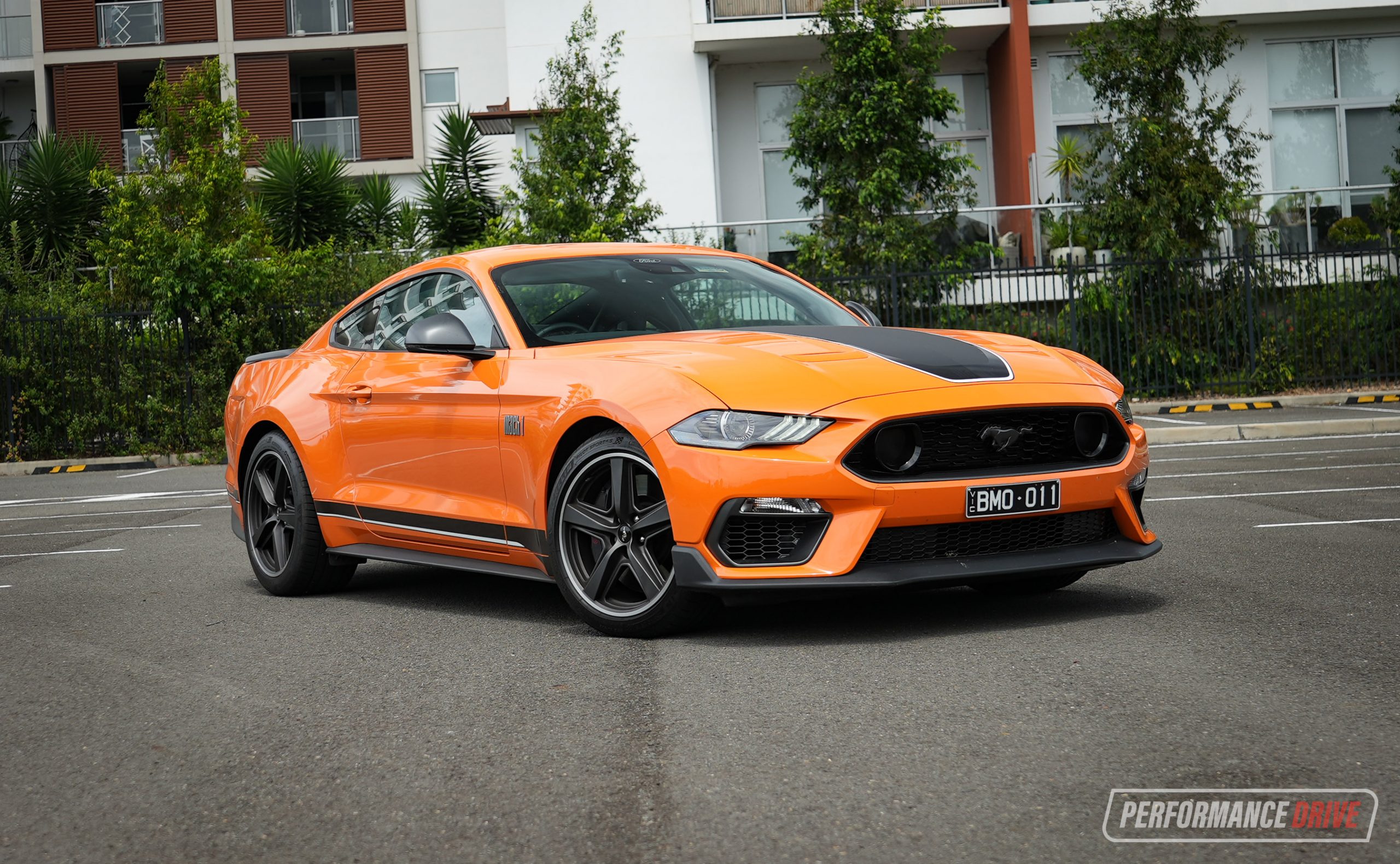 Welcome to the 2021 Ford Mustang Mach 1. No, it’s not the classic model. This is a limited edition version of the latest Mustang GT. It celebrates that original icon, while showcasing various tasteful enhancements all in name of improving performance and handling. 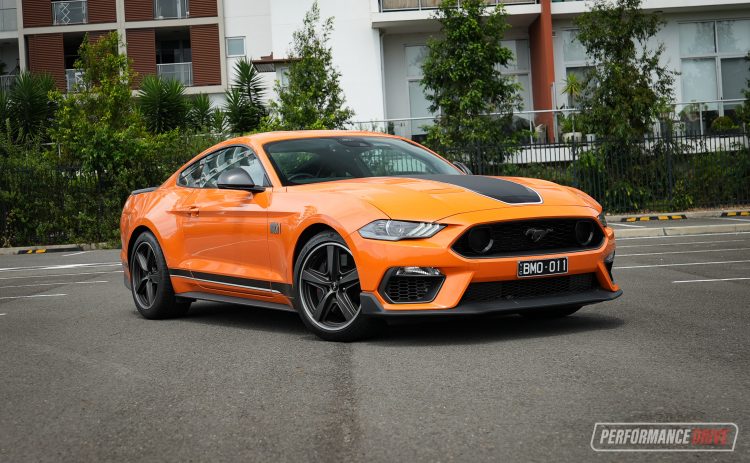 We’re bit late with this one actually, because Ford has already sold out all 700 examples destined for Australia. Nonetheless, we thought you might like to see how it performs. And yes, we also wanted an excuse to test it. We’re sampling both the manual and automatic versions. 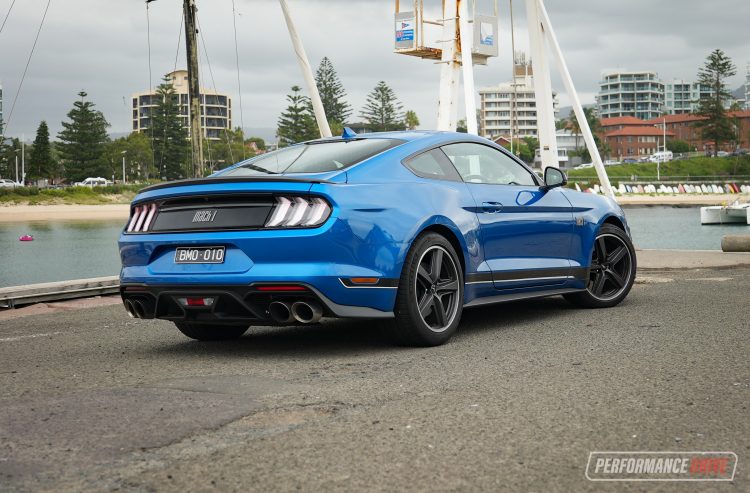 For the exterior, Ford has applied a unique aero package which actually increases downforce by 22 per cent over the regular GT. There’s a deep front splitter and big ‘nostrils’ in the grille, a lip spoiler at the back, and a rear diffuser similar to the one used on the Shelby GT500 overseas.

We love these gunmetal grey special edition wheels, which make it instantly recognisable as the Mach 1. They’re half an inch wider than the GT wheels, and come wrapped in Michelin Pilot Sport 4 S tyres, measuring 255/40 on the front and 275/40 on the back. 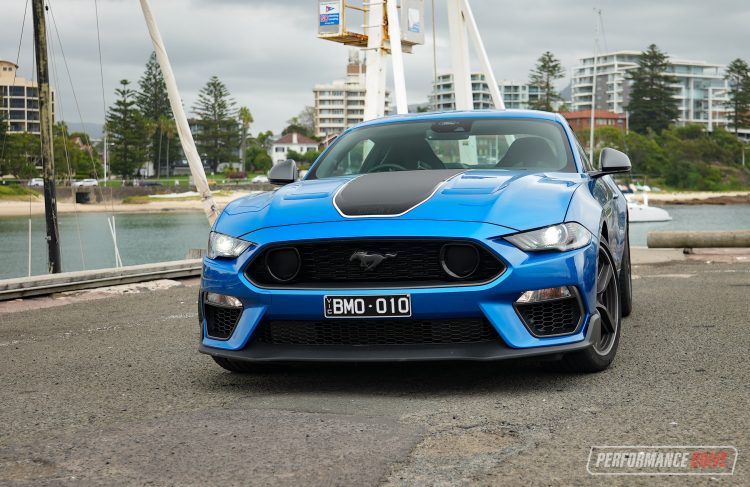 The manual example we have here is coated in Twister Orange, while the automatic version is featured in Velocity Blue. If you want to stand out, the orange colour certainly pulls a lot of attention on the road. In contrast, we noticed the blue can be surprisingly discreet in traffic, not drawing as much attention as the orange.

The interior is pretty much the same as the GT except for some ebony and metal grey highlights. Buyers could also option up to Recaro sports seats, as featured here, which offer electric slide adjustment and provide great support and comfort. A special plaque on the passenger side of the dash helps to signify its… significance. 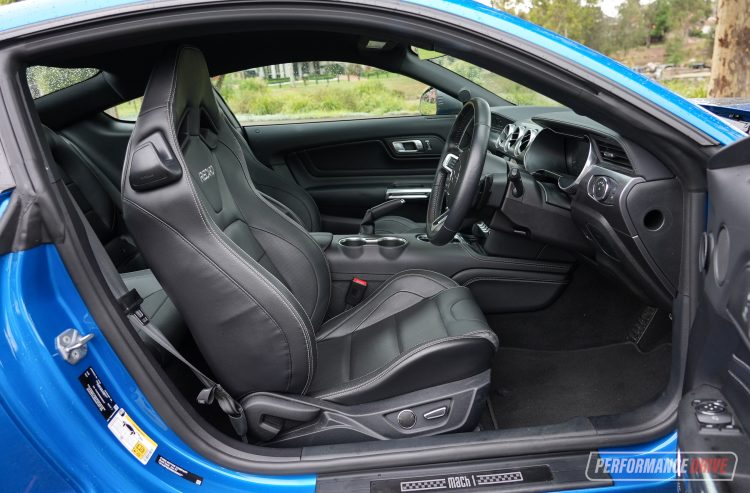 Ford has done well to create an open and airy cabin for front passengers, and there are a few storage areas so it is reasonably practical for a two-door sports car. There’s also a decent touch-screen on the dash running Ford SYNC 3, along with a powerful B&O 12-speaker sound system as standard.

In the back, however, the space is very tight. It is possible to get two adults in there but it is a harsh squeeze and requires the front seats to be moved forward to a considerable degree. It’s obviously a good thing there is no middle seat available as the centre driveline hump takes away most of the space. 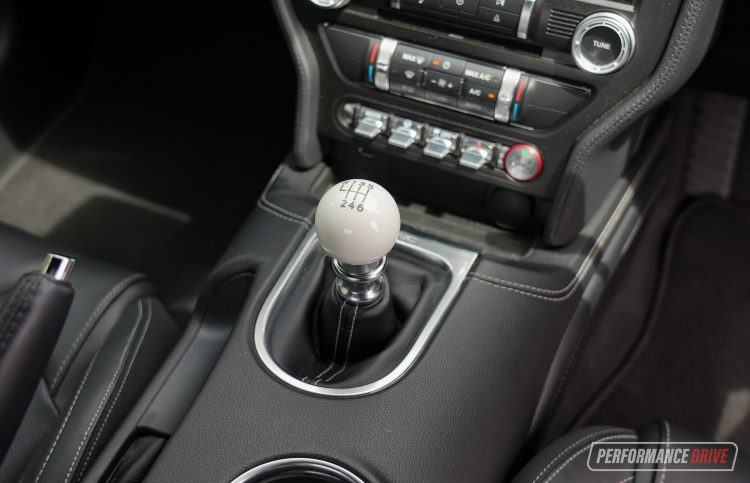 Over in the manual it is of course exactly the same inside. But you do get a cool ball-type short-shifting gear lever. The gearbox is a heavy-duty Tremec unit and uses a twin-disc clutch allowing proper flat-shifting capability without lifting your foot from the accelerator, according to Ford.

Boot space is no different to the regular Mustang GT, in that, it is quite a useful space. There is a sub-woofer neatly tucked away to the side, but at 408 litres in total, there is enough room to support a decent shopping trip or even some golf sticks. Underneath you will not find a spare wheel, only a repair kit. 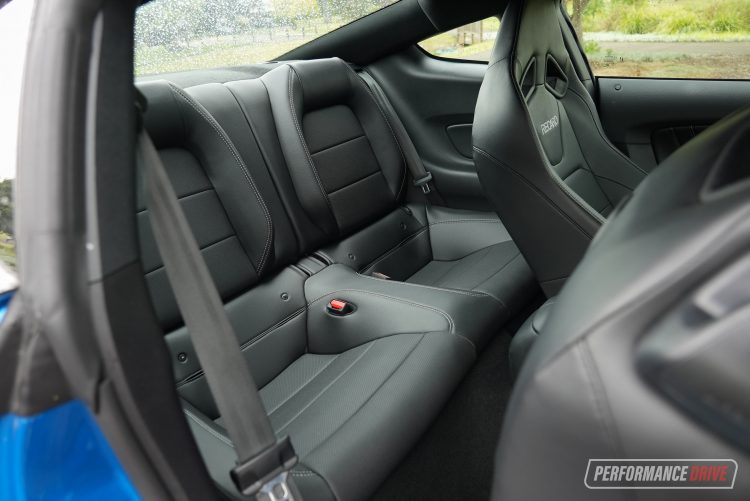 So, what changes have been made to improve handling and performance? And have they worked? Firstly, the suspension is given a complete overhaul. It includes MagneRide adjustable dampers so it is immediately more versatile, as well as stiffer front springs and stabiliser bar. The electronic power steering has also been retuned for better response. Overall, Ford calls it the sharpest-steering Mustang ever offered in Australia.

Out on the road you can definitely feel the improvements in handling. It’s more responsive and feels more agile and eager in the bends, and it holds on much longer before slipping, no doubt thanks to those wider Michelin tyres. However, we’re still not a fan of the heavy-set steering. It lacks engagement and communication in our opinion, resulting in some vagueness and reduced confidence behind the wheel compared with other sports cars. 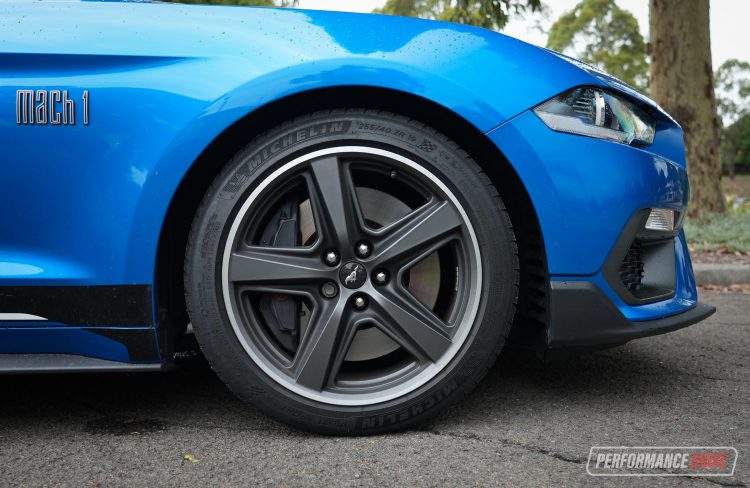 It is lots of fun to drive though, in either manual or auto form. The auto, with its 10 gears, kind of behaves like a high-stall in a modified street machine. The revs are always high, like it’s ready to cut a sick burnout at any moment. Some tweaks have been made to the auto transmission for the Mach 1 too, with an uprated oil cooler installed and recalibrated software to further optimise performance.

The manual is very manly and chunky. We noticed it can be a bit notchy when it’s cold, but that could be isolated to this test car only. Otherwise it feels solid and really nice to throw back and forth. The ratios seem well spaced, allowing you to snatch the next gear and keep the roaring momentum going. Muscly legs are not needed to operate the heavy-duty clutch, but they would help during longer journeys.

As for the engine, it is a tuned and tweaked version of the naturally aspirated ‘Coyote’ 5.0-litre V8 from the GT. Thanks to an open-air air intake and pod-style filter, 87mm throttle body, and recalibrated engine software with the redline extended from 7000 to 7500rpm, the unit produces 345kW and 556Nm. That’s up from 339kW (same torque). 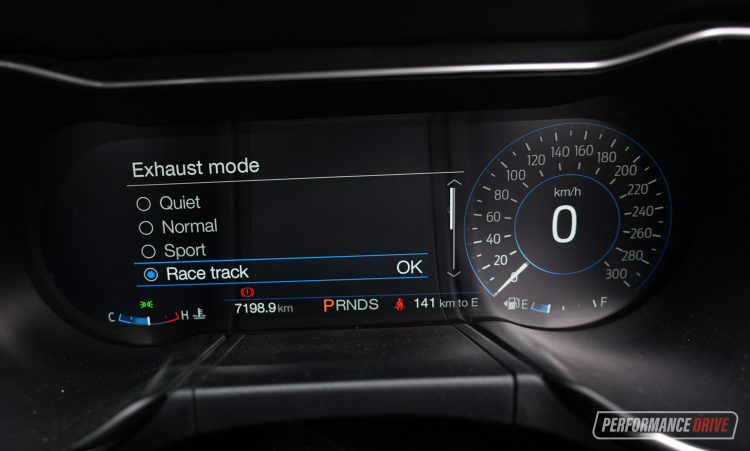 Performance is pretty much perfect. Sure, there are more serious options out there and even aftermarket supercharger kits and so on. But, to us, this is exactly what you need in a sports car. It’s a car that lures you in for a Sunday drive just for the sake of it. It is, perhaps more importantly, quite friendly and approachable as well, so you can actually enjoy all of those revs and have fun without spinning away the tyres.

This engine produces a lovely deep bellowing soundtrack too, that just keeps revving and roaring the more you push it. There are a number of exhaust modes to select from within the instrument cluster, but to be honest, we couldn’t really distinguish a big difference between them. Regardless of the mode the engine produces a proper jackhammering engine sound, while the exhaust note at the back compliments it.

It doesn’t offer the most refined drive experience, even though enhancements applied to the Mach 1 have provided noticeable improvements in dynamics and on-the-limit grip, rather, we think it’s important to continue to celebrate and enjoy V8 muscle cars while they last; they are a dying breed. If it weren’t for cartoonish options like this, the new car market would be a very boring place indeed.

CONS:
– Still a bit of a pig to drive, heavy-set steering
– Pretty useless rear seat
– All sold out 🙁