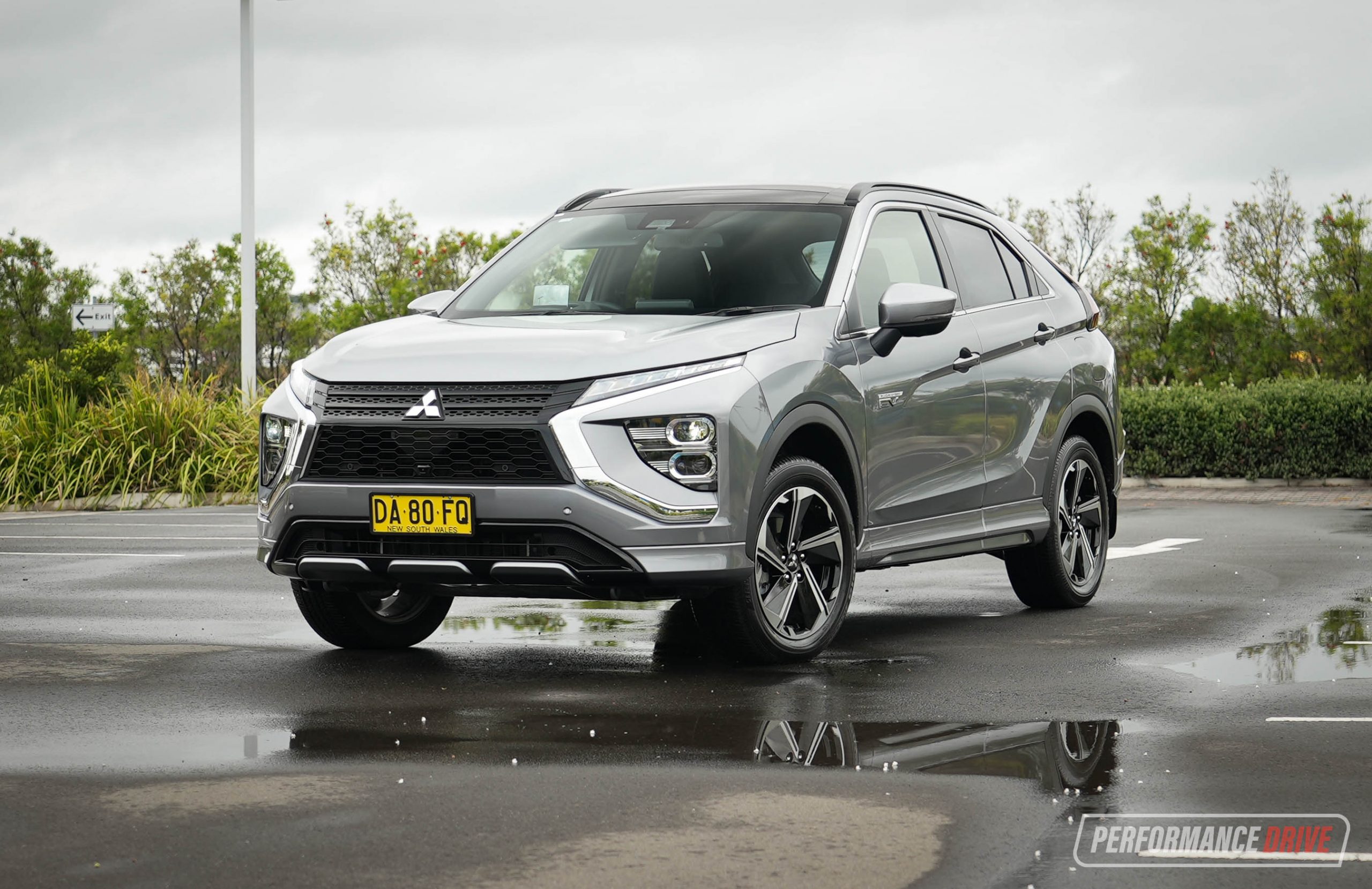 In today’s ever-competitive world of compact SUVs, it can be difficult to stand out from the crowd, which is where today’s protagonist enters the equation, the 2022 Mitsubishi Eclipse Cross PHEV Exceed. 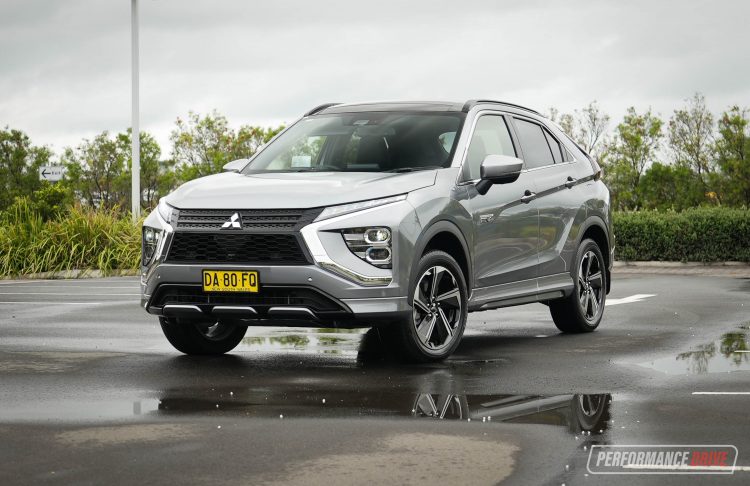 It’s billed as a best-of-both-worlds offering within the compact SUV market, combining the potential for zero-emissions daily driving with the flexibility of a petrol engine for peace of mind and potential for unimpeded road trips. Plug-in hybrids are no doubt the best way to ensure mass adoption of EVs in the future, but just how capable are they in their current form?

The standard Eclipse Cross has no doubt proven itself in its class, remaining as a popular contender, but the major question lurking in the air is just how well does the plug-in hybrid variant perform on the road, and how well does it justify it’s achingly-high price tag?

The regular 1.5 turbo lineup kicks off from $30,990, while the entry-level Eclipse Cross ES PHEV is priced from $46,490, marking a steep premium over the internal combustion version. The PHEV lineup is split into three grades, with the ES superseded by the Aspire – priced from $49,990 – which is topped by our review car, the Exceed PHEV from $53,990 (all excluding on-roads). 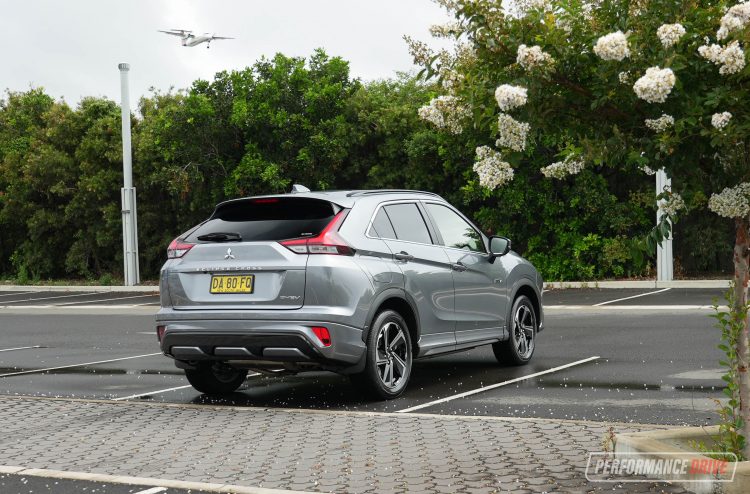 Moving to the Aspire adds a set of front-mounted parking sensors, adaptive cruise control system, surround-view camera, dual-zone climate control, suede/leatherette upholstery, as well as a set of heated seats up front and an upgraded eight-speaker sound system. The range-topping Exceed builds upon these features, and comes packaged with a set of LED headlights, head-up display, leather upholstery with heated seats and a heated steering wheel, as well as a split panoramic sunroof. 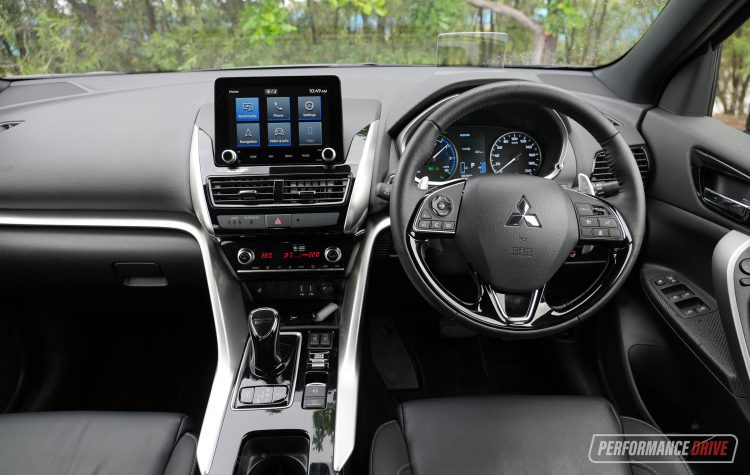 The front seats are extremely comfortable, with a predominantly black interior with some silver accents around the central transmission tunnel providing a mildly classy feel. In our opinion, there’s nothing to get particularly excited about in the cabin, with lots of gloss black frustratingly showcasing every spec of dust accumulating in the cabin.

Space and comfort is great for this segment, although the electronically-adjustable seats do lack lumbar adjustment. While the windscreen is quite narrow, the dash sits low enough to give you a clear view of your forward surroundings. Unfortunately, the massive rear three-quarter blindspot that seems to plague almost every compact SUV is noticeable here, too.

The 8.0-inch infotainment system is undoubtedly the weakest point of the interior, and while it receives Apple CarPlay and Android Auto support, the quality of the display, size, graphics, and hardware are clearly lacking for a car at this price point. The slightest slither of sunlight overwhelms the brightness of the display as well. 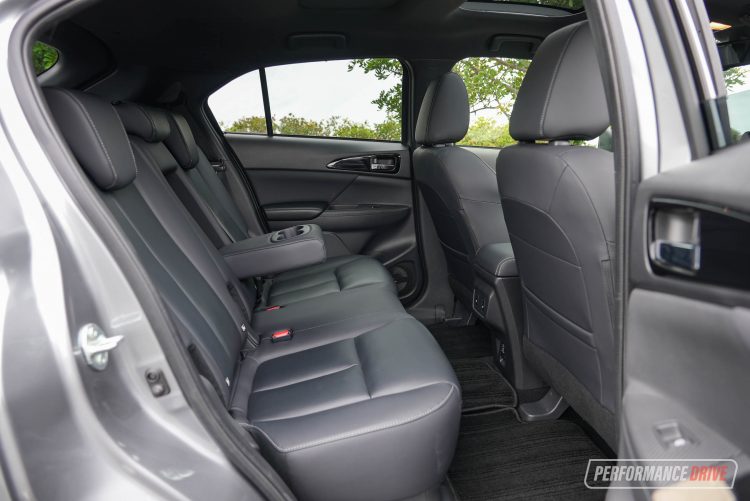 Moving to the rear of the cabin, there’s actually a decent amount of space for rear passengers. The Eclipse Cross seems to strike an interesting balance between a small and medium-sized SUV, offering significantly more legroom than you’d find in a number of its key rivals. Headroom is tight for tall passengers due to the sloping roofline design, however, the bench does recline to provide some versatility. Overall, the Eclipse Cross remains an impressively comfortable option for growing families with teenagers.

In terms of practicality, the Eclipse Cross PHEV has the usual set of storage in the door bins either side, a small storage area behind the gear lever for smartphones and a folding armrest with a decent amount of storage for the loose items that families accumulate. ISOFIX anchors can be found at the base of the outer rear seats, although the narrow door pillars require some squeezing for big, bulky child seats.

Finally, in terms of cargo capacity, the Eclipse Cross PHEV’s boot is rated at 359L, which is smaller than the 405L on offer in the petrol AWD variant. This is due to the packaging of the rear electric motor underneath, however, there is some under-floor storage as well. 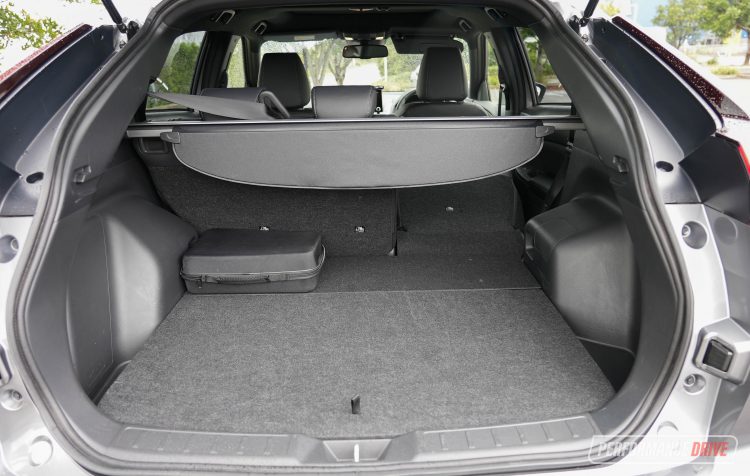 Now that we’ve covered the equipment on offer in the Eclipse Cross PHEV Exceed variant, it’s time to talk about engines, both the driving experience and efficiency, as well as the comfort levels on offer in this premium-priced plug-in hybrid SUV.

Mitsubishi has transplanted their plug-in hybrid technology from the Outlander PHEV into the more compact proportions of the Eclipse Cross. This means that there’s a 60kW/137Nm electric motor over the front axle paired with a 70kW/195Nm over the rear axle. These e-motors are accompanied by a 2.4-litre four-cylinder petrol producing 94kW/199Nm that can power the front wheels and charge the onboard 13.8kWh battery pack. 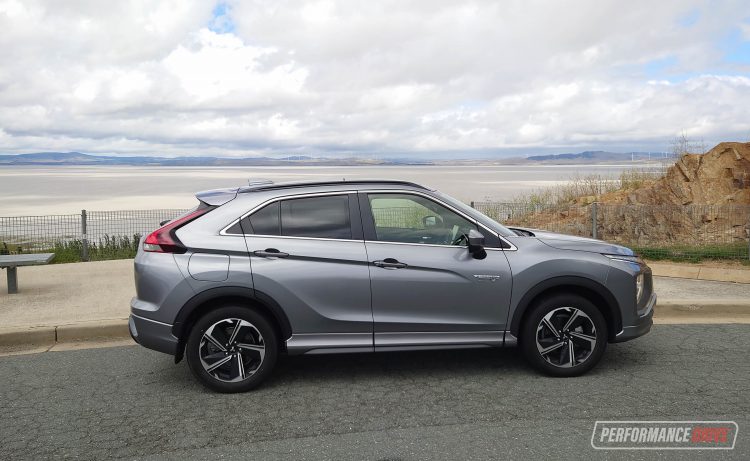 Mitsubishi’s plug-in hybrid electric system offers 55km of pure electric driving, meaning that, in theory, a daily commute could be handled on EV power alone. In our time with the car, that 55km claim seemed optimistic, with our overnight charges translating to anywhere between 25-40km of pure EV driving. These figures are, however, impacted by how much highway driving and stop-start traffic your commute might involve, so you may well be able to match Mitsubishi’s 55km claim.

In terms of the driving dynamic, the e-motors add to the urgency of the Eclipse Cross’s acceleration, with the added torque offering short, sharp bursts of acceleration up to speed, making it perfectly suited to driving around town.

The Eclipse Cross PHEV also receives a regenerative braking system with five levels of adjustment through the wheel-mounted paddles. We enjoyed playing around with these while on the move, trying to anticipate slow-downs and braking points to feed as much juice back into the battery pack as possible while trying to avoid the friction brakes altogether. This made the Eclipse Cross more engaging to drive than something like a Toyota RAV4 hybrid, in this specific area, and became somewhat of a fun, consistent challenge over time. 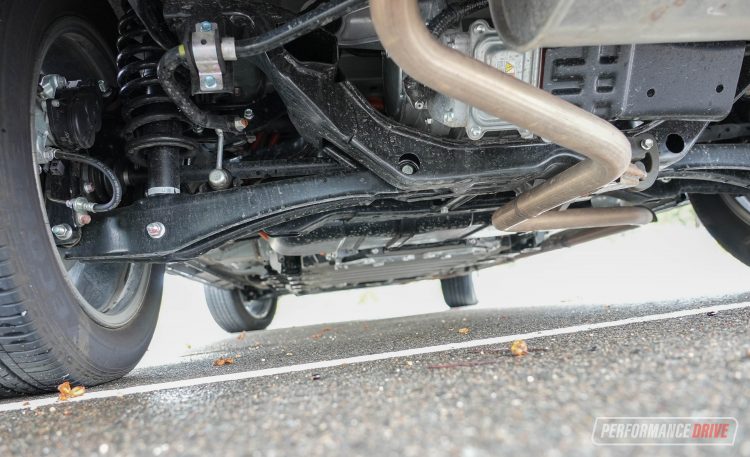 To deal with the 300kg of added weight from that battery and pair of electric motors (1895kg kerb weight), Mitsubishi has revised the suspension system over the petrol Eclipse Cross. The ride quality is actually one of the highlights of the package we think, and continued to surprise us as we left the smooth city streets – where it absolutely excels – and headed to the countryside.

The hefty Eclipse Cross PHEV is an absolute peach when it comes to driving on country B-roads, with a long-range damping system that eats up potholes and rough surfaces, with barely any disturbances transmitted back into the cabin. We are genuinely surprised at just how effective Mitsubishi’s suspension revision is on the PHEV variant, and the end result is truly one of the most comfortable compact SUVs you’ll find on the market.

However, with soft suspension the handling isn’t as sporty or as responsive as many other SUVs in this space. It can feel a bit flimsy and ‘rocky’ switching between tighter corners. Obviously this is not a sports car, but we noticed more body roll than in most of the key rivals. Steering feel and communication levels are adequate, if a little primitive. But at least it is user-friendly and easy to judge on the road. 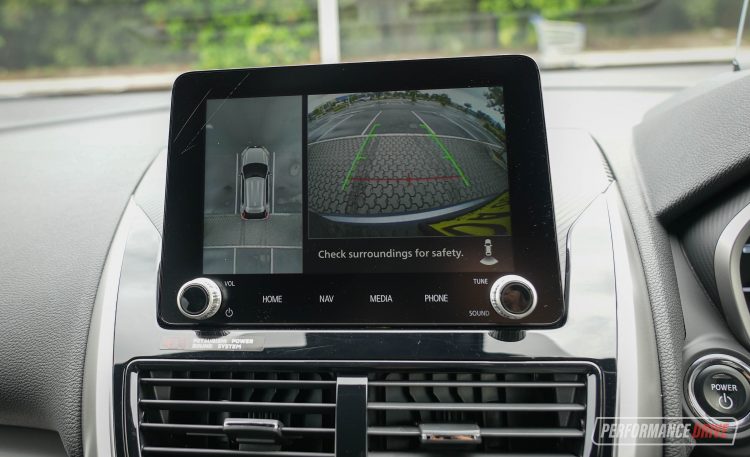 Better still, when you make your way back into town, the Eclipse Cross retains its user-friendly hallmarks when it comes to parking and low-speed manoeuvring thanks to the lightweight steering, ensuring the PHEV remains an approachable vehicle for less confident drivers. While the infotainment system is a gripe of ours, the rear-view and surround-view cameras give the driver a clear line of sight when navigating tight spots, which make it even more attractive as a daily commuter around town.

In terms of outright fuel economy, your figures will depend on just how much juice you’ve got in the battery pack. With a fully-charged battery, you can come close to matching the official average claim of 1.9L/100km. Once you’ve drained the battery, or if you’ve forgotten to charge overnight, though, fuel economy figures jump to around 5L/100km in a mix of town and highway driving.

As a complete package, then, the Mitsubishi Eclipse Cross PHEV is a decent and forward-thinking compact SUV when it comes to driving dynamics and efficiency, both of which are complemented by a quiet cabin and undeniably comfortable ride. Rather than simply transplant a hybrid engine into the standard Eclipse Cross, Mitsubishi has given the PHEV variant a number of clear party tricks and dedicated tuning over the standard car.

As a complete package, the Eclipse Cross PHEV does well to assert itself into the crowded compact SUV market, especially for buyers looking specifically for a plug-in hybrid or super-economical offering.

However, the most generous way we can put it is that the majority, if not all the things we’ve liked about the Eclipse Cross plug-in hybrid variant are available in the cheaper ES and Aspire variants, and we question the need to go for the Exceed with its bells and whistles.

Whether it’s the plug-in hybrid powertrain itself, the exceptionally comfortable platform or the surprising amount of space throughout the cabin, none of these are unique to the Exceed variant, which makes the range-topper a particularly difficult variant to recommend.