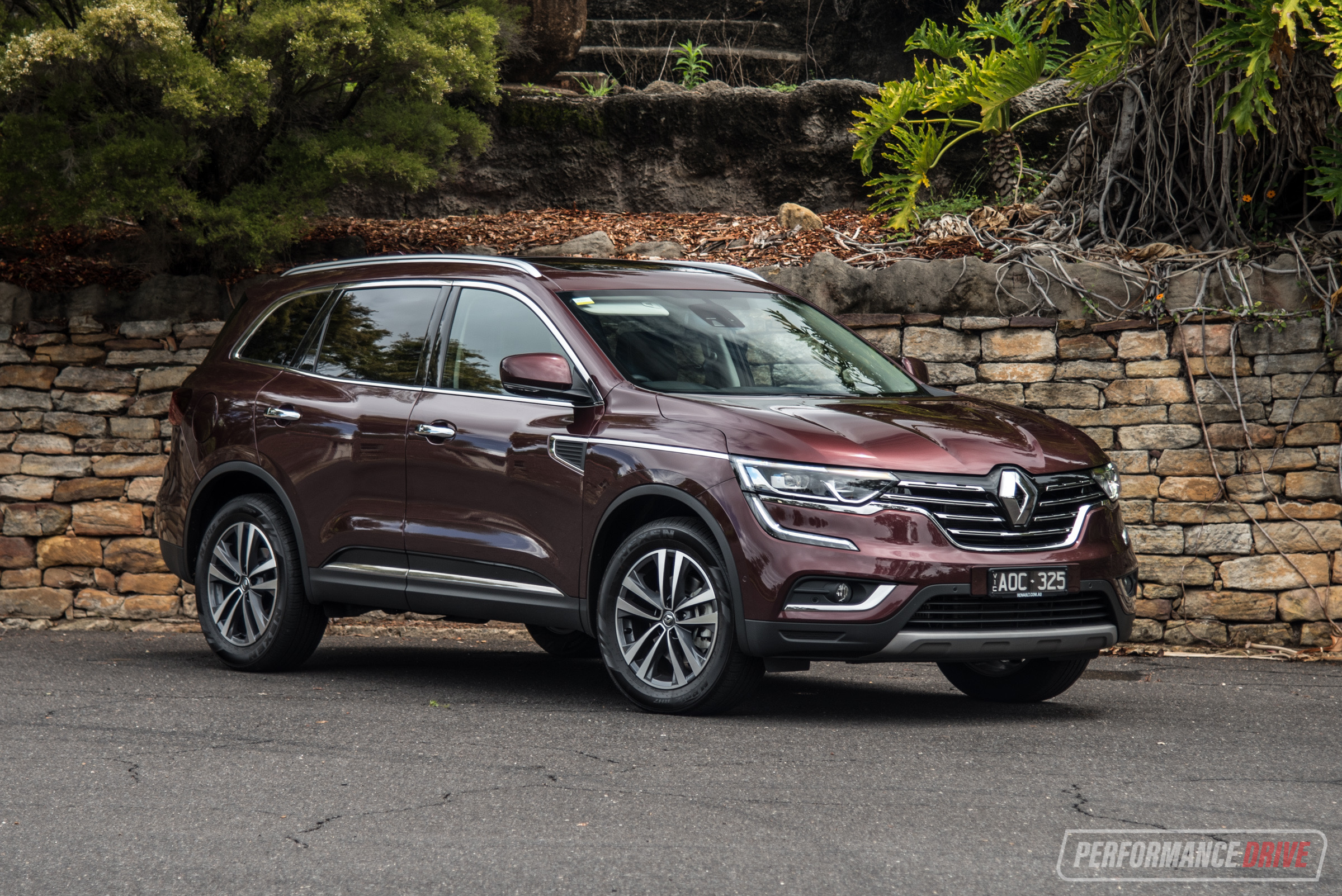 The SUV market is by far the fastest growing market in the business. That also makes it one of the hardest to crack into. There is now a myriad choice available at merciless price ranges. But there is one that has slipped under the radar and it may not have crossed your mind; the Renault Koleos. 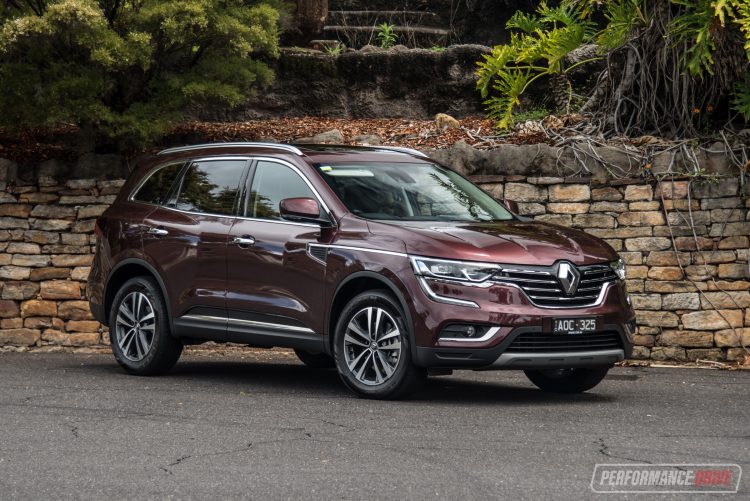 You can be forgiven if you thought Renault has always been a European brand, that sells Euro-made cars; which naturally attracts a higher price tag. But the Koleos is built in South Korea at Renault-Samsung’s Busan plant, and it shares the same platform as the Nissan X-Trail. This enables it to enter the market as one of the most affordable SUVs of its size.

The range begins with the 2WD Life for a frugal $29,990, then the Zen – available in 2WD and 4WD – and at the top is the Intens, where both petrol and diesel engines are on offer – both in 4WD only. Our test undertakes the new Intens diesel, which is priced from $46,990 (excluding on-road costs). 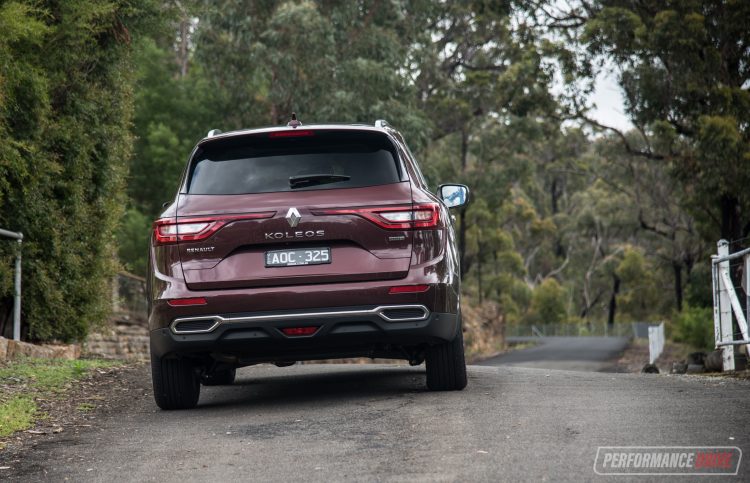 The base model Life is packaged with a modest amount of technology for its price. It comes with the basics, as well as a tyre pressure sensors, auto wipers and headlights, partial digital instrument cluster, rear parking sensors, reversing camera, an eight-speaker sound system with AUX, USB and Bluetooth, and LED daytime running lights.

Interior comfort and space is admirable for a medium-size SUV. There are vast amounts of storage throughout the cabin. However, the centre cup holders are a stretch for a 600mL bottle of water. On the comfort perspective, the front seats are a little on the firm side, and this becomes more of an issue when driving long distances. 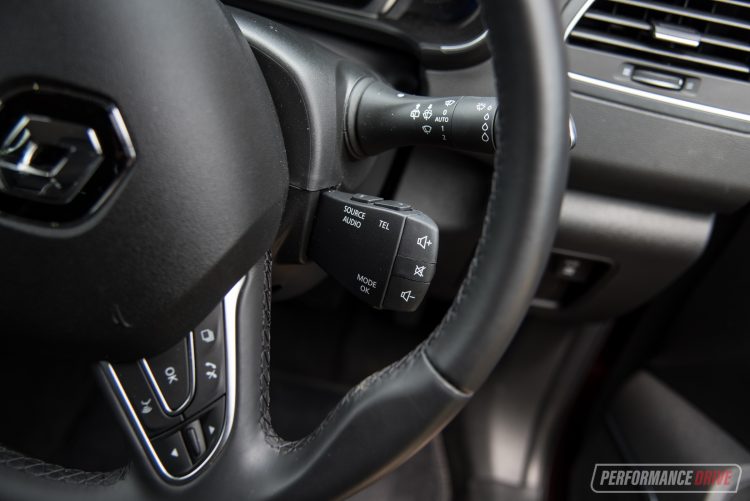 As for interior design, it would be best described as quirky, modern, and chic. We test a lot of vehicles here at PerformanceDrive, so it’s not unusual for us to be scrambling around the cabin, searching for buttons and controls. But in the Koleos, it has one of the most bizarre placement of buttons.

For example, audio controls are not on the steering wheel. Instead, there is an extra stalk behind the wheel, but you cannot see the buttons at certain steering wheel positions. Add to that, some of the audio buttons only work when you are in the audio or home menu on the main media screen. Mind you, these buttons don’t perform any other functions while in other menus. The cruise control and speed limiter buttons are also placed on the centre console, near the cup holders, and then the speed adjustment is on the steering wheel. This is very unusual and does take some getting used to.

Navigating the menus in general, is not as simplistic as it can be in rivals. We like the portrait positioning of the large touch-screen, but finding your way through to the right command simply takes too long. You need two or three buttons pressed to get to climate control settings or audio functions, for example. Another oddity is the naming of some buttons. On the steering wheel, there is ‘O’ and ‘R’. Through trial and error, it turns out these buttons are to do with the cruise control functions. 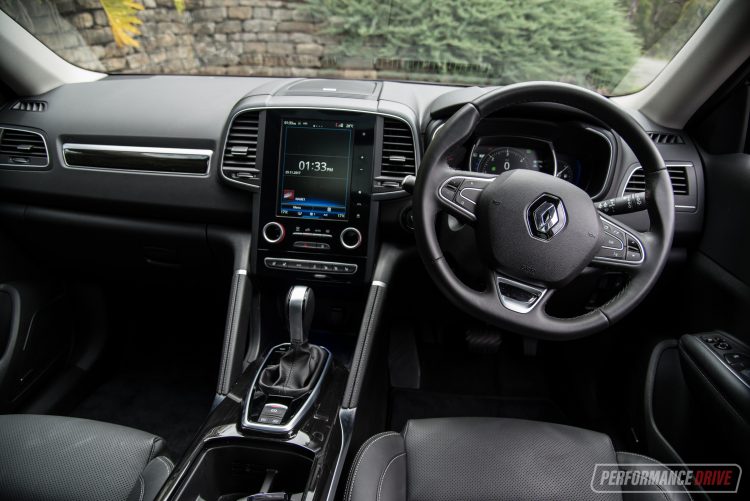 Overall, some materials used in the interior come across as a little inferior in quality compared with the top rivals, such as the CX-5. But there are some quirks that stand out for positive reasons. Like the customisable interior lighting and colours for the mostly digital instrument cluster and touch-screen. And there are a lot of them, too. There are strips of bright lights along the doors and shining into storage spaces, and various layouts to choose for the instrument cluster and centre screen. Fun? Or tacky? You choose.

This somewhat peculiar and uncanny design also flows out to the exterior, where random light shapes and jagged lines are adopted from front to rear. You’ll either love it, or hate it, depending on your taste. Either way Renault has done well to mask any hints of Nissan X-Trial in the identity.

Boot space is one of the largest in its class. Expanding from 458 litres to 1690 litres with the second row flat, this makes it bigger than Mitsubishi Outlander’s 1608 litres, and Honda CR-V‘s 1084 litres. Accessing the boot with the electric tailgate is hassle free, and it’s refreshing to have no incessant beeping when it’s in operation if you happen to return home late at night. 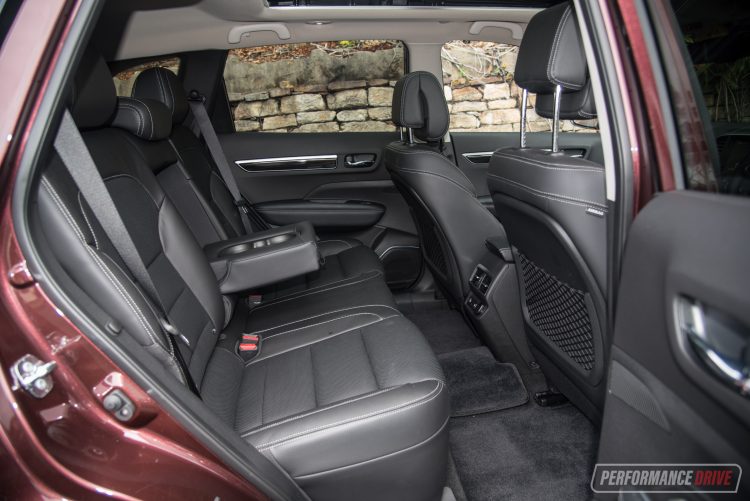 The Koleos Intens in diesel guise has the more likable engine of the two on offer. At 130kW and 380Nm, it provides more power, torque, and greater fuel efficiency than its petrol twin. Behind the wheel, this equates to a confident SUV for getting up to speed and overtaking with ease. The torque tends to be noticed more than the power in the way it handles steep hills with a minimum of fuss.

No matter which Koleos you opt for, all models are fitted with a CVT automatic transmission. And like most CVTs, the one here doesn’t offer the most exhilarating experience. It does the job that will be required by most, but the uninspiring sound of the engine, and the lack of connectedness you gain from conventional gears might have you looking elsewhere if you would like something more sporty and enthusiastic. Renault claims to have avoided the ‘rubber band effect’ you get from CVTs by providing a wider ratio spread, and out on the road it is a pretty smooth powertrain. 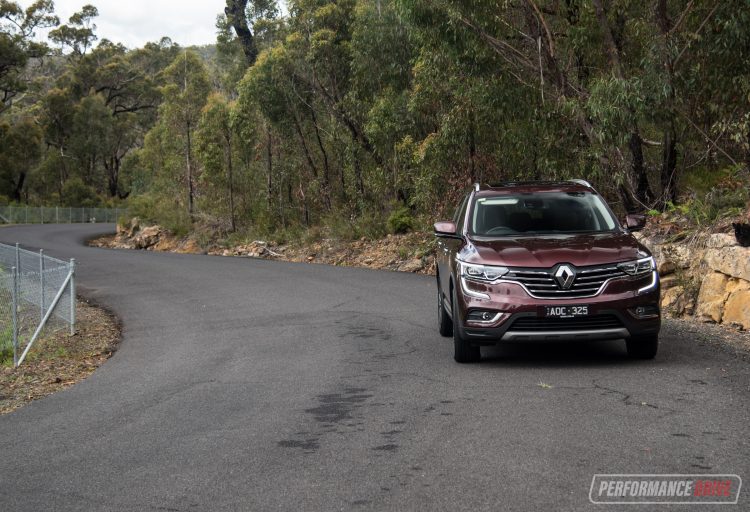 There is no performance mode with the CVT, but you can select manual mode with a gear shift to the left. It will then create imitation gear stages. An ‘eco’ button can also be found, which changes the accelerator sensors and winds down the air-conditioning to make it more economical.

The Koleos diesel officially rates a mixed driving average of 6.1L/100km. Our testing revealed an average of 6.8L in the real-world, which is pleasing for an SUV of this size. And you get the added benefit of not needing to visit your fuel station as regularly. You should be able to achieve about 850km of driving before the fuel light goes on.

Rated at 1650kg, the towing capacity for the ‘French’ SUV is better than some other medium-size SUVs on the market. For example, the Honda CR-V is rated 1500kg. 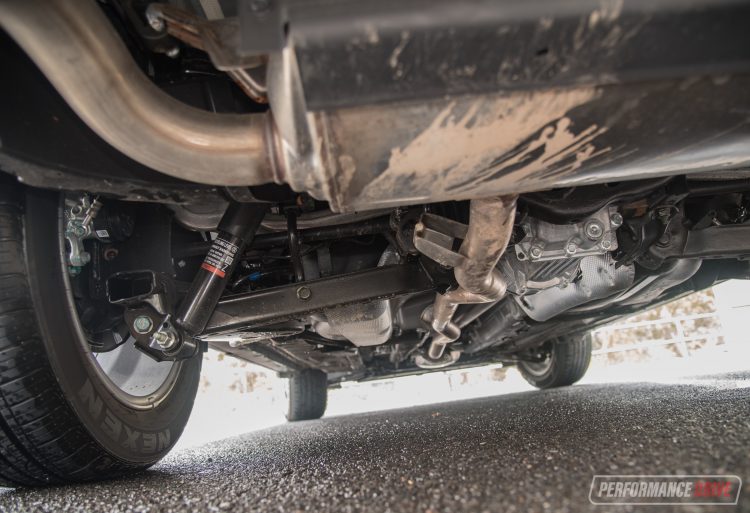 On the road, the Samsung-made suspension is supple enough to absorb shallow bumps impeccably. But with tough Aussie roads, the deeper holes can throw the car off guard. Around corners, the degree of body roll is kept to a minimum. However, the cheap and nasty Korean-made Nexus tyres are the first to give out anyway.

Full-on off-road trekking performance is not what the Koleos is about. There are 2WD and 4WD modes at the flick of a switch, which is handy as you can keep in in 2WD mode when you know you’re just travelling on the motorway, to save fuel. When in 4WD mode it has the capability to transfer zero to 100 percent of power to the rear wheels, when needed. This makes it a perfect contender for weekend escapes on rougher-than-usual unsealed roads.

All Koleos models come with a five-year unlimited kilometre warranty, five-year roadside assist, and servicing intervals are scheduled only every 30,000km or 12 months. This does provide some assurance in the future, and it does give the Koleos a serious edge over its rivals.

The French brand’s best-seller is an easy-to-forget option if you’re in the market for a sizeable SUV that won’t break your budget. It may not have all the latest mod-cons on offer, but it has the ones that matter. Our recommendation is that it’s a great car if you are looking for something cheap – starting $29,990. But if you’re looking at an SUV with the latest safety features and technologies, the top model Intens doesn’t persuade as much as the competition.

The new CR-V, for example, flies ahead when it comes to interior space and functionality. And the equivalent-priced Mazda CX-5 walks well in front of the Koleos in terms of driving dynamics and premium feel. Extensive warranty and after-sales care is the Koleos’s best trait, while the new diesel is definitely the pick if you’re tossing up between the 2.5 petrol Intens and the diesel. It produces more power and torque, and it’s more fuel efficient. We also think the diesel suits the nature of its premium/Euro aspirations better than the petrol.

CONS:
– Multimedia menus are awful
– Hill descent gearing is too sensitive at times; the slightest decline can cause it to rev up
– Layout and naming of interior buttons is not user-friendly
– Air-con doesn’t have an always-on display menu
– El cheapo Nexus tyres
– Annoying key card; no keyring