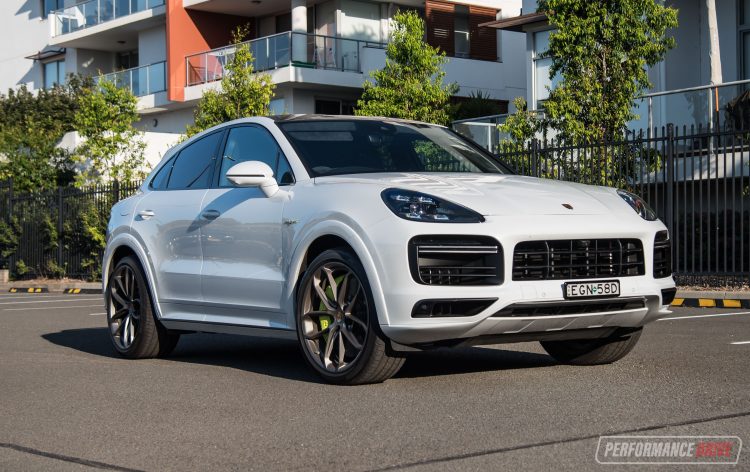 In essence, this is the Cayenne Turbo but with a 100kW electric motor providing an instant boost in power and torque. Not that the 404kW/770Nm 4.0-litre twin-turbo V8 needs it. Porsche isn’t just applying more power for the sake of it though. Like many carmakers, Porsche is planning to expand its portfolio of electrified vehicles in the future, and models like this are a stepping stone. In fact, the next-gen Macan will be a fully electric model only.

This is all in the name of reducing overall emissions and fuel consumption across the fleet. The Turbo S E-Hybrid is a plug-in hybrid vehicle (PHEV), which means you could, under specific circumstances and demands, drive it as a pure electric vehicle and not actually add fuel to it. But we’ll get to more on that later.

Being the top-rung model, let alone with the additional electro technology, this is quite an expensive one. Prices for the regular Cayenne Turbo S E-Hybrid start from $288,000, while this MY2020 Coupe version kicks off from $292,700. We’ve noticed prices have climbed slightly for the MY21 update, to $292,200 and $297,900, respectively (all excluding on-road costs). 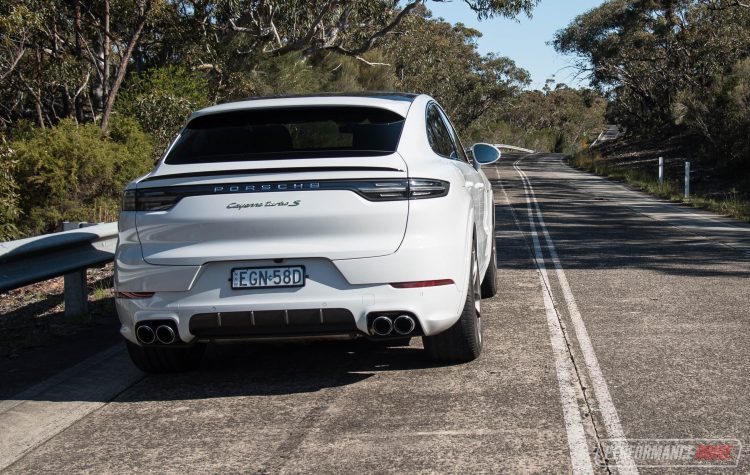 At first we thought it was strange that the Coupe version is around $5k more expensive. After all, the regular wagon variant offers more ‘car’ for your money, physically. However, you should consider the Coupe as the more decadent choice as it does come with additional luxuries and extra-indulgent features. Some of such items include, over the regular wagon, a standard electric sunroof, 22-inch rear wheels (compared with 21s), and adaptive-ratio power steering.

The interior is presented like a business-class suite, with hints of Porsche DNA in some areas. The dash is traditionally flat and upright, and pushed forward for a clear and uncluttered view, while the centre console is raised to provide an semi-enclosed and cosy cockpit. Look at the stunning flush controls on the console. These light up when you start the engine. And it isn’t just an embedded touch-screen. Each control provides haptic feedback (a slight vibration/click) with each selection. 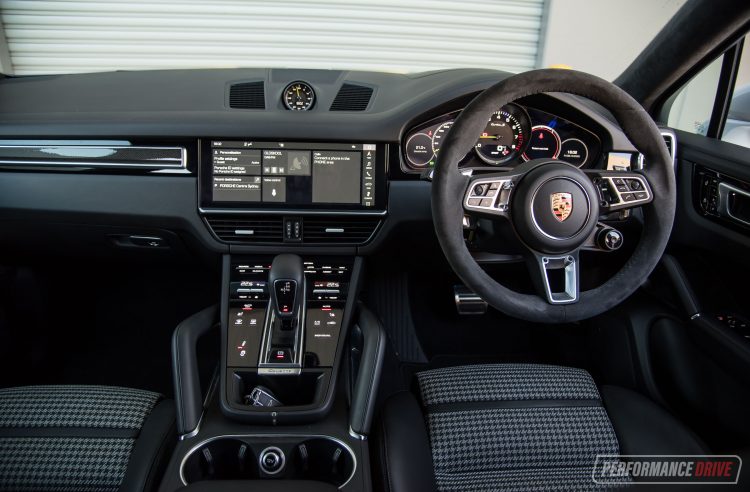 Another element that’s got Porsche written all over it (not literally) is the placement of the steering column and its perfect alignment with your chest. The wheel just falls exactly at your hands. This test car shows off the Light Sport Package too ($20,270), which includes a heated wheel wrapped in lush Alcantara. 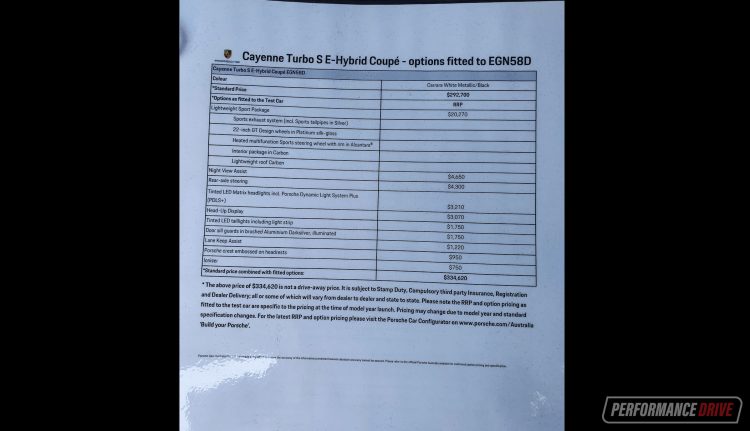 Porsche is sticking with its giant, centrally-mounted rev counter for the gauge cluster, and keeping it a mechanical dial, which garners a lot of respect from us. It’s great that cars are being filled with digital technology but sometimes the old-fashioned things, made with proper attention to detail and physical moving parts, are better. For example, a classic analogue wrist watch trumps a digital smart watch in our opinion. 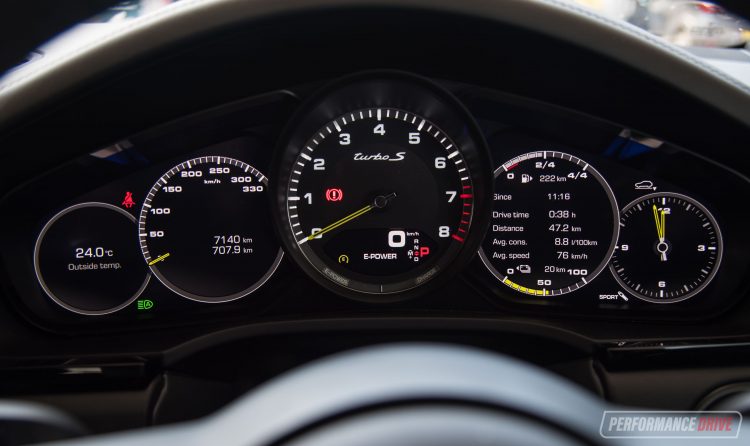 But for those that welcome a digitised world with open arms, the gauge cluster here does feature two crisp screens on either side of the rev counter. These provide all of the usual driving and trip info, and the right screen can even show the sat-nav map. There’s also a configurable screen that allows you to display things like real-time g-force, turbo boost pressure (we saw it peak at 20psi), and oil and temp status, and optional night vision ($4650).

Don’t you just love the tartan-style trim on these seats? When we first picked up this vehicle and saw the seats our knees almost buckled over their sheer desirability – we need these in our lives. In typical Porsche fashion the front seats don’t look especially appetising. They actually look quite basic. But once you sit down and smudge yourself in you’ll feel they actually provide a lot more lateral support than they seem. However, we’re not sure they’d convince larger-framed passengers. 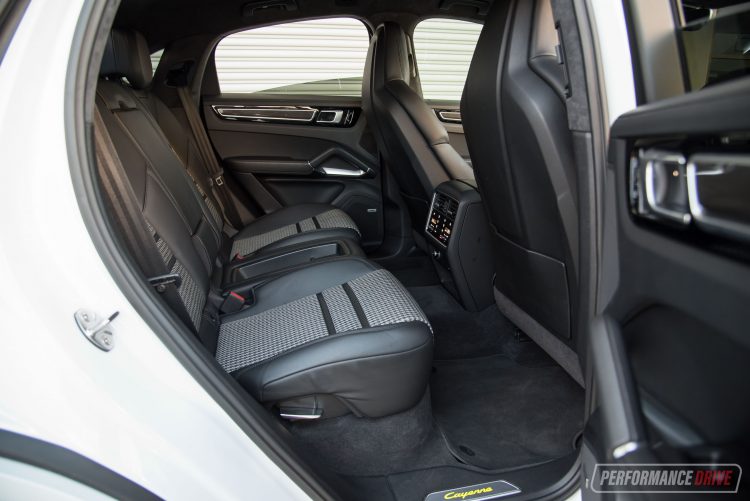 Obviously the Cayenne Coupe does sacrifice some rear seat space due to its curvy roofline. Legroom is no issue. There’s heaps of it. But yes, headroom is reduced a fraction. We feel like it’s mainly a detriment when getting in and out, as you have to dodge the roof and pillar more so than in the regular Cayenne wagon. This example has the standard four-seat layout, with two separate rear seats and a small centre console. Buyers can go for the no-cost optional 2+1 rear seat setup though if five seats is a must.

Boot space is also reduced over the wagon, with 500L opening up to 1440L here. If you want more the wagon presents 645L/1605L. Both body styles also offer a 3000kg braked towing capacity. 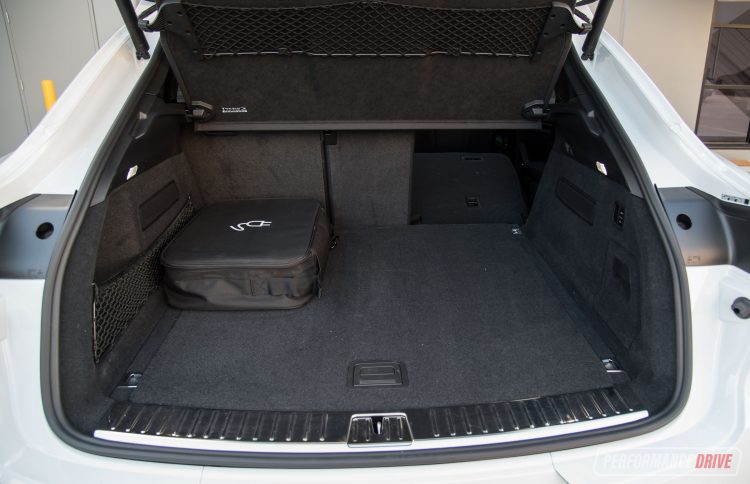 Imagine the engineers at Porsche, thinking (with a German accent), ‘how can ve apply eco-friendly hybrid technology to our vehicles, but still have ze performance and fun?’ Okay, our German accent is terrible. But you can just imagine engineers coming up with the idea of adding a 100kW electric motor to a twin-turbo V8. And then, perhaps to their surprise, it being approved by the higher-ups. It’s an insane package.

Driving this beast is just like the Cayenne Turbo. Except, there is no turbo-lag. None. Not even a sip. If you’re in a gear or in manual mode and you’ve selected a gear, the car will accelerate as quickly as the rotation speed of your right ankle. On a private road with a Vbox Sport we clocked 0-100km/h in 3.69 seconds, bettering Porsche’s claim of 3.8, with 0-200km/h coming up in just 12.40 seconds, shattering Porsche’s claim of 13.2 seconds (13.3 without the Light Sport Pack). 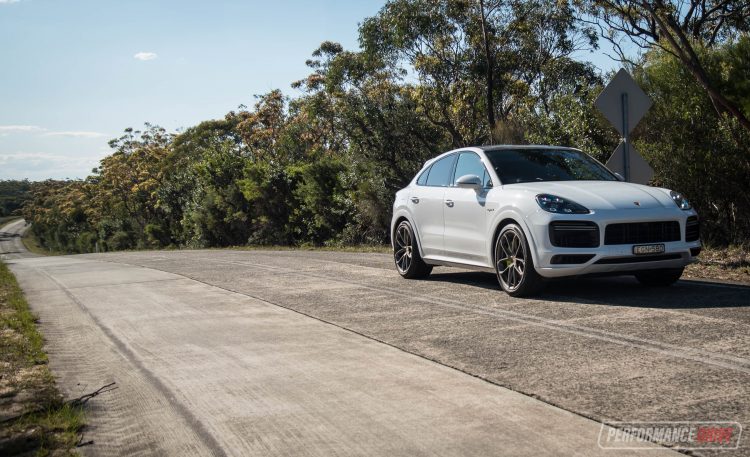 It is frighteningly fast. When you put your boot in it just takes off, even if you leave it in auto mode. The eight-speed Tiptronic (torque convertor) transmission downshifts immediately, kicking you back like you’ve just been sucked out of a flying aeroplane. What we’re trying to get at is, despite being a plug-in hybrid and featuring fluoro green brake calipers, this is definitely an extremely rapid performance SUV. Totally deserving of the top spot in Porsche’s SUV food chain.

The acceleration is particularly ferocious going up through the gears. Off the line there is a split second moment, as there is in all cars, where the transmission engages and other parts make their connection. With that electric motor filling in any gaps though, it’s almost like the revs hardly drop at all during upshifts. It’s already there and ready for the next gear. Check out our acceleration video below to see what we mean. 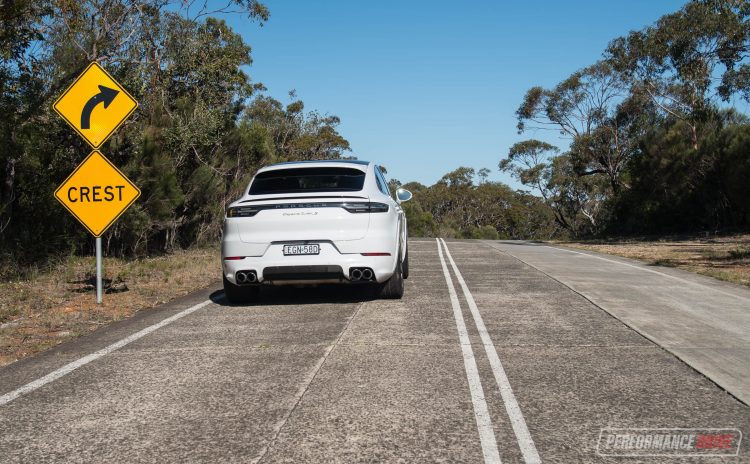 How does it do around corners? Well, this particular variant has a tare weight of 2488kg. That’s heavy, and not really Porsche-like at all. Even so (you knew we were going to say that), the handling is wonderful. This model comes standard with fully adjustable and adaptive air suspension. All of the gear required for this no doubt contributes to the weight but it does do an excellent job of ironing out bumps, while also providing strong resistance to body roll.

Helping in this department is rear-axle steering, which is a $4300 option. It’s really hard to explain the sensation of rear-wheel steering but basically it feels like the car is gliding as it turns its way along a nice bendy road. Elegantly transitioning from corner to corner. This model is already capable of pulling 0.8g of lateral force around corners, Porsche says, but with the rear steering the big SUV is even more stable at speed, and more agile at low speeds. 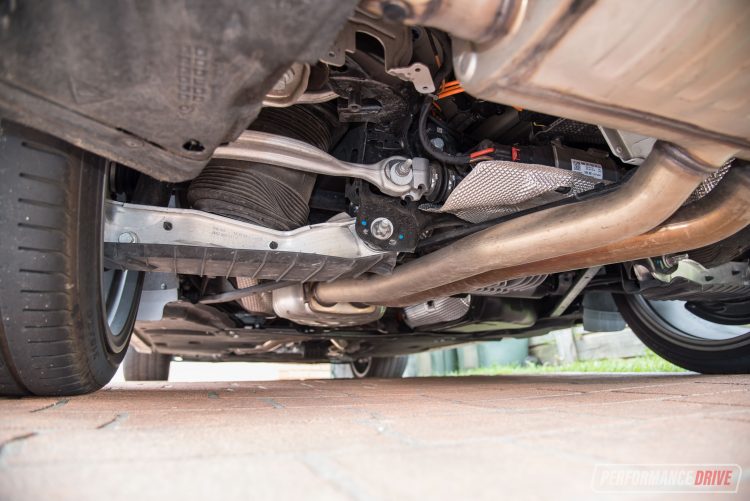 More specifically, below 80km/h the rear wheels pivot in the opposite direction to the front. This effectively reduces the car’s wheelbase, making it feel more pokey and direct. Above that speed the rear wheels pivot in the same direction to the front. Not only does it change lanes like a crab, it increases the stability around big sweeping corners. In more practical scenarios, the system helps to reduce the turning circle from 12.1m to 11.5m. We would option for it if it were our purchase.

So what about all of that eco stuff? To be honest, we don’t think you should be interested in this model purely because of the PHEV technology and its supposed economy benefits. The full-charge range is 40km, and it does seem to be pretty accurate on that in the real world. More accurate than some other PHEVs we’ve driven. However, 40km isn’t much. And it’s almost impossible to resist the temptation to purposely cause that V8 to fire up and bellow out its song. 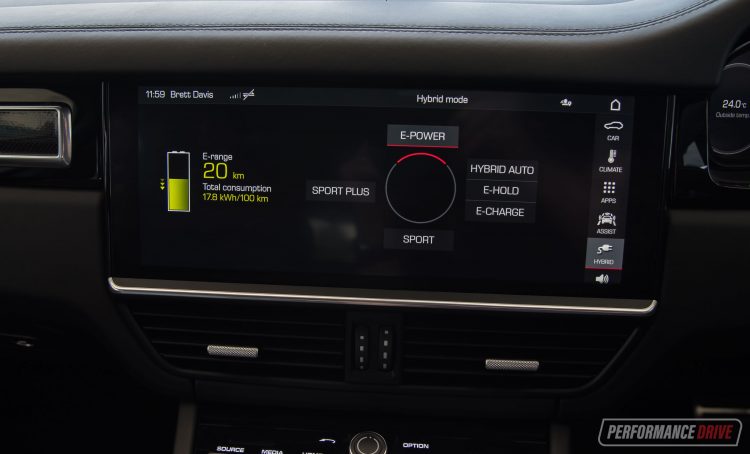 Interestingly, though, you can actually fully recharge the battery by activating the ‘E-Charge’ driving mode, using the V8 as a generator. It takes a while, but it can be done. You can also hit E-Hold model and it will try its best to hold the current state of charge. We’re not sure when this would ever come in handy. If you’re running out of fuel and can’t afford to top it up then you’re probably in the wrong car category altogether.

What we’re saying is, if you like the regular Cayenne Turbo, you should check this out. This is even more ballistic. If you like the standard E-Hybrid, then you’re probably better off sticking with that. The official average consumption on this is 4.4L/100km, and we averaged about 11L/100km. But that’s mainly because we thought the V8 was too good to leave switched off. 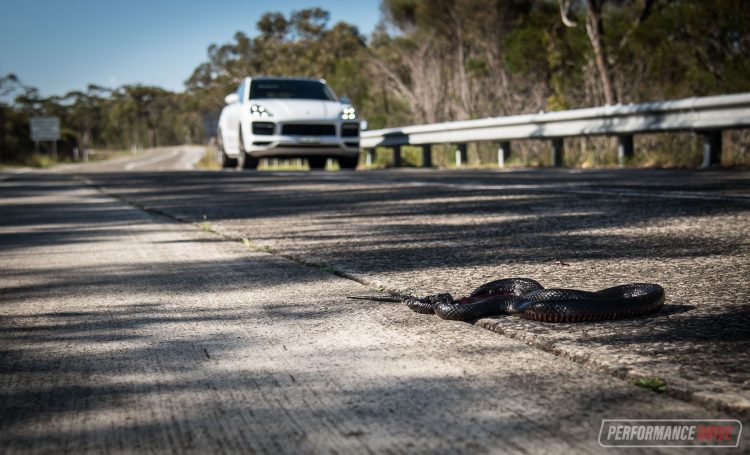 The hybrid tech is beneficial but we enjoy its performance benefits more than the eco bonus it provides. During some highway driving we saw the trip computer drop down to around 8.8L/100km. There is definitely some potential there to achieve very low numbers, and that’s very impressive for a 500kW V8 SUV.

For comparison the standard Turbo has an official average consumption of 12.3L/100km, and we predict a real-world result of about 14-15L under similar conditions applied to this test vehicle. Combined emissions are 100g/km for this, and 280g/km for the Turbo. So there is some guilt-free pleasure here.

Yep, it’s definitely one of the fastest SUVs we’ve ever driven. The way the speed climbs so relentlessly just blows your mind, especially for a 2.5-tonne vehicle. The adaptive air suspension does a fine job of hiding the weight, too. And we love the interior, especially with these tartan seats.

What we love most about the Turbo S E-Hybrid though is that it produces a filthy, snarling V8 soundtrack, with performance of epic proportions to back it up, yet you can park in the electric vehicle spots at the shopping centre. The looks you get from EV and PHEV enthusiasts is just priceless. Just make sure you pull in with the sport exhaust activated. That, alone, is enough of an excuse to sign over $300k in our view. 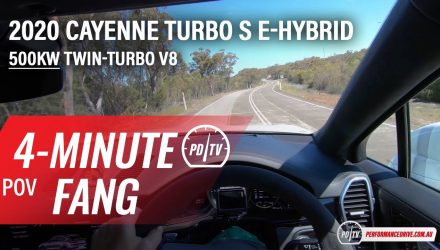