The new 2013 Volkswagen Golf R Cabriolet has been revealed in the company’s latest video release. This will be the most powerful drop-top Golf to ever enter showrooms, featuring the same running gear as the high performance Golf R hatch. 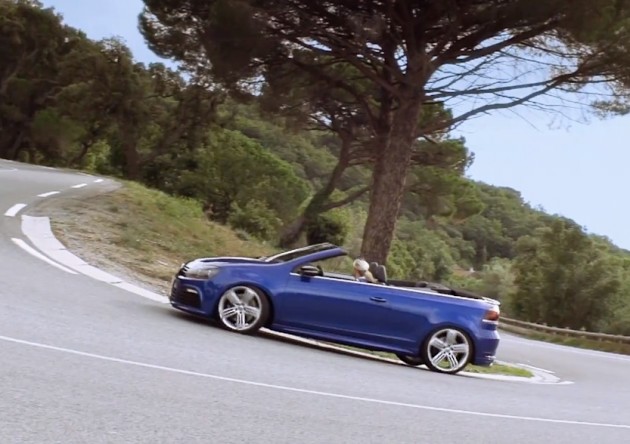 Like the normal Golf R hatch, the Cabriolet version is set to be powered by a 2.0-litre TFSI turbocharged four-cylinder engine. In the hatch it produces 199kW and 350Nm (in overseas markets), and 188kW and 330Nm in Australia. Being the only all-wheel drive Golf, the R is able to scoot off the line and cover 0-100km/h in 5.9 seconds.

As you can see in the video, the R Cabriolet features pretty much the same sort of bodykit and aggressive styling theme as the hatch. There’s a sporty front bumper bar with large intake vents, some side skirts, and a neatly finished off rear bumper bar and lower diffuser section. A set of R-exclusive 19-inch alloy wheels top it off.

Despite Australia’s excellent summer conditions, the Volkswagen Golf R Cabriolet isn’t part of the local arm’s future plans at this stage. It will hit international markets later in 2013 though. Click play below for a glimpse.