The all-new Jaguar F-Type is almost here, with its unveiling set for next month at the 2012 Paris Motor Show. In the meantime, a video has just surfaced showing a prototype model undergoing some test laps at the Nurburgring. 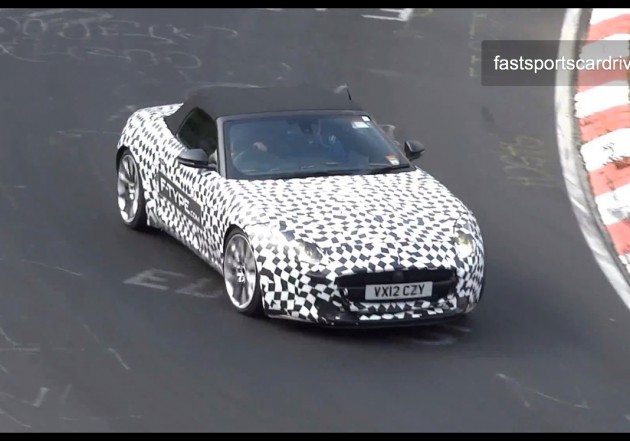 The Jaguar F-Type will be the company’s new sports car, squarely targeted at rivals such as the Porsche 911. It is expected to sit beneath the current XK, in terms of price, while a new supercharged petrol V6 will provide the thrills.

Jaguar announced the new 3.0-litre supercharged V6 earlier this year, with a power output of 280kW. The engine will be available in the updated XJ and XF models from November, albeit at a slightly detuned level with 250kW.

As previously reported, the F-Type is set to come with a six-speed manual option, as well as an eight-speed automatic. It will also be rear-wheel drive, like a proper sports car. In other words, this will be one to look forward to.

As you can hear in the video below, the white V6 prototype (with centrally mounted exhausts) produces a proper growling six-cylinder bark. It sounds a bit like an old Jaguar E-Type under full power.

Of course, the sound the eventual production car makes might be a little different from this prototype. Click play below to take a listen.

All will be revealed at the 2012 Paris Motor Show, starting September 29. The new model will also be on show at the 2012 Australian International Motor Show in Sydney in October.