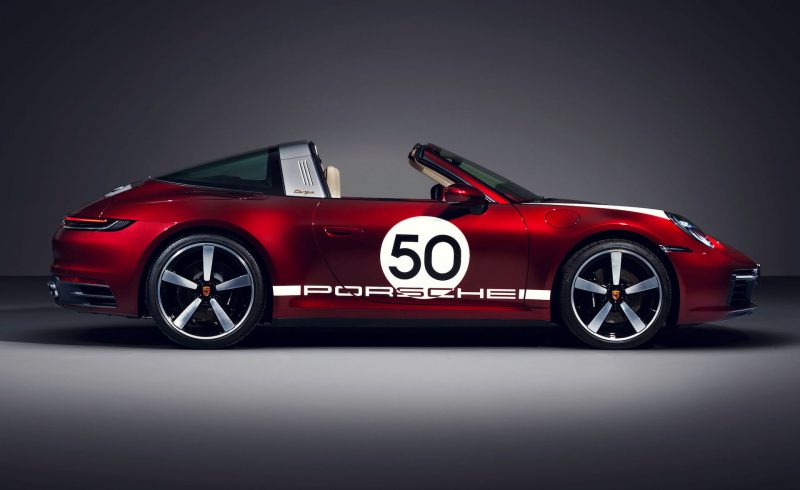 A new special edition has been announced by Porsche, called the 911 Targa 4S Heritage Design Edition. It, as the name suggests, was created to commemorate traditional elements from classic sports cars. Specifically, 1950s and 1960s Porsche 356 and 911 models. Based on the recently-revealed 992 911 Targa, the bodywork is coated in a unique Cherry Metallic and is paired with gold logos to create a 1950s theme, Porsche says. There’s also a white livery decorating the sports car with historical patterns inspired by the early days of Porsche motorsport.

At the back is a Porsche Heritage badge which is inspired by the badge given to a Porsche 356 when it reached 100,000km. Meanwhile the front adorns a Porsche crest inspired by the 1963 crest. This logo is also featured on the headrests inside and on the special key pouch. Finishing off the exterior is a set of 20-inch front and 21-inch rear alloy wheels, in the Carrera Exclusive Design with classic black brake calipers hiding behind. Oliver Blume, chairman of the executive board at Porsche, spoke about the special edition in a statement, saying:

“With the Heritage Design models, we are evoking memories of the 50s, 60s, 70s and 80s in customers and fans alike. No brand can translate these elements into the modern day as well as Porsche. In this way, we are fulfilling the wishes of our customers. We are also establishing a new product line that represents the lifestyle dimension in our product strategy with these exclusive special editions.”

Take a look inside and you’ll see the bespoke work continues through. Passengers are greeted with a two-tone leather upholstery made up of Bordeaux Red and OLEA Club leather in Atacama Beige (black and beige is also available). If none of this seems traditional enough, how about corduroy trimmings for the seats and door trims? This material was used on the 356 of the 1950s. Lastly, the rev counter showcases classic green backlighting, while the roof lining comprises of perforated microfibre and leather. A special build number plaque sits proudly on the dash, highlighting its 1-of-992 status.

No changes are made to the hardware and powertrain. In the back is Porsche’s latest 3.0-litre twin-turbo flat-six engine which produces 331kW. It’s connected up to an eight-speed dual-clutch auto with all-wheel drive, capable of propelling the classically-themed machine from 0-100km/h in 3.6 seconds.

The 2020 Porsche 911 Targa 4S Heritage Design Edition is available to order in Australia now, with local deliveries set to commence from the fourth quarter of this year. Prices start from $395,300 (excluding on-road costs). Deliveries of the regular new Targa are scheduled to commence during the third quarter.