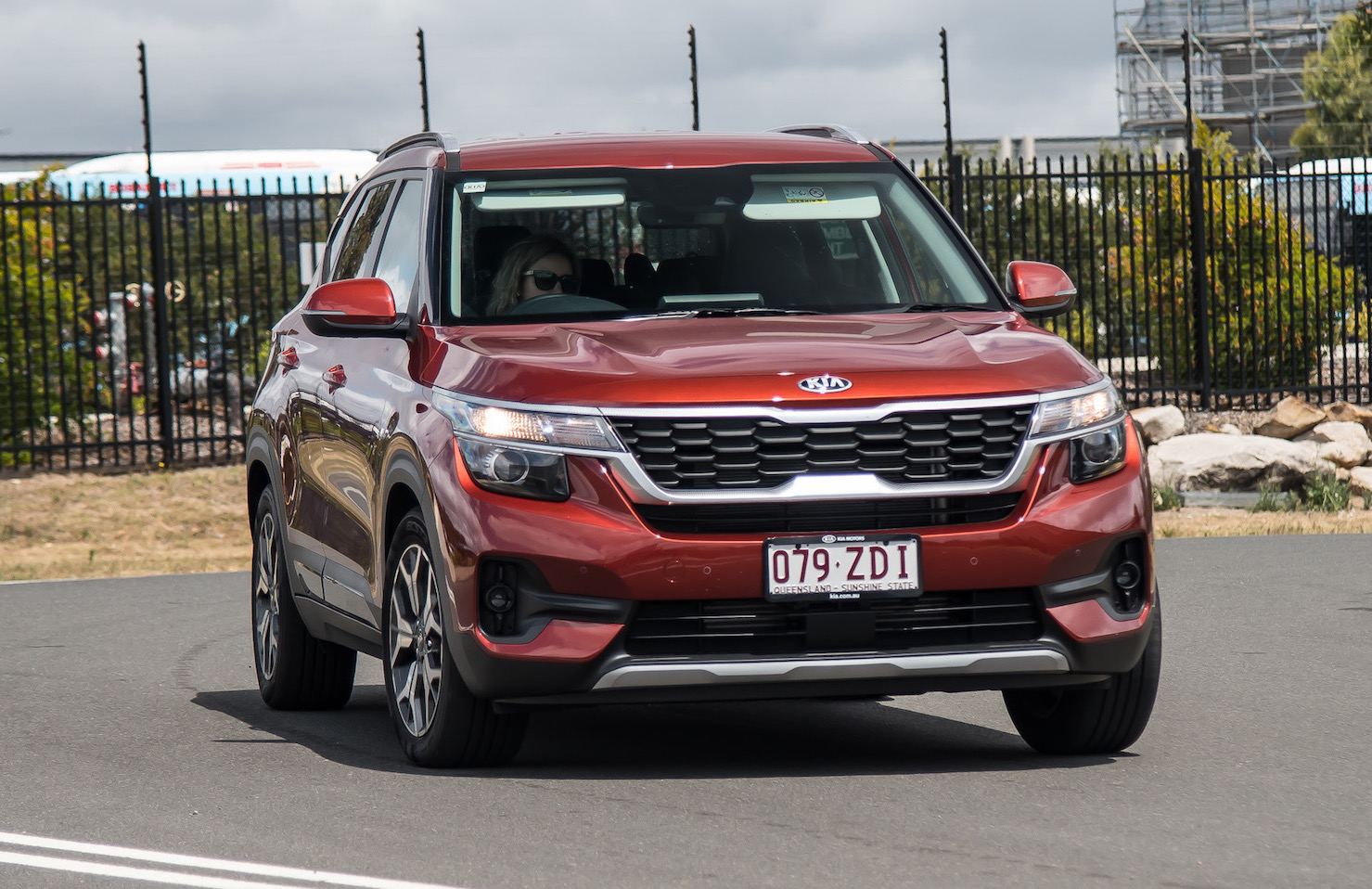 Without meaning to give away the conclusion before the review has even started, Kia seems to have struck yet another winning chord with the new 2020 Kia Seltos. On paper/screen the initial specs and features seem very appealing. Let’s have a look. 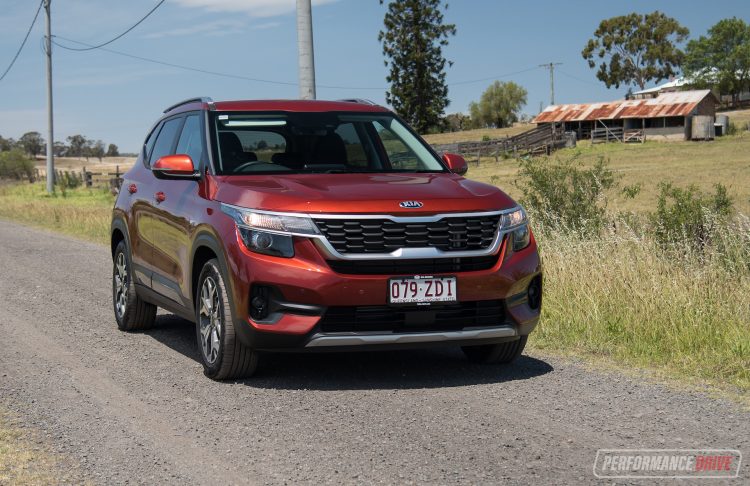 It’s being pitched into one of the fastest-growing segments in the industry. Why has it taken so long for Kia to jump into this class? We’re not sure, especially since its parent company Hyundai has been offering the platform-sharing Kona for well over a year now. In fact, Hyundai has had time to launch two small SUVs, recently adding the Venue to its showroom.

Kia Australia offers four main trim levels of the Seltos, spanning from the S, Sport, Sport+, to the top GT-Line. The first three come with a 110kW/180Nm 2.0-litre petrol which is paired to a CVT auto and front-wheel drive, while the GT-Line comes with a 130kW/265Nm 1.6-litre turbo-petrol four-cylinder paired with a seven-speed dual-clutch auto with all-wheel drive. The Sport+ is available in this configuration as an option, which is what we’re testing here.

At these prices it isn’t exactly the cheapest small SUV out there, but nor is it the most expensive for the non-premium class. For comparison, prices for the Kona range between $24,000-$39,500 (excluding the electric version). 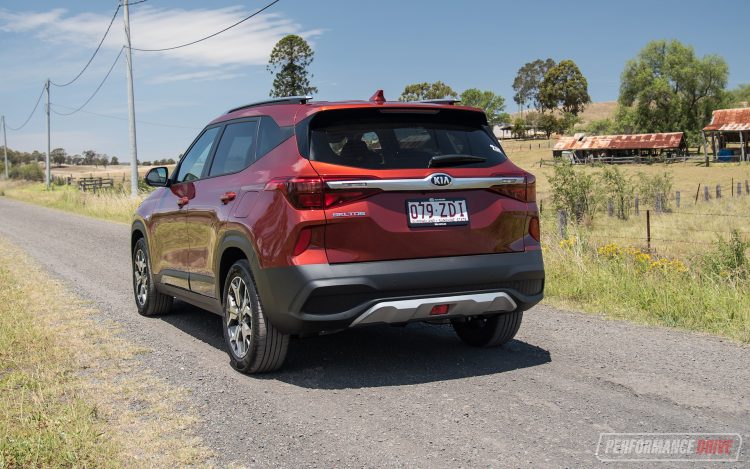 Before we jump inside, we just want to explain a bit more about the size. Measuring 4370mm long, 1800mm wide, and 1615mm tall, it is only 115mm shorter in length, 55mm narrower, and 40mm lower in roof height than its bigger brother, the Sportage. For further comparison, it is 205mm longer and 50mm taller than the Kona, sharing the same 1800mm width. The wheelbase is stretched 30mm. So as you can see this is sized more towards a mid-size SUV than the smaller category.

And it feels it when you open the door and get inside. The sense of spaciousness is super impressive; there aren’t many SUVs in this class with more headroom. This is partly because the Seltos takes a more traditional upright cabin orientation as opposed to the perhaps more fashionable lower-profile, coupe-like theme. We like it. It doesn’t feel cramped at all, and there are loads of storage options around, including a decent-size centre box, cup holders, a spot for your phone, and big pockets in the doors with sections for bottles. 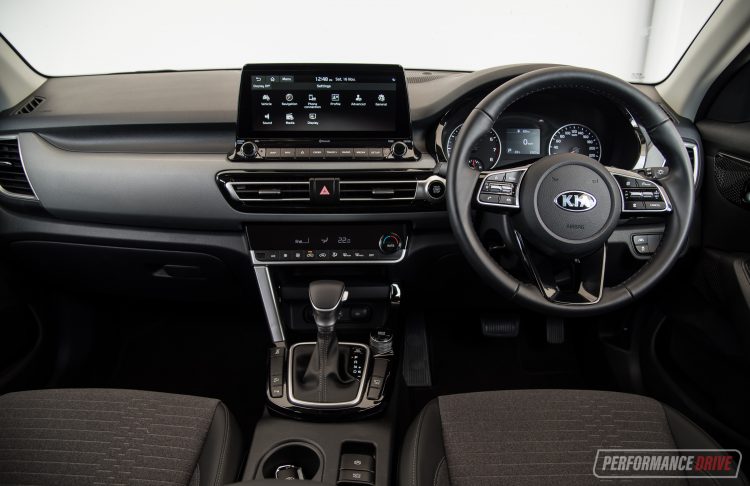 Going for the Sport+ gets you a heap of standard goodies. One of the most impressive of such is the new 10.25-inch touch-screen media interface (base S gets 8.0-inch screen). The graphics are very crisp and the menu layout is a cinch. It offers Android Auto and Apple CarPlay connectivity as well so you can easily mirror some of your phone’s apps right up onto the screen. It also features digital radio and in-built sat-nav with SUNA live traffic updates.

Down below this is a nifty little climate control panel. Single-zone control, but what we love is the three-stage ‘auto’ function. As anyone who has selected ‘auto’ in any modern car will know, the climate system usually has frenzy and goes into overdrive and blasts the fan to oblivion. With three-stage control you can calm the system down so it more gradually cools or warms the cabin. The panel itself is also elegantly designed, with a digital display leaving a flush black fascia when the car is turned off. 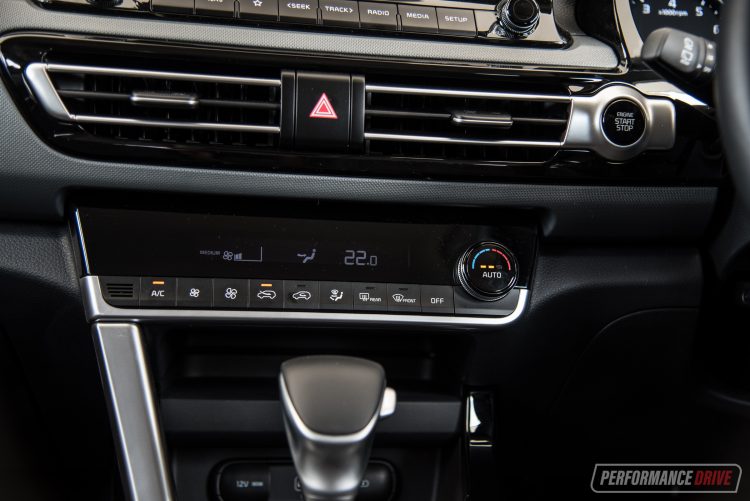 Moving up to the GT-Line adds some bonus luxuries like an eight-speaker Bose sound system and a wireless phone charging pad, as well as leather trimming and heated/cooled front seats. But to be honest, unless you really need those items, the Sport+ is perfectly adequate for this type of vehicle. The multi-material upholstery in dark grey and textured fabric looks modern, and the semi-sporty front seats provide both good comfort and support.

Jumping in the back is also where you’ll benefit from those big external dimensions. Rear legroom is fantastic for this class, and due to the high ceiling the headroom is also at the top of the class. It’s a shame that only the GT-Line gets rear climate vents, and there’s no USB charging points back here. In saying that, the Sport+ does come with two USB ports in the front and a 12V socket, which could be regarded as enough for a small SUV. But we tend to disagree a bit because this is so big, it could be used as a family car and thus buyers might require the full amenities typical of a larger vehicle. 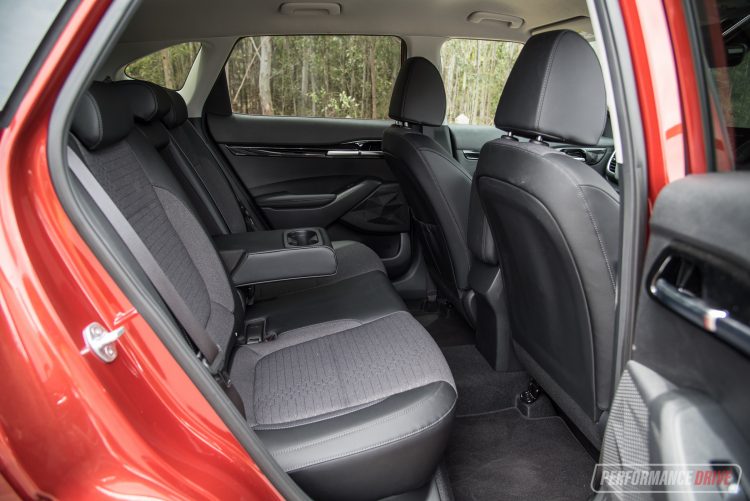 Things just keep getting better the more you looking into the Seltos. Open the tailgate with the standard keyless entry system and you’ll be blown away by the amount of space. The specs say 433 litres of volume is available, expanding to 1393L with the rear seats folded. And they fold pretty much completely flat. This is one of the biggest boots in the class, despite a full-size spare sitting under the floor.

Overall, we think this is one of the best interiors of this class. It fulfils fit-for-purpose brilliantly, and there are some cool design cues blended in, with excellent user-friendliness, and a great solid feel. Even the buttons and knobs feel good. The LED interior lighting (on Sport+ and GT-Line) at nighttime is particularly elegant as well, and puts some premium SUVs to shame. Great job, Kia. 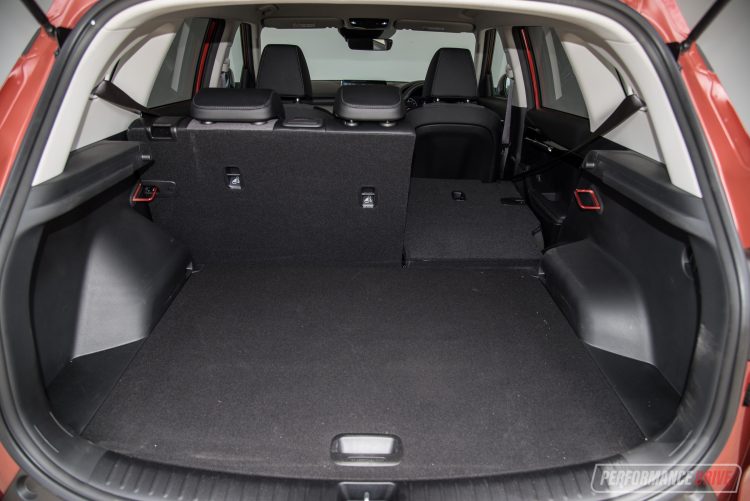 In terms of safety, all models (at minimum) come with lane keeping assist, a rear-view camera with parking guidelines, and autonomous emergency braking with car and pedestrian detection. The Sport+ and GT-Line add rear cross-traffic alert, blind-spot detection, and cyclist avoidance technology. ANCAP has given a rating of five stars for all variants.

Is it worth going for the 1.6-litre turbo option with AWD over the 2.0L with FWD? Well, we’re not sure. It depends what you need and how enthusiastic your driving is. We would go for the turbo but that’s because we’re rev-heads. It goes very well. During testing we clocked a best 0-100km/h in 7.74 seconds, which is fractionally behind our 7.54-second time we achieved in the Kona 1.6T AWD last year. Interestingly, this is the fastest Kia SUV we’ve ever tested, and that includes the V6 Sorento.

Aside from the speed, the turbo does bring some practicality benefits as well. For example, peak torque (265Nm) is available from just 1500rpm and held until 4500rpm. The naturally aspirated engine option hits only 180Nm at 4500rpm, precisely. The fact that the turbo unit offers stronger torque alone is worthy of consideration, but it’s the day-to-day driving where the wide torque spread actually comes in handy. It helps to provide an effortless driving character. Again though, if you don’t care about this sort of stuff, the 2.0L will probably do just fine. 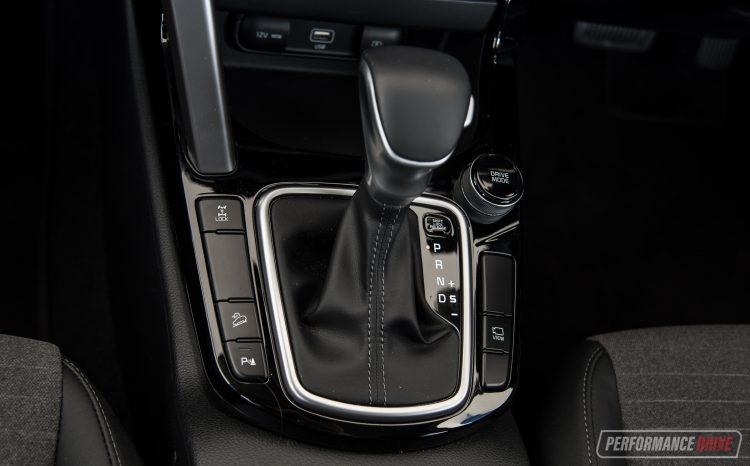 In the default driving mode the transmission doesn’t upshift too early, but even if it doesn’t kick down quite when you expect, the engine torque surges and pulls through whatever in any case. Top end power is strong as well, with all 130kW reached at 6000rpm. So, literally, the more you rev it the faster it goes. That’s typical of a non-turbo engine. For us though it is the effortless nature that impresses most and will probably appeal more to you as well.

An element that can let the powertrain option down a little in our opinion is the dual-clutch auto. These types of transmissions are absolutely amazing in sports cars, where you might be calling for strong performance for more of the time you’re behind the wheel. But in a practical small SUV, we’re just not sure it’s need.

Don’t get us wrong, the upshifts are extremely fast and you can prompt for equally fast downshifts. But as a trade-off, which is mostly inevitable with dual-clutch autos, you have to put up with some clunkiness around town and in slow, stop-start traffic conditions. There’s also a delay going between forward and reverse, and vice-versa. We think a normal six-, seven-, or eight-speed auto would be much nicer and more consistence with the rest of the vehicle in this case. 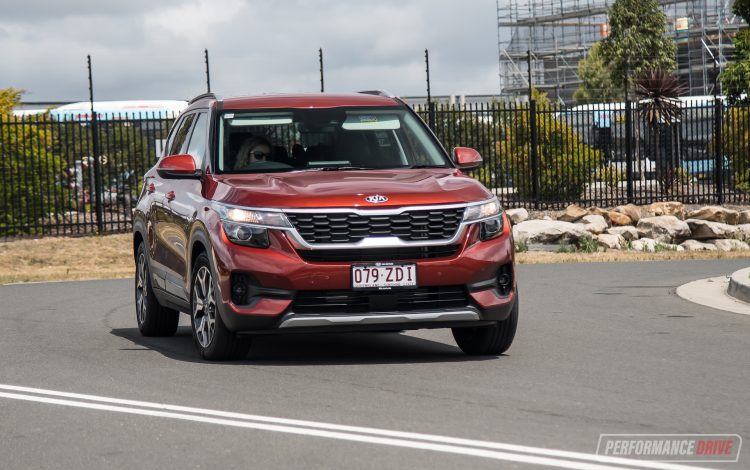 That’s enough about the powertrain, though. The rest of the driving behaviour is pretty much perfect. We love the handling. It feels stable and confident enough but also playful and fun, and there is plenty of suspension travel to absorb nasty potholes and bumps. As usual, the ride and handling was fine-tuned in Australia for the Australian-spec vehicles (produced in South Korea). And as usual, the local teams have struck a great balance between comfort and absorption, as well as tautness and a sporty character.

A similar thing could be said about the steering. It’s a lovely three-spoke wheel, too. You could happily go for a mountain drive in this and feel a decent degree of enjoyment of simply going for a drive. Of course, push it really hard and there are some weak links. But that’s pushing the vehicle into a territory in which it wasn’t designed for.

We pushed on anyway for investigative purposes and found understeer to be the first alarm bell. In these scenarios we found (as usual with modern cars) it does become more composed if you apply some power, which might seem counter-intuitive. We put this down to the on-demand-type all-wheel drive system, and the way it kicks in to provide additional balance. Compared with the segment rivals when pushed in these conditions, the Seltos’s behaviour and capability is at least at or slightly above the average, although not quite as sharp as the Mazda CX-3 and not quite as overall dynamic as the Toyota C-HR. 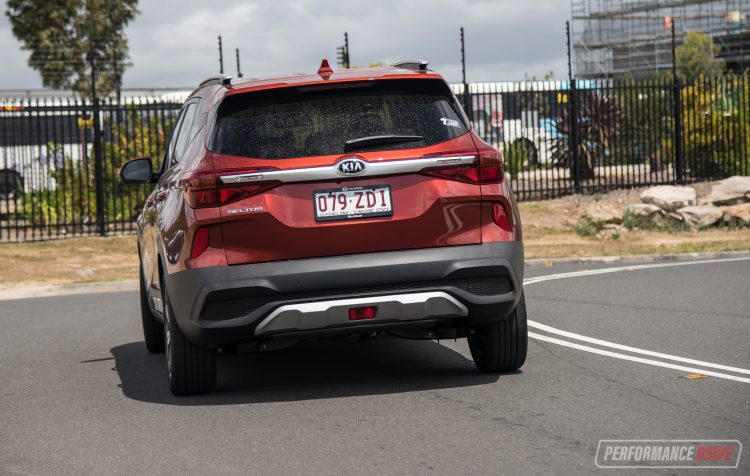 This is a lesson in how to make a small, practical SUV. It boasts class-frightening practicality and interior space, excellent in-car technology, the important advanced safety systems, and a peppy turbo engine. There isn’t much not to like. If you’re in the market for a small car or small SUV, or even a medium car/SUV, we highly recommend you take a close look at the new Seltos.

CONS:
– Doesn’t need dual-clutch auto, could be smoother without it
– Electric tailgate not available (on any variant)
– Expensive compared with some rivals