These are two of the most extraordinary Lexus vehicles ever created, and they’ve met on a track for the first time for your enjoyment. You have the Lexus LFA, the company’s first and only supercar it has ever made, and the simply stunning LF-LC concept. 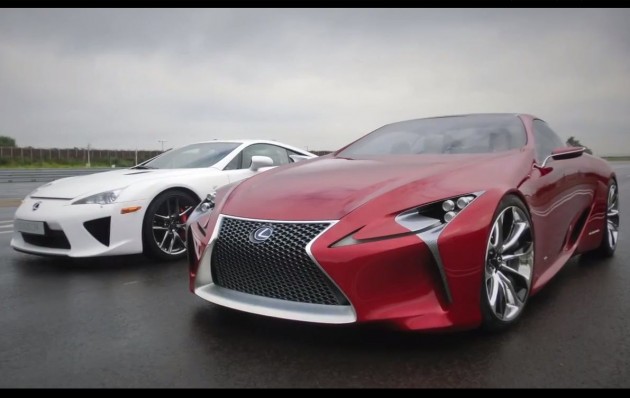 The chances of ever seeing these two together again is very slim. With just 11 LFAs sold in Australia and 500 made in total, it’s a very rare car in its own right. The LF-LC on the other hand, well, it’s a one-off concept car for now. A production version is likely to be on its way though.

Lexus has previously hinted that production is “almost a certainly” for the LF-LC. It’s understood it will be toned down somewhat from the concept, but it is set to be strongly influenced by it.

According to reports, it will be like a toned down version of the LFA. Toned down as in not as highly strung in terms of engine performance, price, and production numbers. It’s also expected to be like a successor to the old SC 430 grand coupe.

As far as market availability goes, you do have some time to save; it’s not expected until some time in 2016.

While you’re waiting, click play on the video below to take a look at these two fabulous machines side by side. You can clearly see the design language relationship between the two.