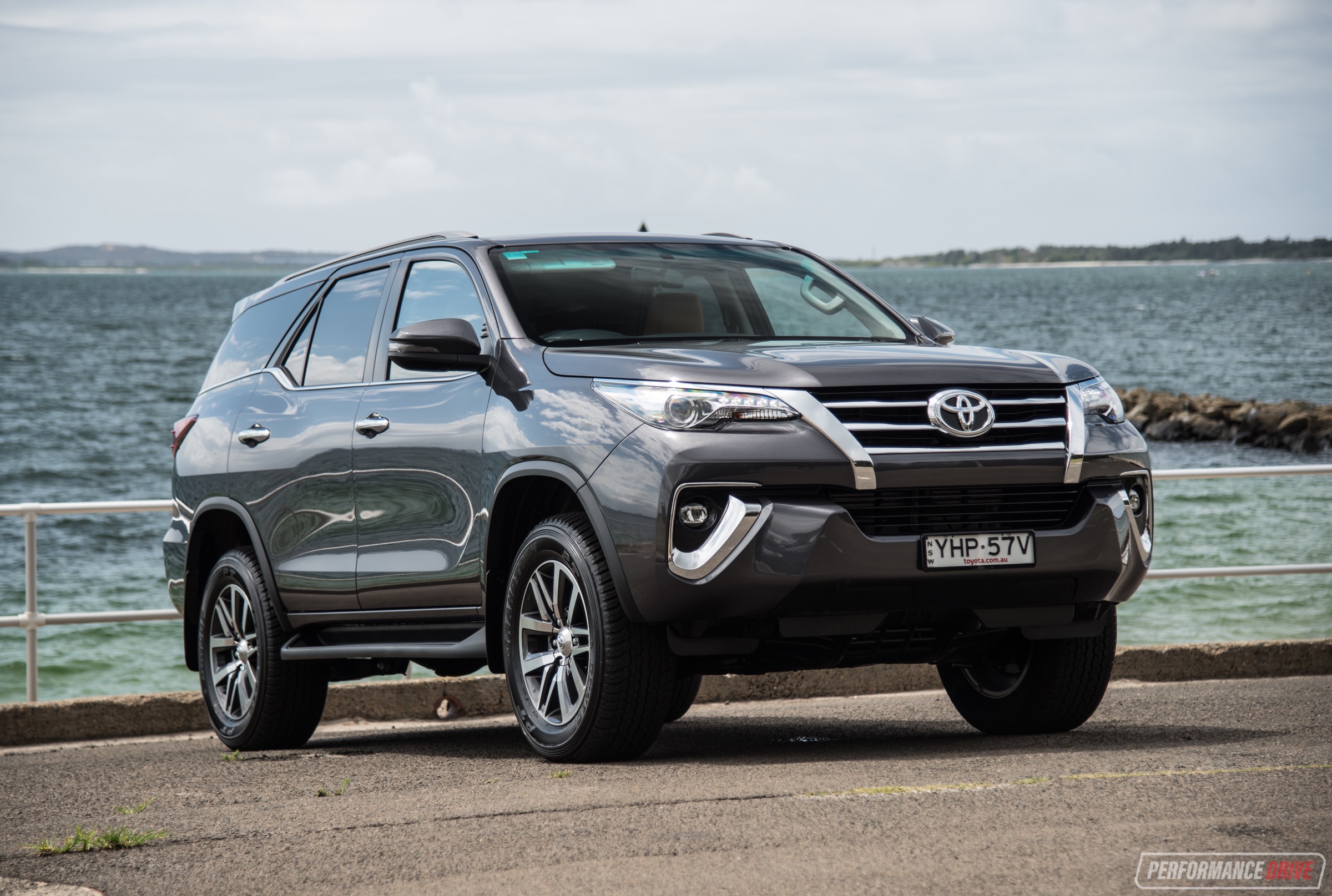 Toyota’s supremacy in the ever-increasing SUV market continues to prosper. With no less than six SUV models on offer, it’s obvious what type of vehicle customers are moving towards in droves. With so many models, it can be confusing to know where the Toyota Fortuner sits. 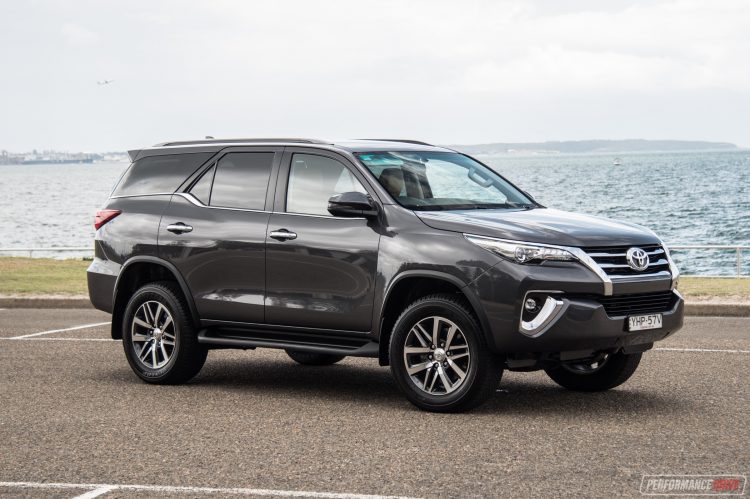 To give you an idea, the Fortuner is based on the same platform as the HiLux ute. Which indicates that it is designed more for drivers that are truly intending to take their vehicles off-road. It contains all the underpinnings purpose-built for hard yakka. It’s bigger than a RAV4, featuring seven seats, and more off-road-ready than the Kluger. Sounds like a spot for the Prado? The Fortuner is slightly smaller and more affordable, but yes, it does compete in the same specific SUV class.

The local Fortuner lineup is straightforward. It kicks off with the GX, GXL and to the top Crusade – the latter being tested here (GX review here). All variants come standard with 4×4, and are available with a manual gearbox if you don’t want the six-speed auto option. 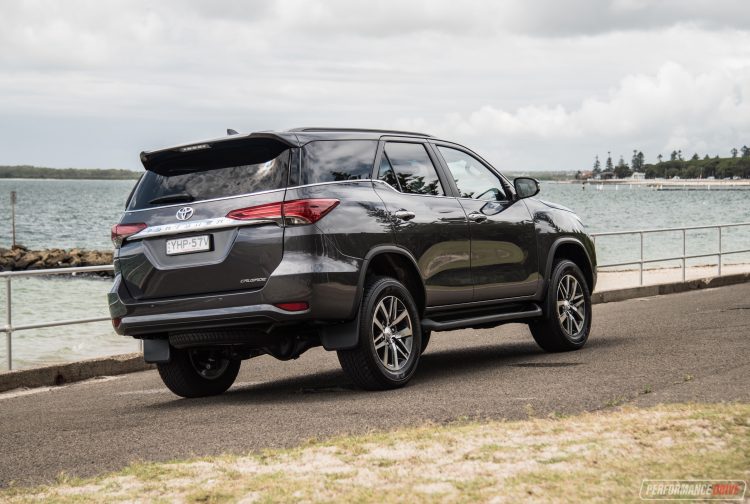 Toyota is notoriously skimpy when it comes to feature offerings, but the Fortuner Crusade is the top-spec model for those who demand a stroke of luxury and technology with their rugged off roader. You get all the basic gear, including a premium 11-speaker sound system with digital radio, Bluetooth, proximity keyless start, leather seats, power tailgate, gear shift paddles, third row seating and rear air-conditioning with dedicated controls.

Unfortunately, it misses some of the modern safety stuff, like radar cruise control, blind-spot indicators and autonomous emergency braking. But Toyota knows their market like no other, and their customers don’t seem to mind that they’re missing out on the bells and whistles.

Nonetheless, the interior looks more graceful than the feature list. Materials feel superior and shapes and designs feel elegant. This test car is fitted with the fawn leather option, also known on the street as a ‘peanut butter interior’. It’s a change from the usual black colour schemes and it brightens up the atmosphere, but it can be overpowering. 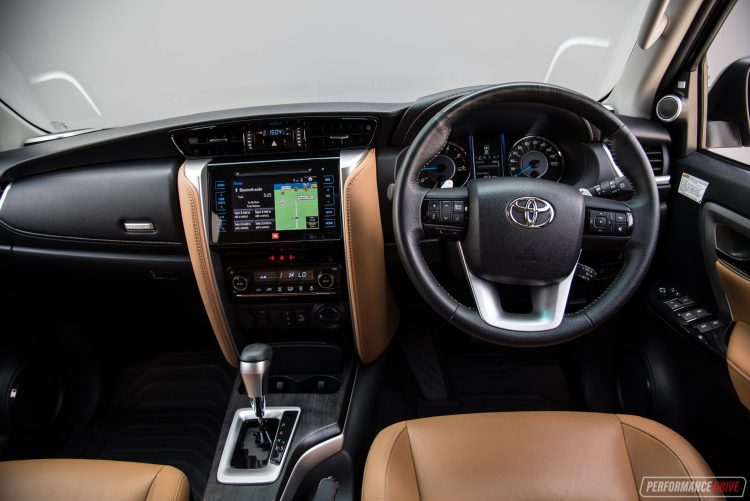 Seats are soft and supportive for any bumpy terrains in the front and second row. The third row is also great for accommodating the kids. When not in use, they swing up to the side of the cabin to create extra boot space. We have seen third row seats integrated more practically in other SUVs. Hanging the seats up is a little fiddley too, and when hung up, they take up a fair bit of boot space compared with some rivals.

When the third row is in use, you have 200 litres of space to play with; which is about average compared to the Mitsubishi Pajero Sport’s 131 litres and Isuzu MU-X’s 235 litres. But when the seats are tucked away, the 1080 litres presented does not measure up well in actual usable space. The Pajero Sport and MU-X provide 1488 litres and 878 litres respectively, but the third row seems to flatten away better.

Nevertheless, you are still provided with plenty of headroom and legroom, which creates a very airy and secure atmosphere inside. And speaking of air, we love the rear air vents with dedicated controls on the roof. There’s also some handy tuck-away hooks on the backs of the front seats, and a 220V power socket in the second row and 12V in the cargo area.

Exclusive to the Crusade is a JBL multimedia touch-screen with 11 speakers. The screen itself is not huge, but it does all you need it to do. The only gripe is that it takes too long to turn the volume down with the touch-screen, with no turning knob. 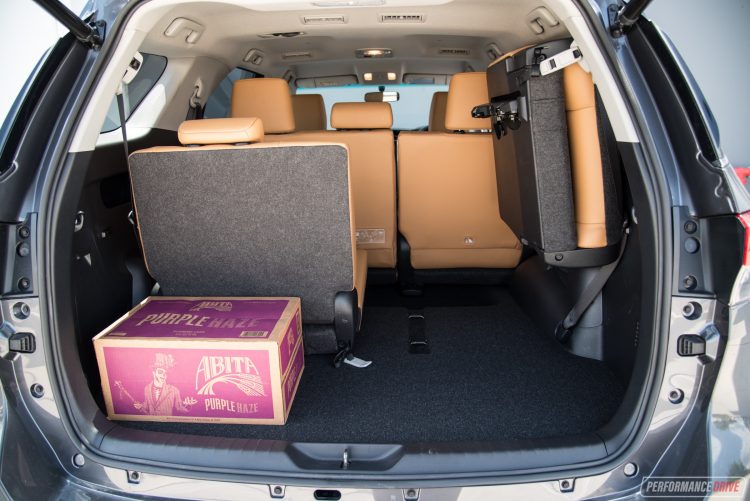 As you would expect, the Fortuner stands like a giraffe on the road. With the combination of the high seating position and long-travel suspension, you’re always looking down on the cars around you. Even though many underpinnings are the same as the Toyota HiLux, the suspension differs. It uses a beam axle and coils springs to provide less bounciness than what you’d find in the HiLux’s more commercial leaf springs. But, you still feel like you could just about run over anything and it won’t be deterred.

Handling is quite composed for such a tall and large mass, and considering the serious off-road ability. It leans into corners and doesn’t give into substantial body roll until you really push it, and that long suspension seems to tighten up the faster you go.

We find the steering to be light and easy to navigate through tight environments, even though more steering wheel rotations are required than your average car. But at highway speeds, it’s not very sensitive, which calls a bit of effort to keep centred. 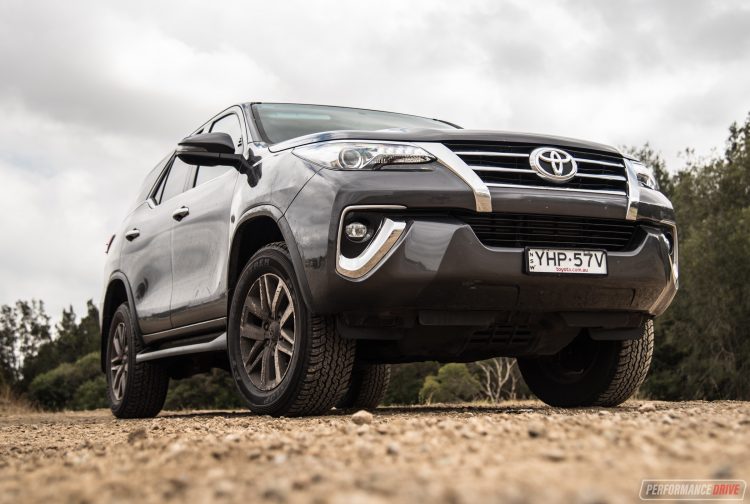 For the serious off-road business, the Fortuner has all the right traits; 216mm of ground clearance and an approach and departure angle similar to that of a LandCruiser – 30 and 25 degrees, respectively. It also has low range gearing, diff locking, protection plates underneath and Toyota’s marvellous Downhill Assist Control (DAC) function, which helps with driving down steep slopes where the engine brake is not sufficient to reduce the speed of the vehicle. This makes it possible to drive down slopes without the wheels locking. For more analysis on the Fortuner’s off-road abilities, see our previous off-road review here. If you’re planning to do some towing, the Fortuner pulls up to 2800kg (braked)

All Fortuners are fitted with the same 2.8-litre turbo-diesel four-cylinder engine, which has recently been boosted in torque output. It produces a plentiful 450Nm and a conservative 130kW. In practice, the engine gets the job done effortlessly low in the rev range. The engine freely revs while providing strong mid-range torque. In the heavy Fortuner though (2100kg) it doesn’t perform as well as you might expect. It almost feels like there’s no difference between driving normally and driving aggressively and flattening the throttle. It’s no problem though as the Fortuner is not designed to be a vehicle capable of breaking quarter mile records.

Out of curiosity we performed some sprint tests and it stopped the clock in 11.84 seconds across 0-100km/h, and 18.23 seconds across the quarter mile. The figures aren’t actually that bad. It’s the push in your back, or lack-thereof, that can be a little disappointing. A positive of all this is that the engine is very linear and quite smooth compared with the rivals.

Official figures for fuel consumption for the Thai-built SUV rate well, at 8.6L/100km on the combined cycle. In reality we couldn’t achieve a figure lower than 10.2L/100km. That is still better than our tested figures in the Pajero Sport and the Isuzu MU-X.

The Fortuner adds to the already huge SUV smorgasbord presented in Toyota showrooms. If you’re after something that can be taken off road and placed in very demanding situations, you should definitely consider the Fortuner and the Prado. About the only real difference between the two is the size. The Prado is a touch longer, taller and wider. Oh, and the Fortuner is a now a lot more affordable if you compare variant for variant.

CONS:
– Performance; engine overwhelmed by the weight
– Lacks some advanced tech that competitors get
– Third row seating mechanism is cumbersome