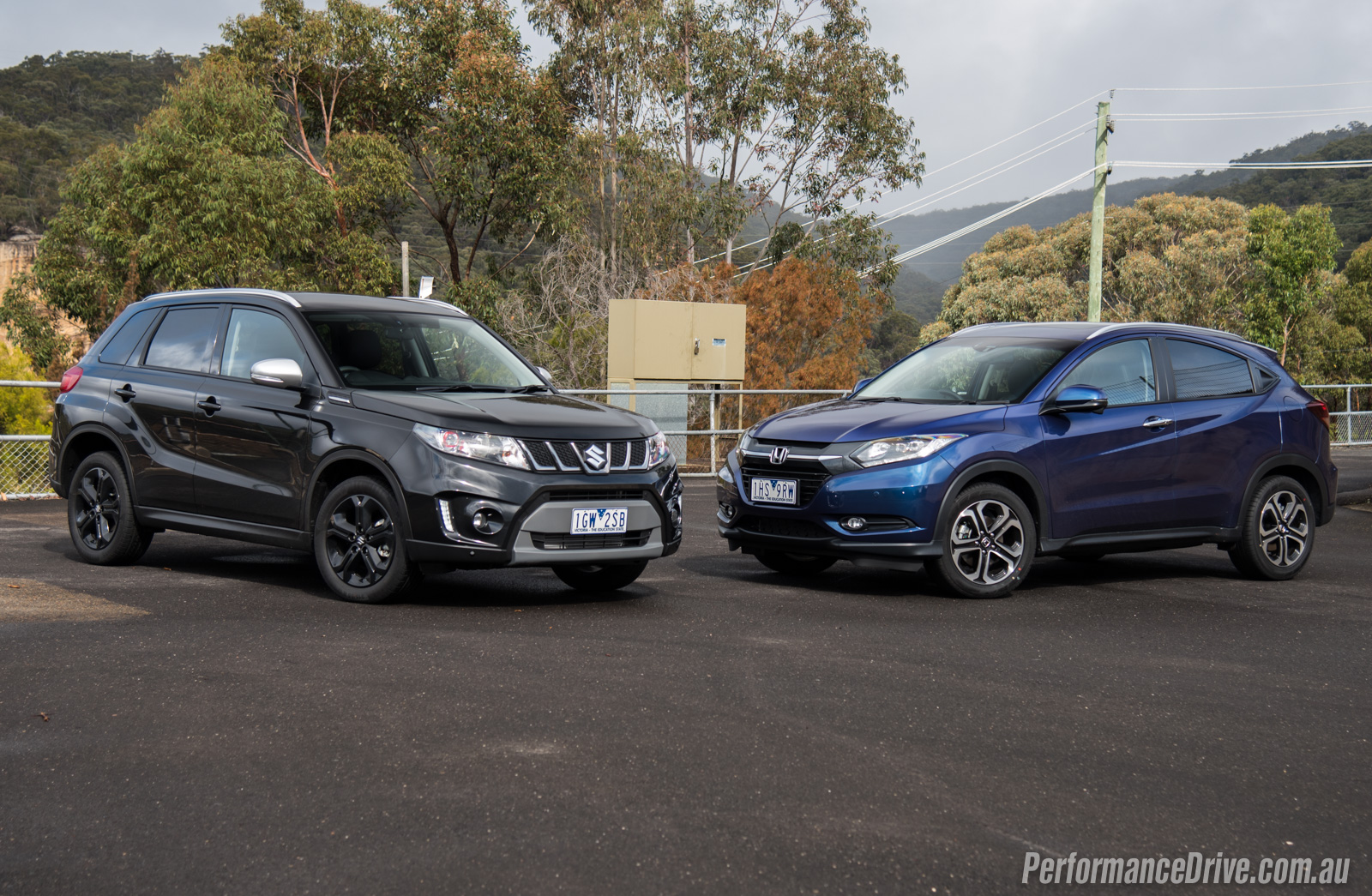 To try and help you decipher the small SUV market, today we’re taking a look at two Japanese underdogs of the segment; the 2016 Honda HR-V and the new Suzuki Vitara S Turbo. 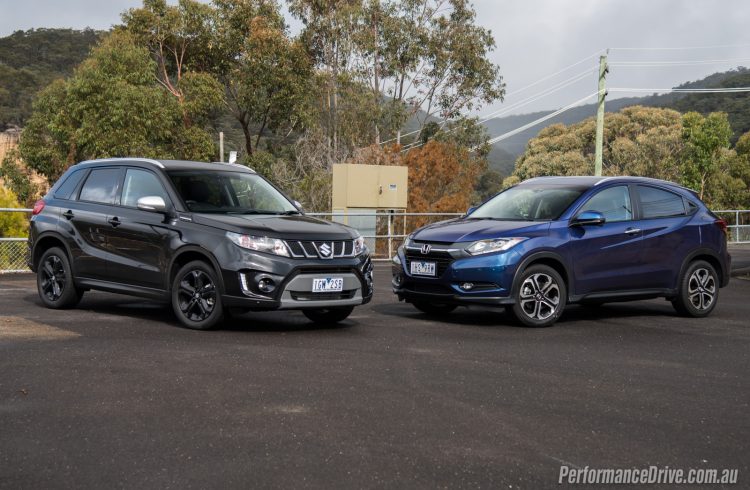 Both of these are quite popular in Australia, although, they can’t catch the sales efforts set by the Mazda CX-3 favourite and its close runner-up, the Mitsubishi ASX. Honda Australia has sold 7435 examples of the HR-V so far this year (through July), while Suzuki has sold 3415 Vitaras. Mazda, for reference, has sold 11,116 CX-3s.

Despite not being as popular as the class leaders, we think these two are, in a number of ways, more appealing. One has a distinct whiff of sportiness to it while the other displays a clear premium focus.

From Honda is the HR-V VTi-L, originally launching in Australia early last year. This comes with a range-wide 1.8-litre naturally aspirated four-cylinder producing 105kW and 172Nm. All HR-Vs in Australia are front-wheel drive and come matched to a CVT automatic. Prices for this variant as tested start at $33,340 (excluding on-roads).

From Suzuki is the Vitara S Turbo, based on the new Vitara. The new Vitara was launched in Australia late in 2015, with the S Turbo only arriving in April this year. Suzuki offers both front-wheel drive and all-wheel drive options, but only a six-speed auto for the S Turbo (non-turbo versions are available with a manual). The example here is the cream of the crop four-wheel drive S Turbo, featuring a 1.4-litre turbo-petrol producing 103kW and 220Nm. Prices for this version start at $32,990. 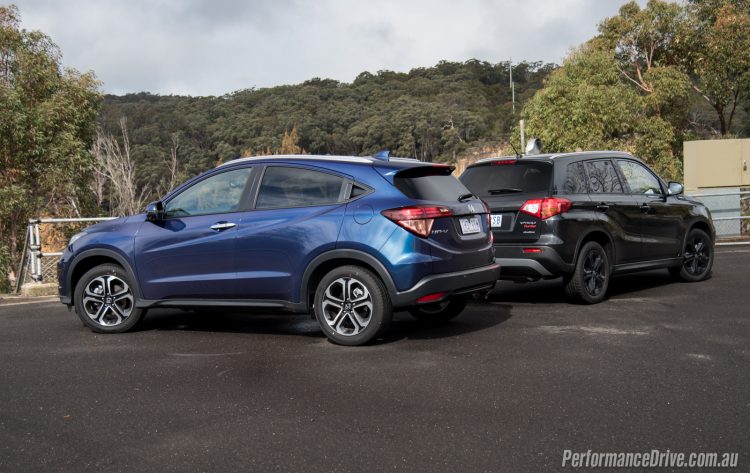 These two SUVs have a lot in common, but they also display very different personalities. For the Honda, it’s all about premium. From the suave exterior design with a coupe-like rear end, intricate and sophisticated detailing around the front, and unique vertical-oriented rear door handles, the HR-V is arguably the better-looking package.

It’s a similar theme inside. Honda has implanted its intelligent-inclined philosophy, with a gently flowing centre console doubling as a twin-level storage box, with a futuristic 3D instrument cluster and crisp dials. Most surfaces are of high-quality look and feel, with very comfortable leather seats for all passengers. There is a touch-screen interface with on-board media and various in-built apps, including a display for the clever blind-spot monitor which provides a view from a camera underneath the passenger-side mirror. 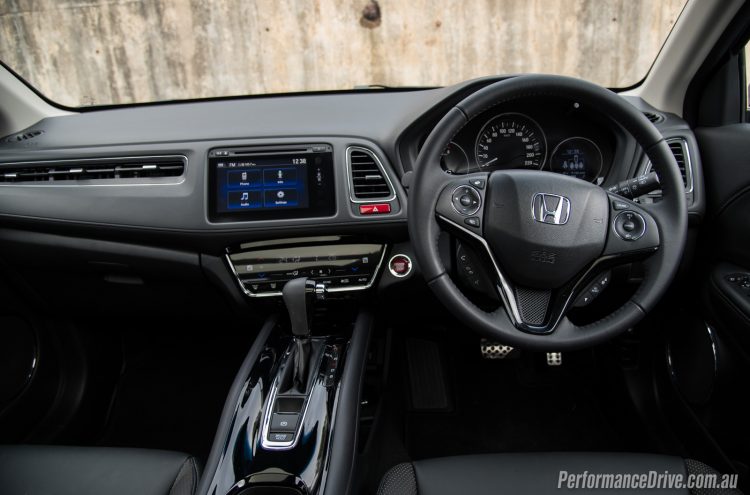 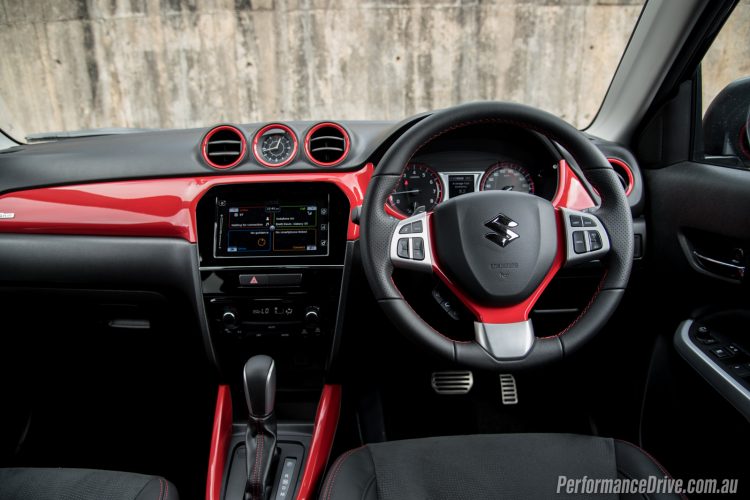 Stepping into the Suzuki, it’s clear to see (and feel) this is targeted at a younger demographic. It looks very sporty on the outside, with the fashionable black alloy wheels measuring 17 inches (same as HR-V). In our opinion, some of the design cues are sneakily borrowed from Range Rover, which can only be a good thing.

Inside, it’s the same story. This test car features in-your-face red highlights across the dash and console. These can be had in black as well if you’re after something more discreet. For the seats Suzuki has gone for suede-like upholstery with leather sections, with reasonably thick side bolsters to hold you in. We’d say the seats are a touch firmer than the ones in the HR-V, albeit more sporty.

Like the HR-V the Vitara comes with a touch-screen interface. It doesn’t get the clever blind-spot monitoring but it does come with sat-nav as standard. Sat-nav isn’t available on the HR-V. You do get a more perched up view in the Vitara, with higher-mounted seats along with 185mm of ground clearance. We think visibility is better in the Vitara because of this, but also thanks to thinner pillars and lower window sills. 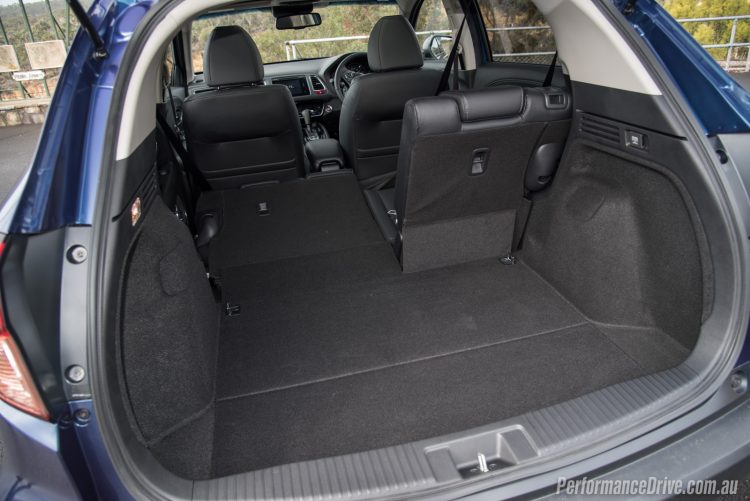 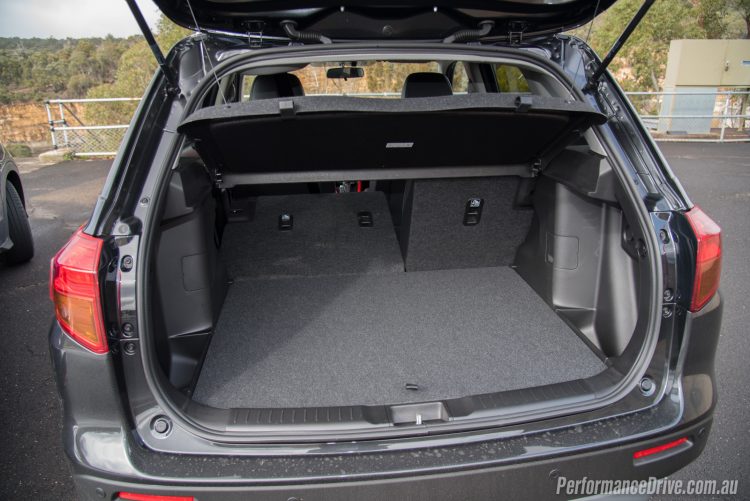 Driving the Honda is a quiet and comfortable experience. You feel cocooned in the cabin as you drive along, with high window sills and a low-ish driving position making it feel much like a hatchback. You are perched up slightly higher overall than a conventional hatch though, thanks to 175mm of ground clearance.

Handling and body control is on the soft side, making for a relaxing drive rather than a purely focused and responsive one. However, the platform does possess refined dynamics. Steering feel is progressive and light, with adequate feedback coming through the wheel. The platform always remains committed and compliant too, with the soft suspension perhaps coming in as the weakest link in terms of agility. Engine performance isn’t going to get you excited but it is smooth, especially with the seamless CVT transmission. We timed 0-100km/h in a lethargic 10.28 seconds.

On the road in the Suzuki, it, again, showcases a clear sporty personality. Throttle response is snappy, as is the steering, with a surprisingly torquey engine making uphill surging a breeze, especially compared with the Honda. Peak torque is spread from 1500rpm up to 4000rpm. Not only is the peak figure higher from the Vitara (220Nm vs 172Nm), it’s available across a broader rev range. This means you don’t have to push the turbo engine as hard, making it easy to notice and appreciate its broad usability. As a result, 0-100km/h comes up in a respectable 8.67 seconds. 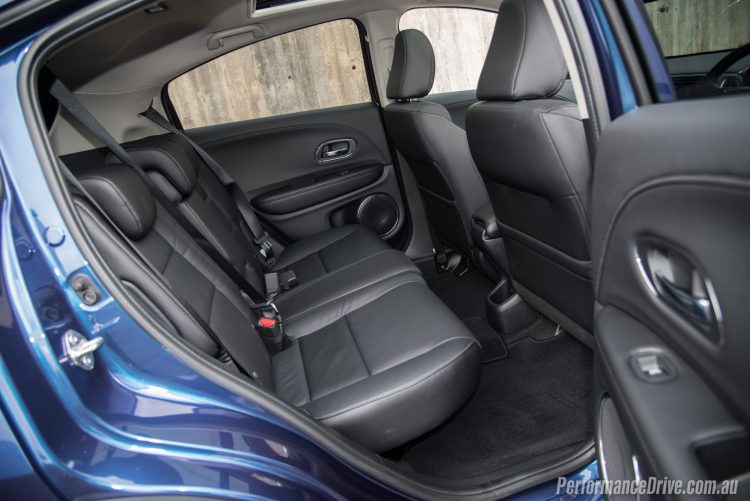 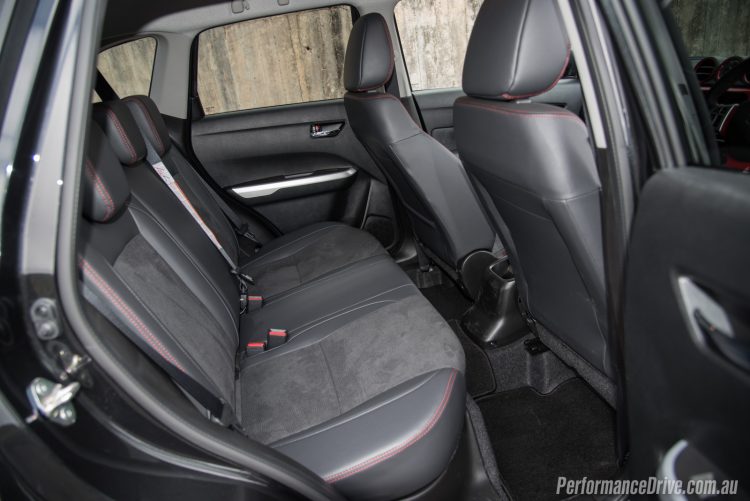 The Vitara isn’t as overall component or as dynamic as the Honda, with a noticeable top-heavy characteristic coming into play when switching between quick left and right turns. It’s not as confident, although it is playful and seems energetic, with tauter, rubbery suspension. Steering control can be a little nervous as the tiller is very sensitive – almost too sensitive. You can use the gears to lead into corners and slow momentum, which is something you can’t do with the Honda’s CVT gearbox. Both use a rudimentary torsion-beam-style rear suspension layout, with MacPherson struts at the front.

In terms of economy, both of these runarounds return brilliant real-world consumption. Officially, the Suzuki is rated at 6.2L/100km while the Honda is 6.9L/100km on the combined cycle. Although real-world tests come close to the official ratings, they are separated by a similar margin. We saw figures drop down to 6.0L/100km in the Suzuki during extended highway use, while the Honda dipped to around 6.5L/100km.

If you’re planning to do a lot of travelling, the Suzuki can become the superior option immediately as it is available with all-wheel drive. And as we’ve seen, there doesn’t seem to be any sacrifice in fuel consumption. We put this down to the turbo engine being ahead of its time, or rather, the HR-V’s 1.8-litre showing its age. The S Turbo also comes with a locking centre differential which, for us, proved very handy in slippery snow conditions – in Australia the HR-V would have required snow chains by law. 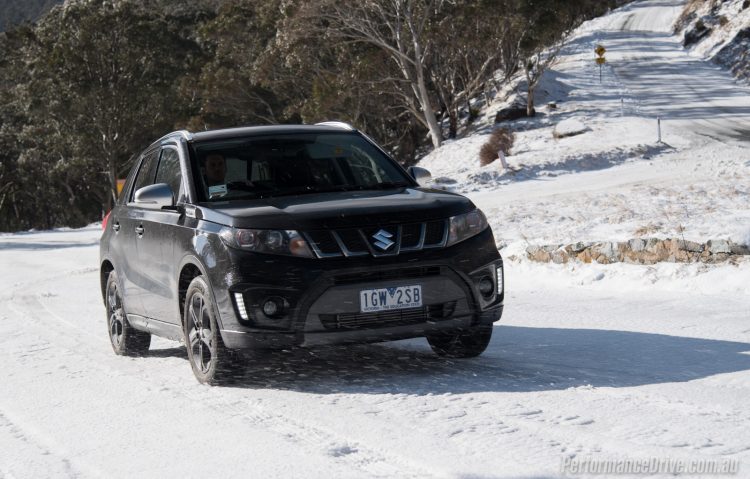 The verdict is actually quite simple. If comfort and quality is high on your priority, the Honda is the clear winner. It features a nicer interior with softer seats, a slightly more ergonomic driving position, and superb ride quality.

Which one would we buy? Both of these are great little SUVs, taking on different approaches to the flooded vehicle segment. For now, while we’re still young (sort of), we’ll take the Suzuki. But we’ll be looking forward to the more relaxing HR-V in the future.