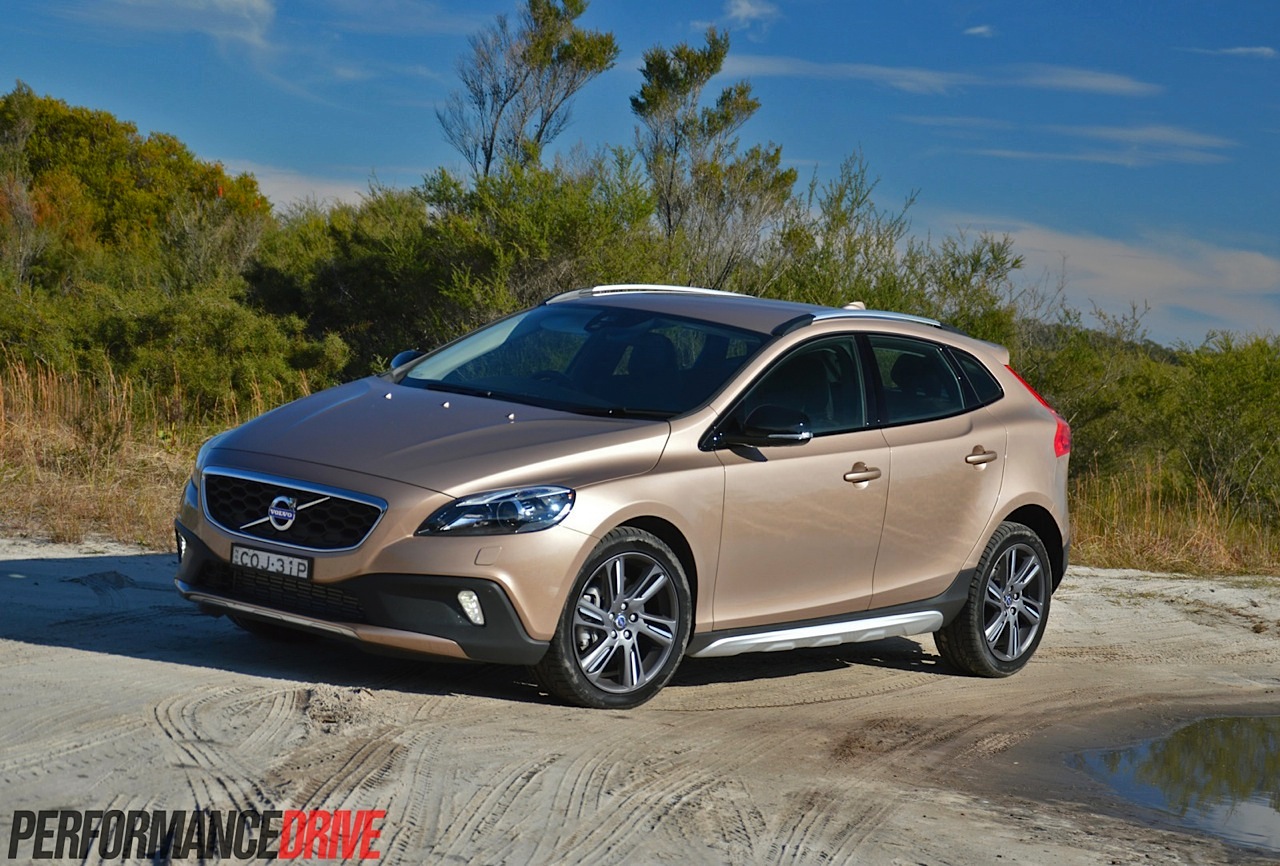 You might think you know the V40 Cross Country as it wears the company’s emblematic Cross Country badge. But this is Volvo’s first entry into the growing, small premium SUV market segment. It’s based on the competent V40 hatch, a car that sets benchmarks in safety and technology, only this is garnished with various recreational bits and pieces to suit adventurous lifestyles. 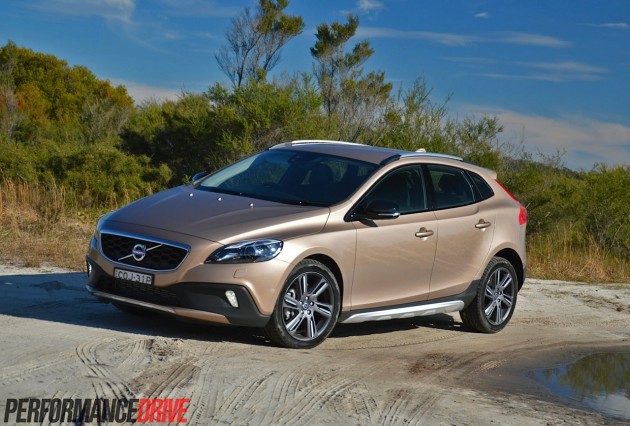 The V40 Cross Country was launched last year, about six months after the regular V40 arrived. It’s available in two model variants, including a D4 Luxury turbo-diesel five-cylinder, and this, the range-topping T5 Luxury petrol.

Both are equipped with a clever, fifth-generation Haldex all-wheel drive system and a six-speed automatic transmission. Despite being the same as the regular V40 underneath, no other V40 in the range offers all-wheel drive grip.

Like the regular V40 T5, the Cross Country T5 uses a Ford-derived 2.5-litre turbocharged engine producing a howling 187kW of power and 360Nm of torque. 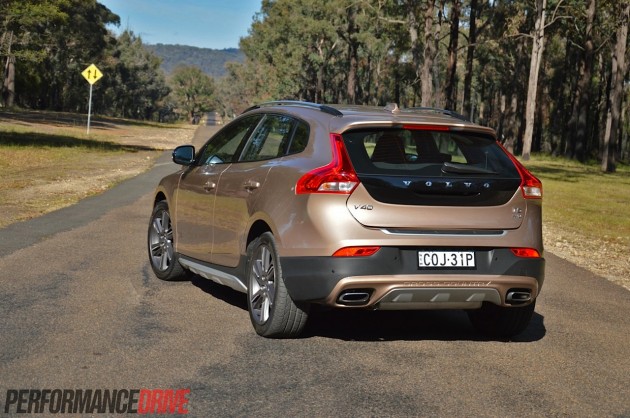 The Cross Country separates itself from the regular V40 via a tougher, more rugged exterior, with plastic scratch-resistant skirting around the sills and lower bumper bars, and silver scuff plates under all four sides. There’s also integrated roof rails so you can pack away the tent or rack up some mountain bikes, and some bespoke dark-finish 18-inch alloy wheels.

To help accommodate light off road duties the body is 40mm taller overall, however, it only offers 12mm more ground clearance (145mm) than the regular V40. This makes it 5mm lower than its main rival, the Mercedes-Benz GLA-Class (150mm).

Volvo has streamlined the Cross Country range so it’s easy to digest, with both variants showcasing the Luxury trim package as standard. This is the V40’s highest trim level option.

You get a pair of soft and supple sports seats in the front wrapped in leather, offering excellent comfort and support, while in the back is a similarly-themed bench with sporty contours.

Rear seat space is pretty good for this segment, presenting around the same amount of room as a Ford Focus. Headroom will probably be your main concern if you have a family of taller people to cart around.

In keeping with the theme of all of Volvo’s latest models, the V40 Cross Country interior design is clean and clutter-free, with cool modern dials and instruments, and quality materials. There’s a distinct Swedish feel to it.

The centre fascia ‘floats’ on a single panel, with minimal buttons and controls, surrounded by a suave metal trim, while up the top is a 7.0-inch multifunction screen as standard.

The screen isn’t a touch-screen system. Instead, Volvo uses one of the control knobs on the fascia as a rotary iDrive-like function for navigating through the menus. It’s pretty easy to grasp, although, it’s not as comprehensive as the systems presented in Audi or Mercedes.

Linked up to the unit is a cracking high-end eight-speaker stereo system. If you love to crank up some tunes while driving, you’ll love this stereo. It’s loud and clear, with plenty of bass, and it supports USB and MP3 formats. 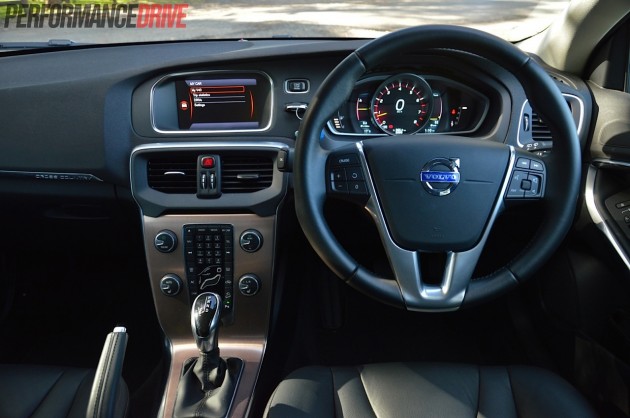 Carrying luggage is made easy thanks to a 335-litre boot. If you require more space, simply flick down the 60/40 split-fold rear seats and you open up over 600 litres. Further than that, the cargo area features a number of pocket spaces for smaller things and tie-down anchors for heavier items. Volvo also offers accessories such as a divider, and a floor mat organiser for further practicality.

Okay, so you’re thinking of buying a Volvo? This probably means you’re interested in getting the latest in cutting-edge safety. And there’s good news here, the Cross Country is one of the safest vehicles money can buy, just like its two-wheel drive brother. ANCAP has awarded it 36.67 points out of 37 in recent crash tests, which is about as high as scores get.

Aside from the significant level of engineering that has gone into creating a naturally strong and safe cabin structure, the V40 is packaged with some industry-first technologies which almost make you want to crash on purpose just so you can see them all working.

There’s a pedestrian airbag and an active bonnet that pops up during a collision with a pedestrian – an industry first – as well as nine other airbags, active headlights that turn with corners, auto high-beams, a rear-vision camera, and the company’s City Safety program which can detect and brake to avoid pedestrians automatically at speeds up to 50km/h.

Volvo also offers advanced radar-guided cruise control with auto braking, front and rear collision alert to help reduce the chances of heavy traffic accidents, blind-spot warning and pedestrian alert, and automatic parking as an option. In other words, if you want the maximum safety a vehicle can offer in this day and age, this is as safe as it gets. 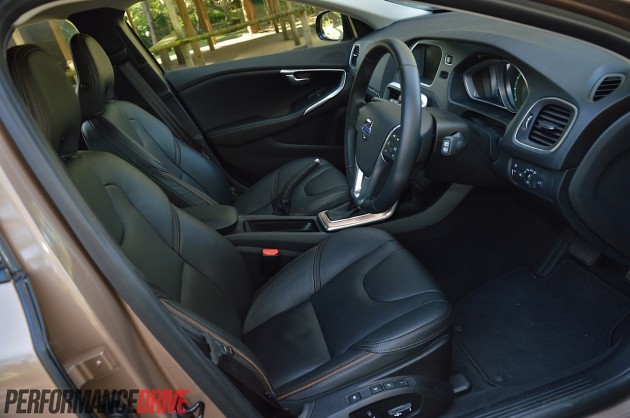 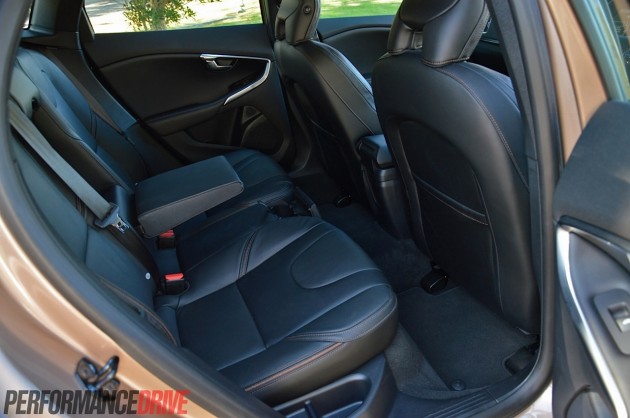 Being loosely based on the Ford Focus platform, the V40 is a nice driving machine. The steering, while not the most precise in the class, is direct enough to support active and enthusiastic driving styles while also providing a relaxing, gradual feel out on the highway.

With all-wheel drive the V40 CC is noticeably more stable than the regular V40, whether you’re tackling some bends or simply out on the open road in the rain. And if you’re feeling a bit frisky you can throw it around in the corners and it simply grips up and goes. Mid-corner acceleration and handling is especially good. It hangs on and pulls you around with utter confidence.

You might not think of the V40 Cross Country as a performance car, however, the 2.5-litre turbo five-cylinder engine pushes the V40 along with more than enough grunt to get you excited. Power peaks at 187kW, which is very impressive for a regular model, with strong torque available across the entire rev range.

There’s very little evidence of turbo-lag, at least not the sort of turbo-lag that causes any sort of delay or sudden rise in forward acceleration. Thrust is smooth and builds progressively. In fact, maximum torque is at your service from just 1800rpm, and you can ride the 360Nm wave all the way up to 4200rpm. From there, the turbo is well and truly supplying enough boost pressure to carry it up to peak power at 5400rpm. 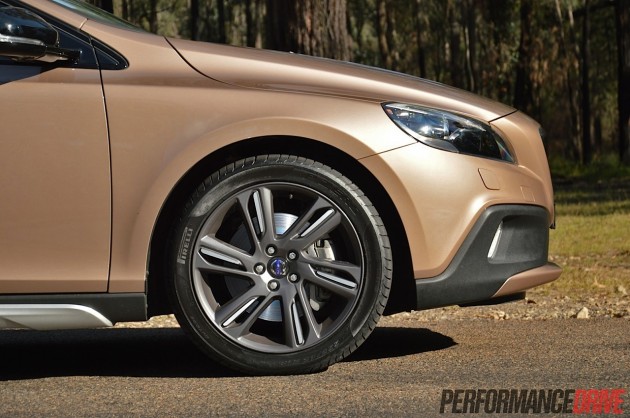 Out on the tarmac we timed 0-100km/h in a respectable 6.8 seconds. This is the sort of time we’ve come to expect from a proper hot hatch. In a multipurpose vehicle like this, it’s a pure bonus.

The six-speed auto is probably the least enthusiastic element of the drivetrain. It’s smooth with suitable ratios, but it’s not as sporty as the engine. If it came with a quicker-shifting automatic, a dual-clutch unit for example, we think low 6.0 seconds would be quite achievable.

Speaking of multipurpose, the Volvo Cross Country nameplate has a bit of a heritage behind it, with models stemming back to the V70-based Cross Country from 2000-2002. We’re not convinced this junior version deserves the name though.

It is four-wheel drive and the body is raised, but it’s just not a vehicle you want to take for a splash in the mud, whereas the original, you definitely would.

The ground clearance is not high enough to get over anything much taller than a gutter, and the 18-inch wheels and 40-series tyres are just too low profile and sporty to provide any real flex or grip on rugged terrain. Instead, this is a great setup for dirt roads and camping grounds, or a trip to the snow. 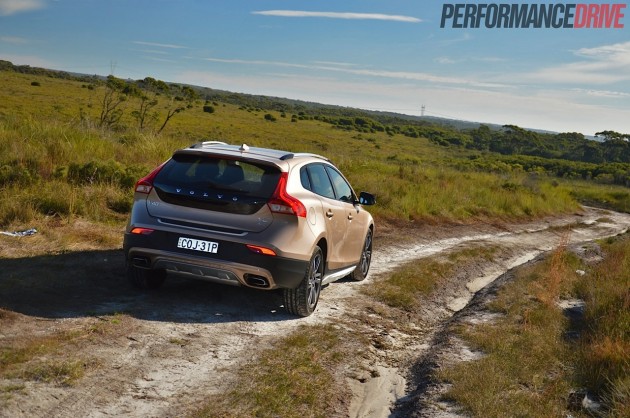 The V40 Cross Country is a great concept, and the market shows there is a demand for vehicles like this. It offers all the benefits of the V40 hatch, including the abundance of safety advances, with a slightly more rugged personality to support some off-roading.

We love the 2.5-litre turbo five-cylinder engine (and its howling soundtrack), and the elegant and calming interior. On the negative side, we think the auto could be better, and the ride height could be higher to give it proper crossover/SUV authority.

CONS:
– Too sporty to deserve the ‘Cross Country’ badge?
– Six-speed auto lacks refinement
– Some safety tech is optional and costly 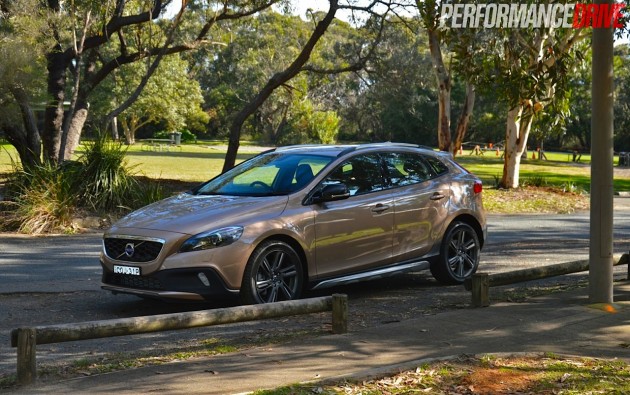