It’s turbocharged and supercharged, and it is probably one of the best-looking SUVs in the class. Yes, we are talking about a Volvo here. This is the all-new XC90 T6 R-Design, which also happens to be enhanced by Volvo’s motorsport partner, Polestar. 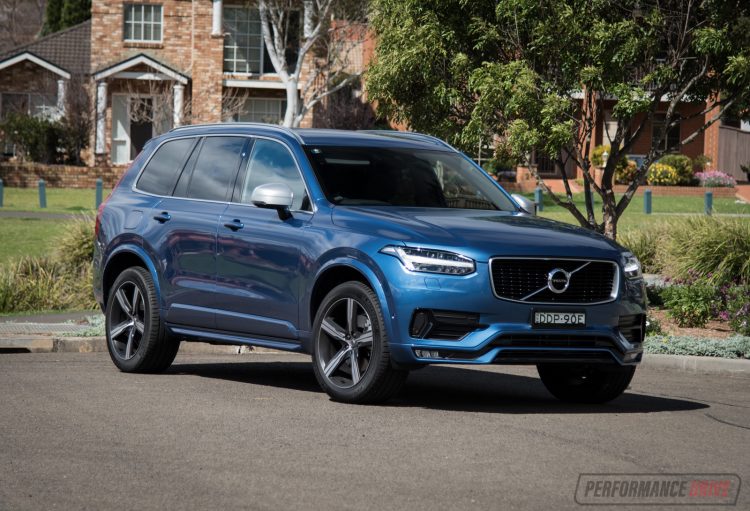 You probably wouldn’t have predicted Volvo to make such a U-turn to become the manufacturer of some of the nicest car designs out there, especially in contrast from its old boxy theme. Design is obviously a subjective thing and everyone has their own preference, but we’re sure most would agree the new XC90 is a superb take on the large seven-seat SUV class.

We tested the XC90 T6 Inscription last year. That’s the luxury-focused variant, presenting Volvo’s latest and greatest technologies, including a clever autopilot function (optional) that is capable of autonomous driving in traffic conditions. This T6 R-Design is the sportiest variant, featuring a discreet styling package and a performance-oriented interior. It’s still a seven-seater with many bells and whistles, but how does it shape up as a sports SUV? Let’s find out.

Prices for the XC90 T6 start from $93,950 for the entry Momentum, with the R-Design sitting at the top of the range priced from $101,950. This is the highest performance XC90 available until the anticipated 300kW T8 hybrid arrives (soon). 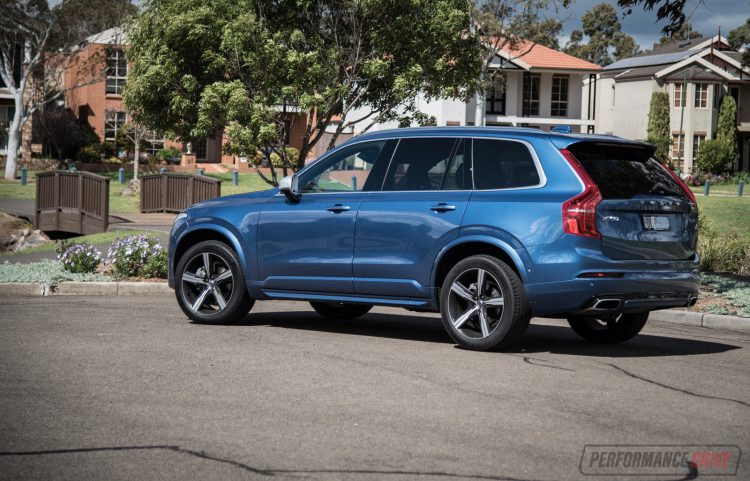 If you’re after a seven-seat SUV, the XC90 is one of the few in the class that you can truly classify as a seven-seater. The adjustable second row means the third row can offer respectable space. If you only need five seats, the second row can present abundant room when slid all the way back. It’s massive in here, with good headroom and legroom in all rows.

Most passengers are treated to some cool features too. For the middle row there’s a touch-screen pad for the four-zone climate control, with venting in all three rows. All three also get their own cup holders, and sporty-contoured leather-wrapped seats. The bespoke R-Design front bucket seats in particular are a standout, offering excellent support, range of adjustability and long-distance comfort. 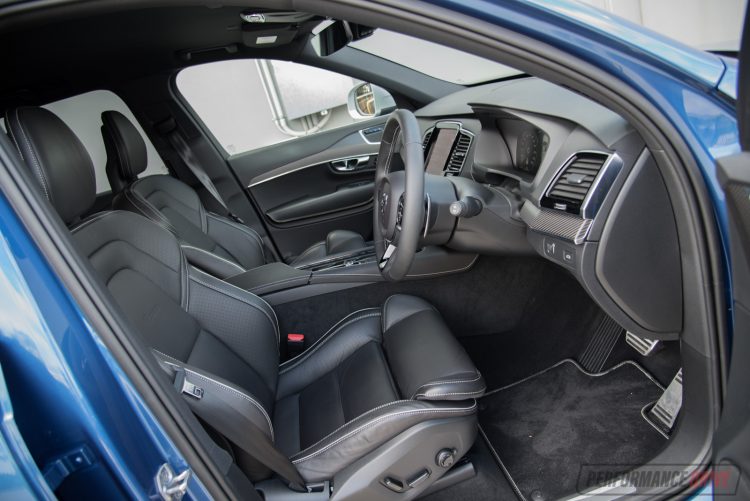 For the front passengers there’s a vertical 9.0-inch touch-screen interface which houses all of the on-board entertainment and climate functions. We found it a little perplexing at first. More so than other giant interfaces like this. Some of the menus aren’t as intuitive and it can be hard to find relatively simple commands. There’s no ‘back’ button either, although there is a central home back to bring your back to safe ground if you find yourself too deep within the system.

There are a heap of on-board apps thrown in, including internet-based radio systems like Pandora and TuneIn digital radio, as well as plenty of safety gadgets that you can easily turn on and off. Hidden away up the top of the screen is the settings menu which gives you access to more technical elements of the car, such as the sound and navigation settings, and Volvo’s traditional My Car menu. Some of the functions in here can also be accessed via swiping right on the home screen. This is what we find a little confusing as some things are doubled up yet not easily found in the first place. In any case, the interface is a big step ahead of Volvo’s just-superseded non-touch, one-dial system still found in models like the V40, S60/V60. 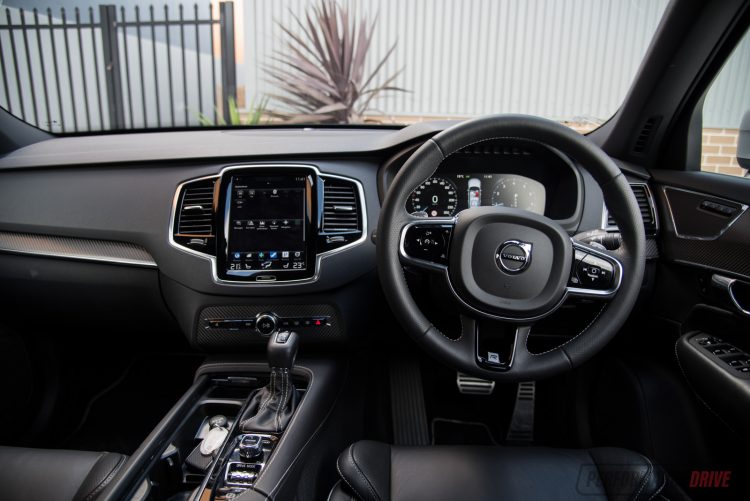 For the driver there’s a fully digital 12.3-inch instrument cluster. This can be configured in a number of ways, with various gauge themes and even an option to show map navigation information. On this test car there were two buttons on the steering wheel, presumably for radar cruise control adjustment, which, as it wasn’t fitted, do absolutely nothing. We’ve seen button blanks before but this is the first time we’ve seen functioning buttons that simply don’t do anything. Navigating through the instrument cluster menus and various displays does take some getting used to, with some features accessible on both the touch-screen and via the steering wheel.

Overall, this is a superb interior. It’s a place that is comfortable, accommodating and entertaining. It would be a great place to spend hours on the road with all of the family. We do like the lighter-coloured interior options though as the black (as tested) is obviously subjected to more heat and perhaps isn’t as inviting for initial door-opening wow factor. We also love the real carbon fibre trimmings instead of the usual painted-on crap you get in many other cars – finally, a carmaker that understands the appeal of real carbon. 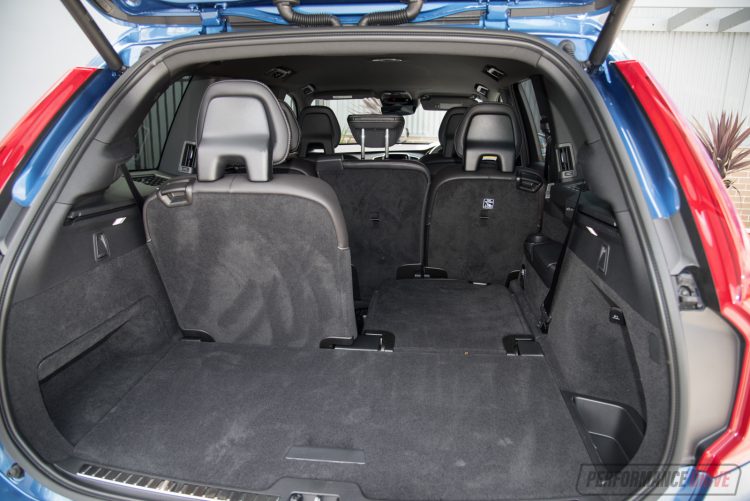 So, firstly, how safe is the XC90? It’s been rated five stars by ANCAP, of course. But unfortunately the real clever safety tech – the stuff that probably makes you want to buy a Volvo in the first place – is optional. The IntelliSafe Assistance package is perhaps the most sought-after, bringing in fully adaptive cruise control with steering assistance and forward collision protection with automatic braking capability. This will set you back an additional $2600, which isn’t that steep but for a near-top-line variant with a retail price of about $100k, it should be standard we think. You can also go for the Driver Support package which has everything above and adds head-up display with front and side cameras for $4000. Some options, like different interior trimmings and bespoke colours, are acceptable on a premium car we think. But for Volvo, a brand that boasts safety, some of these should be standard.

For the rest of the vehicle though it is very advanced and extensively equipped for optimum safety. The R-Design comes with ‘run-0ff road protection’, road sign recognition, blind-spot warning with rear collision alert, cross-traffic alert, understeer control and roll-over protection, lane departure warning, and Volvo’s City Safety technology with pedestrian detection and intersection collision mitigation. All as standard. There’s also at least nine airbags, whiplash protection, and active bending LED headlights. Basically, if you crash (some how), you’ll have an arsenal of systems on your side to try and protect you and your passengers from injury. 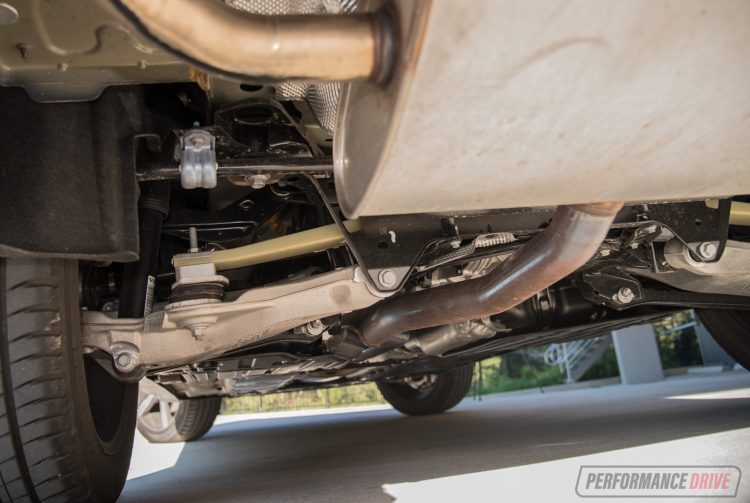 We say ‘if you crash’ as the XC90 is quite a capable vehicle. The handling is especially impressive, remaining flat and neutral in the bends, even during fast switchbacks and sudden directional changes. Poke your head under the vehicle and you’ll see there’s a sophisticated suspension setup with an innovative stability bar running over the wishbone ‘integral link’ rear suspension, and a double-wishbone setup at the front with an aluminium strut tower brace. All XC90 variants (in Australia) feature a ‘Touring’ chassis with no sports suspension option even for the R-Design. Buyers can, however, option for the air suspension setup with selectable driving modes ($3760).

Down our usual winding road test the XC90 R-Design was confident, secure and predictable. You can feel when the premium-grade Michelin Latitude Sport 3 275/45R20 tyres are nearing their limits, with an engaging steering setup leaving the driver feeling like an important part of the equation. Body control is surprisingly adept, with very little roll albeit with a reassuring lean as it braces itself for the corner. It’s enjoyable too, and that’s probably the most impressive part. 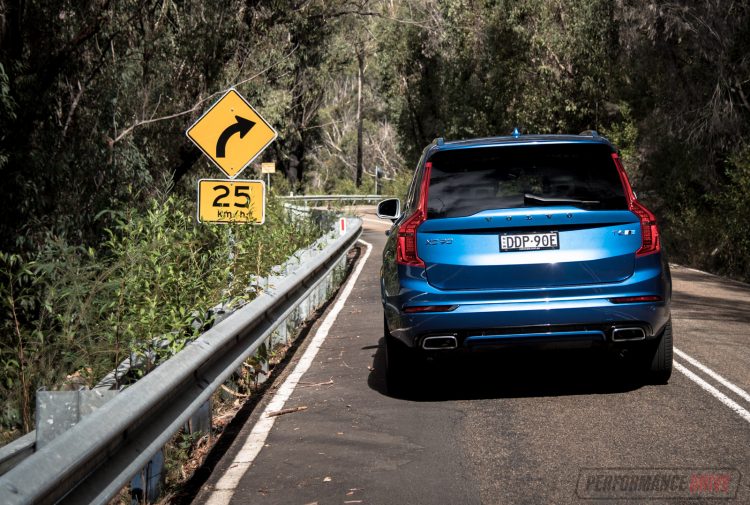 As for the drivetrain, the XC90 features Volvo’s latest ‘Geartronic’ eight-speed sports automatic gearbox, which is made by Toyota-owned Aisin in Japan. There are paddle shifters so you can drive like a racing car driver, and a drive mode select system which provides different gearchange patterns for multiple occasions. In comfort mode the transmission seems to be a bit indecisive. Turning into steep streets, for example, it often can’t decide whether to kick-down or remain in a gear, or change up a gear for that matter. It seems to try and hunt for the best fuel economy most of the time but in variable instances it kick downs abruptly. We think there is some finer calibration to be had – we remember finding similar behaviour in Volvo’s six-speed predecessor, also made by Aisin.

In sport mode the transmission behaves much more consistently, for sporty driving anyway. It also provides very quick gearchanges, up and down, with a neat little blip of the throttle when you turn up the heat. Using the paddle shifters solves the minor issue mentioned as you can decide what gear it should be in for any given occasion. You also get to use the precision-made aluminium-trimmed shifters attached to the wheel. 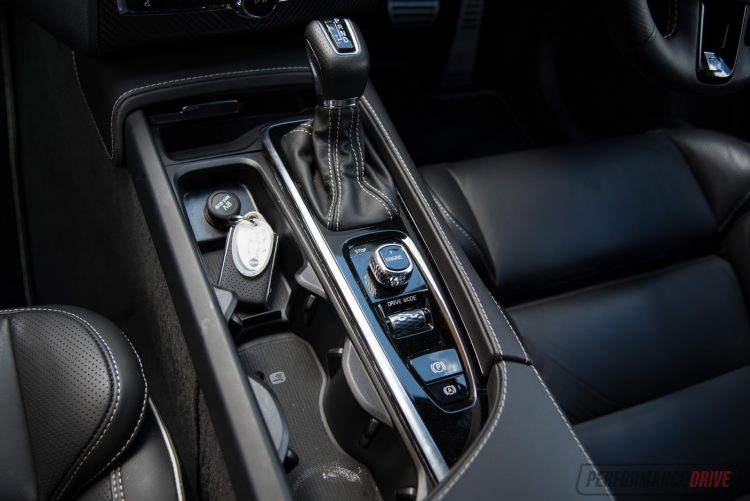 Going for the Polestar tune does get you more power and torque, up from 235kW to 246kW and from 400Nm to 440Nm. However, peak torque is reached at 4500rpm, right in the meaty section of the rev range. Without the tune, the 2.0-litre four-cylinder engine’s 400Nm-peak is accessible from a wider 2200-5400rpm rev range. Peak power with the Polestar tune is also achieved at 6000rpm, some 300rpm higher than the regular tune. This means, on paper at least, the Polestar upgrade isn’t as versatile as the regular setup, but it is peakier and enjoys higher revs like a traditional sports car.

What does this mean out on the road? Not much. The XC90 T6 goes like stink in either case. If anything, when you require full power, that is, when you nail the accelerator pedal to the floor, the Polestar tune really gets up and goes, noticeably harder than the standard model. We timed 0-100km/h in 6.69 seconds, slightly bettering our 6.7-second effort in the regular 235kW T6 we drove last year (back when we used to round to the nearest one decimal place. It recorded 6.72). Both times are very quick, especially for a modestly-enriched variant of a luxury seven-seat SUV. Accelerating from 0-100km/h doesn’t tell the full story though; it’s the rapid cross-country touring ability that you’ll notice most.

If you were afraid there wouldn’t be enough punch because the engine is ‘only a 2.0-litre four-cylinder’, you needn’t worry. You won’t be disappointed about the T6’s performance or breadth of useability. It’s also quite economical. We experienced an average fuel consumption of around 9.8L/100km on test – not bad for a big petrol seven-seater that’s this quick. Officially, consumption is rated at 8.5L/100km and we think you could get near that in more regular, real-world conditions.

We love the quality materials inside and the large and accommodating interior. We also love the chic Swedish design inside and out, giving it a real advantage over the German rivals which look like most of their furniture is pulled from Office Works. About the only area we think that needs consideration is the touch-screen interface, which seems like it might have been engineered by a niche electronics supplier (or Volvo itself). The calibration for the eight-speed auto could also do with some finer tuning. These are very minor criticisms, leaving, in our opinion, the XC90 at the top of our seven-seat luxury SUV wishlist. 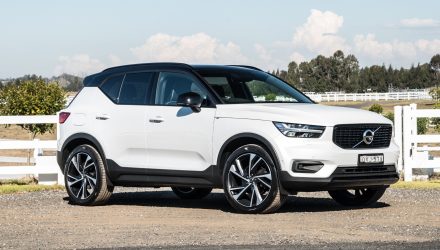 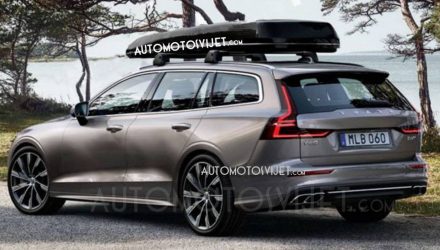 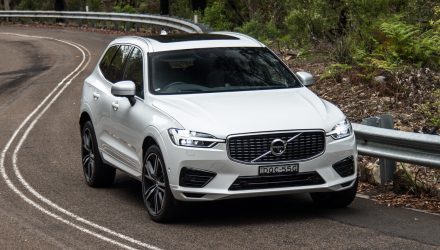 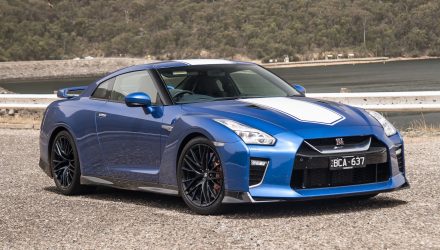 PerformanceDrive is a leading auto website and YouTube channel in Australia, with a special interest in performance testing of new vehicles.

700hp 😳 Review and video over @ performancedri