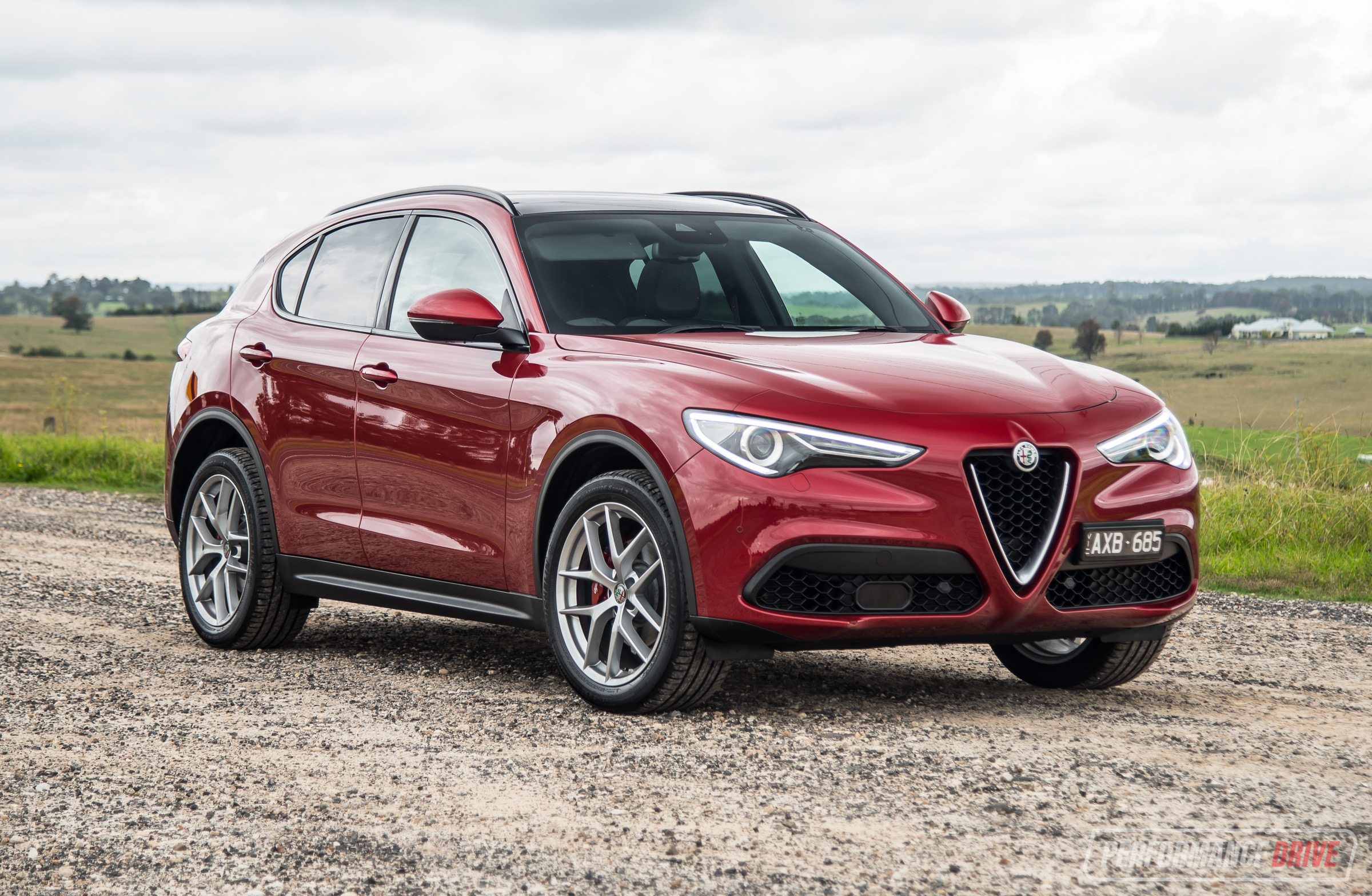 Alfa Romeo has entered a new territory with the Stelvio. It’s the prestigious Italian carmaker’s first ever SUV. Yes, the brand has the soul and design of ultimate driving machines not usually achievable in excessive SUV form. So how can you keep that notion going in an SUV? Well, Alfa is only getting with the program that more and more of us demand, and hopefully it will still appeal to enthusiasts. 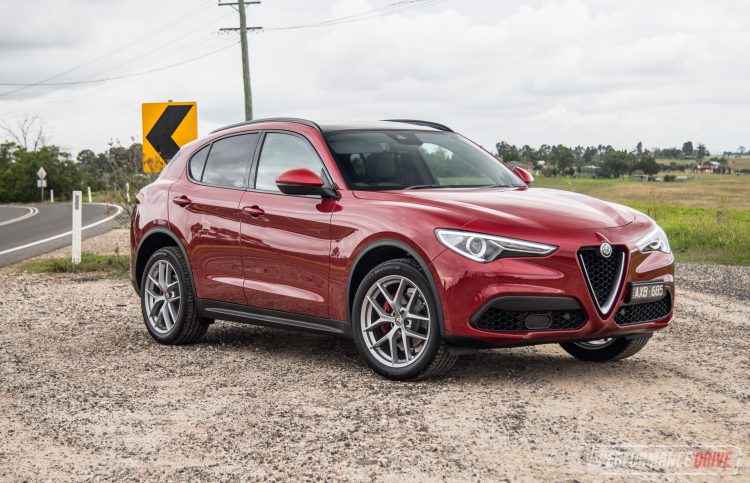 The Stelvio would appeal to prospective car buyers considering the likes of the Audi Q5, the BMW X3, and the Jaguar F-Pace and the such. Prices begin at $65,900 for the base model, and peak at $149,900 for the noble Quadrifoglio. In the middle, the Ti we’re testing here retails from $78,900 (all excluding on-road costs).

There are two engines available in the base model; a 2.0-litre turbo-petrol producing 148kW and 330Nm torque, and a 154kW/470Nm 2.1-litre turbo-diesel. The Ti comes with a four pot 206kW/400Nm turbo-petrol engine. And the Quadrifoglio raises hairs with a 375kW/600Nm 2.9-litre twin-turbo V6. All models are matched to an eight-speed automatic transmission, and on-demand all-wheel drive system. 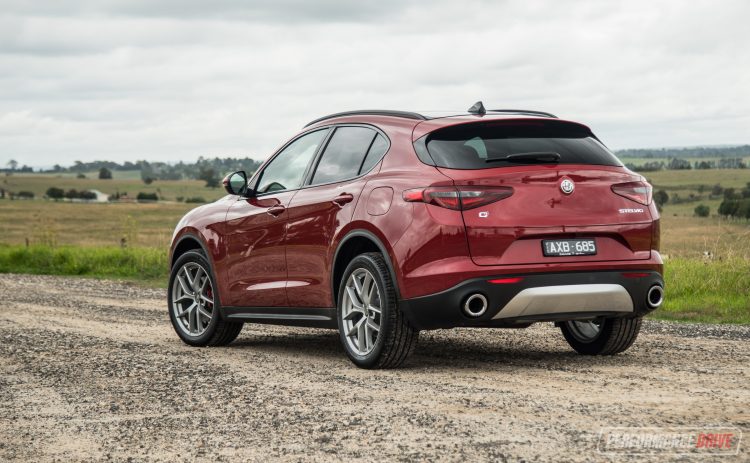 The new Stelvio is leveraged from the same platform as the Giulia, and is made at the Cassino assembly plant in Frosinone, Italy. It also inherits much of the design language from the Giulia. The front end sports the famous triangle-shaped black grille, and the slanted, aggressive headlights. Smooth and rounded contours flow through the body, which puffs up the overall stance of the Alfa. The rear sports a high-waisted design with a low profile rear windscreen. From top to bottom, we think it exerts a sporty but more elegant appeal than rival SUVs.

On the inside, the interior adopts a quirky design that is made up of many circles. Materials feel premium in quality, but the placement of buttons and controls are quite unconventional – even sliding towards impractical. For example, the indicator stalks are too far away from the steering wheel. A cubed tissue box won’t fit in the centre console. And water bottles don’t fit in the door pockets. You will need to spend a little more time than the average new car to get used to where everything is placed, too. 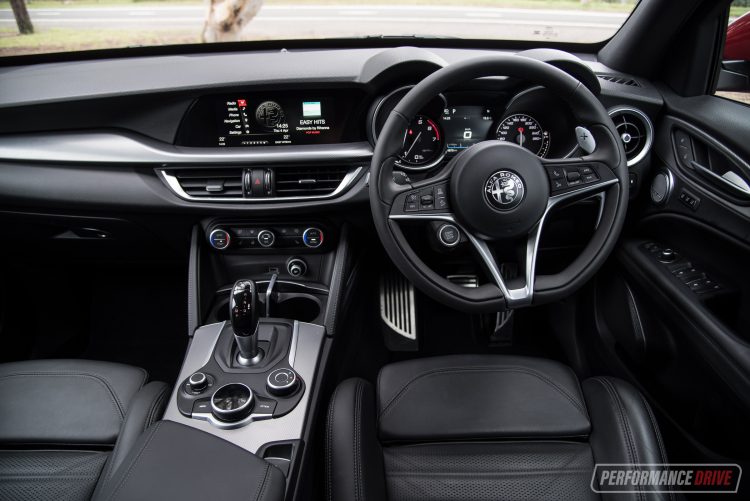 In the front row it does feel roomy, meeting class standards for headroom and legroom. Being designed as a driver’s car the seats are heavily bolstered to hold you in place. Bigger bodies might become uncomfortable during long trips though due to the shapely bolsters, but they well serve their supportive purpose when taking on sharp corners. And there are heaps of settings that might help you find your ideal comfort spot.

Because the front seats are so heavily bolstered, passenger space in the rear is compromised. Having said that, the Stelvio is not aiming to be a large SUV, so enough room is provided for a smaller young family. Rear passengers are also well catered for with thanks to climate vents and twin USB ports. 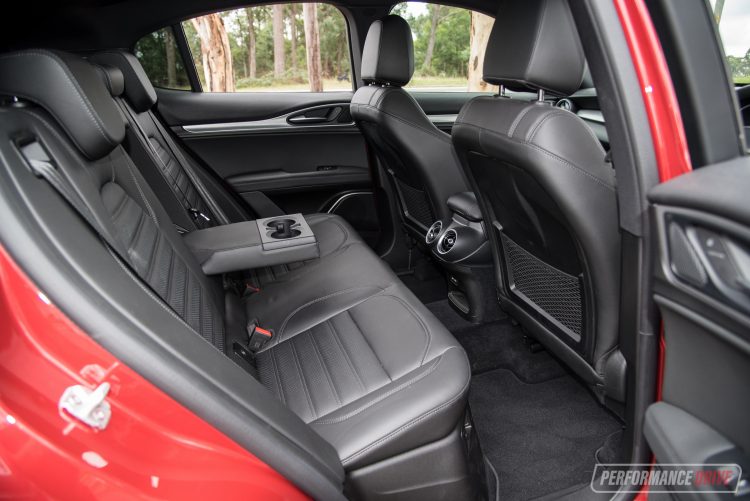 The infotainment screen in the front is controlled easily by a wheel system on the centre console, and air-conditioning settings are controlled by separate dials in the dash. These interfaces are quite intuitive and yet showcase some unique design flair. Unfortunately, the standard 10-speaker sound system is not up to the benchmark for this segment. Even though this tested model is fitted with the optional 14-speaker Harman Kardon sound system with a subwoofer, we find it has very little bass, and sounds inadequate compared to other Harman Kardon systems we’ve heard.

Boot space is narrow-ish, but long. That optional sound system takes up some room on the left side with the fitment of the subwoofer. At 499 litres, it is 51 litres smaller than both the Audi Q5 and the BMW X5 (550L each). Putting the rear seats down will expand the space to 1600 litres – the same as the leading rivals. Run-flat tyres are used to save boot space, which may not suit frequent dirt road users. 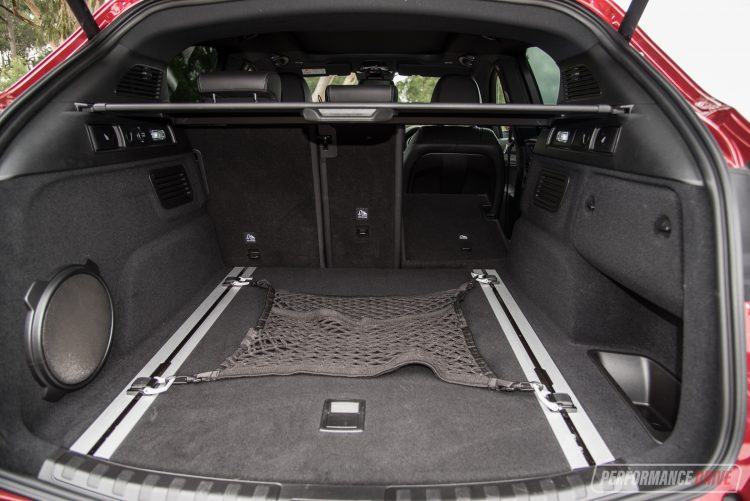 Alfa Romeo offers a three-year/150,000km warranty, and servicing is required every 12-months or 15,000km. Alfa and indeed FCA doesn’t have the strongest reputation for reliability. Therefore, lifting the standard warranty to the increasingly-spreading five-year standard could be especially important for the brand to help win potential buyers over. 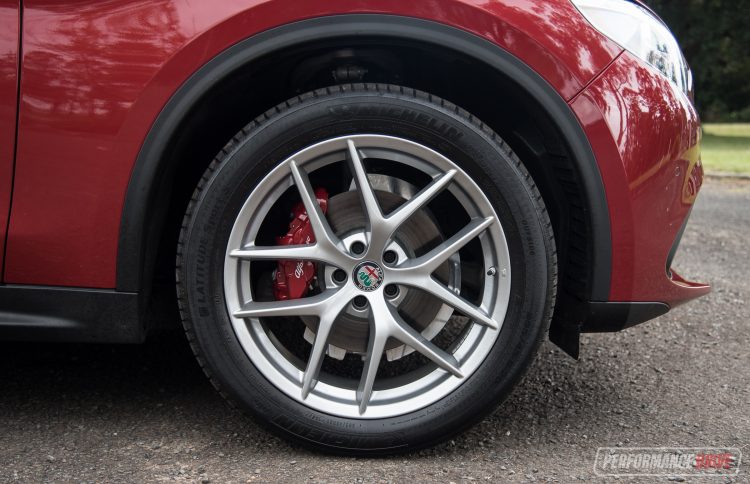 The Stelvio excels the most with its performance and driving engagement. The 2.0-litre petrol engine is characterful and punchy – the way it should be for an Alfa. The full 206kW kicks in at 5250rpm, which is fairly low for a petrol engine. But it isn’t afraid to roar right up to the limiter. 400Nm of torque is also commendable for a petrol SUV. It will charge up any hill with a full load with no trouble.

Driving in regular mode exhibits a noticeable delay in throttle response, but selecting the Dynamic mode minimises this trait. The mid-sizer weighs 1619kg, which is very light for this class. And that obviously helps with performance, with an official 0-100km/h claim of 5.7 seconds. Our testing returned a 6.16-second time. We also love the sound of this engine. For a four-pot, it sounds brilliantly aggressive from in the cabin, and roars unlike other engines of the same dimensions. 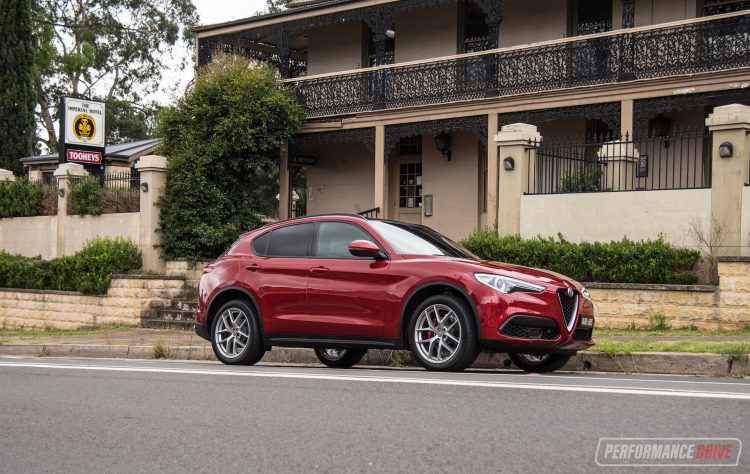 The eight-speed automatic is appropriately snappy under hasty acceleration, and you can get more interaction by operating the huge paddle shifters. But gear changes don’t seem as sharp in slow-moving traffic, although it is more comfortable. After going through the transmission, power is sent through Alfa’s rear-biased ‘Q4’ all-wheel drive system.

The downside to such a well-performing engine means that fuel consumption takes a hit. Official consumption figures say the average is 7.0L/100km. We weren’t able to achieve anywhere near this. Even when we cycled through a tankful of petrol gently with the throttle, we could only achieve as low as 9.8L/100km. 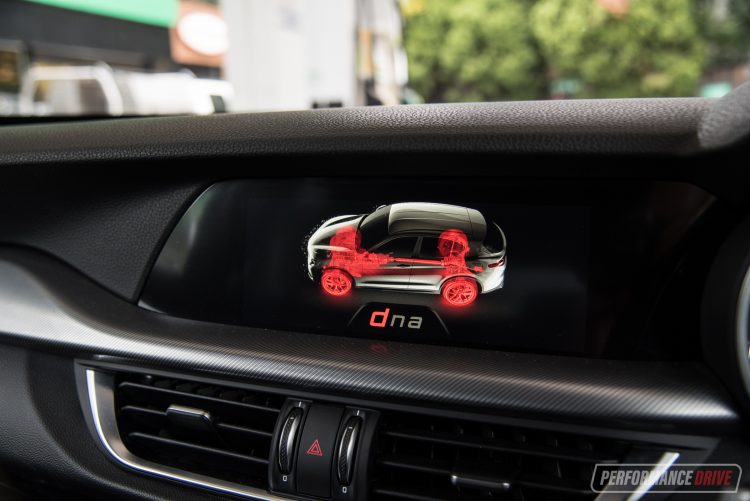 Driving dynamics are everything you would expect from the storied Italian marque. Even though the Stelvio is the tallest car Alfa has built, the driving enjoyment, agility, and passion have not been weakened. It hangs onto corners like it’s on rails, and it feels planted and displays minute body roll. The heavily-bolstered seats really help here.

On the freeway the steering can seem to sensitive. Only little movement of the wheel is needed to get the car changing directions. This is the same at low speeds as well. We guess it can support and even encourage sporty driving, such as driving up or down the famous Stelvio Pass, of which it is named after. But sometimes the sensitive steering makes it difficult to simply relax and cruise.

In the city, the Ti’s firmer suspension tune might feel a little firm to some. But that’s the price to pay for that athletic and super-agile handling. There is an active suspension option for $2200, if it bothers you, allowing you to shift to a soft damper tune while in Dynamic mode. 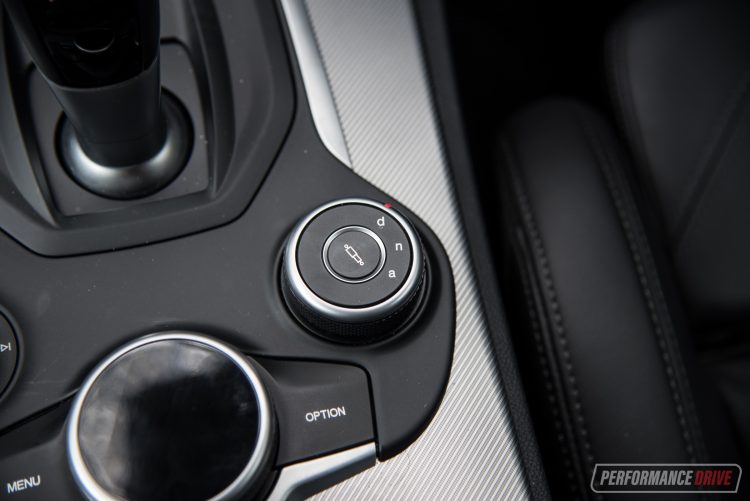 When it comes to performance and looks, Alfa’s first attempt in the SUV world has been beautifully executed with the new Stelvio. If you’re worried that the chic Italian looks and performance haven’t been carried over from the brand’s roots, don’t be. However, consumers are opting for SUVs because of their practicality, and we feel the Stelvio does fall behind in some areas here. More storage solutions and a slightly more sensible interior layout would go a long way to ticking those all-important boxes for potential buyers.

In saying that, the Stelvio is definitely a more exclusive option compared with the common, often conservative and vanilla rivals. Most rivals can’t defeat the Stelvio for design and Euro flair, driving engagement, and even authentic European luxury. It all has a certain essence about it. We guess that’s what an Alfa Romeo is all about. And on that note, it is a genuine Alfa.