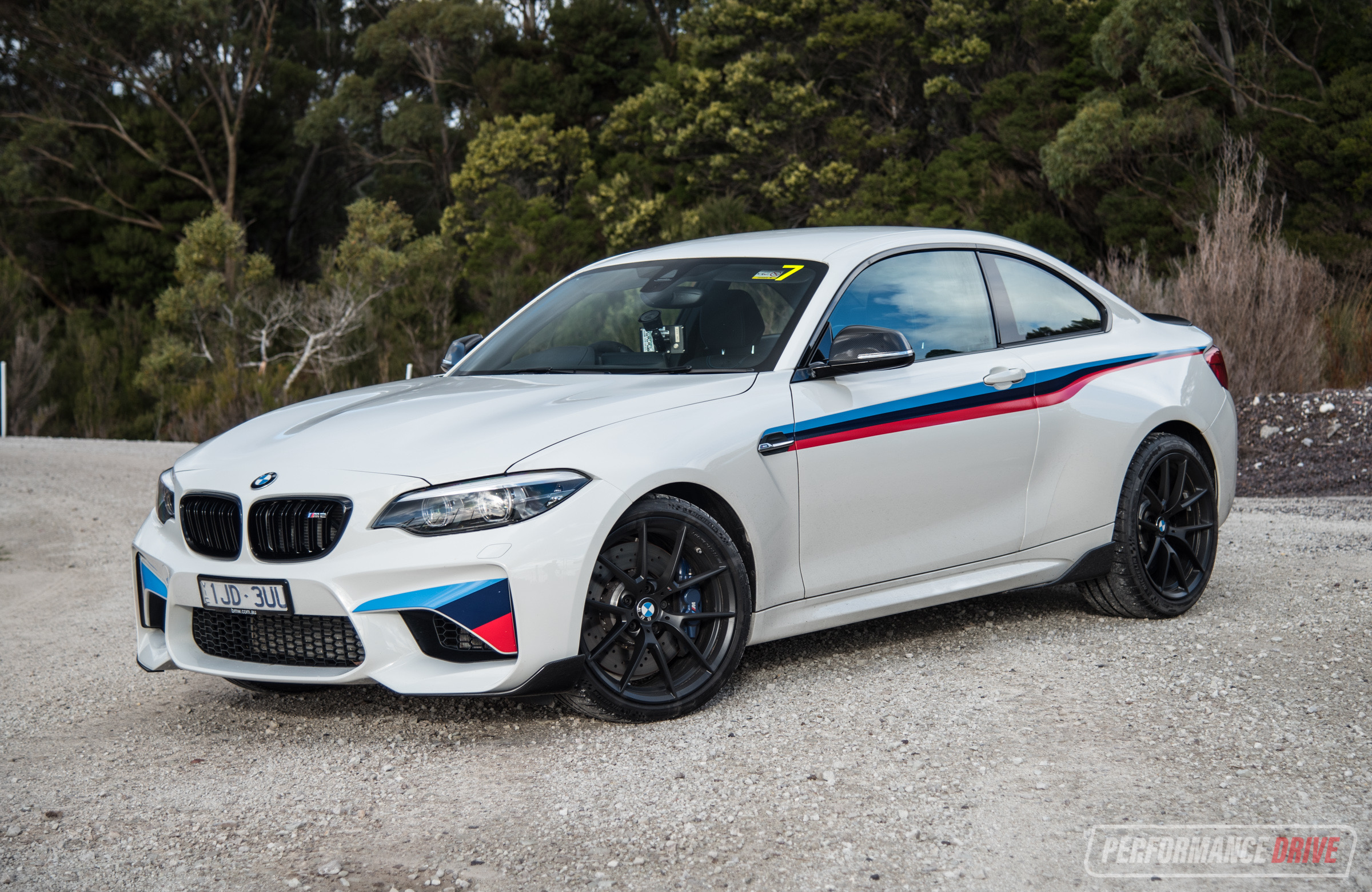 It’s been regarded as one of the best sports cars on the market, with many describing it as the best M car ever. We had the pleasure of testing the new 2018 BMW M2 (or 2017 M2 LCI, whatever you want to call it) on some awesome roads in Tasmania this week to see what all the fuss is about. 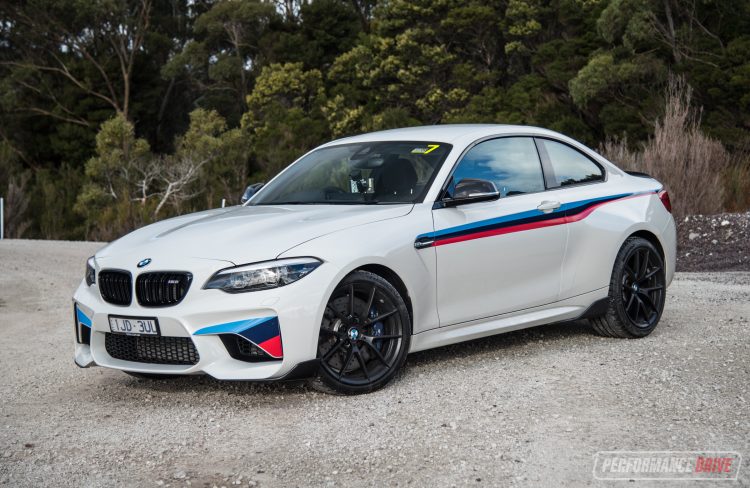 Before we get started, we’d just like to point out this white example pictured here is one special car. It was put together by BMW Australia’s communication team under instruction from CEO Marc Werner. This gives you some idea of the excitement the company (and company boss) has in its products.

They basically took the M Performance accessories catalogue and ticked every single box, including the box for the carbon fibre aero package, the irresistible 19-inch Y-spoke black light alloy wheels, and BMW Motorsport decals. As a bonus it is based on the ‘Pure’ variant which comes with a six-speed manual transmission. Needless to say, it will have every BMW M fan drooling. 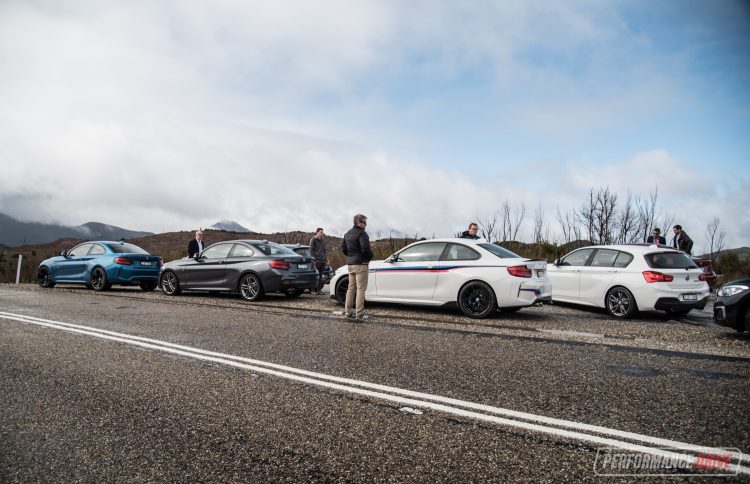 The launch event was held for the facelift updates for the 1 and 2 Series, including the M140i, M240i, and the M2. BMW calls it the LCI update, or Life Cycle Impulse, which is basically a mid-life update for the cars. It’s also the first update for the M2 since it was launched in Australia last year. For this specific review we’re concentrating on the M2 (M140i review coming soon).

What better place to test the M2 than on Targa Tasmania stages. This is, after all, the perfect environment for the car. With rolling hills, more bends than you could dream of, and plenty of adrenalin-inducing crests and galloping straights to really stretch the M2’s legs and experience its full capacity. 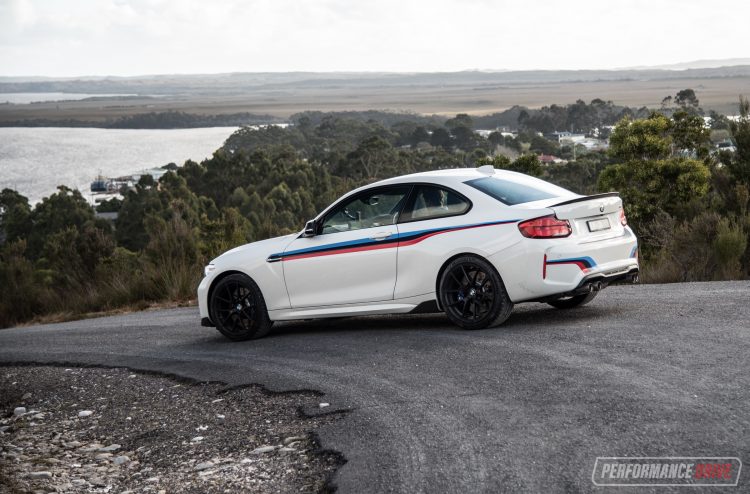 We started the two-day event in Hobart on the south-east coast, heading straight up through the guts via Hamilton and the London Lakes area, over to Strahan for our overnight stay. Through this region the scenery is beautiful. Very natural, tranquil, and, more importantly, mostly deserted. Perfect conditions for a spirited drive, then.

We’ve heard plenty of good things about the M2. Great things, in fact. It seems journos and driving enthusiasts just can’t get enough of it. And it seems local customers feel the same way. BMW Australia had to ask its German parents to send over more examples to fulfil local demand, with allocation lifted from 300 to 700, and then lifted again earlier this year.

Taking a seat in the strongly bolstered yet fully adjustable sports bucket seats, it’s easy to see why it is so popular. It’s clear from simply sitting down in it that this is a genuine driver’s car. The front seat sits low and in perfect alignment with the pedals and steering column. This masterfully-packaged test car also features a lovely M Performance steering wheel (which we stupidly forgot to take a photo of – sorry about that), featuring grippy Alcantara sections at the 9 o’clock and 3 o’clock grab points, helping to make the driver’s seat an even more desirable place. You want to sit here. And sit here for a long time. All day, if you can. 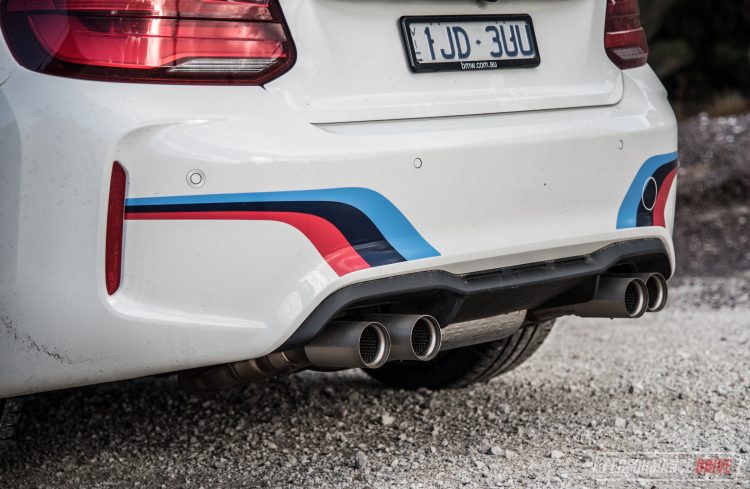 To create even more theatre when firing up the BMW-derived-but-M-fettled N55 3.0-litre turbo straight six engine, the team thought it would be a good idea to fit the M Performance bi-modal exhaust system with titanium tips. A good idea it is. On the remote-controlled exhaust valve button (yes, it is actually remote control so you can switch it open and closed while outside the car) it says the open setting is only for track use. However, getting into the spirit of Targa Tasmania we thought the neighbours wouldn’t care if we left it open for our drive.

In this setting the engine sound makes you moan noises you usually utter in the bedroom. It is such a great soundtrack. It has that classic inline six whir at idle, turning into a goosebump-inducing howl through the mid-range, and topping out with a proper six-cylinder scream when you keep your boot in it. Obviously noise isn’t everything but we think a good exhaust note can have a major influence on an overall driving experience of a car.

The engine redline isn’t as high as older BMW M cars, hitting its peak 272kW power output at a pretty low (for an M car) 6500rpm. You can keep it spinning until 7000rpm if you want to. But unlike the old M cars, the M2 is turbocharged and thus doesn’t need to be revved to oblivion to achieve speed. Importantly though, you still can if you want to. This thing has a really strong mid-range as well as top end.

Peak torque of 465Nm is available from just off idle at 1400rpm and is held all the way to 5560rpm. This kind of breadth is extremely rare in a six-cylinder, and it just could not have been achieved without some kind of forced induction. So although some fans might be upset by BMW’s decision to go turbo, the real-world driving benefits far outweigh any heritage deficiencies in our opinion. 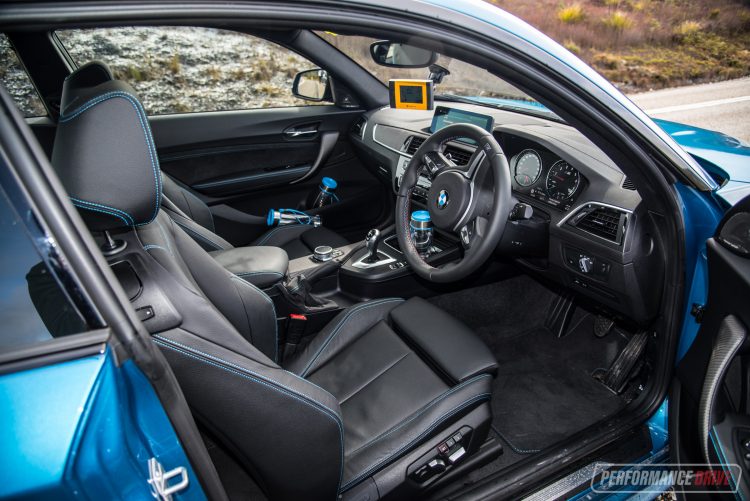 Out on the road, the first gear ratio is nicely spaced. It’s not too short or snappy but it doesn’t go on for too long like in some rivals. This means you can rev it right out and second gear will land you back in the middle, meaty section of the rev range. Or, you can short shift if you’re just cruising and the low-end torque will effortlessly gather you up to the second ratio speed. And it’s like this with every gear. Cross country performance and indeed driving enjoyment, purely through the gearbox, enhances the overall driving experience.

So now you have the sound, the power and the revs, the wide spread of torque, and the right ratios. All that’s left is the handling and steering. And again, the engineers at BMW M have managed to create a setup that is super-engaging and capable, yet compliant and reasonably comfortable for public road conditions. On the optional Michelin Pilot Sport Cup 2 tyres, in the wet, it’s easy to be afraid to switch off the stability control. But we thought we’d brave the conditions and have a little faith in the M2, and switch it all off. Doing this also turns off the automatic rev-matching function during downchanges, which we think deserves a separate off button anyway.

Even when the grip is low the car is very predictable. Around tight bends in second gear the front end bites hard, especially when the tyres are nice and warm, and the back end stays planted and stable even when it is drifting. You can use fine throttle adjustments to manage your drifting angle, and hold it at any angle you like by leaving your foot at any given degree of throttle depression. Gliding the car around corners in this way might seem like you’re wasting away forward progression to wheelspin, but that’s not necessarily the case. 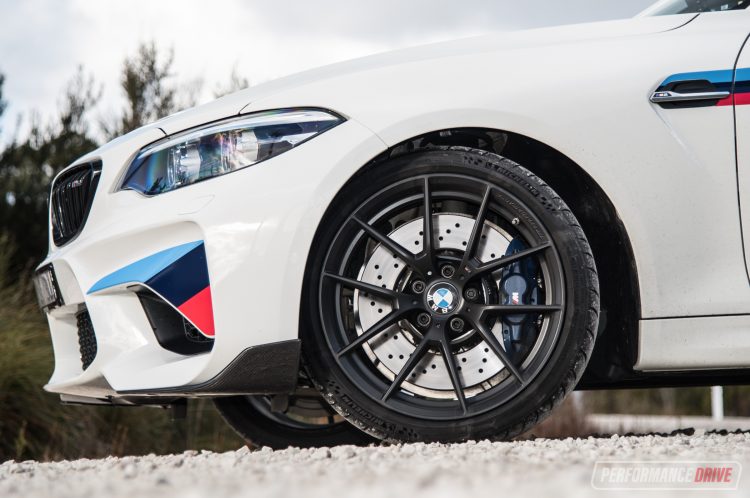 Even with the rear tyres spinning the M2 achieves really impressive acceleration. Across the 0-100km/h sprint BMW says it will stop the clock in 4.5 seconds (4.3 with the dual-clutch auto) in the dry. With the outstanding Michelins it feels every bit that quick.

Imagine coming out of a bend a little too hot on the gas with the back end out, feeding more and more power in as it straightens up, at which point you’re enjoying 6000rpm of six-cylinder wail. It will do it. You don’t have to imagine it. It will do what you want it to do. And that’s what we like most about the M2. You get the sense it is your driving friend. It likes driving as much as you do, and it feels right behind your every move. No car in this segment (or others, frankly) is able to showcase such a perfect blend of confidence, balance and joy quite like the M2.

Prices start at $93,900 for the Pure, and $99,900 for the slightly more luxe M2 with a manual or seven-speed dual-clutch auto. We’re saving up. If you’re in the market for a neat little driver’s car with excellent levels of luxury and quality, and thoroughly thought out driving dynamics, you definitely need to consider one of these.

We were planning to do a point-of-view test drive video for you but the supplied photography crew took us down to a unique location that turned out to be closed. So unfortunately all we had time for was this very brief engine sound and 0-100km/h (not timed) video for you. We hope it gives you some taste of the fascination. We are aiming to put together a more in-depth review for you in the near future, and we’ll include our usual videos.