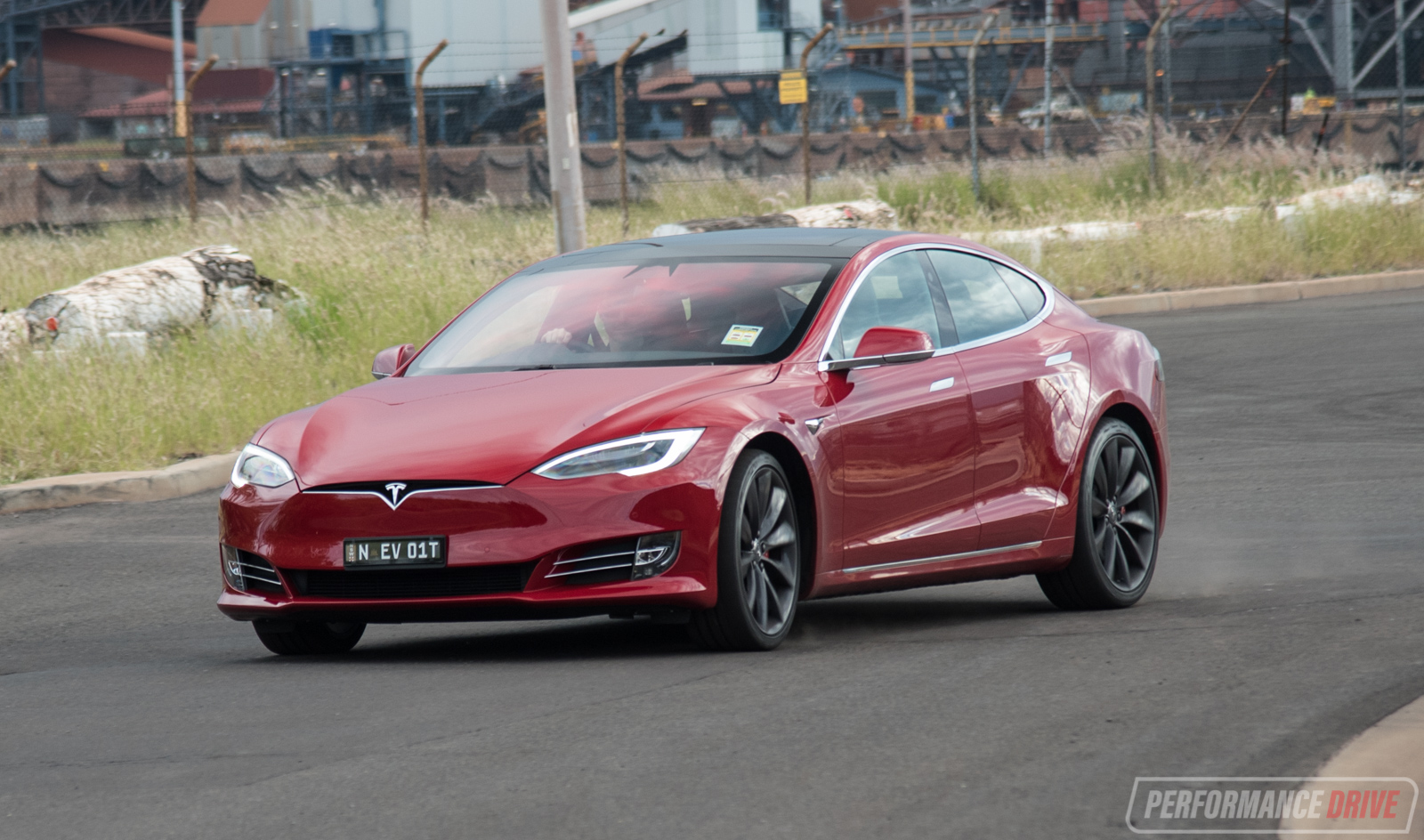 Looking for the quickest and most powerful production sedan on the market? Don’t bother looking at the macho German sedans. Gaze your view over this way. This is the Tesla Model S P100D. It not only holds the titles mentioned above, it’s also the most efficient and the most amazing sedan on the market. 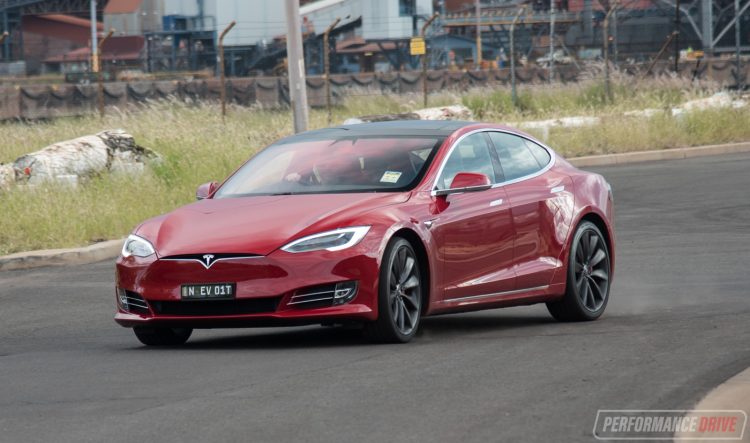 Tesla introduces its model updates a bit differently to the way most manufacturers do it. Since this is a technology-packed car it’s more about updating the software and hardware. The flagship P100D replaces the P90D, featuring a larger-capacity battery pack. Instead of 90kWh, it’s now, you guessed it, 100kWh. This is potent enough to send around 580kW and 1250Nm to all four wheels, via two electric motors.

If this is too powerful for your needs – and it probably is for most peoples’ needs – Tesla does offer smaller-capacity versions, ranging from 75kWh to 90kW. The naming structure means that if there’s a ‘D’ at the end, like 90D, it’s dual motor (AWD), and if there’s a ‘P’ at the beginning, it means performance.

Being the top model, the P100D is quite expensive. Prices start at around $264,000 before options (depending on state and government incentives), with this as-tested version retailing from around $300,000 with some options. As you can see, being this fast and fuel-free doesn’t come cheap. Punters should look forward to the upcoming Model 3 though which is going to be a lot more affordable. 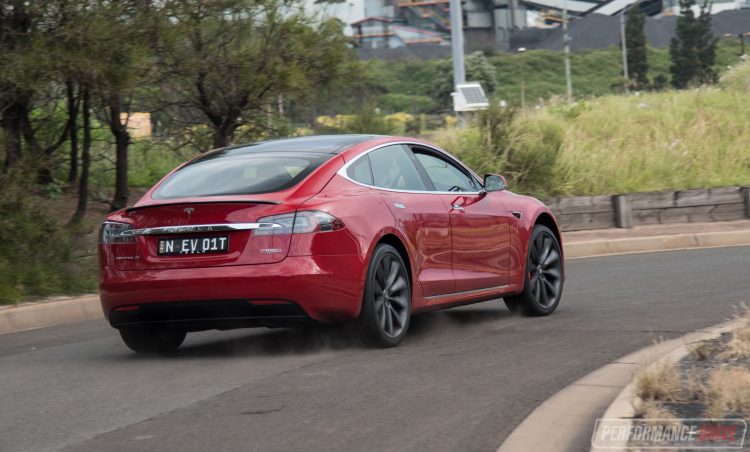 Aside from being the most powerful and all that, the latest P100D also showcases the latest facelift and updates for the Model S. At the front the pointed and thinner grille is the most obvious change, giving it a sharper look out on the road. It makes the car look more like a thing of the future too, but in our opinion it does have a whiff of Chinese car about it.

Some minor changes have been made inside. Although minor, they are hugely welcome. Unlike before the centre console is now a proper console, featuring divides, adjustable cup holders, and a retractable lid to keep those more sensitive items private from prying eyes. It doesn’t seem like much but just this console alone seems to make the cabin more of a home rather than a pretty bare transportation capsule. 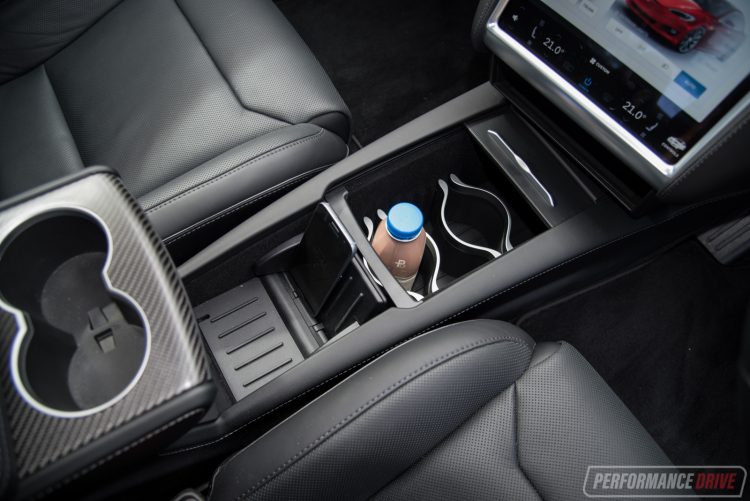 Being bare can be a good thing though. If size matters then the Model S cabin will fit your bill perfectly. There’s heaps of room inside, more than any rival. Legroom, headroom, shoulder space and footwell space is unrivalled. Even in the back. This is helped by the clever packaging and chassis design, which sees all of the batteries mounted within the platform like a sandwich. The motors are placed at the front and rear axle, leaving plenty of space for the cabin in the middle, including a dead-flat floor in the back. You simply won’t get this much cabin space in any other sedan. Likewise with boot space, with a dual-level rear boot and additional cargo area under the bonnet in the front.

No other major changes are made to the interior. However, since most of the interior controls and functions are housed within the industry-leading touch-screen interface, you won’t be surprised to hear updates have been made to it. Google Maps are updated and some of the media-streaming capability has been improved. 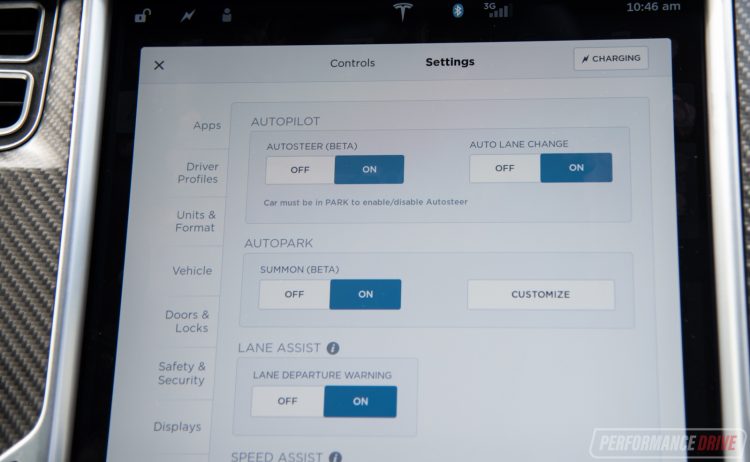 Autopilot functionality is also moving along, with the Enhanced Autopilot just around the corner in Australia. Tesla is still collecting data and fine-tuning the hands-free driving technology, so, unfortunately, we weren’t able to test the Autopilot feature. It is still in beta mode, but Tesla is aiming to allow full media reviews in the near future.

As with the Model X we tested recently, we did notice some areas of the build quality that lacked attention to detail. It might be nitpicking but we noticed some of the panel gaps and trimming alignments aren’t faultless on this test car. And for a product of this price, we think they really should be. Tesla has only been making cars for a short period so we expect this will improve in the coming years.

As a luxury car, the Model S is serenely quiet and smooth along the road. There’s no engine to start or idle, so it is completely silent at the traffic lights. Even at highway speeds very little noise is sent through to the cabin. You get a faint whine from the electric motors and a bit of road roar, but that’s it.

Ride comfort is also excellent, particularly for a performance car. Tesla’s air suspension with its adjustable ride heights soaks up imperfections in the road like a dream. However, the optional 21-inch alloy wheels as fitted to this test car probably aren’t the best choice for finer bumps. Road connections and smaller pockmarks can ricochet through the low-profile tyres and into the cabin. But, again, remembering this is the ‘P’ 100D, the ride is superior compared with the equivalent German rivals.

For this test drive Tesla urged us not to do our usual performance testing with this particular car. It says it will be giving us another car to do performance tests with though, so it will be interesting to see what sort of 0-100km/h times we can get out of it in the real world. Tesla claims the sprint takes just 2.7 seconds. 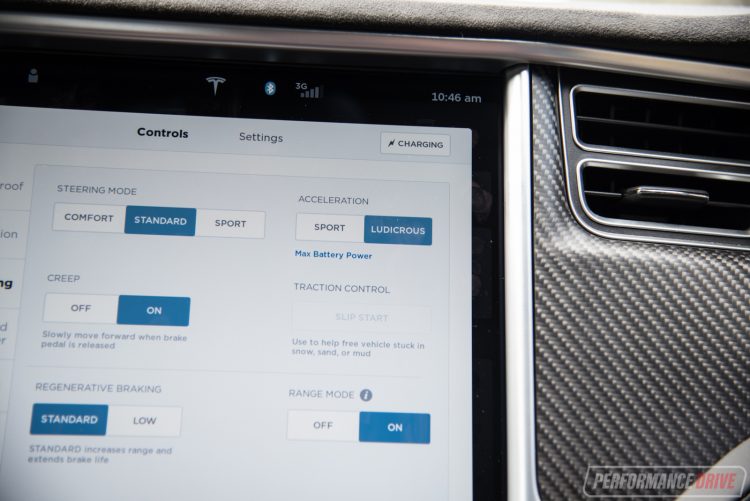 Out on the road it definitely feels quick when the famous Ludicrous mode is selected. The sheer immediacy of the throttle response and sudden speed will shock you and any passengers, every time. You just don’t get used to it, it’s that astonishing. Pedal movement translates to instant response. The more you move the pedal, the faster the car goes. It’s quite surreal.

Around the bends the Model S is extremely flat. All of the batteries are sandwiched in the chassis, which means the centre of gravity is very low. Body roll is essentially non-existent, leaving a responsive and relatively agile handler. Where it falls behind the rivals (the performance rivals anyway) is with steering feel, in our opinion. It’s a bit, for the lack of a better word, ‘Volkswagen’. There are three modes – comfort, normal, sport – but all these only change the weight rather than the engagement. 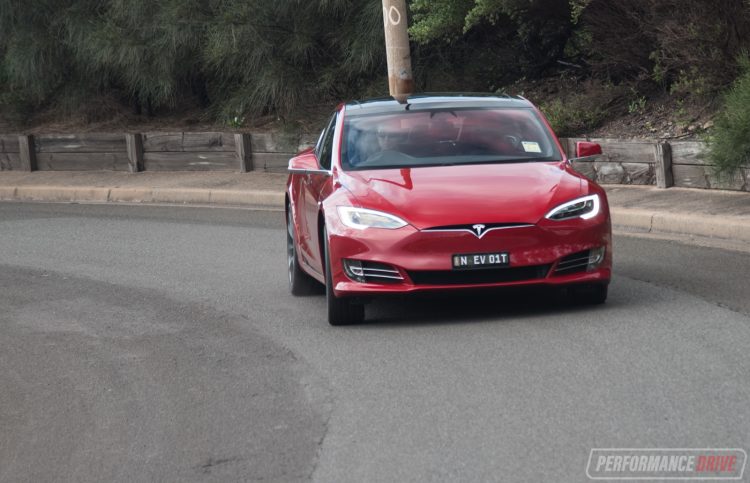 Information about what the wheels and tyres are doing feels like it is sent via a formal transcript as opposed to an interactive virtual-reality suit. The capability is definitely there, with relentless road-holding and grip, but the enjoyment through the steering wheel isn’t. And with a vehicle that tips the scales at just over 2200kg, shifting that weight from left and right can make you a little nervous as you’re not completely sure how the tyres are coping. Although, they do cope. Very well. During our vigorous mountain road test we encountered no understeer or oversteer, showing Tesla’s genius despite holding very few years experience in building sports sedans.

A lot of this is down to the all-wheel drive system. It allows you to apply loads of throttle from the apex of a corner, with absolutely no wheelspin to inhibit its ability to catapult from corners. Pair that with the instant acceleration and you’ve got yourself a serious weapon up a nice mountain route.

Fortunately, braking performance is in balance with the acceleration performance. Big multi-piston Brembo calipers grasp for the front end and clamp the car down like an anchor. We weren’t allowed to do performance testing as mentioned, but after a stern test drive there was no fade or pedal drop to report. 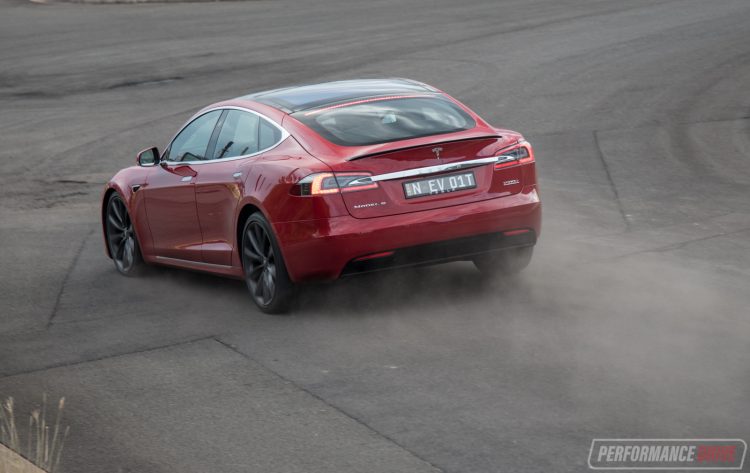 Speed, power, and tranquility. That’s what the P100D is about. The sheer shock value, the juxtaposition of being so quiet and kind to the environment yet offering terrifying, almost violent acceleration is the stuff dreams are made of. Being the quickest in a straight line has big bragging rights, but in the corners it’s perhaps not as engaging or fun than some of the nearest rivals.

As a luxury sedan, it’s great. The touch-screen is easily the best in the industry, and not just because of the size but also the connectivity and usability, while the silence and calmness during normal driving is unparalleled. If you think all of this sums up to the starting price, then you’ll be more than pleased to jump into this technological marvel.

CONS:
– Build quality/fit and finish in some areas
– Numb steering (for a performance sedan)
– Price