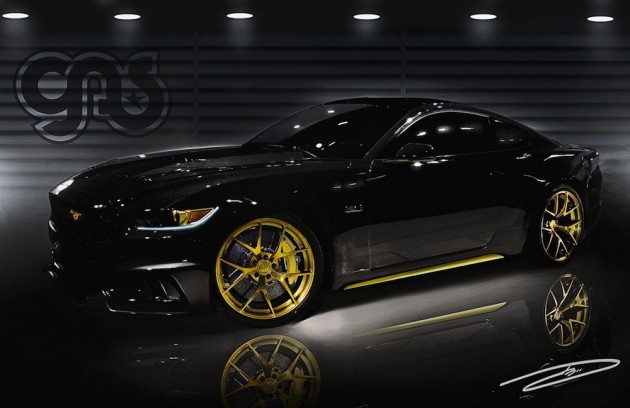 To pay tribute to the Mustang’s ‘golden anniversary’, the coupe will wear black and gold flake paintwork. Other exterior upgrades include a new front fascia, front carbon fibre splitter, new side skirts, custom headlights with LED lighting, a chunkier rear diffuser, and a bespoke transparent bonnet.

The interior has also received a some special touches such as a black suede roof lining and gold Recaro sports seats. Bringing the Mustang closer to the ground is a new sports suspension setup, and filling the guards are aftermarket 20-inch wheels that have also been given a gold finish.

The Mustang GT comes with a 324kW 5.0-litre V8 as standard, however, Galpin Auto Sports has fitted up a Whipple supercharger and bolted up a Magnaflow exhaust system. As a result power jumps up 216kW to 540kW in total – more than enough to keep the majority of its competition at bay.

Fans of the hero pony car here in Australia only have to wait until the middle of 2015 to get their hands on the new Mustang. The arrival of the Mustang in 2015 marks the first time the V8 Ford coupe has ever been sold in Australia as a genuine factory-built right-hand drive vehicle.

Reports are suggesting prices for the two 2015 Ford Mustang models on offer (only the EcoBoost and V8 GT models) likely to kick off at around $50,000. If you’re keen on owning one, we suggest you talk to your local Ford dealer now because more than 13,000 Australian Mustang fans have already registered interest in the American muscle car.