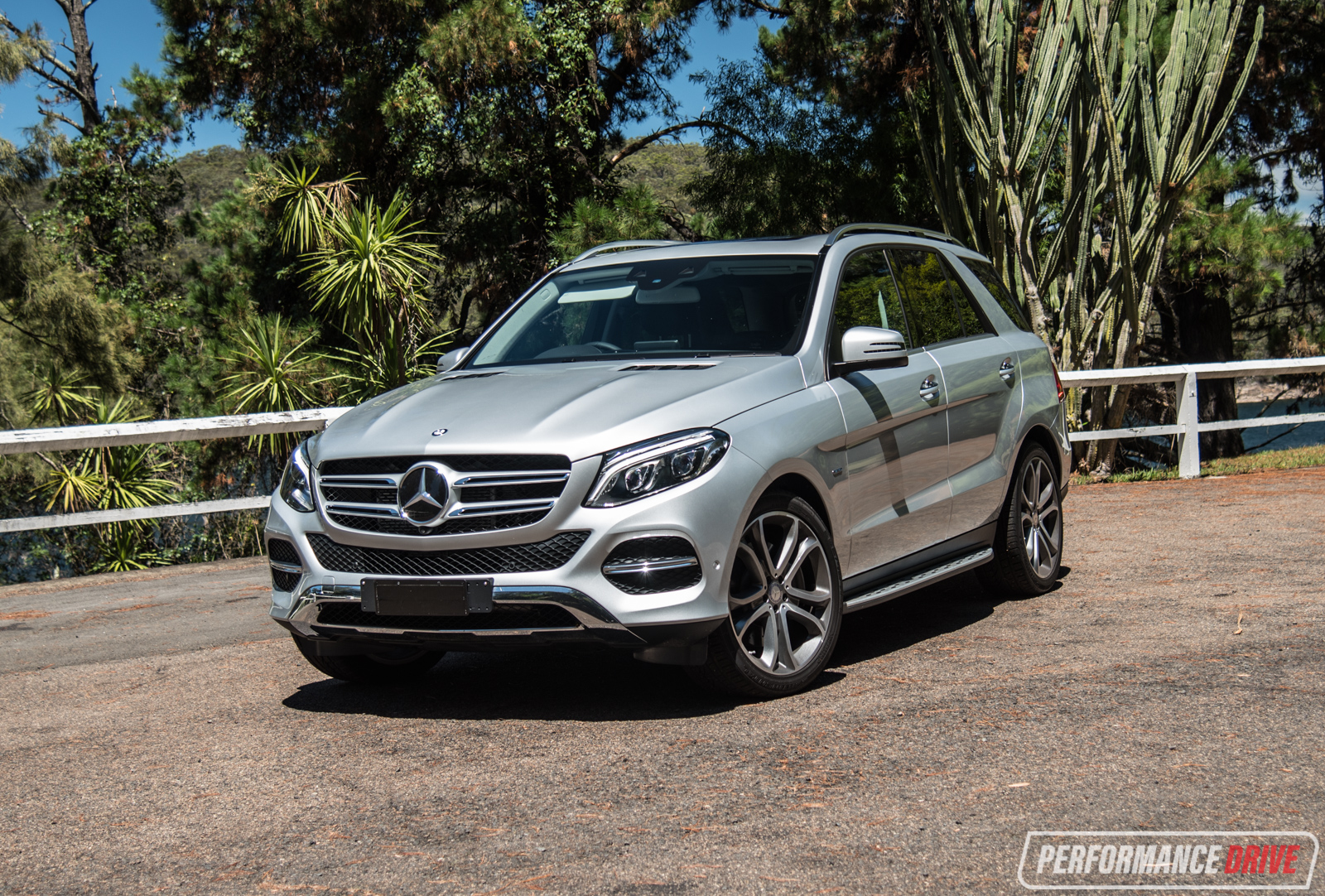 How many large luxury SUVs are on the market at the moment that use less petrol than a Toyota Prius? We bet you didn’t know there are actually four to choose from, including this, the Mercedes-Benz GLE 500e. 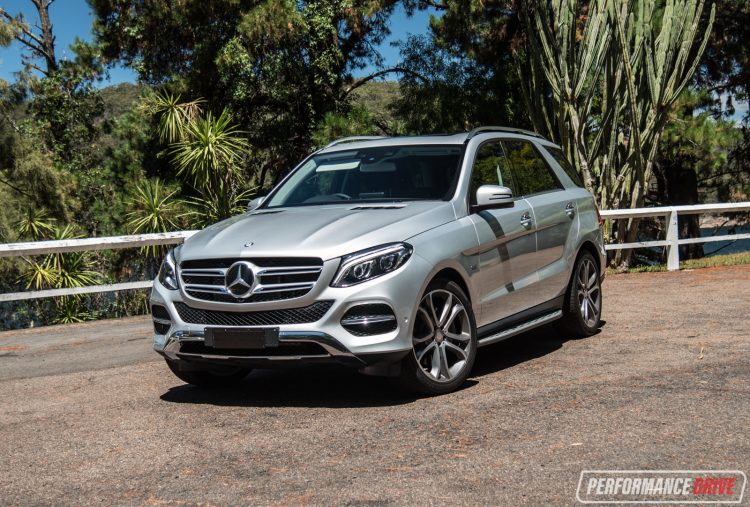 It’s unbelievable that you can buy a large SUV these days with an official average consumption lower than 3.5L/100km, and that’s excluding the all-electric Tesla Model X – but it’s not really an SUV. You have this GLE 500e (3.3L/100km), the BMW X5 xDrive40e hybrid (3.4L/100km), the Porsche Cayenne S E-Hybrid (3.4L/100km), and the Volvo XC90 T8 hybrid (2.1L/100km). In other words, there are plenty of options around if you dare to look. But we assume most buyers (in Australia) are not actively going out to find a hybrid. And we put this squarely down to poor marketing by the manufacturers.

The GLE 500e, like most of the others, has slipped into the local market discreetly and relatively unnoticed. But we can’t figure out why more people (including Mercedes) aren’t making a big deal about it. You get the benefits of a hybrid and the performance of a very high spec variant. You see, the GLE 500e comes with Mercedes’s latest 3.0-litre twin-turbo V6 that churns out 245kW alone. It’s a sweet engine. Add an 85kW electric motor and you’re left with a proper gut-churningly powerful 325kW and 650Nm beast. It’s incredible.

Prices for the 500e start at $124,900, slotting it in about the middle of the GLE range. That’s pretty good considering the level of technology that’s packed in here. It’s also competitively priced against the aforementioned rivals, which start at around $120,000, except for the Porsche that kicks off from about $137k (all excluding on-road costs). So, what’s the catch? 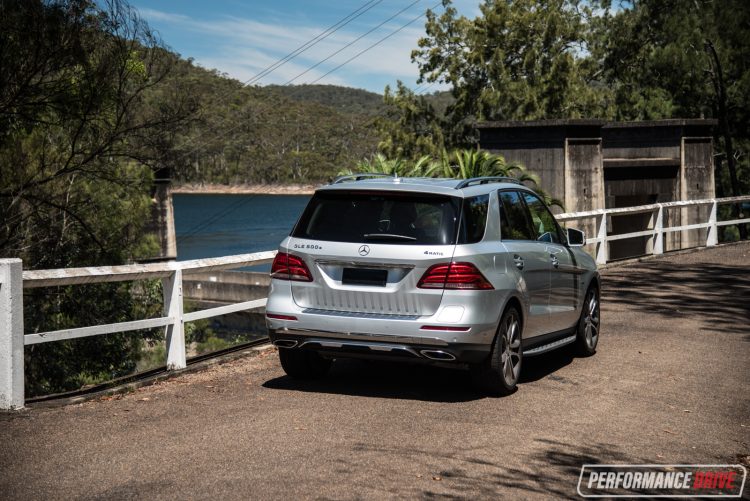 Underneath, the GLE is based on the old ML-Class. The platform is the result of a previous partnership Daimler (Mercedes parent) held with Chrysler, and was actually introduced back in 2007. The platform is shared with the current Jeep Grand Cherokee, although Mercedes has made some extensive revisions and added its own suspension and so on. Even still, this platform is starting to show its age. More on that later.

Being placed in about the middle of the GLE range, the 500e comes generously equipped. For the passengers there’s some comfy leather chairs with ventilation for the front, along with a multimedia LCD interface controlled by the company’s latest hand wheel down on the console. Sounds are sent through a 14-speaker stereo, and you can option for an even more impressive 15-speaker Bang & Olufsen unit for out-of-this-world clarity and bass. 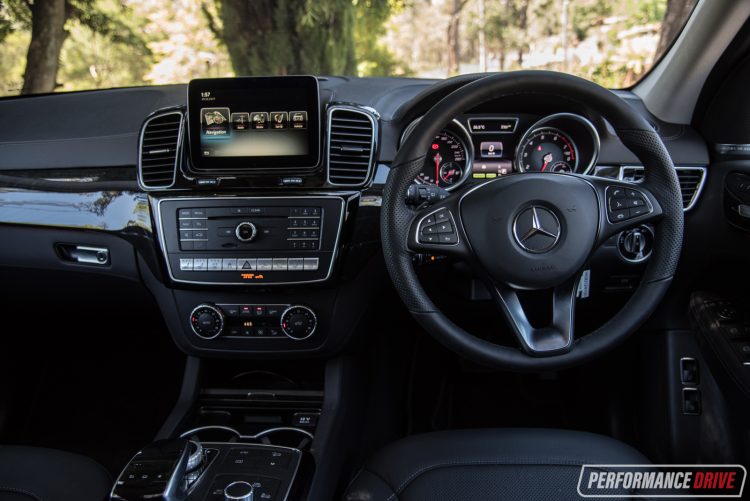 We like the hand controller pad down on the console, as these types of systems tend to be safer than conventional touch-screen setups. Once you get used to how the wheel and menus work, which doesn’t take very long in the GLE, you merely glance over at the screen to make selections. With touch-screens you often spend far too long lining up your finger to ensure you’re making the right selection, with less focus on the road.

About the only area of this that we feel needs some attention is the screen and the way it stands by itself against the somewhat old-school dash design, with its square buttons and primitive telephone-pad layout. It can seem a stark contrast purely in terms of contemporary design symmetry going from the LCD screen to the lower controls, perhaps reflecting the GLE is still in transition from the old ML.

Cabin space is commendable, with good vision outside for all passengers. The external proportions are easy to judge from a driver’s point of view, while a 360-degree parking camera adds further reassurance. Most surfaces inside are covered in leather and feel premium, aside from a few tacky plastic trimmings, such as the silver rings that surround the instrument cluster that feel like they are going to fall off, and some of the older buttons and rotary controls for the climate as mentioned. We’ve always felt that Mercedes has lost its quality leadership it once held in the ’70s and ’80s, and the GLE, in some areas, seems to perpetuate that notion.

Cargo space is hindered by the hybrid technology, with the floor raised up to occupy the batteries and electric drive. It’s rated at 480 litres, expandable to 1800 litres. This is down on the standard GLE’s 690L/2010L volume. However, it is capacious enough to take on the weekly shopping or an assortment of luggage pieces. The width is what helps to retain a decent level of usability, but those frequently storing and carting taller objects will find the hybrid packaging an issue. 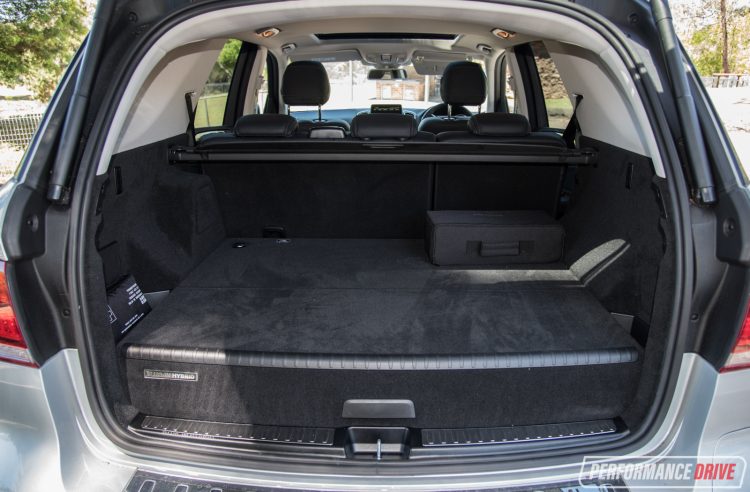 Onto the most impressive part of this vehicle; the powertrain and sheer driving technology. As standard the 500e gets the company’s iconic air suspension with height adjustable modes, along with an advanced active cornering function that bolsters each side of the vehicle depending on the direction turned to minimise body roll. There’s also a very clever Distronic Plus cruise control system with auto steering control. Yes, you can drive with your hands off the wheel, although a warning will sound after about 15 seconds as it is not designed to (or legally allowed to) drive completely autonomously. 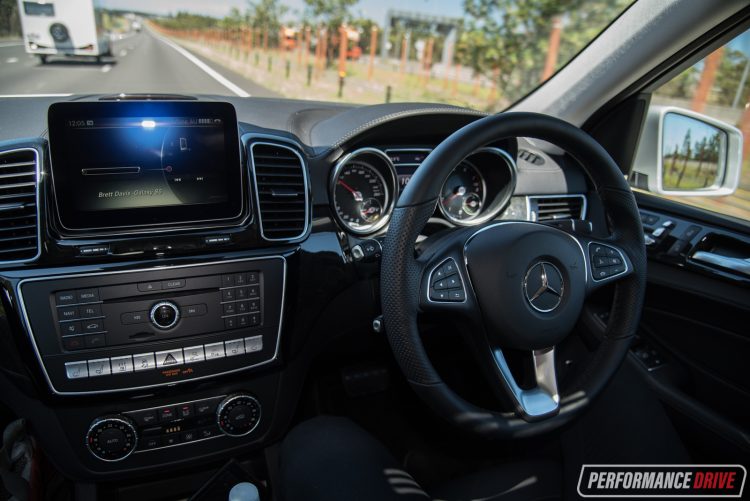 In our opinion, this cruise control tech is one of the better systems out there. It seems to read the traffic more frequently and more comprehensively, and it feels like it understands what is going on in front of you more so than other systems out there. The steering assist system is only an assist, so it’s not designed to completely take control. Therefor it will bounce around in the lanes a little bit. Maintaining a set distance between you and the car in front is where it shines, as it won’t annoyingly brake the car when there is no need like some adaptive cruise systems.

As for the air suspension and body roll defence, in sport mode the body does firm up and try to hide any lean, quite effectively. But it doesn’t hide the fact the 500e tips the scales at over 2500kg. It feels heavy. Down a tight twisty road the 500e can become uncomfortable as it tries to defy the laws of physics. It doesn’t like changing direction too quickly, and if you insist, there is some delay in body control and response to contend with.

Steering feel is nice though, with plenty of communication coming through so you always know what the tyres and suspension are doing. Fortunately, it is still a German vehicle at heart too, which means straight-line stability is exceptional. Other manufacturers struggle to replicate the on-road confidence of a German vehicle, and the same can be said for the GLE. On open roads, even around long sweeping bends, the GLE is rock-solid and feels unquestionably safe and surefooted. 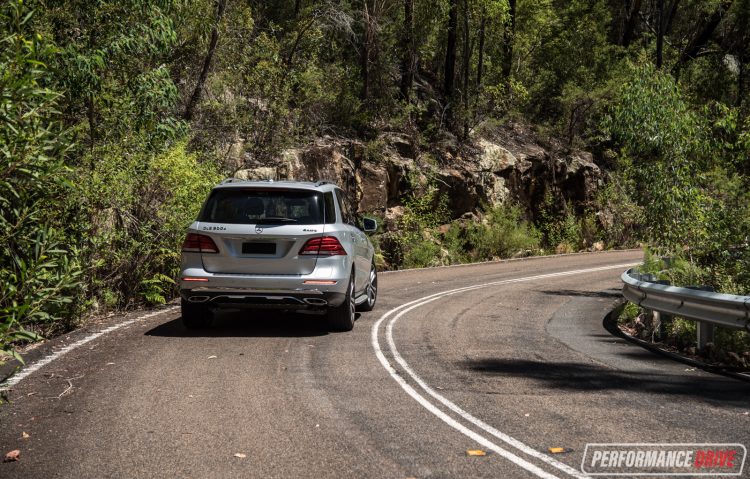 If you’re worried about performance, because it’s a hybrid, don’t be. This thing really hauls. There’s no lag or delay low down in the rev range thanks to the instant torque of the electric motor, and from there the superb twin-turbo V6 just keeps singing and propelling the GLE along. We timed 0-100km/h in a very swift 5.63 seconds (in pretty hot conditions), with Mercedes claiming 5.3 seconds. Keep it pinned and it’ll cross the quarter mile in just 13.8 seconds, which is a properly quick time, especially for a large luxury SUV. You can forgot any preconceptions you might have about the performance of hybrid vehicles, because this 500e is definitely capable of putting a grin on your face.

It’s not just the momentum of building speed that’s impressive. Mercedes has, thankfully, chosen to stick a seven-speed automatic behind the engine and hybrid tech. It’s not a boring CVT like what you get in many hybrid vehicles. This means you can change gear with the paddle shifters just like you would in a sports car. You also get the rewarding experience of feeling the engine revs climb and drop as it powers up through the gears – not something you get with a CVT.

In the end, if you’re considering a hybrid you’re interested in fuel efficiency. And this is where 500e just stands well ahead of any other variant in the range. You may have noticed there is a subtle badge on the side that says ‘plug-in hybrid’. This means you can plug the vehicle in to charge the batteries. On a full charge, Mercedes claims you can drive on electric power alone for around 30km (speeds up to 130km/h).

We didn’t get a chance to test this but we’ll take its word. Essentially, you could drive to work and back home, all week, and never have to visit the petrol station. If you live within 30km that is. You won’t be burdened by range anxiety either as the petrol engine will fire up seamlessly, when needed. We also, inadvertently, figured out you can actually charge the battery by simply sitting at idle. We wouldn’t recommend this though as you’d probably go through a quarter of a tank of fuel to recharge it, defeating the purpose.

Aussie buyers may remain skeptical about hybrid technology, but the fact of the matter is this is more fuel efficient and more powerful than any diesel or petrol non-AMG GLE model. The performance is what attracts us the most. It really does shift like a train. And with the added benefit of being able to drive on electric power alone, it is the most logical variant to go for we think. If Mercedes-Benz had a better marketing department in Australia we’re sure more buyers would be jumping on board.

CONS:
– Ageing platform; not as dynamic as most rivals, very heavy
– Some brittle interior trimmings
– Same design from 2011

As always, if you’re thinking about buying a new car don’t forget to click here to speak with our car buying specialists.  We may be able to get you a good deal through our friends at Mercedes-Benz Hornsby.