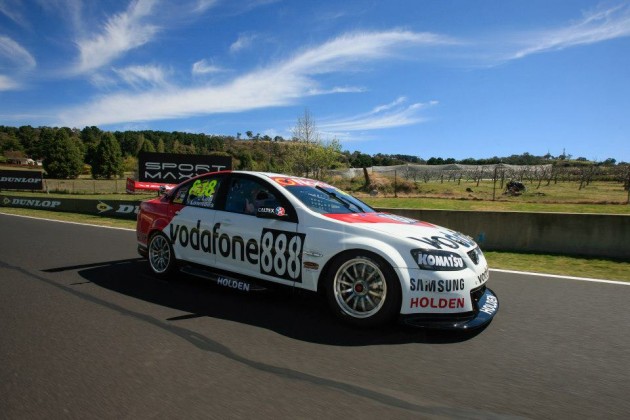 As previously reported, many cars running in this year’s race will be wearing special colours in celebration of the 50th anniversary of the famous Bathurst race.

The new colours for TeamVodafone were unveiled today in front of a packed crowd at Brock’s Skyline, Mt Panorama, where TeamVodafone spectacularly lifted the car in via helicopter. Craig Lowndes and Bev Brock, the late Peter’s partner, were also on hand for the reveal.

Lowndes was naturally pumped to have his car and his race suit resemble his hero.

“I’m excited because obviously I grew up watching Brock drive and this was one of my favourite car designs – to have it recreated on my own car is a huge honour,” said Lowndes.

“Driving the car back down the Mountain alongside Bev today was a very emotional moment and stirred memories of 2006, in particular.

“This event marking the 50th Year Anniversary of Bathurst is a big milestone for the category and it is fantastic to be part of the many celebrations.”

Bev Brock said she was proud of the tribute to her late partner.

“I’m sure that Peter would be so honoured to see this memory in Craig’s very capable hands, I strongly share that point of view,” Brock said.

“There is no one else who has taken up the mantle like Craig has, he is exemplary on and off the track and he represents everything Peter stood for. I’m extremely proud of him and proud to be associated with this unveiling.

“I’m quite sure the crowd will be ecstatic whether they are Ford or Holden supporters, Peter held their respect. I’m certain they all will be extremely touched and it will bring back so many amazing memories for them all.”

Craig Lowndes’ car will be the only TeamVodafone V8 Holden to wear special livery for the race, with teammate Jamie Whincup’s car using its usual colours.

The panels from the car will be auctioned on TeamVodafone’s eBay page following the race. All proceeds will go to the Estate of Peter G Brock for distribution between Peter’s favourite charities.

Lowndes will share the driving duties with Warren Luff in car the #888 Commodore, with teammate Jamie Whincup to be joined again by Paul Dumbrell in car #1.

The TeamVodafone endurance lineup scored a 1-3 finish at the Dick Smith Sandown 500 in September, the traditional pre-cursor to the 1000km Mt Panorama marathon.

The ‘Great Race’ will take place this weekend, with the main event on Sunday.