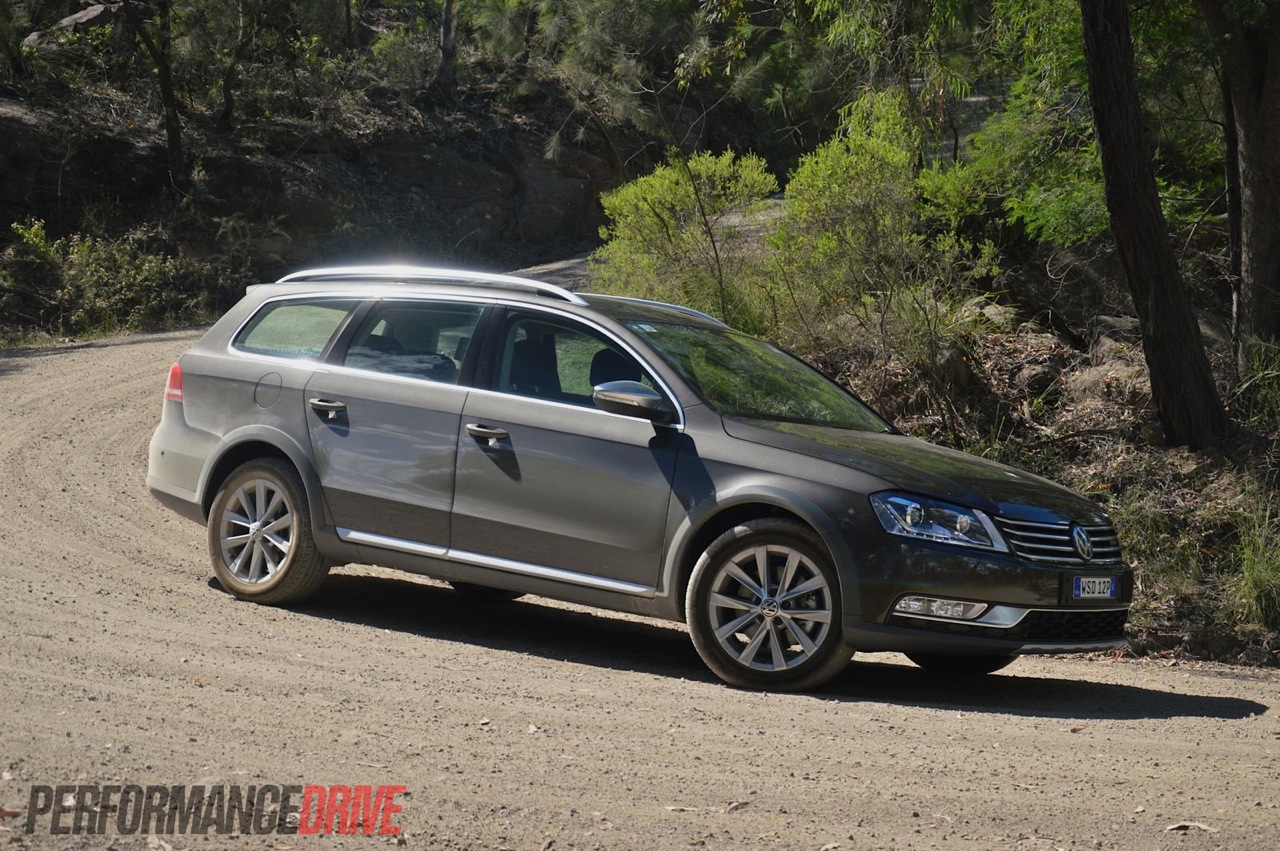 Closing the gap between the Touareg large SUV and the Tiguan small SUV, the 2013 Volkswagen Passat Alltrack slots in as the company’s only medium-sized off-roader. It comes packed with technology and convenience while offering adventurous semi-off-road capabilities. 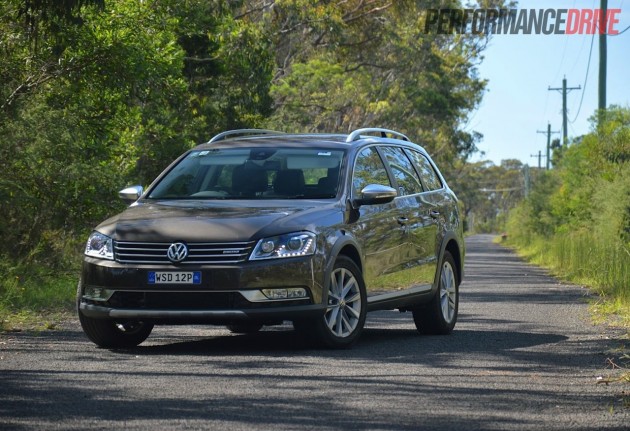 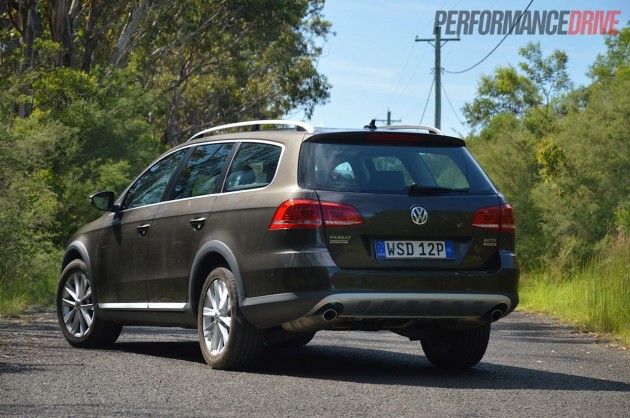 This is the first time Volkswagen is offering a jumped up version of the current Passat in Australia. Based on the Passat wagon, the Alltrack comes equipped with a full-time ‘4MOTION’ all-wheel drive system and a mildly raised suspension setup with 165mm ground clearance to suit light off-road duties.

It’s the ideal combination really, as it’s not so tall and heavy as to ruin on-tarmac handling, comfort and composure, but in Australia, especially in more rural areas, the Alltrack is handy when it comes to some dirt roads or slippery snowy conditions.

Under the bonnet the Alltrack can only be had in TDI form. It gets the 2.0-litre turbo-diesel four-cylinder unit found in the current Golf GTD and the regular Passat, producing 125kW of power and 350Nm of torque. We’ve experienced this engine in the Golf GTD and the Passat CC, but in the Alltrack it seems to be in its most refined and quietest form.

Prices start at $47,790 for the single model lineup, which makes it only marginally more expensive than its closest diesel rival and perhaps the pioneer of this segment, the Subaru Outback; from $37,490 up to $57,490 for the petrol. From $45,490 for the top-line diesel version. 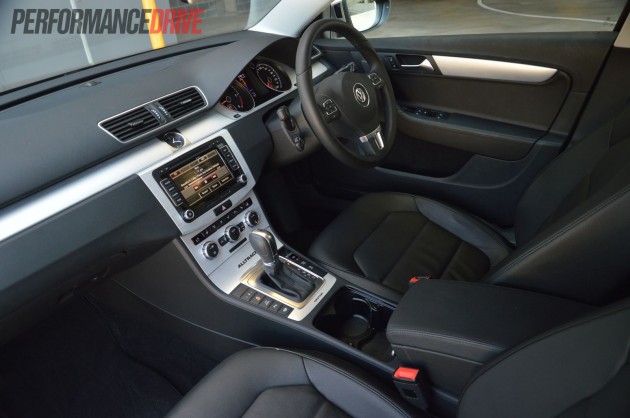 With the exact same dimensions as the regular Passat wagon in terms of length and width, the Alltrack offers plenty of cabin space for five passengers. Headroom and legroom is more than commendable in the front and the back, and the dash area and centre console never feels overwhelming or claustrophobic.

Seat comfort up front is good for long journeys, however, it would have been nice to see perhaps a touch more lateral support. The driver’s seat is electronically adjustable for the backrest angle, and both fronts feature manual lumbar adjustment.

Like pretty much all Volkswagens, the Alltrack dash and indeed the entire interior layout is very clean with no confusing array of buttons or settings to distract you. Those who enjoy simply sitting back and relaxing while they drive will feel very much at home in the Passat. 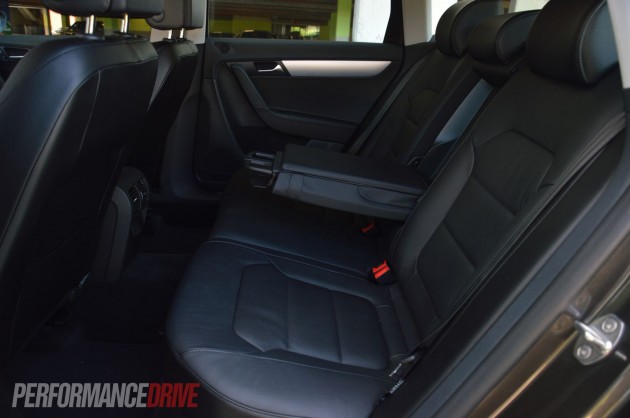 Rear seat passengers get a 12-volt power socket, cup holders, and a middle seat backrest which can be opened up to provide a ski portal into the cargo area.

The cargo area itself offers 588 litres of space, or if you fold down the rear seats, which can be done in one quick flick of a lever in the cargo area, up to 1716 litres is opened up. Enhancing convenience even further is a fully electric tailgate. 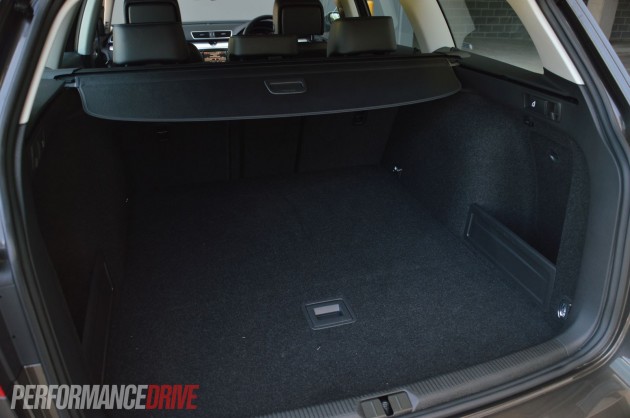 In Australia, the Alltrack comes standard with VW’s 4MOTION all-wheel drive system which uses an electro-hydraulic coupling for the rear wheels. In most conditions around 10 per cent of torque is delivered to the rear wheels to save fuel, however, if the conditions are demanding enough, more torque is directed, automatically, while on the go.

Engine speed does not need to build to activate the coupling, in other words, it senses grip levels before the front wheels start to spin and cause the engine to rev.

Creature comforts such as automatic headlights, auto wipers, one-touch power windows, parking sensors with a reverse parking camera, multiple cup holders front and rear, and a button/electric handbrake are of course all standard as well. 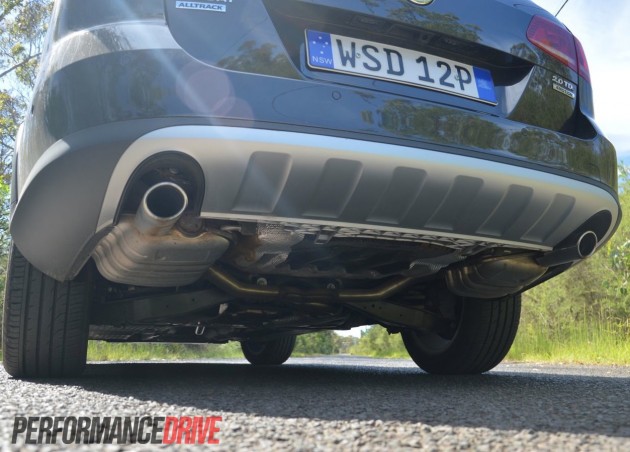 It doesn’t exactly cry out ‘swinging bachelor inside’, the Alltrack, but it is a smart design. Volkswagen’s inherent conservative approach to styling is applied to the semi-SUV, with various silver and grey highlights, including the wheel arches, giving it that tougher ready-to-go adventurous attitude.

The level of safety systems that can be fitted to the Alltrack brings the Passat to pretty much where the Mercedes-Benz S-Class was just a few years ago.

There’s an optional and highly recommended Lane Assist system, which is capable of gently turning the steering wheel to guide the car within the lane, City Emergency Braking which is capable of automatically applying the brakes if it detects a stationary or significantly slower-moving object in front of you, as well as a very good radar-guided cruise control system which is capable of bringing the car to a complete stop. 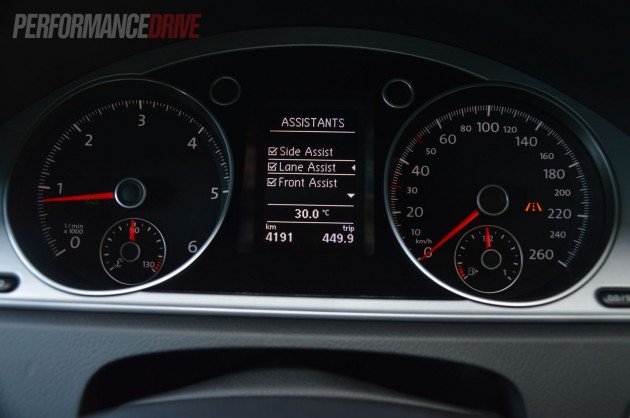 All these system might seem like a mouthful, however, once you become accustomed to them, you’ll be wondering how you ever lived without them. The radar-guided cruise control is especially good if you’re a frequent highway driver. It offers distance adjustability between you and the car in front, and, as mentioned, it can bring the car to a dead stop at the lights if need be.

Australia’s ANCAP hasn’t specifically tested the Passat Alltrack, but it has awarded the regular Passat the full five stars. The Alltrack comes standard with eight airbags, traction and stability control, and fatigue-detection. The fatigue detection system monitors the driver’s behaviour and can send out audio-visual alerts if it thinks he or she is getting too tired. We didn’t encounter a situation where this was set off during our test. 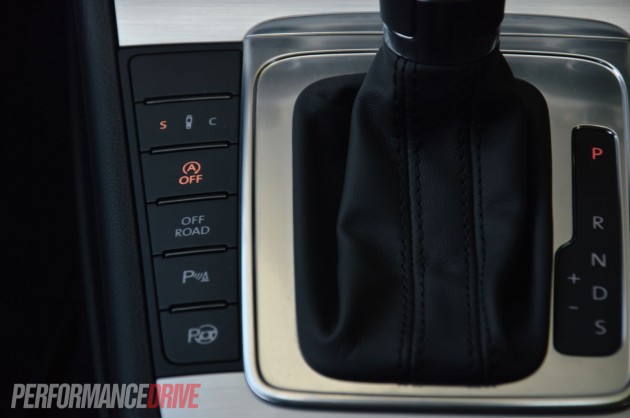 2013 VOLKSWAGEN PASSAT ALLTRACK – ON THE ROAD

It might not be a performance car but it is an adventurous one. You immediately appreciate its multi-terrain friendliness as soon as you jump in. The lifted ride height makes it easy to slide into your seat, although, more importantly, the good driving position of Passat isn’t ruined by being too tall or van-like.

With the Adaptive Chassis Control, which comes as standard, you get three different suspension modes – Normal, Comfort, and Sport. Each of these provides a noticeable difference to the way the Passat Alltrack absorbs bumps.

In Normal mode we found the setup to be the best compromise. In Comfort mode the suspension seems too soft and tends to jutter over sharper bumps and undulations, while the Sport mode is really only good if you’re out tackling some corners somewhere and not trundling about in town; it’s a touch hard and jittery.

Speaking of tackling corners, the Alltrack, like the regular Passat models, is quite capable and provides good handling. The platform remains mostly flat and doesn’t lean or roll excessively, certainly at the front of its class, while mild understeer is the only result of pushing too hard.

If we had one criticism to the handling it’s the steering. It feels rather numb and characterless. It’s not that it’s a horrible mechanism, the directness and the steering box ratio is ideal, but its energy to play and dance through a series of twists and turns always seems lower and less motivated that yours. 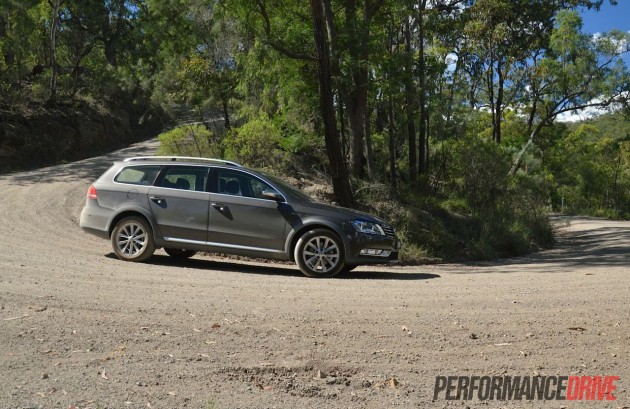 Although we didn’t tackle really adventurous off-road tracks during our test, the Alltrack is ideal for dirt or muddy roads, particularly washed away tracks with ruts and mounds. Though, the 165mm ground clearance won’t get you through the toughest of terrains like an SUV would.

The best part about the Alltrack, in our opinion, is the way the powertrain simply disperses kilometre after kilometre. We achieved over 900km to a tank during our test, and this included around 100km on dirt/rugged roads which usually demand more fuel.

In terms of performance, it’s the torque that matters here. You get 350Nm available from as low as 1750rpm – basically, just off idle. This means once you’re moving, you can easily surge through traffic and overtake if you have to, regardless of how many passengers are on board.

We timed 0-100km/h in 8.5 seconds, which seems reasonable when you take into account the regular two-wheel drive Passat CC TDI takes 8.1 seconds. The CC weighs 1521kg while the Alltrack, with its all-wheel drive running gear, weighs 1704kg.

We feel Volkswagen hasn’t quite nailed the dual-clutch DSG transmission yet, although, it is one of the quicker-changing systems out there, it’s still a little clunky and tends to delay between drive and reverse, and during slower speeds. 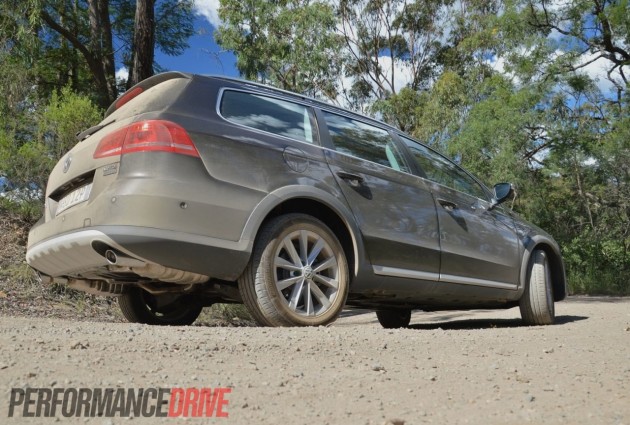 The Passat Alltrack is a well-rounded vehicle, and perfectly suited to families and intelligent drivers who want the latest technologies but also want a vehicle that can accommodate some fun, such as weekend getaways. It’s a Swiss army knife, in other words.

While we found no real ‘faults’ to the Alltrack, it can be a little bit boring. There’s nothing really that stands out as exciting, but at the same time, you get a high quality product that can do a bit of everything. You also get a lot of vehicle for your money. 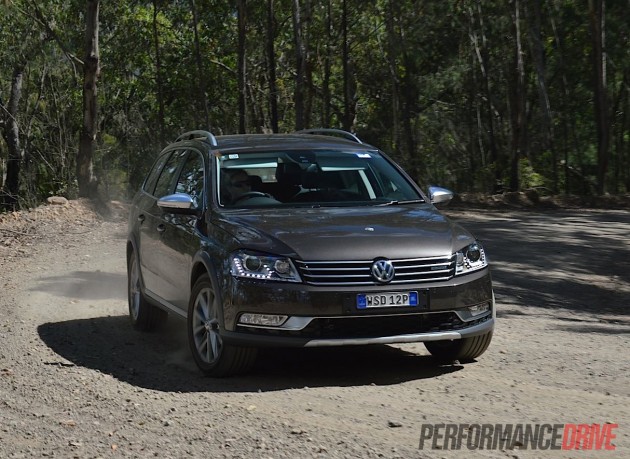 Subaru Outback 2.0D Premium – 2.0-litre turbo-diesel four-cylinder, 110kW/350Nm – 1628kg – $45,490
The Outback is easily one of the leaders, if not the leader, in this segment. The latest model is now available in turbo-diesel form in Australia for the first time, providing much better economy than the petrol counterparts.