Jaguar’s new baby SUV, the E-Pace, has been through the gauntlet of ANCAP’s stringent crash testing regime and come out with flying colours, achieving the full five-star score. 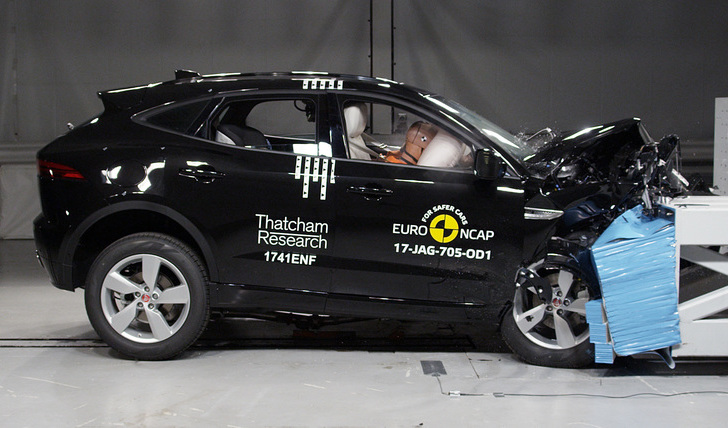 The Jaguar E-Pace doesn’t officially arrive in Australia until March, but ANCAP has taken a close look at crash data from Euro NCAP to provide an early score for peace of mind for buyers before it hits the market.

“The Jaguar E-Pace scored well across all assessment areas and features a ‘pop-up’ bonnet and external airbag to improve head protection for struck pedestrians.”

As standard, the E-Pace will come with an extensive suite of safety features, including autonomous emergency braking with pedestrian detection. These safety assist systems received a score of 72 per cent, with automated braking demonstrating high reliability when tested at speeds of 80km/h.

All in all the test scores returned an overall score high enough to achieve the full five-star credentials. Speaking about the results, Matthew Wiesner, Jaguar Land Rover Australia MD, said:

“Safety is one of our core customer principles and so we’re thrilled that the Jaguar E-Pace has been recognised by ANCAP for its five-star safety credentials. The all-new Jaguar E-Pace compact SUV will bring many new customers to the Jaguar brand in Australia, particularly young families, so safety is an absolute priority.”

The Jaguar E-Pace will go on sale in Australia in March. It will be offered with a number of engine options, with power outputs spanning from 110kW and up to 221kW. Prices start at $47,750 (excluding on-roads).