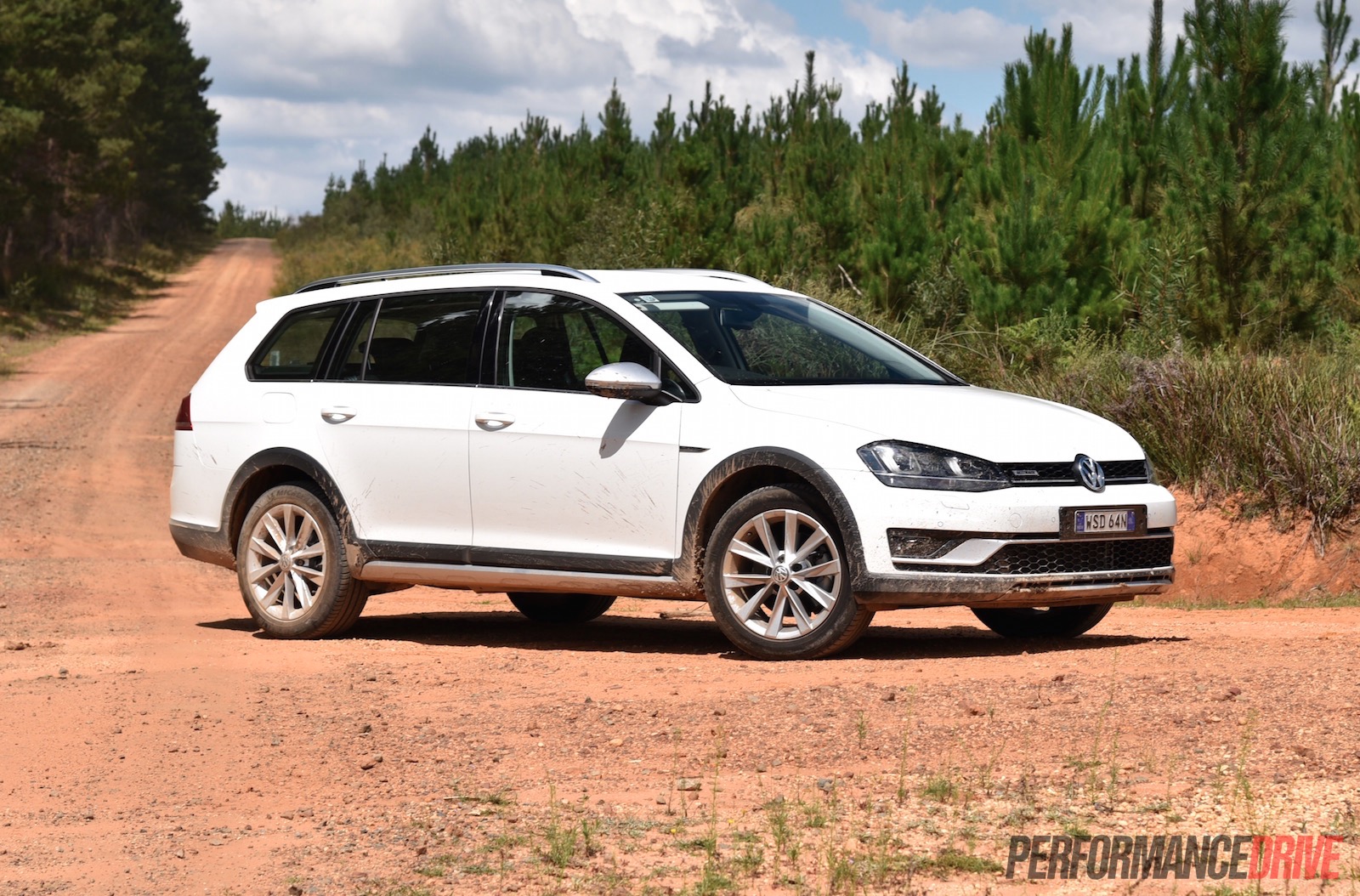 In another attempt to morph together the practicality of an SUV and the economy of a hatch, this is the 2016 Volkswagen Golf Alltrack. 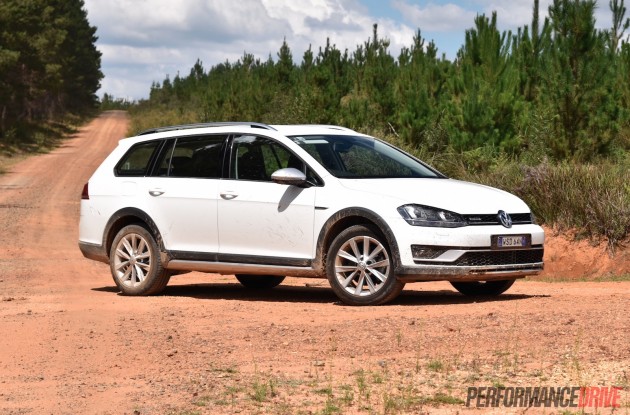 It’s based on the Mk7 Golf and it features a jumped up body with slightly more ground clearance, and a few rugged body trimmings to give it an adventurous stance. In Australia the Alltrack is offered in just one variant level; the 132TSI petrol. This is the first time Australians have been offered an off-road-ready Golf, bidding on the success of the Passat Alltrack which has been available here for a few years now.

With just one variant on offer the lineup doesn’t come much simpler. The engine is VW’s latest 1.8-litre turbocharged petrol, generating 132kW and 280Nm, connected up to a six-speed dual-clutch DSG automatic with “4MOTION” all-wheel drive. This is the only Golf offered in Australia with all-wheel drive aside from the performance-focused Golf R.

Prices start at $37,990 (excluding on-roads), making it one of the most expensive Golfs in the range, only trumped by the GTI and GTI Performance, and the Golf R. 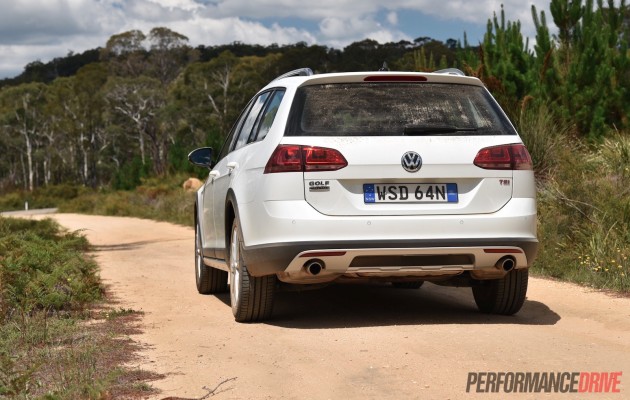 Upon initial inspection the Golf Alltrack has the potential to be the ideal all-rounder, perfectly suitable for everyone from a city-dweller with an adventurous side, growing families, and even for those wanting a second runaround vehicle. Why? Let us explain.

Wagons are practical. They always will be, whether they’re in SUV form or regular low-riding wagon form. For this reason they can also be seen as cool. You can throw things in the back and cart them wherever you need to go. Lots of things in this case, with its 605-litre boot, expandable to a whopping 1620 litres. Adding the ‘Alltrack’ element boosts the practicality just that little bit more, with 20mm of added ground clearance and the grip of all-wheel drive.

Tie this all in with one of the most well-known nameplates in the world and you have yourself a very approachable product that can be enjoyed by the masses. There are a few areas that do require some consideration though. 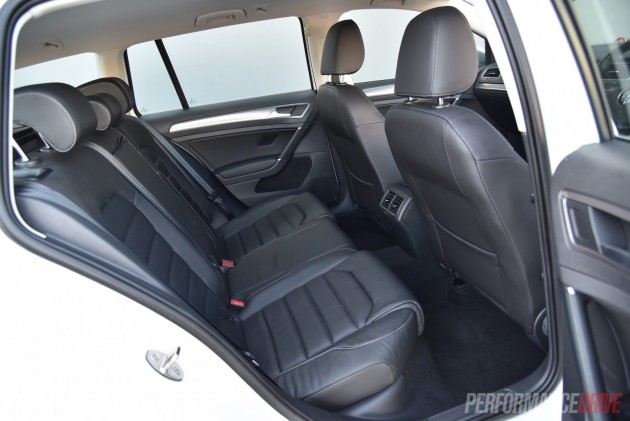 Volkswagen has decided to provide only one variant for the Alltrack, as mentioned. However, it decided to go in with a top-shelf specification. On the Golf foodchain this is the most luxurious model you can get. This pushes the price right up, close to a lot of other reputable SUV rivals. In our opinion this could present a bit of a problem for some buyers, particularly those who might be quite familiar with the Golf’s otherwise friendly price range.

Fortunately, for everyone else, it means you do get plenty of standard features with this machine and a number of quality touches that help separate it from the regular runners in the flooded SUV market. There’s a Vienna leather upholstery, for one, and a comprehensive 6.5-inch touch-screen interface with everything from sat-nav, selectable driving modes, Apple CarPlay and Android Auto, and a rear-view camera all as standard. Every button and knob has that precision-made Germanic quality to it too, and fit and finish is simply outstanding for this class.

The cabin layout is as practical as they come. There are no annoying bits of furniture sticking out, or awkward shapes or seating positions to contend with. This is the most ergonomically-designed and easy-living interior you’ll find in this segment. There’s a decent-size centre console with plenty of storage options around, proper-sized cup holders and bottle holders in the doors, and a centre dash fascia with an assortment of buttons so conveniently placed it’s pretty much impossible for anybody to be overwhelmed by the car’s functions. There are a lot of buttons, yes, but they are spread evenly and intuitively. We guess the only potential drawback to the interior is that you are likely to become bored by it after a short time, compared with some of the flamboyant rivals anyway. 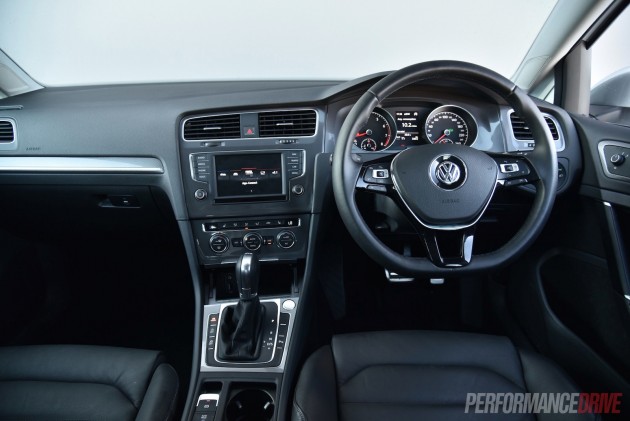 Despite having a pretty ordinary power-to-weight ratio, the 132TSI engine is quite potent for what it is, with a best 0-100km/h time of just 7.82 seconds. This trumps many cars that we’ve tested that produce upwards of 170kW, and even betters some cars that are supposed to be much sportier than they turn out to be. We guess this can be put down to the direct power delivery and instant gear changes of the DSG gearbox.

Even though this is not a sports car the DSG transmission is fantastically fun to operate in manual mode. There are no paddle shifters, which is actually a good thing as it is starting to be a bit ridiculous with some cars offering paddle shifters when they are clearly not designed for F1-style driving. Flicking the gear shifter over into manual mode in the Alltrack and toggling up and down through the gears is rewarding. It feels like you’re actually making a difference in the journey and having a definite influence on the car. Upshifts happen in virtually no time at all and downchanges are prompt and crisp.

When you just want to drive to work or to the shops the DSG can be a bit cumbersome, rolling slightly on hills and delaying between forward and reverse. There is some turbo-lag or transmission delay before engine power is felt as well. This is especially amplified if you’re in regular Drive mode as opposed to selecting the gears manually or leaving it up to itself in the sportier “S” shift mode.

The ride quality is excellent. Volkswagen has done a great job on fine-tuning the suspension and dampers, even for Australia’s poor country roads. The damper setting feels rubbery and absorbent without being too firm, while the compression range is ample and able to withstand potholes and nasty corrugations without sending any vibrations through to the cabin. 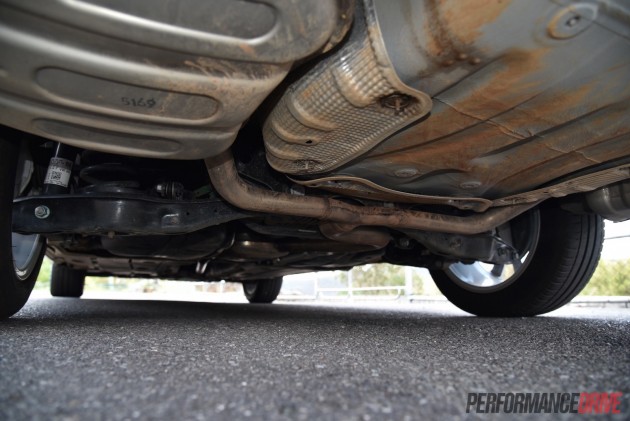 In terms of handling, the Golf Alltrack is much like its regular counterpart; it’s not going to win any awards on steering feel or overall engagement but there’s no denying its cornering stability, chassis balance, and sheer grip threshold. It does very well to hang on around bends, whether in tight hairpins or around long sweepers. You can feel the 4MOTION working its magic too, helping the Golf to pivot while maintaining momentum. In the wet the all-wheel grip really comes into its own. There is simply no wheelspin or hesitation. In conditions like this the Alltrack really is a safer alternative to the regular variants.

As for the off-road performance? This is not an SUV, so you shouldn’t expect it to perform like one. Along rough dirt roads is about the car’s limit when it comes to adventurous exploring. Again, the 4MOTION grip is flawless and it will pull you through terrain that would otherwise leave the regular Golf stranded. An extra 20mm of ground clearance does help to clear small roots and ruts, but the lower body panels and underbody are still quite fragile. If you’re looking at buying an SUV because you want to drive off road, there are other more suitable options around. 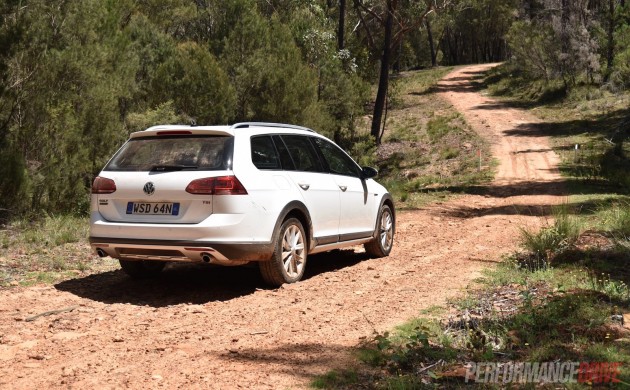 Instead of looking at the Golf Alltrack as a crossover or SUV, we suggest you look at the Alltrack as simply the flagship Golf. It offers the broadest range of ability of all Mk7 Golf models, including offering the highest level of luxury and technology. In that respect, it is a very practical and surprisingly fun alternative to the mainstream SUVs that are out there at the moment.