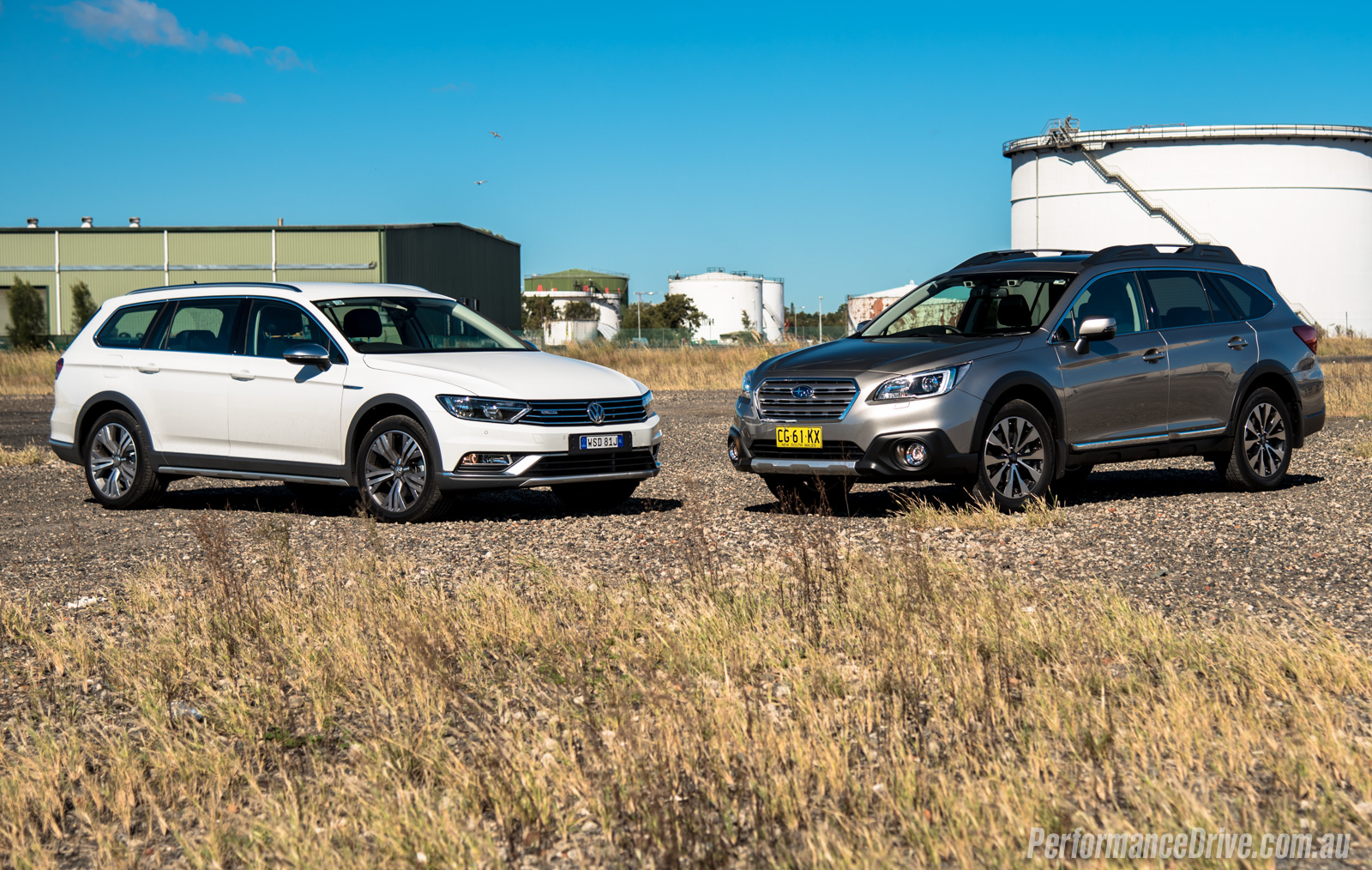 With SUV segments flooded with a bewildering array of options at the moment, buyers might want to consider raised-up wagons such as the Subaru Outback and Volkswagen Passat Alltrack. These aren’t fully-fledged SUVs but they do offer similar practicality and some off-road ability. 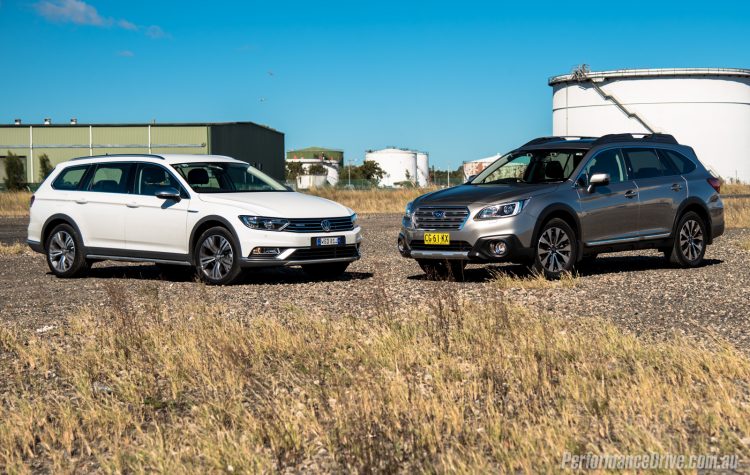 Subaru pioneered this segment when it first launched the Outback back in 1994. Like the original, the 2016 model is based on the Liberty. In fact, there is no more Liberty wagon (in Australia); the Outback is the local replacement. Subaru offers a 2.5-litre flat-four generating 129kW/235Nm, and a 3.6-litre flat-six producing 191kW/350Nm. There is also a 2.0-litre turbo-diesel option developing 110kW/350Nm – one of the only boxer-layout diesel engines in the industry. For the purpose of this comparison we’re using the 3.6R as it is priced right next to the sole Passat Alltrack offering.

As for the Passat Alltrack, it’s based on the recently-introduced eighth-generation Passat. In Australia it’s offered only with a 2.0-litre turbo-diesel four-cylinder producing 140kW and 350Nm. This, like in the Outback, is hooked up to an all-wheel drive system.

Prices start at $48,490 for the Outback 3.6R, and from $49,290 for the Passat Alltrack. As a side note, the 2.0 turbo-diesel Outback with a manual transmission starts from just $35,490, giving buyers an alternative option (all prices exclude on-road costs). 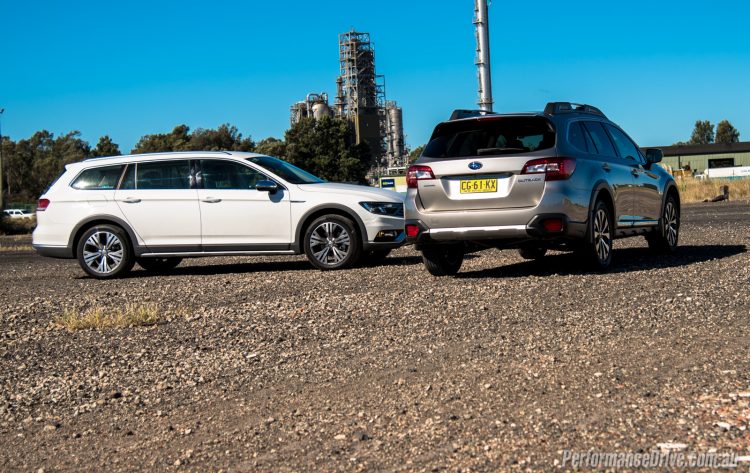 Being priced at around the $50k mark means these cars do have to present a decent amount of luxury and technology. Fortunately, both of them are extensively packaged. Radar cruise control with automatic distance control is standard on both, along with automatic emergency braking (low and high speed). Steering in the Volkswagen adds lane-keep assist with automatic steering adjustment, however, both cars make long journeys an effortless experience.

In the Subaru you get a 7.0-inch touch-screen interface with in-built apps such as Pandora, sat-nav, a clear reversing camera, and two USB ports. Sounds are sent through a high quality 12-speaker harman kardon stereo that really cranks. Subaru car stereo systems of late have been pretty ordinary, but this unit is very impressive.

For the Passat, it gets a slightly larger 8.0-inch touch-screen interface that misses out on Pandora, but it does come with Apple CarPlay and Android Auto functionality. Sat-nav, a rear-view camera with bird’s eye view, and a more comprehensive on-board storage (10GB) with two SD card slots and USB ports are part of the Alltrack package. Music is sent through an inferior eight-speaker sound system. At max volume the Subaru produces 99dB while the Passat tops out at 93dB. Although the peak decibel doesn’t tell the full story, the Subaru’s unit is much clearer and offers a higher-quality sound compared with the lower-decibel Passat. 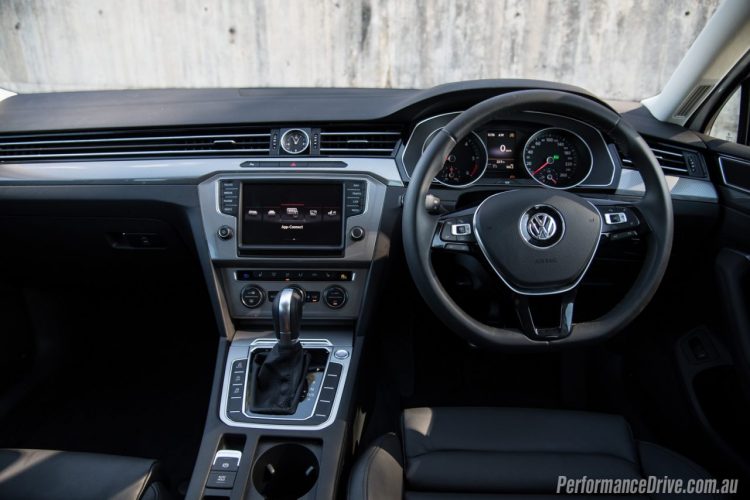 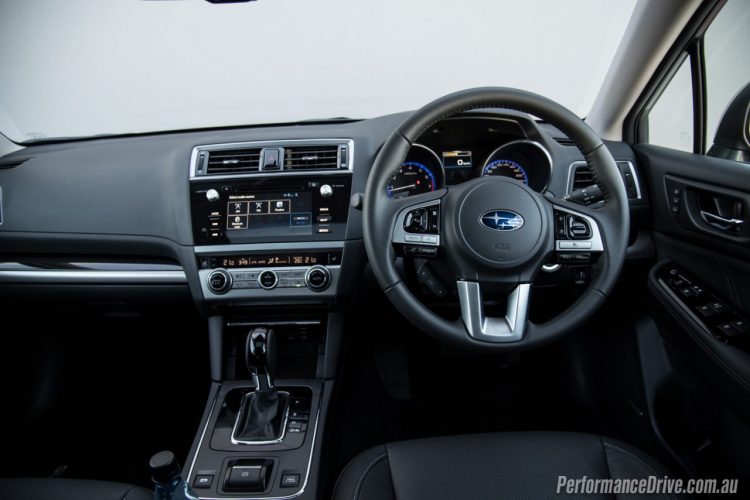 Overall space and comfort is very similar. The Passat does present Volkswagen’s typical conservative layout, with intuitive controls and conventional placement for buttons and functions. There are a lot of buttons on the Passat’s dash, but it’s all quite easy to understand. Build quality seems at the top of the game too, with a decent spread of materials making up the cabin. If anything, the Passat decor can seem a little cold and sterile, especially when jumping from the more interesting Subaru.

In the Subaru, the leather seats are softer and the cabin seems more cocooned and homely. In saying that, some of the dash fascia controls can seem a little too futuristic and overwhelming. The layout and functionality is conventional, but the actual buttons and knobs aren’t as consistent as those in the Passat, meaning they can take a moment to read to fully understand.

Cabin space is equal in both vehicles. If anything the Subaru’s slightly more cluttered layout might seem to be more intrusive, while the Passat’s typically clean and square approach can give the impression of more space. The centre console and rear seats do seem more open and airy in the Volkswagen, and there is a bit more room to move about.

Cargo space goes to the Passat, but only by a whisker, offering 639L/1769L against the Outback’s 512L/1801L. Both present a flat cargo floor and easy loading height. Towing capacities are rated at 1800kg for the Outback and 2200kg for the Volkswagen (braked). 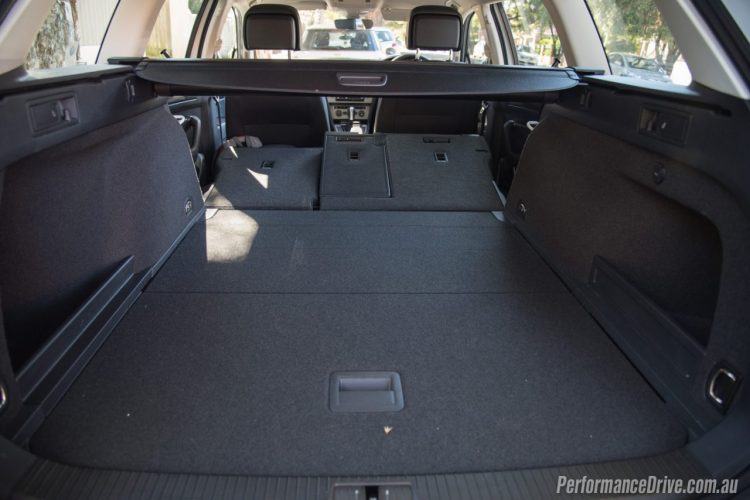 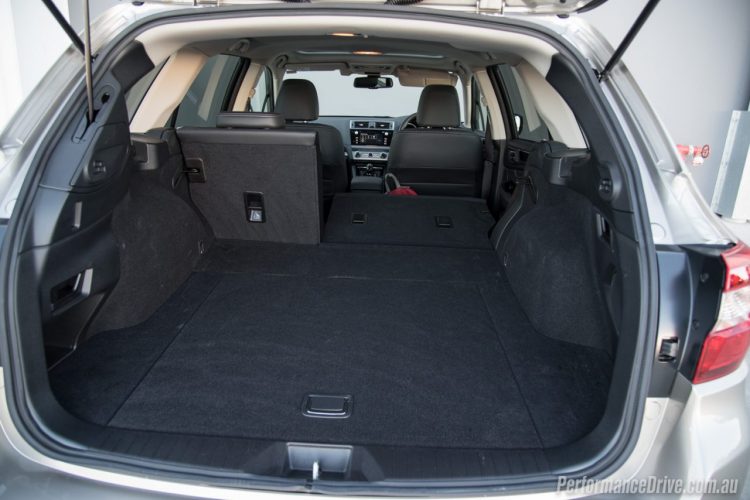 Despite sharing similar proportions and ambitions, these two vehicles are quite different in terms of driving character. The Subaru is noticeably softer, absorbing bumps with a smoother action and offering a nicer ride, partly thanks to taller tyres (225/60 vs 225/45). However, the Outback offers inferior cornering stability and grip compared with the Passat. We put some of this down to the very different tyre types adopted.

Volkswagen, in a typical Germanic way, has gone for better on-road handling. There is less body roll and the tyres will hold on for longer before reaching screeching point. It’s not all positive in the Passat though, as the steering is rather numb and emotionless, with formal feedback coming through to the driver. The Subaru’s steering is, strangely, more eager and responsive, but the soft suspension and tall tyres make it a less-than-perfect cornering machine. It presents noticeable body roll and falls behind the Passat’s composure. 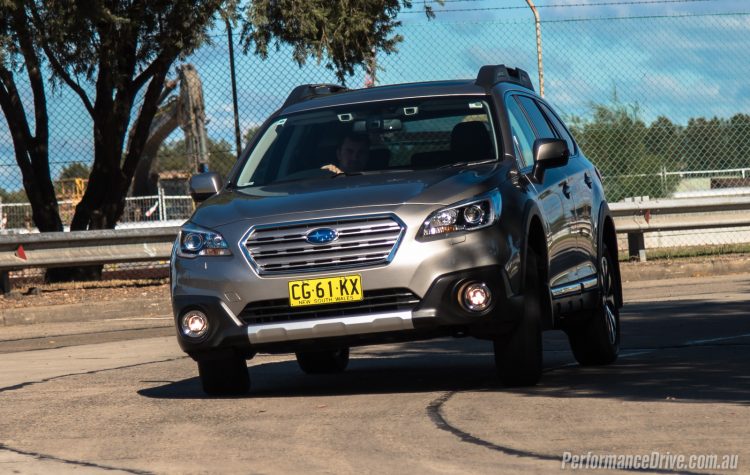 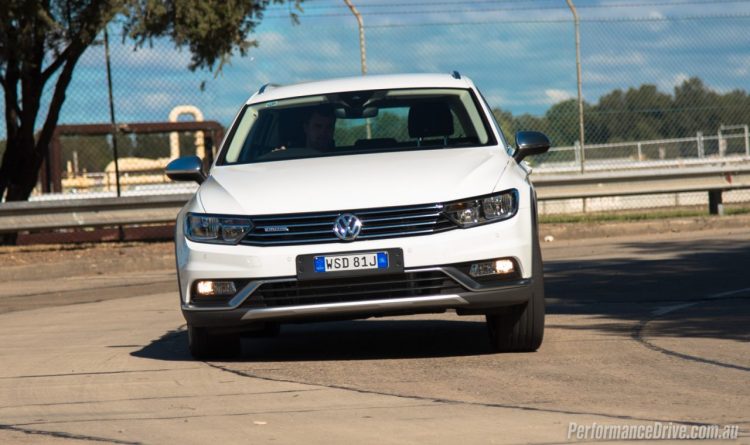 In day to day conditions there isn’t going to be any complaints in either vehicle, with the Subaru just edging out for sheer comfort. We think buyers of this type of vehicle will probably warm to the Subaru’s setup more easily compared with the more capable but less inviting approach Volkswagen has gone for.

What about off the road? Well, those tall tyres on the Outback result in superior all-terrain adaptability compared with the Passat. Both feature 18-inch alloy wheels but the lower-profile tyres on the Passat do limit its off-road capability. Ground clearance is also more favourable in the Outback, with 213mm against the Alltrack’s 174mm. This means the Outback can actually venture off the road and take on very rough dirt roads or even mild 4×4 tracks. Whereas the Volkswagen is limited to moderate dirt roads.

With full-time four-wheel drive in the Subaru you don’t have to wait any amount of time for the power to be sent to all fours. The Passat uses an ‘on-demand’ system that only sends power to the rear wheels when there is slip detected. This helps with fuel economy in the VW, but it means the Subaru will perform better at pulling boats from a slippery ramps, for example.

Speaking of fuel economy, the Passat obviously uses a lot less fuel than the 3.6 petrol Subaru. Officially, the Subaru uses 9.9L/100km while the Alltrack sips just 5.4L/100km. This difference is replicated in the real world, although the figures are higher for both. At the other end of the spectrum, we timed 0-100km/h in 9.30 seconds in the 140kW Passat and 8.19 seconds in the 191kW Subaru. 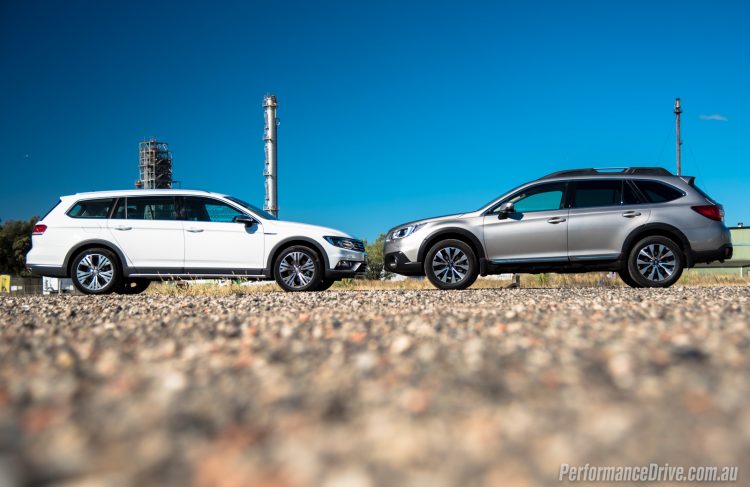 2016 Subaru Outback vs Volkswagen Passat Alltrack: Which one should you buy?

We enjoyed our time in the Outback more than our time in the Volkswagen. The interior seems more pleasant and comfortable, and the genuine multi-terrain versatility means it is a more adventurous machine. We do like the clever technologies in the Passat though and the more advanced touch-screen media interface. And the real-world fuel economy is brilliant.

If it were our choice we’d go for the 2.5-litre version of the Outback and save over $6000. The performance benefits for this 3.6R aren’t justified in our opinion; the fuel consumption is unacceptable for this style of vehicle and for the relatively poor performance you’re getting. Going for the 2.0 diesel Outback doesn’t really tickle our fancy either as the CVT transmission doesn’t do much for the already-lethargic acceleration offered with the 110kW diesel. Put the Volkswagen’s 140kW TDI into the Subaru and you’ve got yourself the perfect Swiss army knife of vehicles.