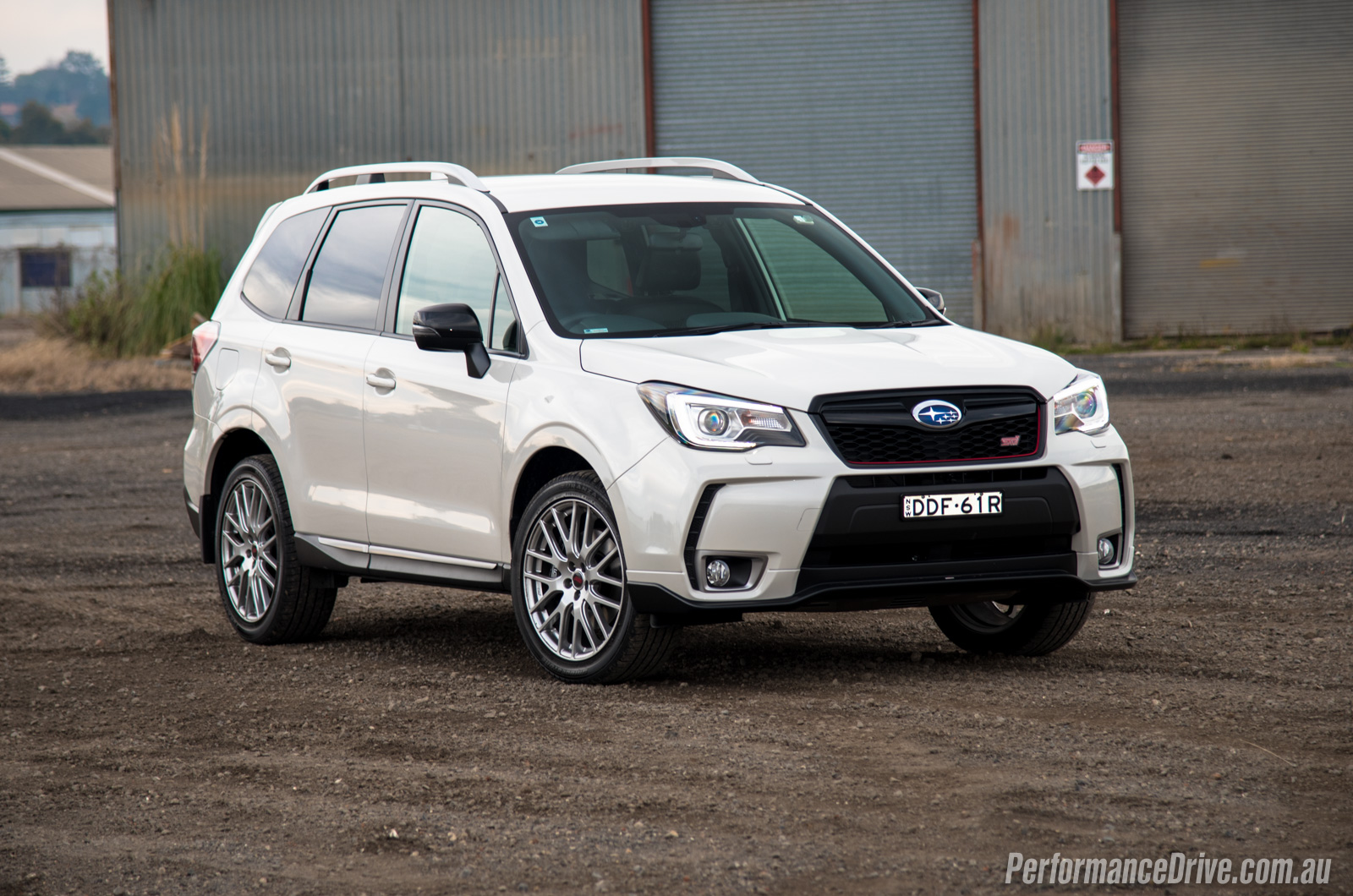 Could the SUV be the new minivan? This style of vehicle has seen obscene levels of success in the last few decades, where it has more-or-less overtaken the sedan as the default go-to car. Not only are they fashionable, but the increased ride height gives many a feeling of safety and makes getting in and out easier. 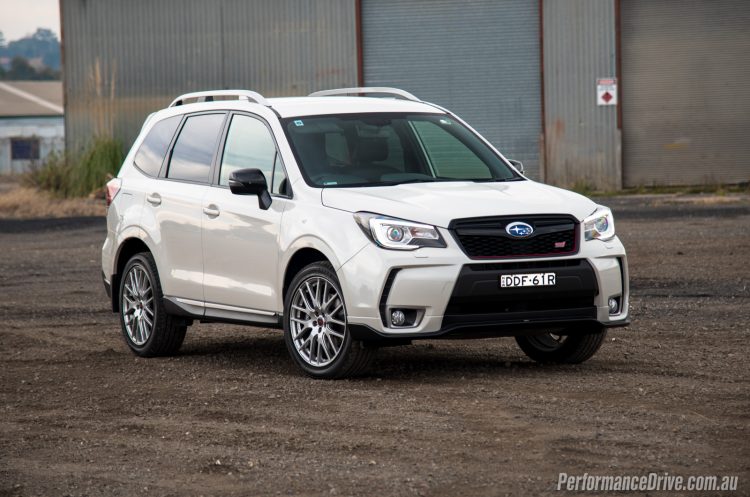 To others, it’s a choice forced upon them because they have kids; the breeder bus of the 21st century. With the 2016 Forester tS (tuned by STI) limited edition, Subaru has sought to banish the mumsy feeling by adding true sporting pedigree.

While sharing outputs with the 177kW, 350Nm XT Premium on which it’s based, a plethora of internal, external and chassis upgrades make it the only sports SUV in the mainstream mid-size category. To get a similarly themed SUV, you’d have to reach up to premium offerings such as the Audi SQ3, Mercedes-AMG GLA 45, Porsche Macan or BMW X3. The Ford Kuga Titanium offers a similar output of 177kW but with no sporty ST variant in sight, and no sporting character. Ruefully, the JDM tS gets 206kW, with ours detuned due to fuel quality – it stings if you’re prone to FOMO (Fear of Missing Out).

Three colours are available; the hero WR blue, Crystal White as seen here or Crystal Black silica. Priced from $54,990, all but around 130 of the 300 allocation destined for Australia have been snapped up (at time of writing). Is it worth the hype? We went to painstaking lengths to find out. 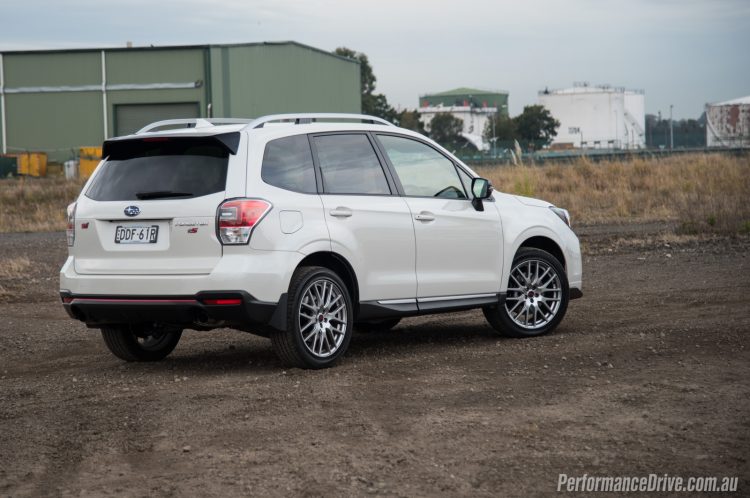 Subaru promises $12,000 of additional value for a $7000 impost over the XT Premium (but ditches the sunroof).

Starting from the outside, it is a vibrant, cool and sporty-looking car thanks to 19-inch Enkei alloys, blacked out grille and mirrors, cherry red stripe accents on the grille and rear bumper, deep chin spoiler and bodykit, and a gnarlier attitude thanks to 15mm lower ride height. The car is riddled with STI badging which makes it pop.

The suspension is where the real work has been done here, with STI tuned dampers, stiffened rear subframe bushes, harder front anti-roll bar bushing and ‘flexible draw stiffeners’, which are said to improve steering feel. A massive front strut brace and extra stiffening all point to a transformative experience, as do four-piston front and two-piston rear Brembo brakes.

Inside, the STI steering wheel has a real cool factor about it, with the red and black theme continuing throughout. Red stitching, STI gearknob, red accents on the climate control and a big red STI starter button grant the car a genuine sense of occasion. 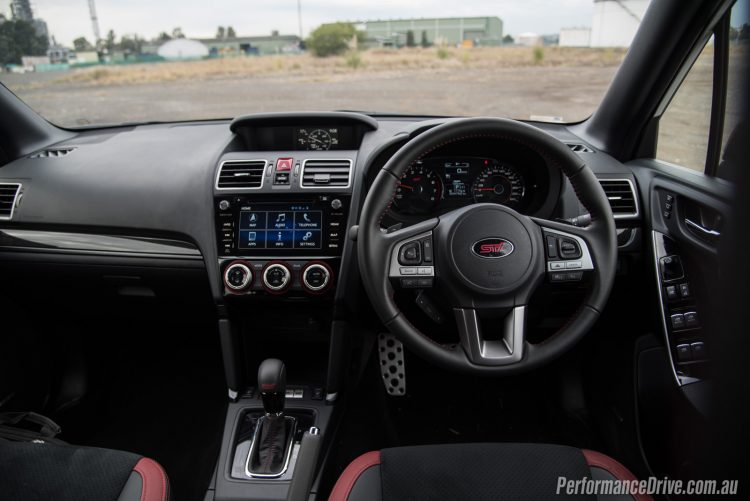 Fundamentally, the Forester is a well-loved and practical beast, which is why over 8000 have found homes so far this year (July 2016 VFACTS). It is roomy inside, with plenty of headroom front and back, and a 422L boot which we couldn’t access due to a stuck tailgate on this example.

The interior layout is similar to the Impreza and WRX, with logical dials and displays and a touchy infotainment system. The stereo system produces great audio quality with pounding bass but is distracting to operate while on the run due to fiddly touch-sensitive buttons and counter-intuitive menus. In this test car, the satellite navigation system calculated insanely long routes, but this may have been a software error specific to this vehicle. 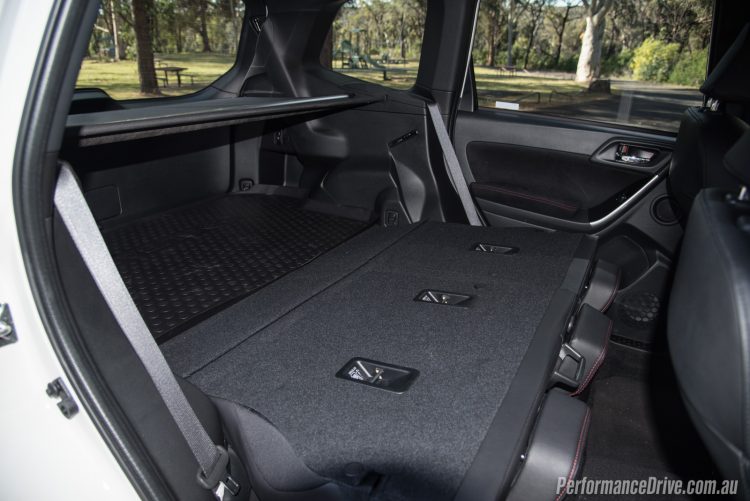 Having driven the WRX in CVT and manual last year, it is amusing to feel this character distilled into a higher-riding vehicle. And successfully. The extensive chassis work is immediately apparent with the first turn of the wheel. The car feels agile, eager to turn into corners and exceptionally balanced, with only a slight feeling of top-heaviness.

The tS is capable of changing direction rapidly and demolishing switchbacks with ease, aided by good throttle response, which is just as handy in traffic warfare. The mechanical grip and balance are top notch, but the rear end will always stay planted, despite our best efforts to provoke it.

The engine makes a muted but fruitful noise in Sport Sharp (S#) driving mode, the hardest of its three settings, accompanied by responsive thrust. We recorded a best 0-100km/h time of 7.18 seconds, which is commendable for this type of vehicle. It feels every bit as quick. Interestingly, our 0-100km/h time is over 1.0 second quicker than what we recorded in the regular XT (8.27). We find this very strange considering they both have the same power and torque, and if anything the XT is 4kg lighter. Both were tested on the same road with the same VBox Sport. The difference could be due to possible minor revisions to the CVT (not officially stated), lowered ride height (more aerodynamic), and lighter weight wheels. We’ve also seen mixed times with the regular XT and while testing this tS, which could suggest the CVT isn’t consistent in power delivery. 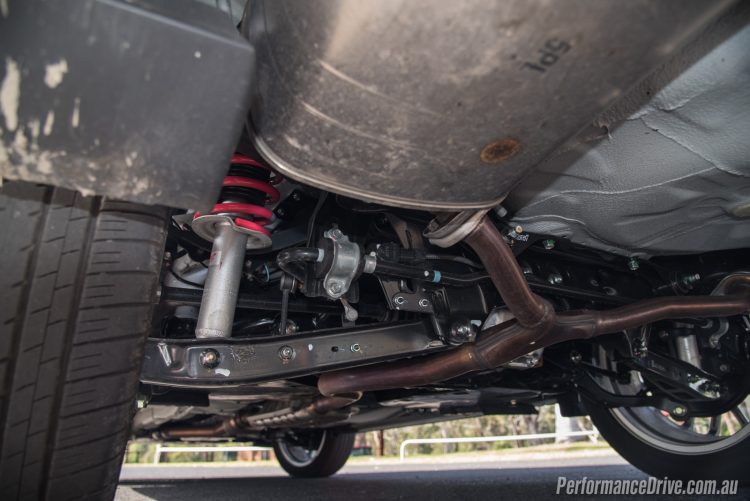 Back when we reviewed the WRX CVT, we noted the gearbox was not suitable for a sports sedan, citing an artificial feeling more at home with the Gran Turismo/Forza set. The more relaxed nature of this gearbox suits this style of car in the daily grind, but the lack of engine braking from the artificial gearing ruins progress in tight corners, when you have to rely on the Brembos. The brake pedal feel leaves a lot to be desired, with all of the bite at the end of pedal travel, making it hard to modulate. They do offer effective performance in emergencies though, registering a 100-0km/h stop in just 36.95 metres (compared with 41.0 metres in the XT).

The brakes and recalcitrant gearbox slightly tarnish an otherwise high-precision cornering instrument. We wouldn’t suggest the WRX’s notchy manual as a solution, but rather a dual-clutch or conventional automatic. One benefit of the CVT is fuel efficiency, quoted officially at 8.5L/100km, with 10.3L/100km seen during our time together.

Refinement is good with no undue noise, excellent build quality and a decent ride at all times, despite the sports theme. Safety is excellent too thanks to a rigid body and five-star ANCAP safety rating.

On the active safety front, Subaru’s Eye Sight package is a true delight. Cleverly identifying obstacles from cars to cyclists, dogs and pedestrians, it gives an audible warning when they approach, or if the car ahead of you moves off in traffic.

Adaptive cruise control makes for tireless cruising, giving the tS a duality of character. It’s a relaxing mile eater and playful terrier around corners. Placing the car in parking spots is easy, but its worth noting the camera has only fixed guidelines with no audible sensors. 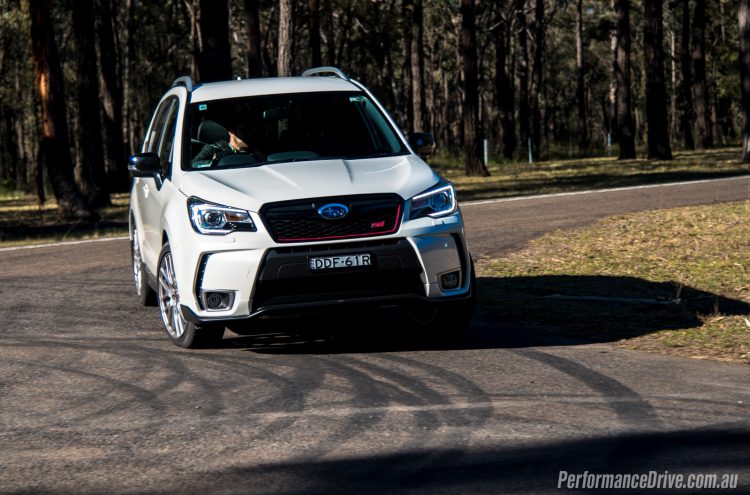 With the Forester tS, Subaru has created an appealing package with the look and feel you’d expect from an STI. The fact it’s an SUV actually adds cool factor this time around and the limited allocation of 300 means resale should be good. In fact, the sales success of this car could force Subaru to consider making a similar model a permanent fixture at some point in the future.

The minor gripes of infotainment ergonomics, brake pedal feel and CVT don’t detract from what is a unique and attractive proposition. We say if you have to get an SUV but still enjoy driving, the Forester tS can keep you relatively excited.