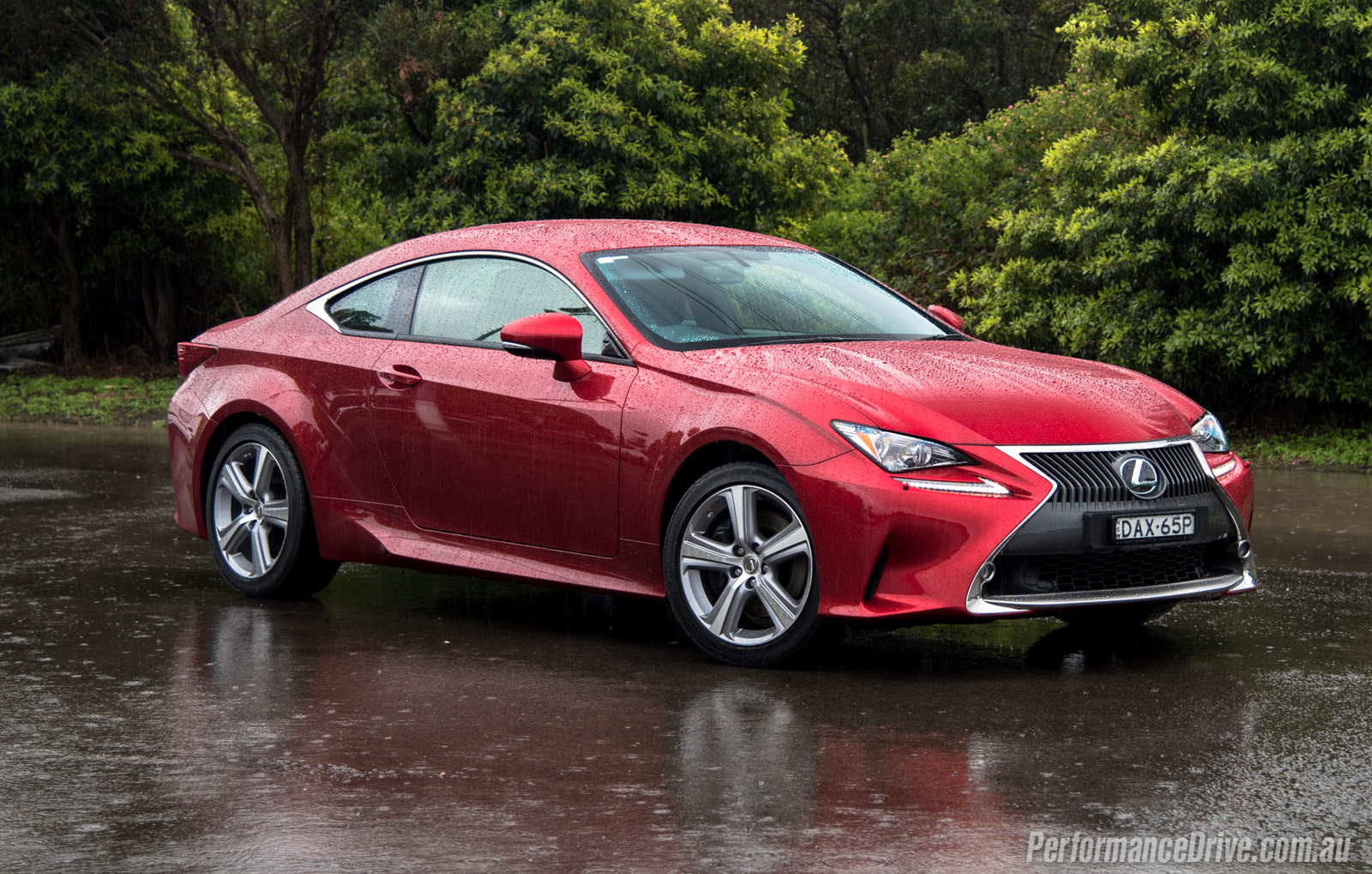 Lexus’s LF-A supercar-inspired RC coupe is something of a bitsa. Developed using a combination of GS (front-end), last-gen IS hardtop convertible for the floorplan (sharing 2730mm wheelbase) and rear-end module from the current IS mid-size executive sedan, you could be forgiven for thinking the RC is a bit of a franken-car. 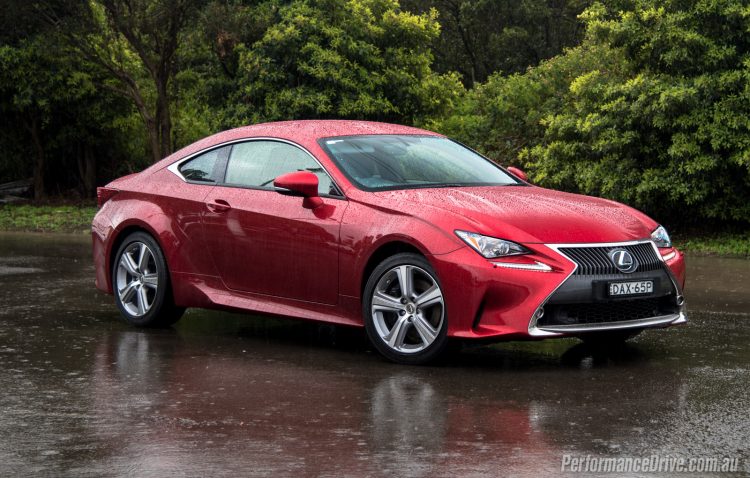 You’d be absolutely wrong, as the 2016 RC 200t oozes the pedigree befitting a newly revitalised Lexus, whose distinctly Japanese identity gives it a real point of difference against a set of devastatingly accomplished rivals.

Those rivals include the German Mercedes-Benz C-Class Coupe, BMW 4 Series, Audi A5, and soon its svelte compatriot Infiniti Q60 will be joining them. If you want to play in this league, you need visual sex appeal, loads of luxury equipment, swift pace and genuine driver appeal.

Tested here in $65,090 Luxury entry point guise, can the 2016 Lexus RC200t, with its new-for-2016 2.0-litre turbo engine, pamper your senses? Or are you better off getting acquainted with one of its nemeses?

* Figures as tested by PerformanceDrive on the day in wet conditions. Factory claims may be different 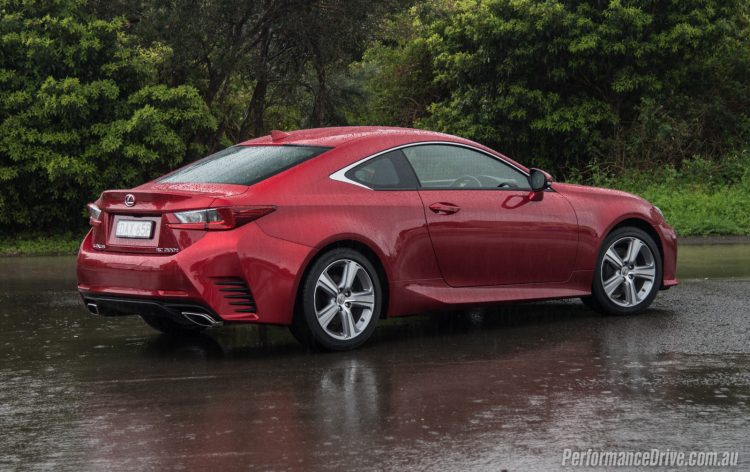 Starting with the visual side of things, you are immediately drawn to the chrome-lined spindle grille, flanked by the ‘Nike swoosh’ LEDs with matching ‘L’ taillights.

Your eyes then travel along a very long bonnet with classic rear-wheel drive proportions, into a swoopy coupe body with buxom rear wheel haunches and a wedgy character line. The rear is aggressively styled but in a tasteful manner. The overall look is cohesive, athletic and classy in our eyes, but that is subjective. This is helped by 18-inch five-spoke alloys. You’ll need to move up to the $74,180 F-Sport to get 19s.

Opening up the rather hefty doors reveals a large-ish cabin (for front occupants anyway), with an electric steering column moving out of your way to welcome you inside. Once immersed into the cockpit, the sensory rewards begin, with your lower back and upper back well supported by superb leather seats. They offer both cooling and heating functions. 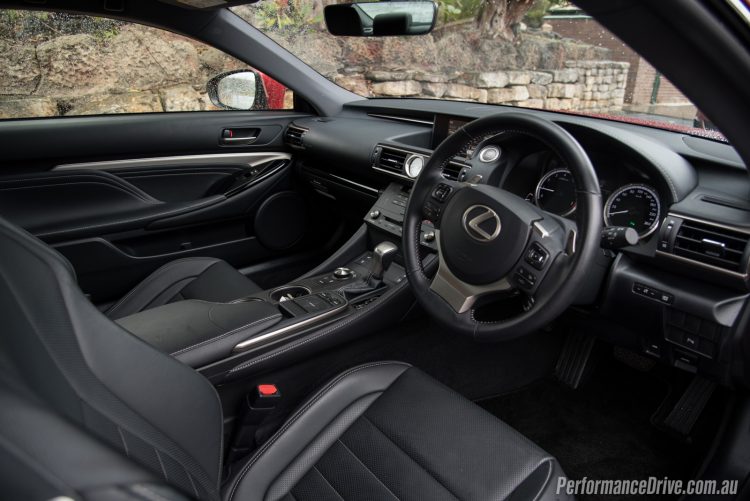 Before you sits a conventional, easy-to-read instrument layout, a sloping central tunnel and 7.0-inch infotainment screen, an analogue clock, and auxiliary switches for stereo and touch-sliders for the temperature. Most functions are controlled by the clever touchpad, which gives haptic feedback through your fingertips. To this reviewer, it is logical and easy to learn, although you need to be stationary to input navigation and pair a phone.

A rotary dial for Eco, Sport and Normal driving modes sits beside the transmission shifter, while the parking brake is foot-operated.

You sit nice and low, with the overall ambience feeling prestigious leaving a great place to spend several hours. 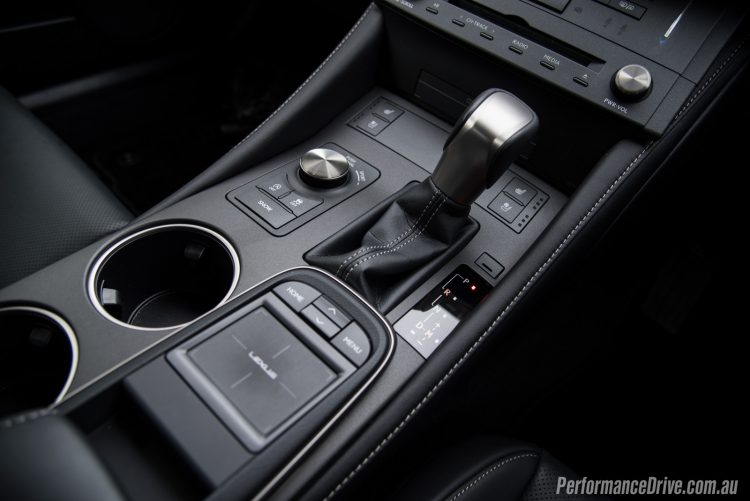 The stereo is outstanding, offering crisp definition and delicious bass. It took all the abuse Skrillex could throw at it, but if you want even better you’ll need the $84,890 Sports Luxury with its 17-speaker Mark Levinson system. With the standard item being so adept, we can only imagine how incredible the 17-speaker unit sounds.

Gripes are minimal for the interior, but there is a lack of digital speedometer or heads-up display on this Luxury variant. F-Sport and Sports Luxury do get a full TFT instrument display. Rear seats are comfortable enough if the front occupants are prepared to sacrifice some of their legroom. It’s worth noting the Mercedes C-Class coupe has a 110mm longer wheelbase if this is a concern, but cedes 45kW and one gear to the RC 200t.

Speaking of powertrain, the new 8AR-FTS engine is a latecomer to the 2.0-litre turbo party. With 180kW and 350Nm channeled through an eight-speed auto, it promises consumption of 7.3L/100km. The comparatively low official economy is partly thanks to the engine’s ability to switch to fuel-saving Atkinson cycle for cruising. This might be the cleverest turbo four in the class, until Infiniti puts its revolutionary VC-T in the Q60.

When you are on the freeway, there’s adaptive cruise control but other driver assistance features such as lane keep assist and blind-sport warning are reserved for the higher grades.

Boot space is a class competitive 423L, necessary for retired Floridians to fit two sets of golf clubs in. Underneath the boot floor sits a lowly space-saver spare. 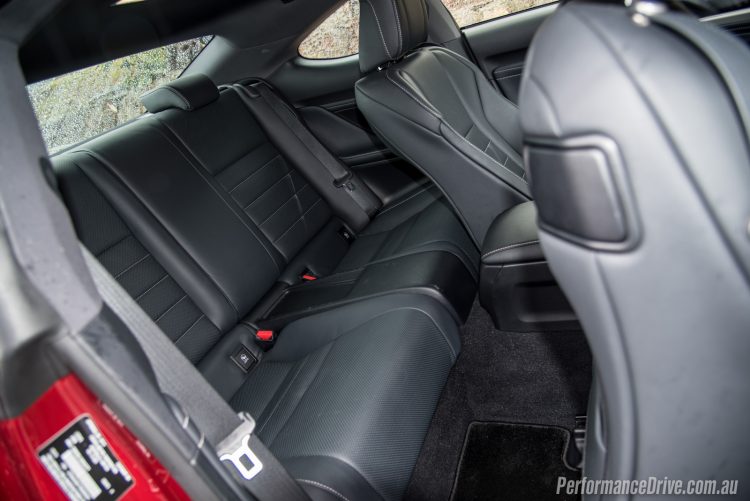 As you would expect, the RC 200t continues to reward your senses as you set it in motion. Engineers have successfully isolated any unwanted noise or vibration, with the engine and gearbox velvety smooth at all times.

Throttle and brake response is always outstanding, giving good feedback through your feet. The steering, though, is outstanding, with a positive magnetic feel, sharp response and no kickback. It stimulates your arms and hands, if not quite your fingertips like a BMW’s steering, but you have the haptic touchpad for that.

Through corners, you can certainly feel the 1685kg weight, but it is well distributed. It always does what you ask of it and even at high-speed, turn-in and composure is brilliant. It’s definitely capable of delivering thrills through the bends.

Even though it lacks the adaptive suspension of higher-up models, at no time do bumps crash through to the cabin and disturb your focus. It is supremely comfortable at all times, even in the city and along dodgy roads, living perfectly up to Lexus’s tradition. However, the long nose is susceptible to driveway scrapes and creates visibility issues if you’re parked next to an SUV.

Performance is surprisingly good, save for some delay getting off the line from the electric throttle and minor turbo-lag. In wet conditions we timed 0-100km/h in a swift 7.92 seconds. We think this could be improved slightly in dry conditions, although not by much as traction is very good, even in the wet.

Switching from Eco to Sport gives the engine a snarly edge at high rpm and noticably sportier gearshifts. At the other end of the spectrum the Eco mode does its best to conserve fuel by upshifting sooner and giving you relaxed throttle sensitivity.

The stop-start function is not the quickest responding we’ve tried but not the slowest either. Luckily you can turn it off. In any case, we averaged 10.2L/100km during some heavy driving but this dipped into the low 7s once we hit the freeway. The adaptive cruise control is an effective highway companion, if a little over-zealous with braking in certain conditions. It switches off automatically under 40km/h. 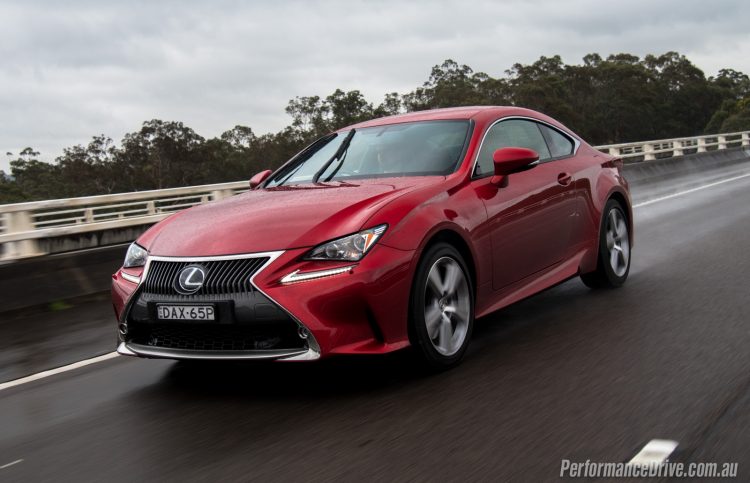 For its price, the RC 200t Luxury offers a convincing blend of solidness, refinement, pace, style and technology. The engine might lack a bit of character, but there’s always the V6 for not much more cost, or the flagship RC F V8.

One elephant in the room is the RC’s weight disadvantage. Its 1685kg tare mass doesn’t compare well with the equivalent Mercedes C 200’s 1525kg weight, or the BMW 420i’s 1475kg mass. This means it cedes outright agility and efficiency to some rivals.

The RC’s extra style, value and solid engineering make it a worthy contender that conveys to everyone that yes you’ve arrived and you’ve bought a high quality, precision-engineered machine that doesn’t need excuses or justification.

CONS:
– No digital speedometer on base model
– Long bonnet can make getting out of car parks a hassle
– Much heavier than rivals