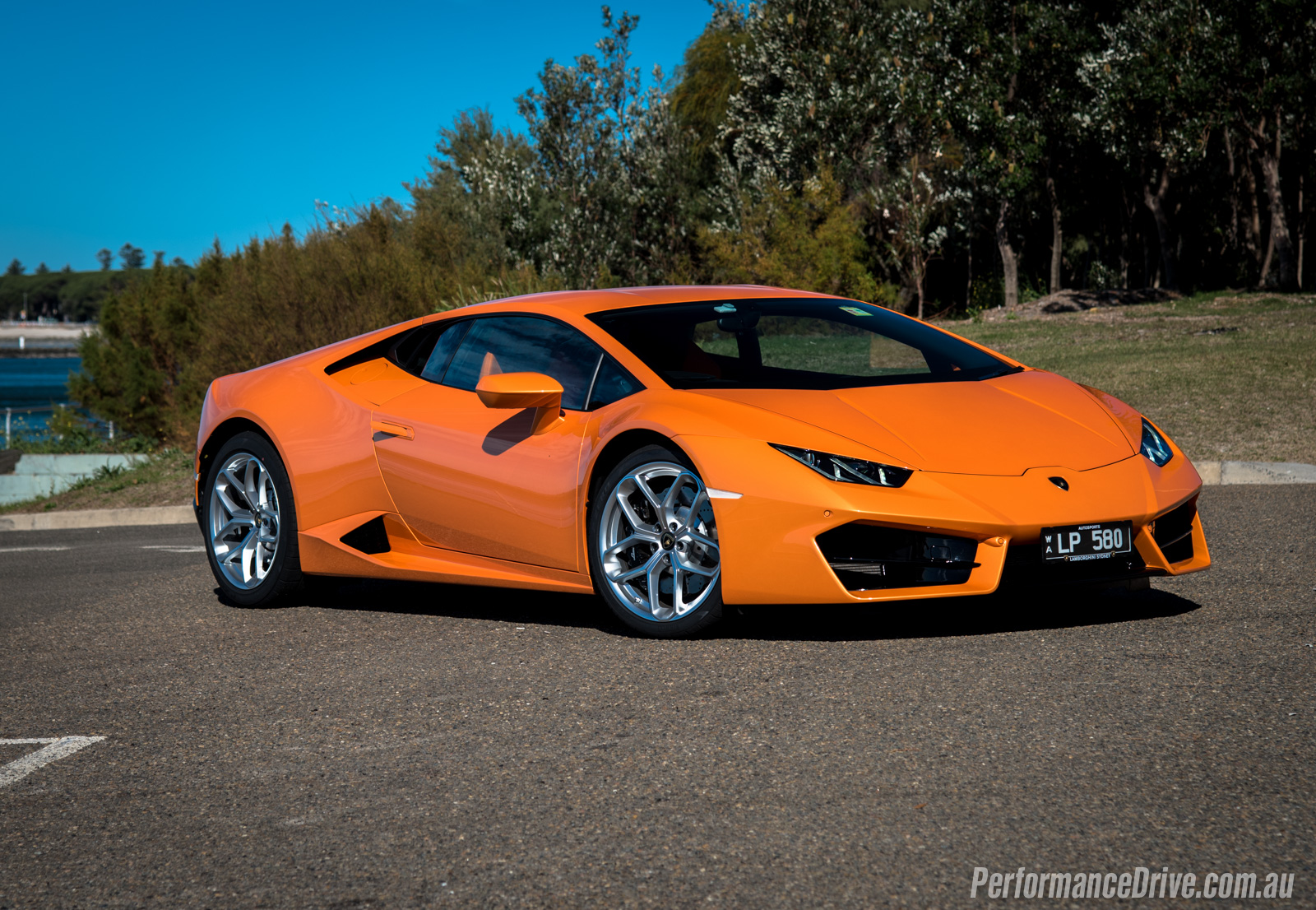 High-revving, naturally aspirated, rear-wheel drive supercars could soon be extinct. While other high-end carmakers turn to turbochargers and all-wheel drive, Lamborghini is happy to serve some of us old-fashioned types with formulas that we still love. Welcome to the Huracan LP 580-2. 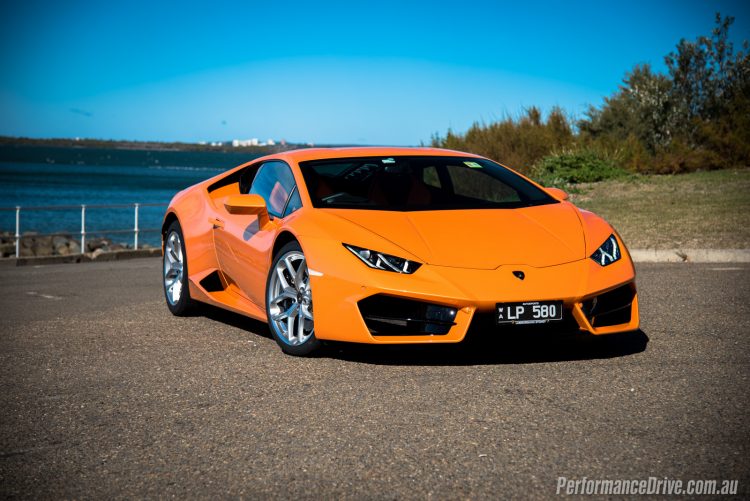 For those that missed our track test of this machine, the 580-2 is the rear-wheel drive version of the Italian marque’s entry-level supercar. Power is down compared with the LP 610-4 that was introduced first, however, the genetics remain unchanged. This is an unfiltered, unadulterated supercar in the traditional sense of the term.

So, you get a high-tech 5.2-litre naturally aspirated V10. It uses some of Audi’s clever FSI direct injection technology paired with multi-point injection, and it offers perhaps the most important element of any supercar; a high rev limit. Peak power is only accessible if you have the courage to rev the engine all the way to 8000rpm. At this engine speed you’ll be struck with 427kW. Even peak torque requires 6500rpm (around the redline for most conventional petrol cars).

These outputs are marginally down on the 610-4’s 449kW and 560Nm capability, but as we’ll discuss later on, the power output will be the least of your concern.

Being the entry version of the entry model, the Huracan LP 580-2 is the most affordable Lamborghini you can buy on the new car market today. In Australia prices start at $378,900 (excluding on-roads). Sure, not everyone has this kind of pocket money hanging around. But look at it this way, the most affordable V10 Ferrari you can buy… is non-existent, and McLaren only offers a puny 3.8-litre twin-turbo V8 in all of its cars. The closest thing is the $485,000 Aston Martin Vanquish V12 or the $691,000 Ferrari F12 V12 in terms of traditional, naturally aspirated, high-revving supercars. 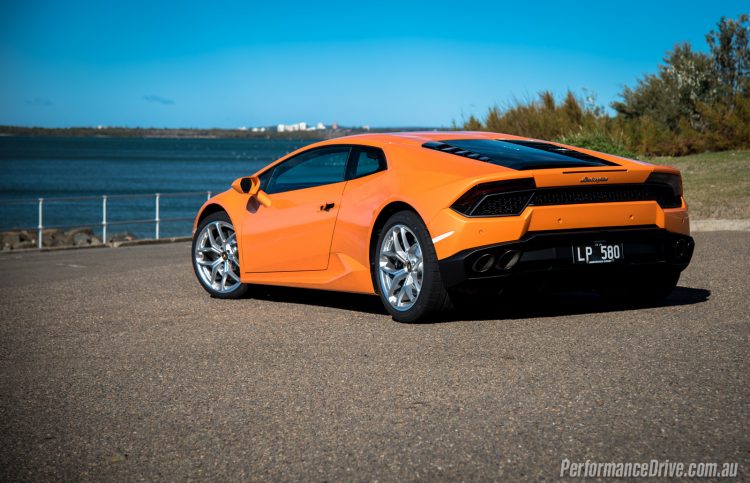 Unfortunately, Lamborghini doesn’t fit its iconic scissor doors to its entry models; for that level of extravagance you’ll need the Aventador V12. Even so, opening to the Huracan’s insides is a pretty special experience. You’re greeted with two sports seats and a slopping dash fascia that features loads of futuristic shapes and enough switchgear to make it feel like an actual spaceship.

In this test car there’s a pair of leather seats in two-tone orange and black, with matching orange leather on the dash and door trims. We’ll hold off our comments regarding the colour combination here, but the best part is Lamborghini offers an almost infinite range of options for you. This means you can set up the cabin exactly how you want it. It is worth keeping in mind the nature of this car. In other words, we wouldn’t go for a boring grey exterior with black leather. This is a Lamborghini, after all. If you’re thinking of buying one, we’d recommend getting excited about it and putting together a fun combination.

Cabin space is relatively tight, especially if you’re tall, and the seat foam provides little cushioning. We’re sure Lamborghini can specify some comfy options if you desire, or, going the other way, it does offer more aggressive bucket seats too ($10,440). It’s a bit disappointing not to see any existence of carbon fibre inside. In fact, some of the dash above the glove compartment relates to the material used on fast-food trays. As we said though, almost everything is customisable at the time of ordering. 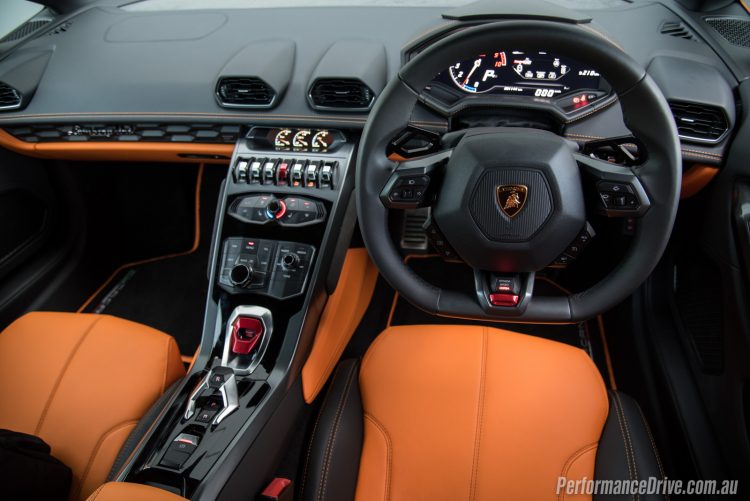 Most of the on-board media and navigation functions are controlled via the huge instrument cluster LCD screen. It does take some getting used to, switching between menus using the Audi MMI on the centre console and then looking up through the steering wheel. But it does keep your eyes up near the road.

There are some intricate details in here, such as the trio of little LCD gauges atop the main fascia, the metal toggle switches, and that start button is one master piece. There’s a red, metal safety latch over the button, like what you might see on a fighter jet. In our opinion, this is the kind of stuff that makes Lamborghinis so cool and stand out above the rest.

Cargo space is minimal, with no real storage behind the seats and only a small boot in the front. Doing without the front drive differential and driveshafts in the 610-4 doesn’t seem to make any difference to cargo space. 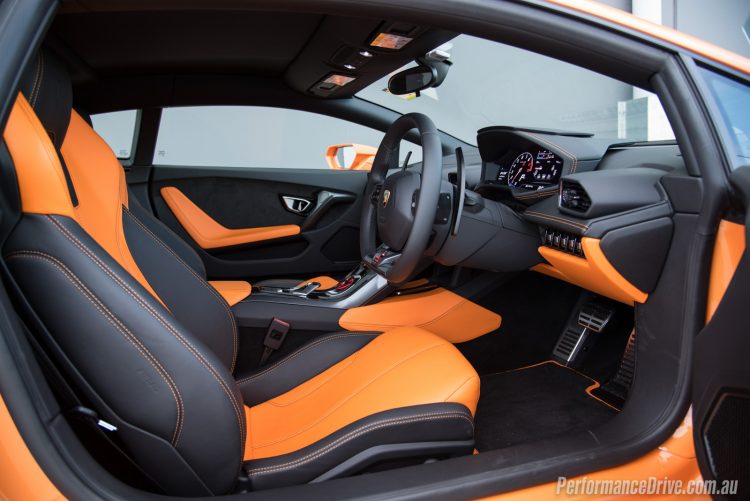 There are few moments in life that can replicate the intense excitement and heart-palpitating experience of starting a V10 Lamborghini. The starter motor whines and whirs like a classic Formula One car being spun into life. Then the almighty engine abruptly announces itself, shrieking and bellowing, and echoing off walls and buildings, and anything else that happens to be within a couple of hundred metres. The throttle response when idling is unbelievable. You just need to tap the throttle, like testing to see if a fry pan is hot, and it will violently burst out with a crisp, lively rasp.

Out on the open road the Huracan is surprisingly civilised… well, apart from the V10 engine lurking behind your shoulders. Lamborghini offers the driver three driving modes, and each of these set up all of the main controls accordingly. So, in Strada mode (Italian for street), the throttle isn’t at its snappiest, the gear changes (if left in auto mode) are very ‘normal’, and the exhaust valve is closed. It’s not that it’s quiet, but it is as relaxing as supercars get. If you nail the throttle it does open up and let out a traffic-shaking bark, though.

During our test we spent most of the time in the most aggressive Corsa mode (of course) and used the paddle shifters to change gear. Because, why not? In this way you can decide if you want to remain relatively discreet and change up soon, or if you’d like to leave the gear hanging and try and shatter some windows using the V10’s ear-pinching, high-frequency voice.

In terms of performance, the 580-2 is an incredibly quick car. It is down on power compared with the LP 610-4 as mentioned, but it is around 33kg lighter. Power-to-weight ratios do show the 610 is slightly better off. We’ve driven both and we really can’t notice the difference. Lamborghini says the 580 will cover 0-100km/h in 3.4 seconds, compared with the 610’s 3.2 seconds. At this level of speed and acceleration it is difficult to split. You would need to be a racing car driver or at least very, very used to driving supercars at full-throttle to tell the difference. 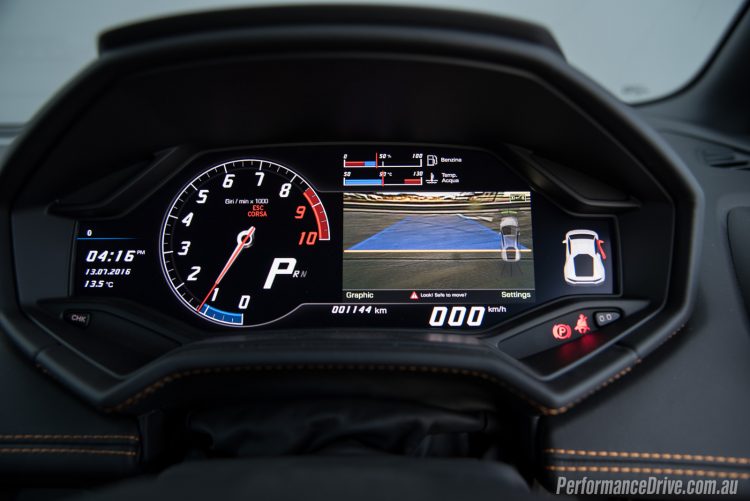 Using our VBox Sport, and using the standard launch control function, the best 0-100km/h we achieved was 3.54 seconds. Across the quarter mile it needed just 11.48 seconds, crossing the line at 207.6km/h. Again, these were the times we achieved on a private road. We think the launch control isn’t quite as quick as simply nailing the throttle, on a non-prepped surface anyway. There is a fair amount of wheelspin to contend with. On a proper, glass-like drag strip we think these times could easily be reduced, perhaps recording even quicker times than what Lamborghini states.

Gone are the days when supercars were quick in a straight line and then a bit of a handful in the bends. Down our usual mountain run the Huracan is insanely predictable, responsive, and fun. Front end accuracy is hard to keep up with if you’re not used to this level of performance. We think the front end is a touch more engaging without the weight of the driveline compared with the all-wheel drive 610-4. The steering isn’t as weighty and it doesn’t load up under power. Understeer also seems harder to come by. Not that the 610-4 is a pig. In fact, the 610-4 is, understandably, more sure-footed in the bends, especially under power. Whereas in the 580-2, it can move around a little and even oversteer if you’re exuberant with the throttle too early in the corner. Matching the life-changing engine with go-kart-like pin-sharp handling, we’re sure you can imagine what this machine is like to drive flat-chat down your favourite road. It’s terrifyingly exciting.

Even though the official average fuel consumption is high, at 11.9L/100km, and even higher if you tend to enjoy the V10’s broad rev range more often than not, the 5.2-litre naturally aspirated unit actually offers an impressive power efficiency. In other words, the high fuel consumption isn’t going to waste; it’s making optimum use of the petrol you give it. Using the simple calculation of dividing the power output by the official consumption, the Huracan 580-2 spits out 35.88kW:L/100km. Compared with, say, the HSV GTS‘s power efficiency of 28.1kW:L/100km, you begin to understand how hard Lamborghini engineers must have worked to extract every speck of horsepower from each drop of petrol. 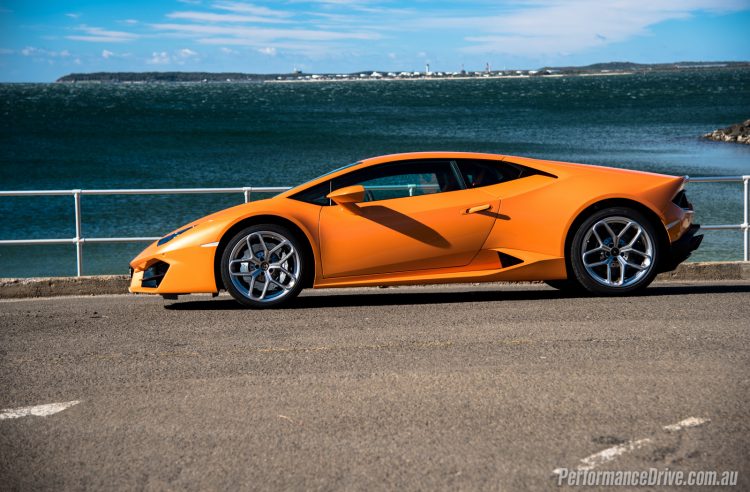 The Huracan might not be the quickest supercar around a circuit (although quicker than a Ferrari 458 Speciale around Nurburgring), or the quickest across the 0-100km/h sprint, this is a car that does what a supercar should do; it excites you. A lot. The naturally aspirated engine sound and progressive power delivery, the sensation of speed, the hints of German precision thanks to its VW Group parent company, and the interior and exterior design make it, in our opinion, the most appealing supercar in this price range.

Aside from the fact you can drift and play around in the 580-2, it’s also the most affordable Lamborghini. And it is still a proper Lamborghini. If it were our choice we’d go for this rear-wheel drive machine over the four-wheel drive brother, but that’s just because we’re a bit immature. If you’re after something (somewhat) sensible in the supercar world, the 610-4 is even quicker and will probably be enjoyed by a wider variety of drivers.

CONS:
– Infotainment screen behind the steering wheel takes getting used to
– Some cheap plastics inside