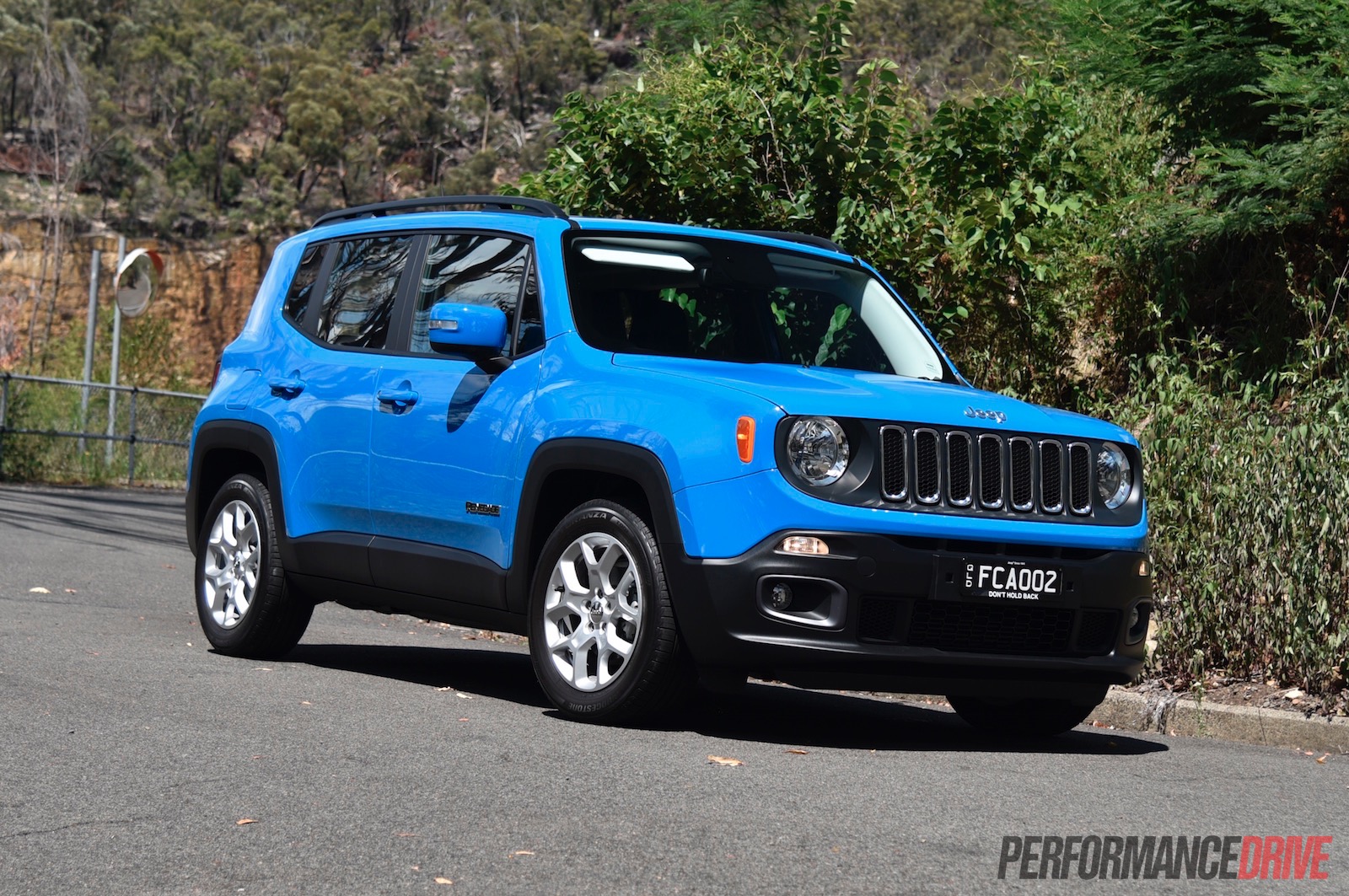 The compact SUV market has absolutely exploded in the last 18 months. Sales have jumped, and manufacturers have had no choice but to jump onto the bandwagon. We’re here to find out whether the new Jeep Renegade is a competitive offering in an already saturated market, or just a rush-job in order to secure Jeep a slice of the pie. 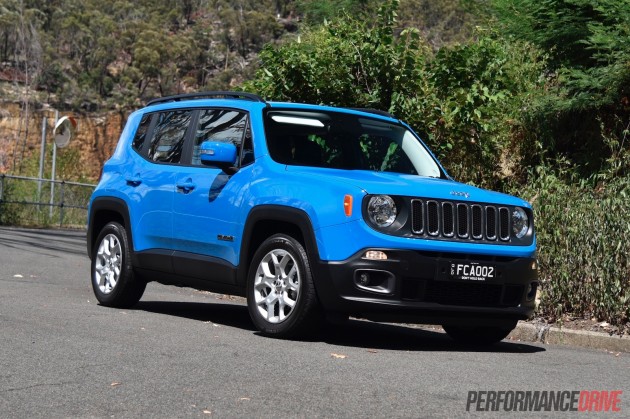 Jeep’s Renegade is broken up into four offerings for Australia. The base Sport model is available from $29,500 and comes with a 1.6-litre engine and a six-speed manual transmission. Stepping up into what we have here, the $33,000 Longitude, upgrades to a turbo 1.4-litre MultiAir Fiat engine, mated to a dual-clutch auto transmission.

The $38,500 Limited variant is fitted with the same powertrain but comes with more equipment, and the top $41,500 Trailhawk adds a 4WD system and is powered by a 2.4-litre Tigershark engine. All models except the Trailhawk are front-wheel drive. 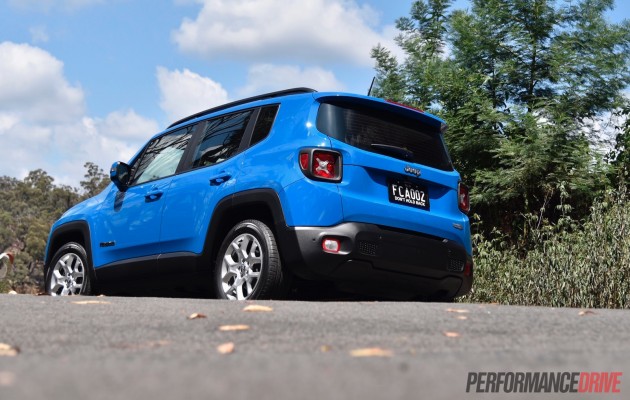 Approaching the Renegade from a distance, it looks very much like a Jeep. The traditional seven-bar vertical grille and round headlights signify all the traditional Jeep ingredients. Jeep has placed a number of ‘Easter eggs’ around the cabin to remind you of its heritage as well, including on the speakers, rear-vision mirror, windscreen, tailgate, and centre console.

Take one walk around the car and you can see the front and rear bumpers are made from a bland black plastic (like some base model versions of the rivals). We feel these take away from the aesthetic appeal. These parts are likely to prove affordable if they need replacing after minor bumps and dings when parking though. Perhaps our review car, finished in bright blue, isn’t the best colour to admire the Renegade’s design qualities. Black would be more flattering as it would disguise these elements.

Jeep’s styling on other models works because the vehicles are usually taller, more intimidating and have some serious road presence about them. The Renegade, on the other hand, is smaller than it seems in images and makes the bold styling and rugged personality seem a little obscure and fake. 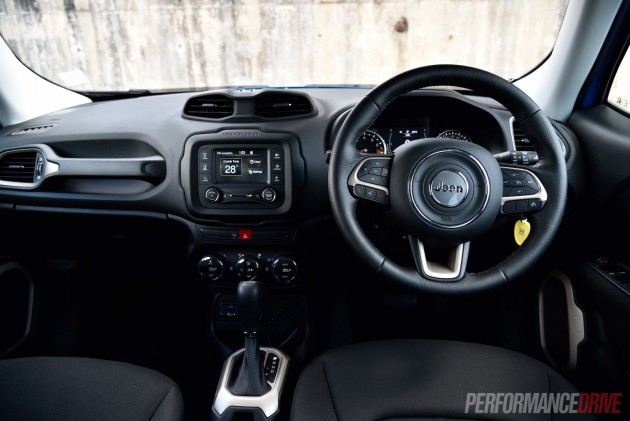 Moving inside, the look of the cabin is somewhat soured by the use of more scratchy plastics. While it’s hard to make an affordable interior without the use of such material, other manufacturers seem to at least hide them away, or break them up with premium-like textures.

Not in the Renegade though. The same plastic covers the door sills, the dash, down through the centre console and around the gear lever and through to the cup holders. This wouldn’t be a big gripe of ours if we were talking about a car in the $20-25k area. But the Renegade will set you back $33,000 (excluding on-roads) as mentioned, putting it in line with some highly reputable rivals.

The flip side of this however is that you don’t need to wipe off your boots before climbing aboard. The Renegade will take more punishment than a luxurious interior, and the cloth seats are significantly more family-friendly featuring a robust upholstery in the Longitude. The Jeep’s interior ties into what is an undeniably utilitarian setting, which seems somewhat contradictory in a car which is, as we find out later, designed for the urban runaround.

An area where the Renegade does excel among its rivals is with cabin space. There’s loads of headroom in the front and back, with a very tall ceiling making the cabin atmosphere feel roomy, open and accommodating. Legroom is just as impressive in either seating row, with high-mounted seats providing everyone with perched up comfort. Cargo space, at 351 litres, does well to put rivals in their place. 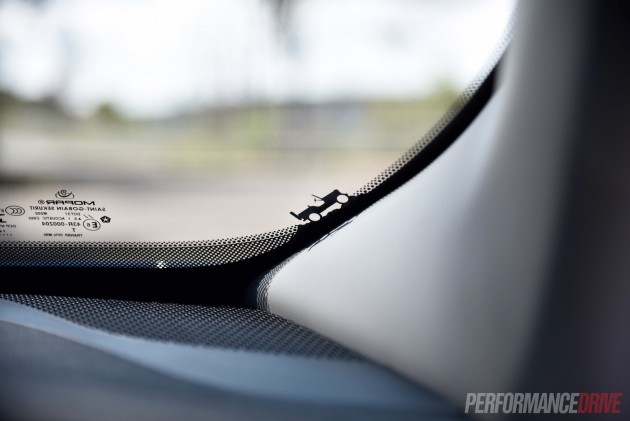 The tiny touch-screen (iPhone 6 is over an inch larger) becomes almost comical when reversing – you’d be better off using the reflection from a teaspoon. Fortunately, the Renegade is easy to park thanks to its modest proportions and tall MPV-like windows.

The MySky dual panel roof is a very different offering to what’s out there, and is sure to appeal to the youngsters and traditional Jeep (Wrangler) fans. The front panel can be automatically opened and closed like a sunroof, or manually removed just like the rear panel. Both fit into a specially-made case in the boot. The roof racks are also removable.

The Renegade shares its underpinnings with its parent company’s Fiat 500X, and contrary to what you might think, the Renegade is actually manufactured in Italy.

This all sounds exciting. But the first problem with the Renegade is, despite all the heritage stuff around the place and the utilitarian cabin, that it’s not really an SUV. There’s a low-riding front bumper which isn’t just a problem off road, it’s even a problem on driveways and over some speed bumps. Furthermore, if you really want to head off road, which we’re assuming you do if you’re considering a Jeep, you’ll have to fork out for the $41,000 4×4 Trailhawk variant.

Secondly, front-wheel drive versions offer a ground clearance of just 200mm (Trailhawk 220mm). This is easily overshadowed by even modest crossover rivals such as the Subaru XV (220mm). Again, the Renegade, at least in Longitude form, just seems more and more contradictory and confused the more you drive it. 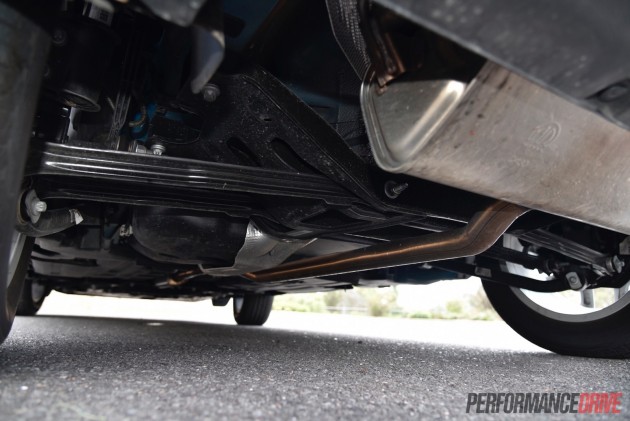 Another downside to the Renegade is the ride quality. It is needlessly firm compared with most rivals. It’s not quite uncomfortable, but the suspension doesn’t cope well with Australia’s harsh conditions. Even minor irregularities around the city will transfer and vibrate into the cabin. If this were an off-road-focused vehicle, it would be tolerable.

Also, and maybe this is a niggle isolated to this press car, there were significant creaks and rattles from the plastic roof pieces which were only made worse by the ride quality (you can hear the rattles in the video below). We were told the roof hadn’t been stored properly on a previous test, which may have caused the roof piece to buckle slightly.

It’s turning out to be a fairly negative experience then, the Renegade Longitude. Is there anything we do like? Fiat’s 1.4-litre turbocharged four-cylinder engine is good. Both 103kW and 230Nm come on relatively smooth and strong. There’s plenty of low-down torque, with the peak figure coming in from just 1750rpm. It’s not fast, with 0-100km/h coming up in 10.54 seconds, but around the city the power delivery is responsive and very handy for darting along in traffic. Roll-on acceleration is credible too, with the capability of exiting roundabouts in third gear.

Fiat has been building eco-focused engines for decades, so it comes as no surprise the 1.4 is economical. It offers an ADR average of just 5.9L/100km. During our test, we were returning figures of around the 7L/100km mark, in real-world conditions. This is impressive for a crossover/SUV. 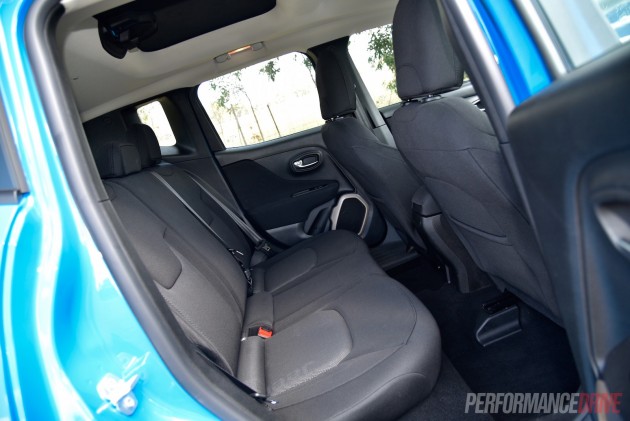 If the Renegade were priced different, the tone of this review may well be different. However, objectively speaking, we can’t look past the cheap and nasty materials used here, or look past the somewhat confusing personality and say this particular variant is worth your money.

The Renegade might be the right car, but it’s in the wrong price bracket. Ultimately there’s some areas to like, and we’ve tried to be empathetic, but if you’ve just handed over $33k for this Renegade you obviously haven’t test driven anything else in this space.

It is such a shame a company that has been building SUVs since 1941 can’t come through and blow every other SUV in its class out of the water. We were expecting better of Jeep, but instead this is clearly a product that has been designed by accountants to fill a space in the market. Maybe Jeep needs to take a look at what the Japanese and Koreans are doing and stop wasting time with all of this heritage stuff?