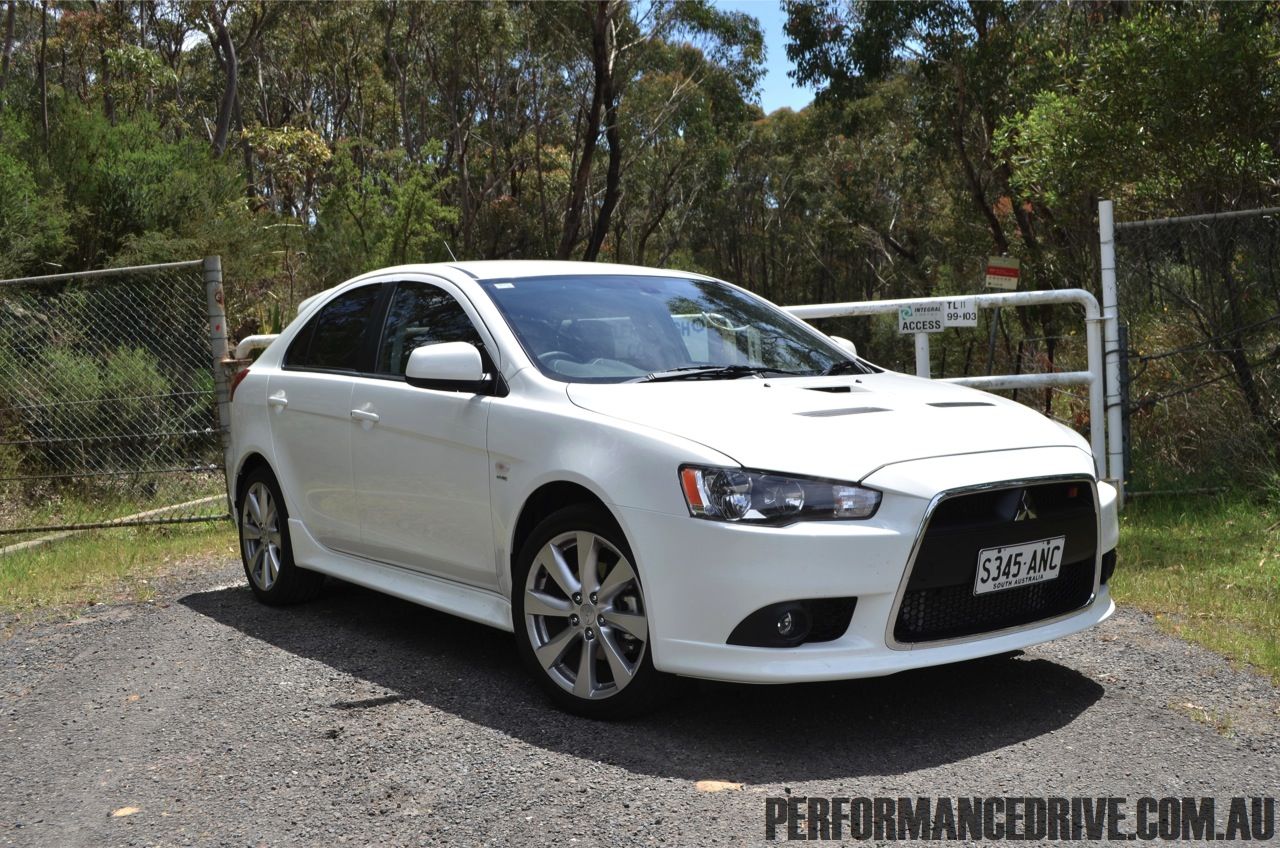 Always been a fan of the Mitsubishi Lancer Evolution but could never persuade the wife that it was ‘practical’? Meet the 2012 Mitsubishi Lancer Ralliart Sportback. It has all the sensibleness you could ever need in a car; luggage space; room for five people; and four doors. And its greatest feature? A drivetrain that has Evolution X written all over it. Brilliant. 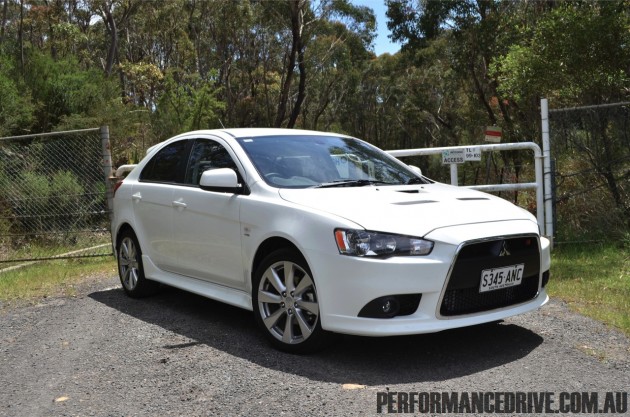 The 2012 Mitsubishi Lancer Ralliart Sportback is a wolf in sheep’s clothing. There is no other way to explain it. Underneath the VR-X-like appearance lies a drivetrain that’s the result of two decades worth of development.

While the Ralliart doesn’t have the Evolution’s Super Active Yaw Control, and is slightly down on power (177kW compared with 217kW), don’t think for a second that it isn’t a blast to drive. It’s very Evolution-like. And it’s $18K cheaper. 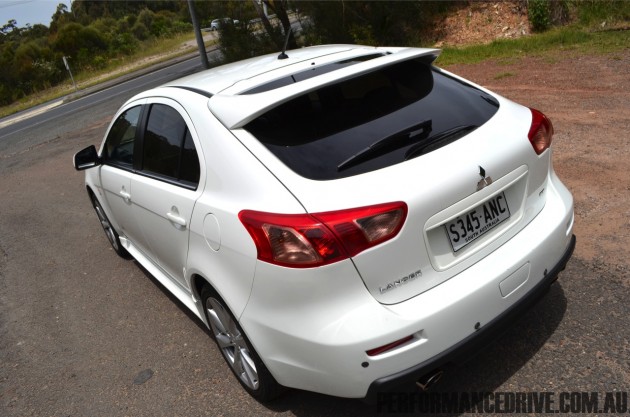 We took the 2012 Lancer Ralliart Sportback out for a day of trial and tribulation to some local mountainous (tarmac) roads to find out just how much of a performer it was.

Right away, you know it has Evolution in its roots. There’s that inherent on-rails character. As we pushed it more and more, the all-wheel-drive system allows it grip like a cat on a scratch pole.

Through the corners you can hold a tight line, and if are game enough to push the Ralliart beyond its limits, the factory active stability control and active traction control will cut in and do its best to keep you on the straight and narrow. 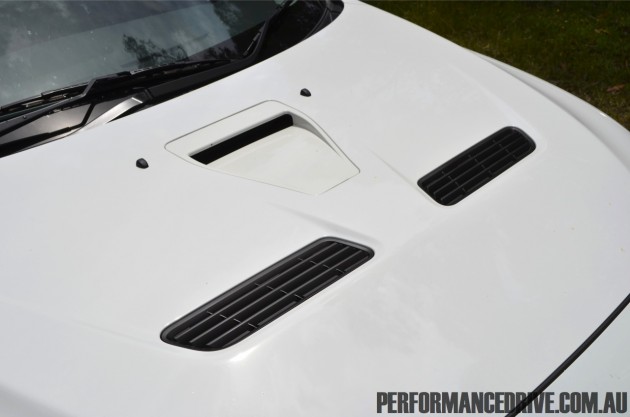 The turbocharged 2.0-litre 4B11 engine eagerly builds torque from down low in the rev range, resulting in that freight-train pull turbocharged Mitsubishis are known for.

The turbocharger on the 2012 Lancer Ralliart Sportback features a titanium wheel, thus helping the Ralliart to be almost lag-free. The instant you demand power, it pushes boost into the engine, with response like its supercharged. We get the idea that the engine is up to just about any task you throw at it, be it hills, bends, or straight-line acceleration. It’s a battler. A thoroughbred. Much like its Evolution brother.

And then there’s the gearbox. Like the Evolution X MR, it features the Twin Clutch Sport Shift Transmission (TC-SST). There’s six well-spaced cogs to sift through. You can opt to leave it in automatic mode, or use the paddles mounted on the steering column. 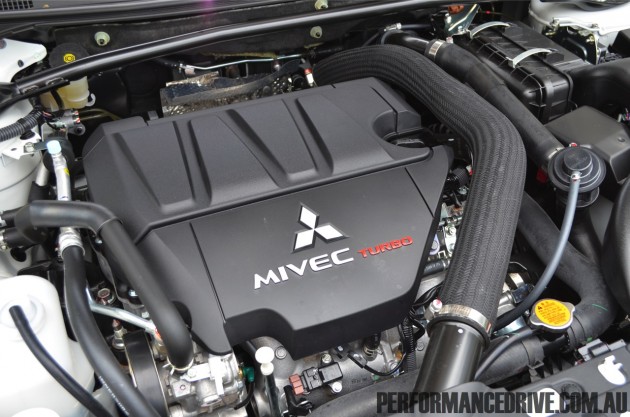 Like all dual-clutch transmissions, the TC-SST uses two input gear shafts; one that carries 1st, 3rd, 5th and reverse ratios, and the other with 2nd, 4th and 6th. This allows the gearbox to preload the next gear in advance. Whenever a gear is selected, it’s simply a matter of the electronically controlled twin wet clutches swapping from one shaft to the next – essentially, you’re getting cog swaps in the time it takes to drop a clutch in a manual (under one second).

There are two console-mounted settings which you can select with TC-SST. There’s Normal – which is the default setting used for day-to-day driving with fuel efficiency and smoothness in mind – and Sport – which is there for when you feel like driving with enthusiasm, offering improved accelerator response and faster gear changes, and when driven in automatic mode, gears are engaged at higher revs while downchanges are made once the revs drop below around 3500rpm.

The turbocharged MIVEC 2.0-litre all-alloy engine found in the Lancer Ralliart is a great engine, but it’s not a terribly great-sounding contraption. The bassy tune from the 4G63 that you may know is replaced by a more shriek-ish (arcade game) sound. What happened to that old fist-pumping, rumble and thrust sound?

Another red mark against the engine is the fact that it does like a drink, just like in the Lancer Evolution. During our test the car averaged 12.7L/100km, while the official rating is 9.8L/100km. The economy is less than ideal, even though it offers cracking performance, there are other cars around that offer equal acceleration while using less fuel. 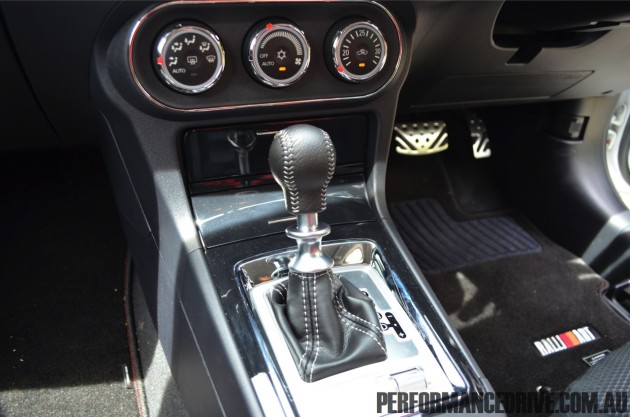 The 2012 Mitsubishi Lancer Ralliart Sportback feels very natural to drive at speed. The steering is very well weighted during quick direction changes, and there is no sign of understeer on corner entry, only on exit if you push the go-pedal a touch too much.

The Ralliart’s ride is a nice compromise for comfort and sporty driving, with an inclination to be more firm than soft. It soaks up lumps and bumps well, and stays composed when travelling over undulated surfaces. Whereas the Evolution is an absolute butt-full of torture, the Lancer Ralliart has the everyday person in mind, and doesn’t throw your back out at the sign of a pot hole.

The Ralliart’s brake pedal proposes some serious confidence, much like the engine. While you can get some serious deceleration from downshifting via the flappy-paddle ‘box, the brakes are always up to the task. There’s no apparent brake fade, just face-peeling stoppage. 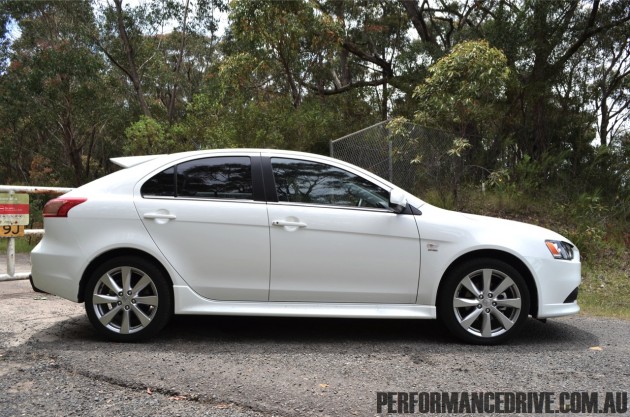 One of the Ralliart Sportback’s forte is accommodation. While boot space is actually down compared with the sedan (400 litres vs the Sportback’s 288 litres) you have the option of folding the 60:40-spilt seats down for extra room (1349 litres). The extra space is very useful should you want to carry band equipment, or buy a new TV.

Trim in the 2012 Lancer Ralliart is very suave. The seats are covered in a nice-to-touch black and grey mesh material. The front seats aren’t anything like a pair of Recaros you get in the full-blown Evolution, but they do a liberal job of keeping your upper-body supported. 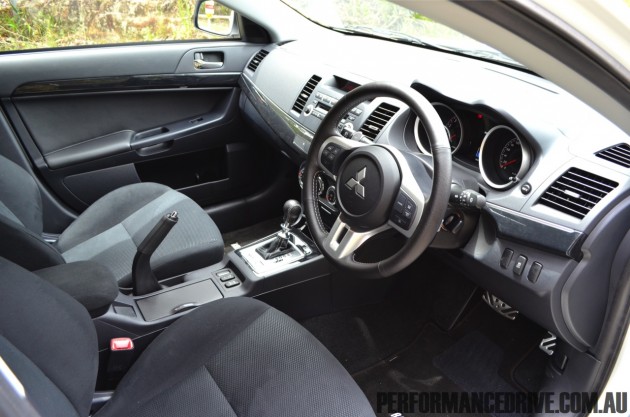 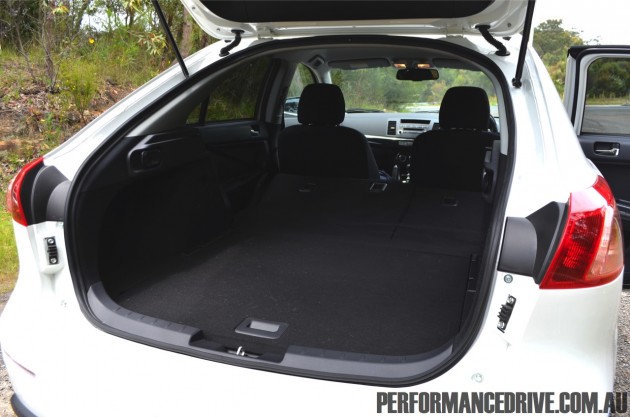 For us, the Lancer Ralliart is right up there on our everyday owner’s car wish list. Its cool factor is well above the normal level, and the respect you get from other all-paw Mitsu’ fans makes you feel apart of an exclusive club.

Its tuning potential is huge, too. With just a few upgrades, the Lancer Ralliart could easily spit out well over 200kW at the wheels, or enough to make mince meat of your Subaru Impreza WRX rivals.

The Ralliart is a much easier car to live with everyday compared with the Evolution. The ride, while still firm, isn’t going to break your back, and chances of you being targeted by police is minimal compared to it’s more serious bigger brother, thanks to its sedated appearance. 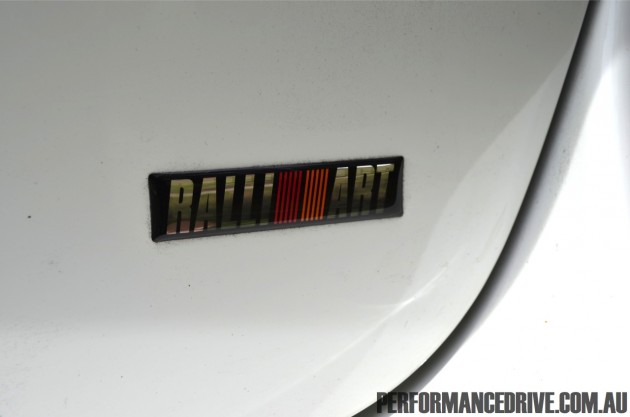 It’s a well-groomed car with the driver in mind. Yet in this Sportback form, it gives you the ability to carry out a very diverse lifestyle. Should you buy one over a WRX? The Lancer Ralliart is a slightly more refined vehicle, with more technology, and it’s easier to drive at the limit. If these things are important to, we suggest the Ralliart. And if practicality is up there in your checklist, there’s even more reason to go the Mitsubishi. However, if you can’t get enough of that boxer throb, the Subaru wins in the sound department.

PROS
The idea of having a hatch with all-paw Lancer Evolution tech, grip, easy to live with, understated looks

CONS
Fuel consumption, TC-SST can be confusing at times