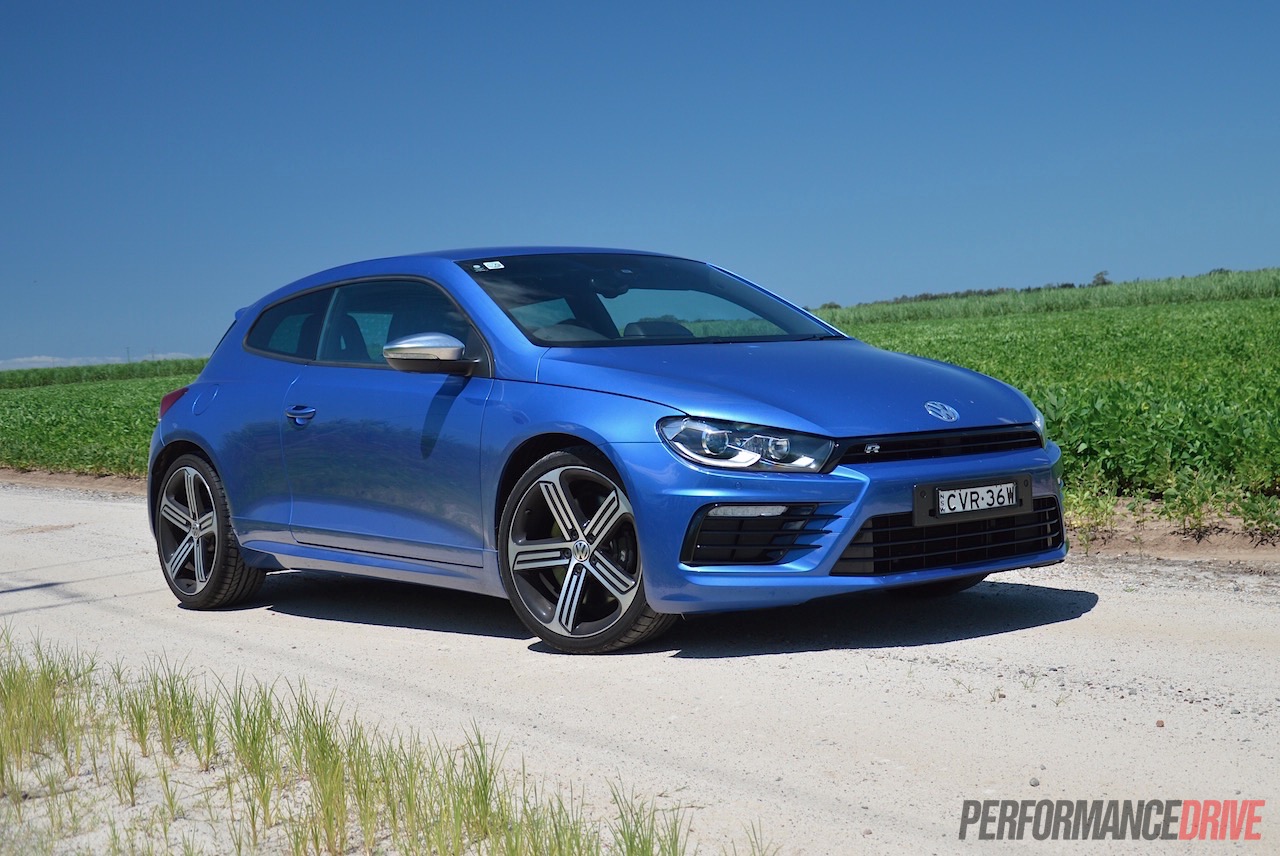 The Volkswagen Scirocco R is getting a bit long in the tooth now, after being initially released back in 2009. It has just been given a facelift though, so maybe the 2015 update can help it hang onto its youthful nature? 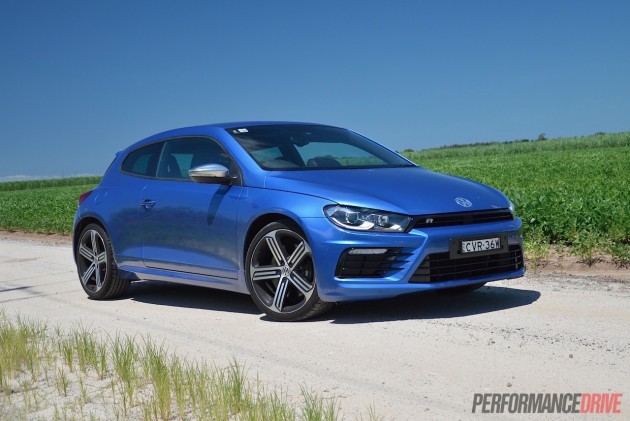 The Scirocco R is the only variant you can get in Australia, although there are less-potent and even diesel versions available in Europe. Some revisions have been made for the 2015 model to freshened it up, including a slight adjustment to the engine’s management system which opens up a wider torque band.

Under the bonnet sits a 2.0-litre turbocharged four-cylinder engine running up to 27.5 psi, developing 188kW at 6000rpm. Only now, the max torque figure of 330Nm is available from 2400rpm to 5200rpm – instead of from 2500rpm to 5000rpm. This means cross-country performance and overall tractability is improved.

The power output might not sound like much in today’s high-tech world, but it does stand up nicely against other front-wheel drive hot hatches such as the Ford Focus ST (184kW), the Renault Megane R.S. 265 (195kW), and the Alfa Romeo Giulietta QV (177kW). Buyers can choose between a six-speed manual and six-speed DSG auto. 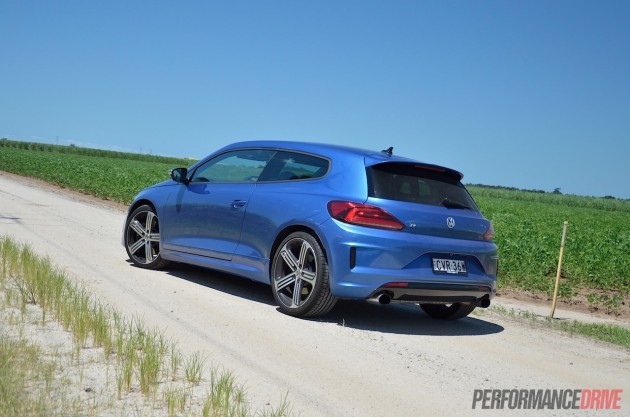 From the outside the exterior still looks quite modern in our opinion. The low-slung roofline and sporty coupe-like hatch at the back gives it a real fat and muscly stance, especially when you see it in the metal. Volkswagen has given the 2015 model some new bumpers bars, including a more defined front end and the addition of neat little (fake) vertical vents at the back. There’s also 19-inch wheels borrowed from the Golf R and a new bonnet badge stuck on at the front.

Inside, it’s a different story. We think the design is a little old now, and the use of hard scratchy plastics around the glove box and centre console don’t seem to line up with Volkswagen’s improved quality it offers today. The touch-screen system is carried over, although the update sees a rear-view camera and sat-nav as standard. Resting atop the dash is a trio of gauges, not previously offered, including a cool boost gauge which you can watch as you try to get the needle to go beyond 2.0 bar.

Cabin space is decent for a sports hatch, with pleasant headroom and legroom in the front and enough storage pockets and little caves to keep your things. In the back it is a bit tighter, obviously, with only two seats. But there is a surprising amount of headroom for such a sleek external roofline. Rear legroom really depends on how tall the person in the front is. The boot space is reasonable too, but if you can afford to knock the 50:50 dual back seats down you open up an impressive 1006 litres.

Although there is definitely no shortage of power or torque – as you can read about below – 188kW doesn’t seem like a high enough output anymore to warrant the need for expensive 98 RON fuel. The other main gripe we have with the overall package is the firmness of the sports seats. Yes, they are very supportive in the corners and they are covered in a high quality, hard-wearing Nappa leather, but the cushioning is rather stiff. This could be subject to this test car only though as it has just 4000km on the clock. 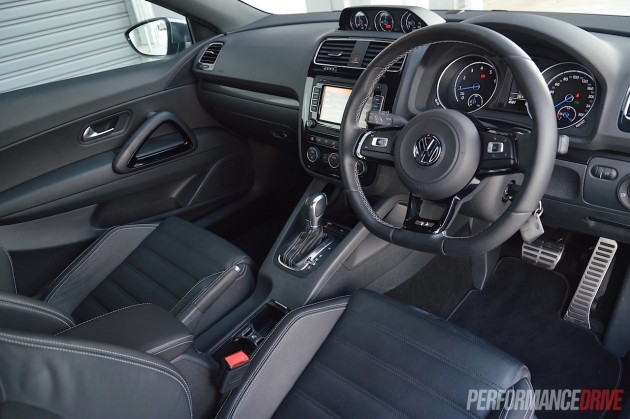 In a world where cars are becoming lighter in weight and more versatile, the Scirocco R remains as a bit of an old-school, single-purpose vehicle. On your first drive you’ll notice the car does feel heavy and firmly planted on the road. The steering has a reassuring yet manly feel to it, and the turning circle is tight. Also, you might have to get used to the DSG transmission if you’ve never used one before.

The thing we love about all this is that it feels exciting and theatrical, even just popping down to the shops. It might look like nothing more than a sporty hatch, but make no mistake, it’s a real ‘man’s hatch’.

At pace the front end tends to load up and feel quite heavy. Unfortunately, the steering isn’t all that engaging or enthusiastic. We can partly put the blame on the fact this car is based on the Mk5 Golf, which went out of production in 2009.

When you really start to wrestle with it out in the mountains, it responds and always remains committed to the corner. There is no notable understeer, even when accelerating through the bend. This can be contributed to the electronic locking differential which organises power distribution between the front wheels, leaving no slip at all. As for oversteer, it really only comes into play if you do something silly – jump on the gas and it’ll instantly pull itself straight.

From point to point this is an incredibly quick machine. If you’re keen and really want to punch through a section of road, it will provide you with more than enough speed. It remains as one of the meatiest and quickest hot hatches around in our opinion. It’s also one of those cars that you’d just love to take for a flat-out lap on the Nurburgring, or any track for that matter, charging up through the gears and listening to that rally-car-like pop and burble from the exhaust.

If it were our pick we’d go for the DSG auto without taking a second thought. It is astonishing how quick it changes up gears, and it responds immediately when you want to change down. It’ll hold gears all the way to redline too, if that’s your thing. We timed 0-100km/h in 5.8 seconds – a quick time even by today’s super-hatch standards. There’s no doubt the Scirocco R is still an extremely quick and thrilling front-wheel drive hot hatch, despite its age. 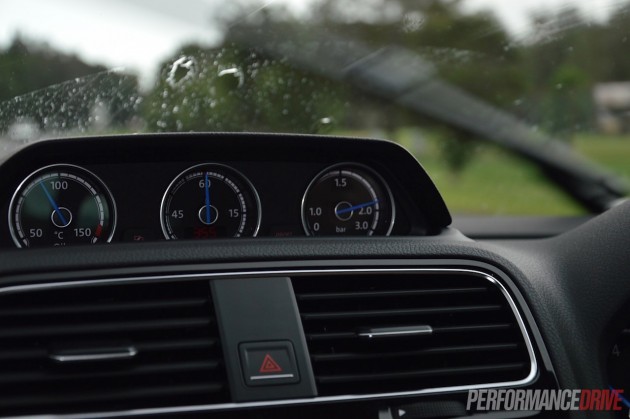 For us, it’s simply the fact that some very good cars are coming out these days that can trump this, including its younger cousin, the fantastic all-wheel drive Golf R, which is priced not too far from this. In order for the Scirocco R to continue to be a threat to the newer-age rivals it does need some chassis refinement, a more modern engine that’s perhaps not so tightly strung, and an improved interior. Volkswagen hasn’t announced any official plans for a new model yet, which means this could be your last chance to grab an example of VW’s sports car heritage while it’s still new.

If you’d like more of an idea on how this car drives, you can check out our point-of-view review which is on the PDriveTV YouTube channel right here. 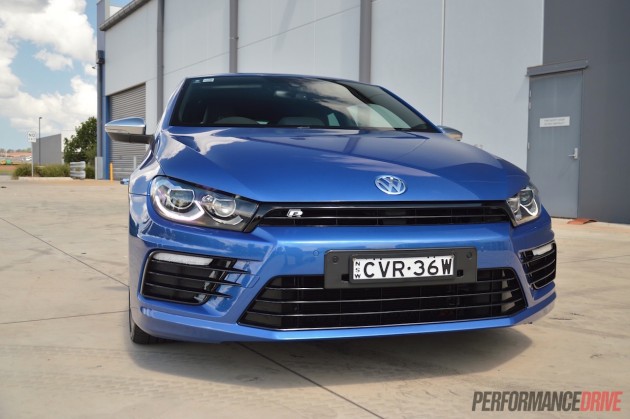