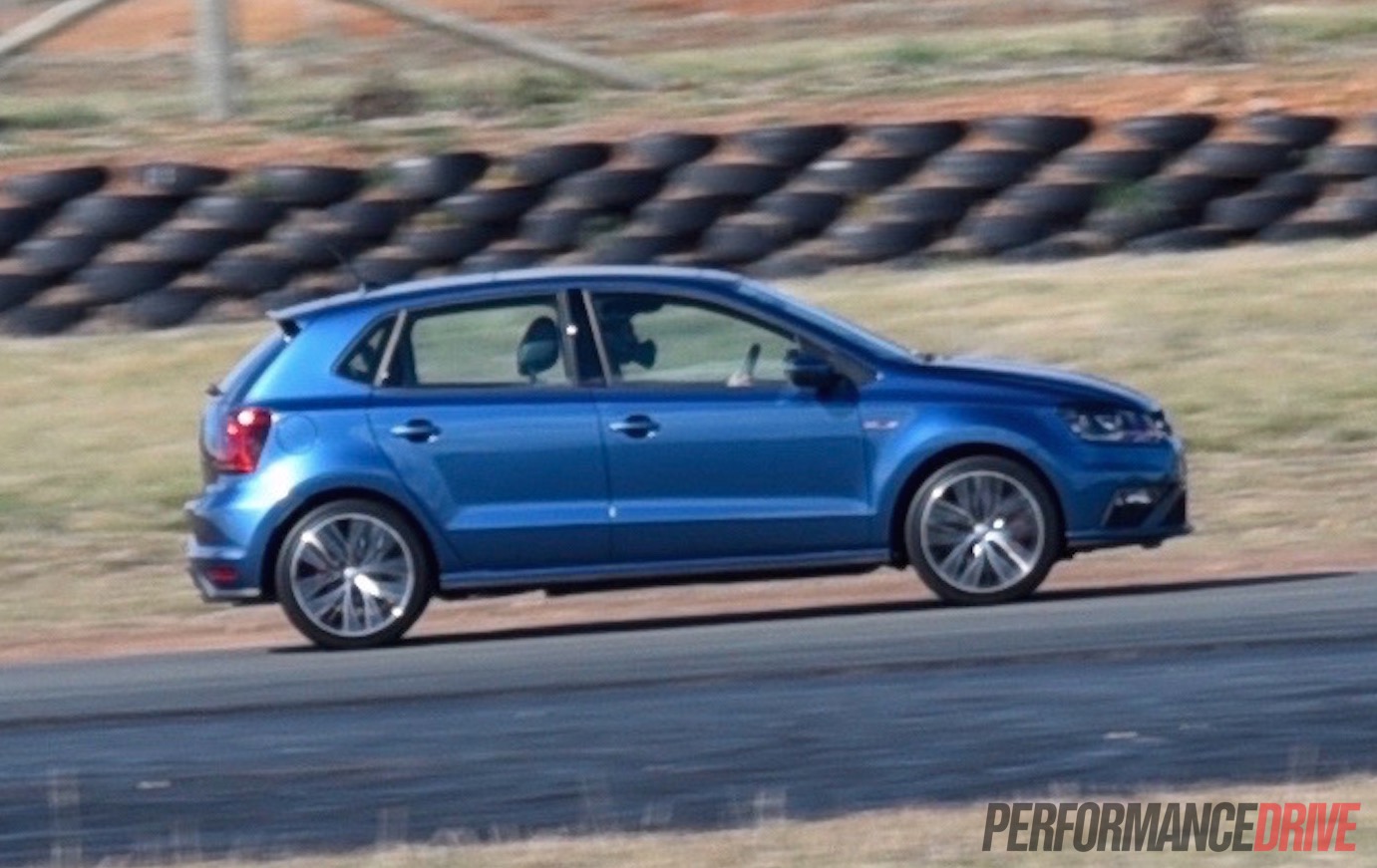 A couple of weeks ago we tested the manual version of the new 2015 Volkswagen Polo GTI. We loved it so much we just had to try out the DSG version. Manual transmissions might be a dieing breed but is it too early to sweep aside the fun and interaction of the old-fashion ‘stick shift’ and clutch pedal? 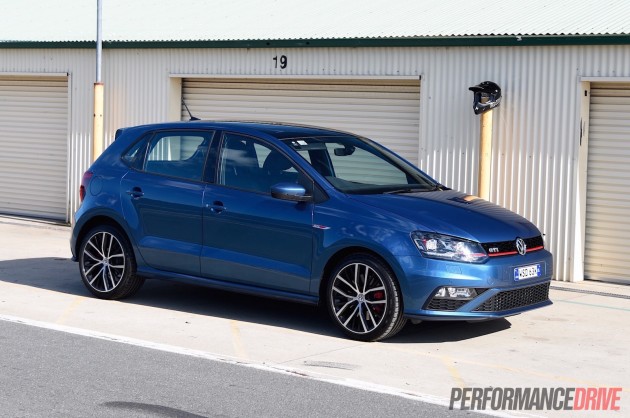 Volkswagen is offering the latest Polo GTI with both transmission options this time around – the previous version came only with the DSG in Australia. Also new to the mix is a 1.8-litre turbocharged engine, replacing the angry little 1.4-litre turbo and supercharged unit in the predecessor. Power is up only 9kW, however, torque is up 70Nm for the manual. Strangely, the DSG model is restricted to 250Nm, equalling the old model.

We already know the Polo GTI is a great everyday hot hatch, offering a practical cabin, a high level of standard features, and decent economy. For this review we’re going to concentrate on the feisty hatch’s track potential. Is it a suitable track day car? How does the new engine compare and is it fast enough? And should you go for the manual or auto? We’re here at Wakefield Park Raceway to find out, thanks to one of GP EXEC’s private track day experiences. 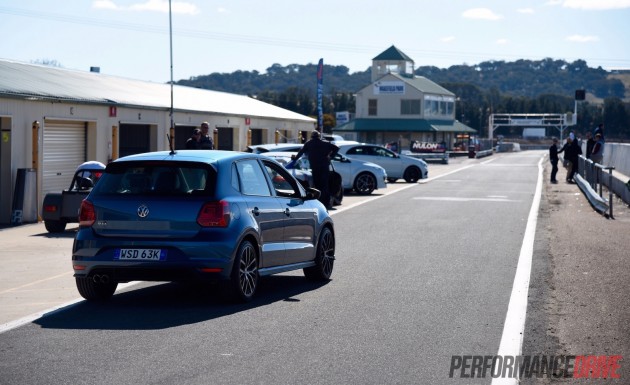 Is it a suitable track day car?

Surrounded by high-powered V8s and super-hot fours, the Polo GTI can seem out of its depth. But a track car is not all about how quick it can lap a circuit. It’s also about how much enjoyment is presented, along with the engagement and feeling that you are doing the driving and not the car. Longevity and reliability of the components also plays a big part in determining a good track day car.

The fun and interaction part is definitely extremely high here. With a pure and progressive steering setup you can really get involved with the finer chassis dynamics and make finger-tip adjustments to the car’s balance, inducing or controlling understeer and oversteer. There is some body tip or body roll, allowing you to throw the weight around.

Disappointingly, the GTI doesn’t come with a limited-slip differential. It does get the company’s XDL locking differential, but this only engages at speeds up to 40km/h. Fortunately for DSG buyers though the lower torque output does seem to provide a better balanced delivery compared with the 320Nm manual version. There is still plenty of inside wheel wheelspin to contend with in the DSG. This can be fun if you like that sort of thing, but it isn’t good if you want to post quick lap times. If you’re planning to use the car for track days we’d suggest upgrading the tyres as the standard Continental ContiPremiumContact 2 hoops squeal and screech a lot, making understeer more prominent when you’re really pushing it.

To address the longevity aspect, the Polo GTI performed without fault for the entire day on the track. The brakes can get a bit smokey if you don’t give them enough cool down time, but the stopping power remains surprisingly intact. We did notice the pedal dropping a little after a number of repeated hot laps. In this case it’s simply a matter of adjusting your foot movement to achieve the same desired deceleration rate. The rest of the car, including the DSG transmission and the engine, remained consistent the entire day. Overall, it is a suitable car to take to a track day. You might even surprise a few other track-goers too thanks to its sheer speed and agility. 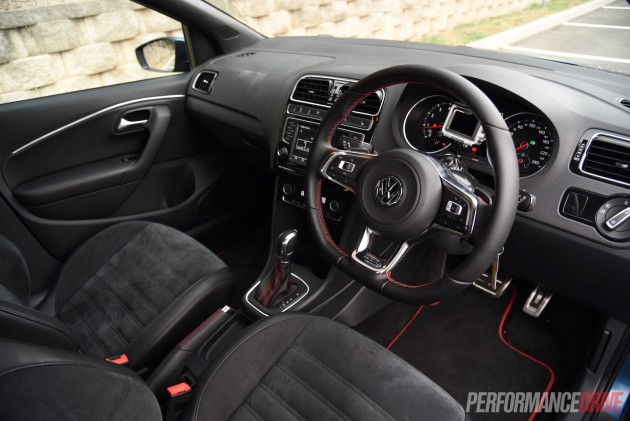 How does the new engine compare and is it fast enough?

In terms of speed, the 2015 GTI is quick. Very quick. We posted a best lap of 1:15.54, which, rather interestingly, is almost a second quicker than what we achieved in the Toyota 86 GTS manual. It also beats the Hyundai Veloster Turbo manual (1:17.5). The new 1.8 engine is very smooth and linear, with strong torque from low revs. This obviously contributes to the lap performance.

Higher revs help it retain some of the anger of the old 1.4, although we think the engine does sound quieter. This might be due to the track atmosphere and other cars drowning out the noise. Holding the gears all the way to redline does result in impressive top end. We topped out at around 168km/h down the main straight, which is fast indeed for a compact hatch like this.

It would have been nice to test drive the old 1.4 back to back with the new 1.8 to see which engine is more enjoyable on the track. There’s no doubt the 1.8 is more powerful though, with a wider power band allowing you to pull away from corners in a higher gear, carrying speed through and out from the apex. Peak power is available from 5400 to 6200rpm in the 1.8, as opposed to peaking at 6200rpm in the 1.4. Torque is also wider spread, providing maximum output from 1250rpm to 5300rpm in the 1.8 DSG, compared with 2000-4500rpm in the 1.4 DSG.

Flat-out acceleration is quite similar between the two model years. We timed 0-100km/h in 6.7 seconds in the new DSG. We have timed 6.3 seconds in the slightly lighter (1189kg vs 1242kg) previous 1.4 DSG model. Mid-range acceleration and low-end pickup is noticeably better in the 1.8 though. So to answer the question, is the new 1.8 fast enough? It seems a touch slower on paper but in the real world it offers a wider range of performance and capability, and it is definitely more flexible in day-to-day conditions. 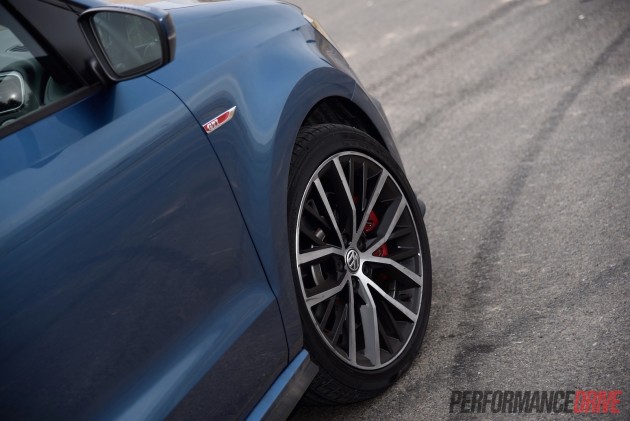 Should you go for the manual or DSG?

This is probably going to be your main concern just before you sign the dotted line to purchase a new GTI. We love dual-clutch gearboxes. From a pure performance point of view, they are an exceptional piece of engineering. BMW M and Ferrari use them. And in the GTI, it is perfectly suited to zipping around the track. It changes up gears quicker than you can blink, while offering seamless downchanges accompanied by a neat blip of the throttle.

If it were our choice we would go for the manual. We love the monster torque. It does spin a lot of the torque away but in our opinion, that’s what makes it so much fun to drive. Volkswagen vehicles are usually very conservative. The manual Polo GTI bursts out of that mould by proving it can let its hair down and get a bit wild. It is also quicker covering 0-100km/h (6.2 seconds) according to our stopwatch, mainly because it can hit 100km/h in second gear.

The downside to going with the manual will probably arise when you go to sell it. More and more buyers have an auto-only licence, which could mean it will take longer to sell a manual version. The manual also presents a higher official average fuel economy, using 6.1L/100km compared with 5.7L/100km in the DSG. Either way, you’re going to enjoy the GTI immensely. It is a fantastic little car and it’s still the benchmark in overall practicality, performance, and efficiency in our opinion.

Take a look at our quick track test video below for more of an impression on how it drives, and see our usual 0-100km/h and engine sound video further below for how it goes. For more information on the GTI from an everyday car perspective, see our previous review with the manual transmission. 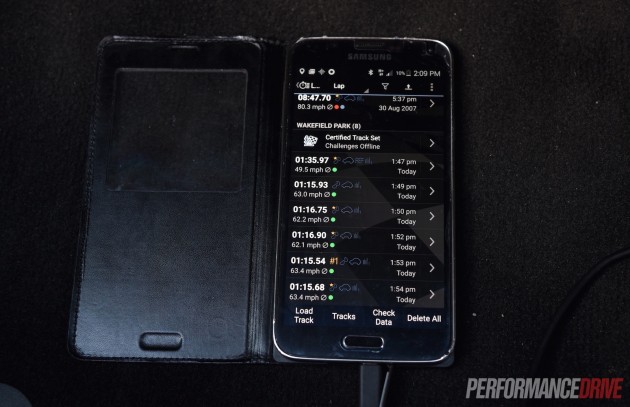