In many ways the 2014 Kia Cerato Koup Turbo is a coming of age for the Korean carmaker. It’s Kia’s first true crack at a decent sports car, and at first glimpse it shares many qualities with the vehicles it is designed to compete with. 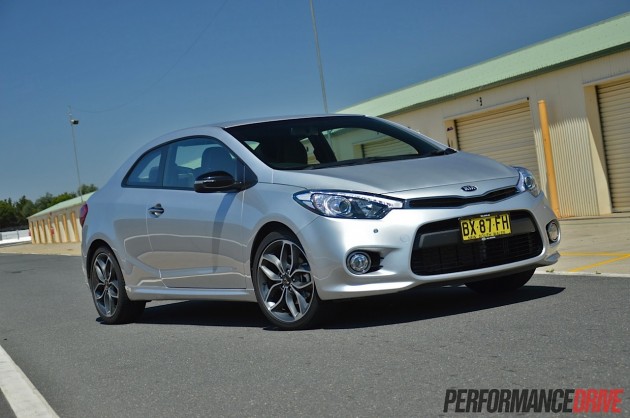 This is the second generation of the Cerato Koup, replacing the original naturally aspirated model. The new kid on the block comes with a range of upgraded features and design tweaks to set it apart from its predecessor, including two engine options; turbo and non-turbo.

Speaking of options, the Koup comes in three model variations with the base model copping a 129kW 2.0-litre naturally aspirated unit.

This test car is the middle-of-the-range Koup Turbo with the 1.6-litre ‘Gamma’ T-GDI engine – also seen in the Veloster SR Turbo. It features intercooling, direct injection and a twin-scroll turbine. If you want more, there’s also step above called the Touring Pack with the same powerplant and a few extras.

All the updates means the Koup’s price has risen, with the six-speed auto kicking off from $30,190, or $27,990 if you prefer to change gears yourself. These prices put it in the direct firing line of some very tough competition, including brilliant little runners such as the Ford Fiesta ST, Toyota 86, and Volkswagen Polo GTI. 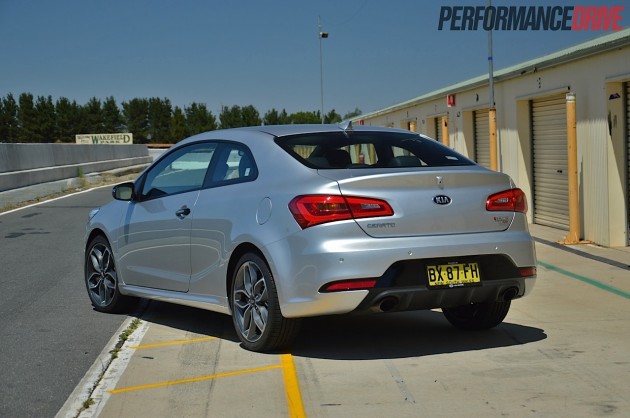 There’s no denying Kia has stepped up to the plate in the past few years in terms of car design and quality, and the new Koup is proof of that. It features a range of improvements that were first developed for the Cerato sedan, including an all-new body shell structure, tweaks to the electric steering, and revised struts at the front and uprated torsion beam rear suspension.

First up, the interior. You’re immediately met with a series of grey tones that stretch through the entire cabin, from the seats to the carpet and dash.

The faux leather seats have cloth inserts, which come in handy on hot days as they provide some breathing. They are well bolstered without feeling like you’re sitting in a bucket and can be easily adjusted to find a comfortable driving position. It’s possible to achieve a sedan-like driving position thanks to the extra space of the lengthened doors and front seat area, which is an added bonus for taller people.

The steering wheel feels smooth in the hands, with music and cruise control options all within a thumbs-length. The paddle shifters for the auto are perfectly placed in the middle of the wheel.

The main problem we find engaging with the controls is having to click the little buttons on the steering several times to turn up the music or scroll through the trip computer, instead of holding them up or down just the once. 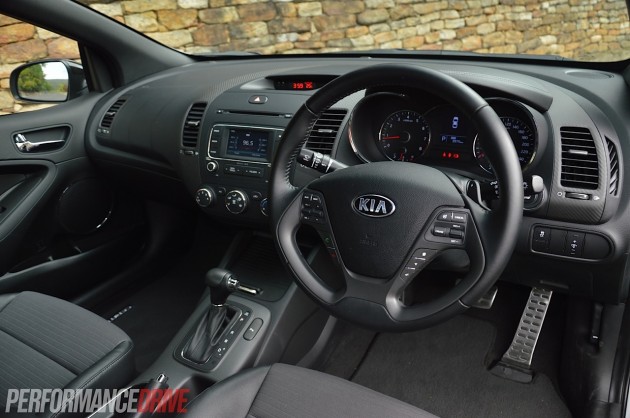 All other buttons are within a comfortable arm’s reach, including the glove box. A touch-screen monitor sits at the top of the dash fascia and has a bunch of buttons around it. The screen is quite small though and it’s difficult to select a radio station when driving on even the slightest of bumpy surfaces. Incorporating the surrounding buttons into the screen would have been a better design in our opinion.

The connection points for AUX and iPod are found in a compartment at the front of the centre console, which when closed looks like just another part of the dash. It’s good for security if anything is connected and saves you from having to hide things away all the time.

The boot has a 433-litre capacity, which is plenty of room considering it’s a coupe. If you need more space the rear seats can be folded down. Kia has revised the boot opening for the new model too, and it’s now 60mm wider for easier access.

The exterior is defined by its smooth lines flowing into sharp angles at either end. The result is an elegant yet sporty look. The bumper garnishes have a carbon-fibre look which is a bit tacky in our view, but most of the front and rear ends are accented with chrome surfaces. The wheels are 18-inch alloy items, which is great, but the design isn’t exactly our cup of tea.

Other features include the lights on the side mirrors that turn on when you unlock the car (borrowing from Range Rover). The mirrors themselves also tuck in next to the car when you press the lock button, which is cool at first but could be a problem if they fail in the future. 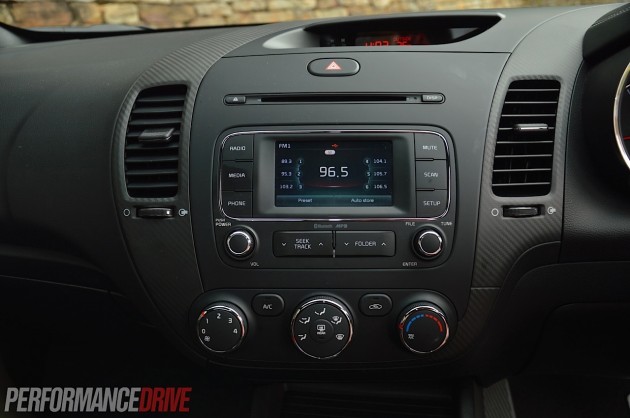 We had the joy of taking the Koup onto Wakefield Park race track to test its strengths and weaknesses, and it’s there where it comes alive. When the revs pick up it’s plenty of fun to drive, with a firm stance on the tarmac that enjoys being thrown around.

The steering is quite responsive considering it’s an electric setup, and you can feel how the tyres are coping most of the time.

The 1.6-litre turbo engine produces 150kW and 265Nm of torque, helping the Koup burble along nicely. That’s quite a bit of power, but considering the Koup’s kerb weight of 1390kg, it doesn’t feel as chirpy as other, less powerful packages in this segment. Turbo-lag can become your enemy at times as well.

Turning off the traction control and slipping into paddle-shift mode, flooring the Koup feels a bit slow at first. When you reach 3500rpm in first, however, the Koup certainly wakes up. Keeping the revs up through the gears is key and with a few quick taps of the paddle shifter you’ll find yourself climbing gears quickly and gaining speed quite rapidly.

We timed 0-100km/h in 7.1 seconds. It tends to feel slower than this, but this could be due to the smooth, perhaps unenthusiastic auto gearbox.

On the road, it nimbly cuts through city streets and residential areas with ease and it’s also at home cruising at 110km/h on the freeway. And when it comes to suburban driving, the Koup manages an average of 7.9L/100km, which is about on par with the official combined cycle figure of 8.0L/100km. 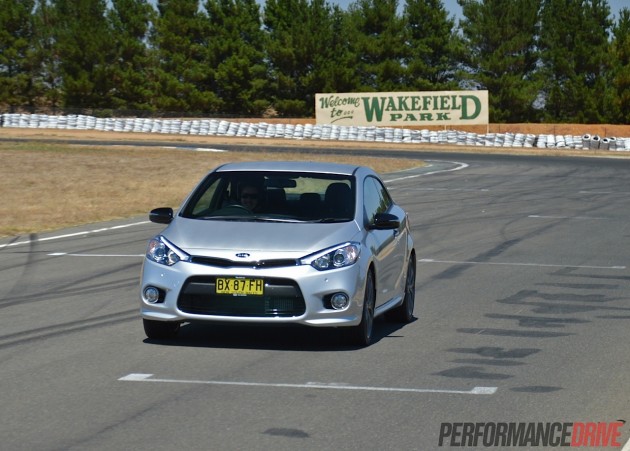 There are three steering options to choose from; Normal, Sport, and Comfort. The ‘sport’ option tightens up the steering and makes throwing the Koup into corners a bit more demanding. ‘Comfort’ obviously has the reverse affect, and for everyday driving ‘normal’ is the go.

The tighter setting can make whipping around a race track a bit of hard work, but with the car planted firmly on the road you never feel out of control. Understeer only becomes a problem when it’s pushed to its limits on tight corners.

The brakes are quick to fade under a heavy work load, but once they reach their threshold they seem to remain at that state rather than get any worse.

The key aspect to keep in mind with this car is it doesn’t have the 50, 60 or 70 years of racing pedigree behind it, like some of the competition. Kia has only been producing cars for the past two decades and only recently entered the world of compact sports vehicles. So when you compare it to other cars in the segment, it’s really quite a well-packaged vehicle that ticks a lot of boxes. 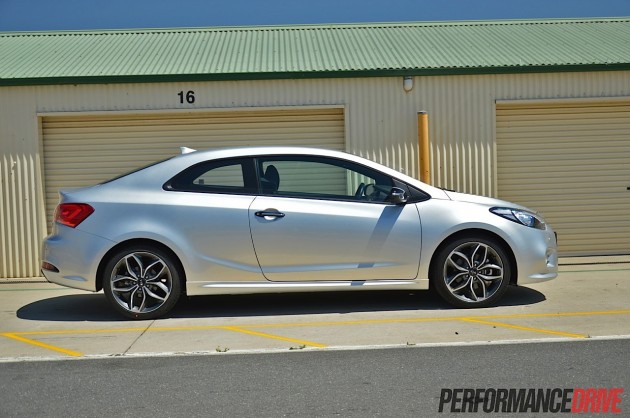 There’s a lot to love about the Kia Koup Turbo, and the future seems bright if this is just the start of what’s to come for the company. Yes it has its shortcomings and it’s not as pure as the rivals, but that’s to be expected in Kia’s early attempt at building sports cars.

From the stylish interior to the sleek exterior lines and nifty turbo engine below the bonnet, it’s definitely a platform Kia can be proud of for a first attempt. All of the elements of a fantastic little car are there. It just needs a bit more polish in driving dynamics, and a lower price tag. 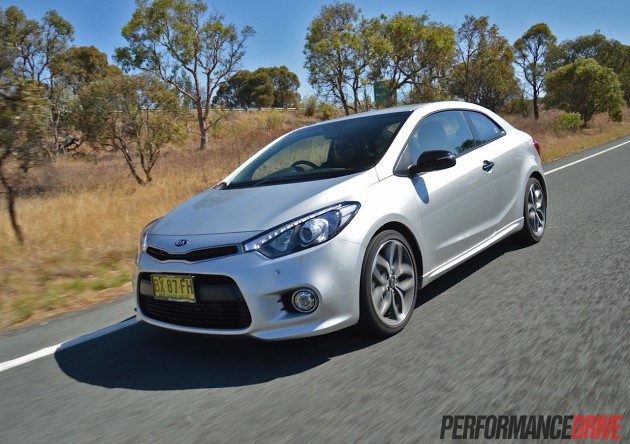 Sean specialises in news and road testing. He's a passionate journalist and currently works for a Sydney metro newspaper. Sean is also a car fanatic at heart and dreads the day Aussie car manufacturing comes to an end.