The new Mitsubishi GR-HEV concept sports utility vehicle has been unveiled at the 2013 Geneva Motor Show. The futuristic concept is said to give us a possible glimpse of a future 2015 Mitsubishi Triton ute. 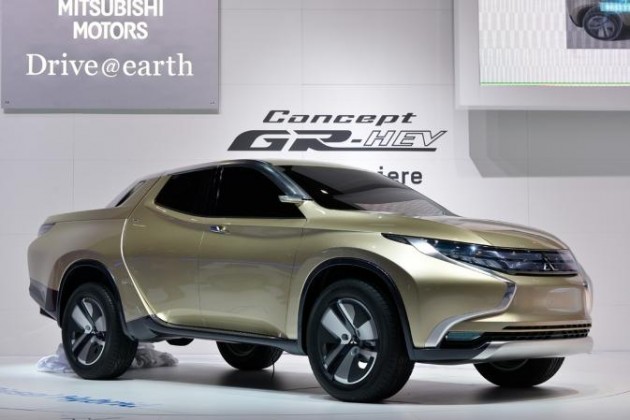 Showcasing a rather sporty and striking design character, the GR-HEV is, as you may have guessed, powered by an advanced hybrid powertrain. Interestingly, it’s a plug-in diesel hybrid – keeping with the rugged workhorse ute character.

Specifically, the system implements a 2.5-litre diesel engine, which provides top-end power, while a front-mounted electric motor helps during slow speeds and taking off. The battery units are stored within the ladder-frame chassis to help keep the centre of gravity low.

Power is distributed through a ‘Super All Wheel Control (S-AWC)’ all-wheel drive system with high and low ranges for serious off-roading. The smart drive system is able to calculate the best drive distribution between the wheels regardless of the terrain.

In terms of design, the front end shows off a muscular face with prominent cheeks, while down the sides the load tray area has been formed to blend in with the cabin styling for a continuous panel flow and contour. The side mirrors are also replaced with slimline cameras.

Although this concept won’t go into production as is, it will inspire future light commercial vehicles from Mitsubishi down the track. The inspiration is likely to include borrowing elements of the plug-in diesel hybrid powertrain.

Mitsubishi has previously set a goal to build more electric vehicles (EV) in the future, and hopes that 20 per cent of its production vehicles will be an EV by 2020.