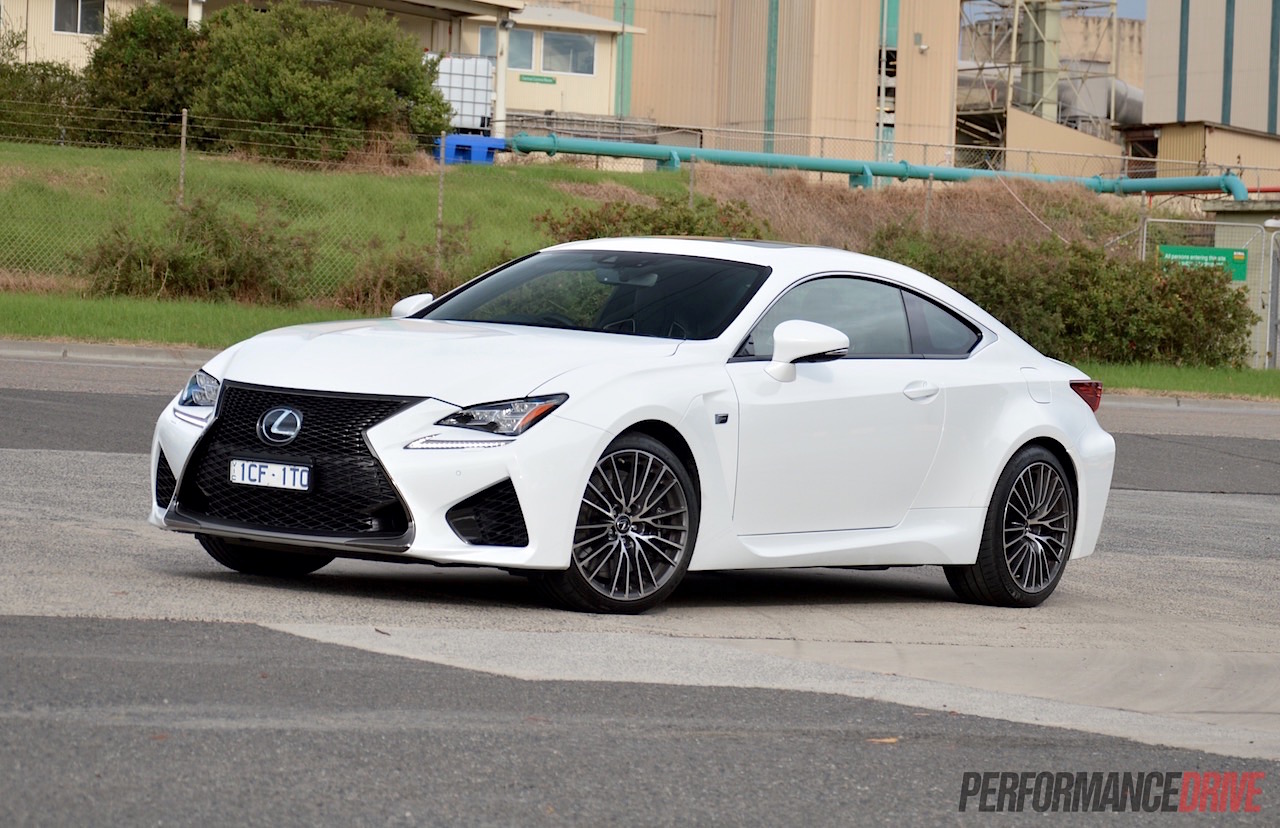 The Lexus RC F has coped a lot of flack from the media since its debut. Maybe they were just looking at it from the wrong angle (figuratively speaking)? Surely Lexus has the experience and the technology to build a highly capable and hugely desirable sports car? Just one look at this thing will certainly fulfill the latter expectation for most people. 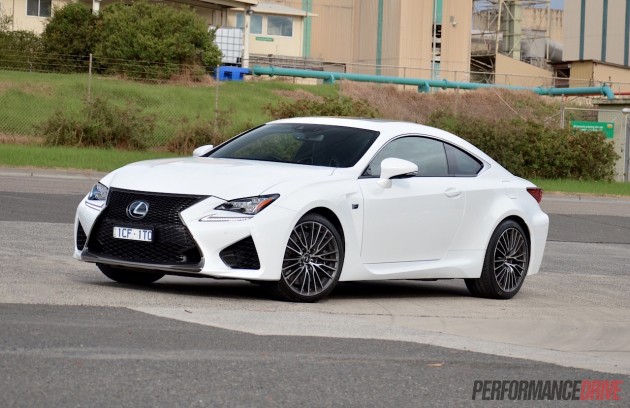 This is the company’s highest performance vehicle currently on the market. It’s not a successor to the insane V10 LFA and nor is it a successor to our old friend the Lexus IS F. No, instead this is a bespoke model based on the RC, which itself is a unique model in the current showroom.

We’re going to think of it as an evolved, two-door coupe version of the IS F sedan. It is actually a very different vehicle though, using a different platform. Lexus suggests we look at it as having the front end of the GS sedan, the torso of the previous IS 250C convertible for chassis rigidity, and the rear end of the IS sedan.

Under the bonnet, the RC F is propelled by a 5.0-litre naturally aspirated V8 producing 351kW and 530Nm. The 2UR-GSE unit is based on the engine from the IS F. It has been heavily reworked for the RC F, hence the added kick in output from 311kW/505Nm. Redline is lifted and peak power is now reached at 7100rpm. It has a higher compression ratio (11.4 to 12.3:1), a larger throttle body (76mm to 83mm), and comes with almost all new internals and new heads.

Prices start at $133,500 for the single variant grade, with the only main option being the rather tempting Carbon pack which adds a carbon fibre bonnet, roof, rear spoiler, and some unique forged alloy wheels to the mix. 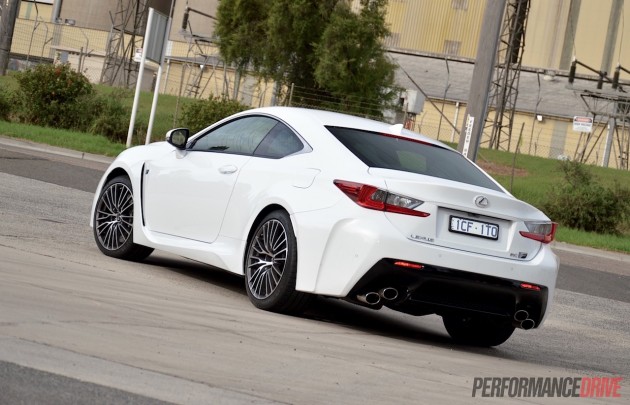 Just like the regular RC 350 we tested a few months ago, the RC F interior offers a very cool, futuristic decor. From the cabin furniture to the dials and control knobs, everything seems to blend in well with Lexus’s intelligent and sophisticated brand image.

The dash slopes forward and presents a cascading concoction of panels and portions that house their own special functions. The lower panel, for example, is for the dual-zone climate control, featuring clever temperature control bars that you gently stroke to adjust – same with the interior dome/map lights – while just below are the super-smooth volume control and tuning knobs for the audio system.

Lexus must have scored a bulk-buying bargain deal with Mark Levinson for its stereo units, as they seem to be in every model now. The bad news is, they aren’t as impressive as the cars they go in. For a $100k-plus vehicle one would expect an amazing high-end stereo. But the standard system here, despite having 17 speakers, simply sounds like it was pulled from a high-end Corolla (like most Mark Levison units). Bass and clarity are both pretty average for a vehicle of this caliber. Come on, Lexus. Surely you can do better? It does offer digital radio though, and the reception is crystal clear in the city.

Lexus has, for some silly reason, avoided the previous ‘Lexus Remote Touch’ stick system for the interface and implemented a newer, more fidgety track-pad-style setup. We simply could not get used to it. Don’t get us wrong. We love technology and new gadgets. However, even after fiddling with the adjustment options, the cursor movement remains cumbersome and quite frankly, annoying. It gives you ‘force-feedback’ vibration with every selection you make (adjustable), but with each selection or menu you go for, it’s easy to skip to the wrong one. The touch selection doesn’t always engage with one simple push either. It’s as if Lexus is simply trying to show off with this system without actually putting practicality and usability as a high priority.

Seating space and comfort is superb for the front passengers, with ample legroom, if a little cacooned width-wise, and good headroom thanks to plenty of seat adjustment. Speaking of which, the front seats, featuring foam integrated into the upholstery, like racing seats, are power-adjustable and come with heating and cooling functions to sooth your mood while you drive. These can be tilted forward electronically to provide access to the rear. Rear seat space is confined, as you might expect. As long as your passengers are more to the vertically-challenged portion of the population, they’ll be fine back there for short to medium-length journeys.

If you’re sick and tired of optional extras that keep popping up to surprise you when making a new car purchase, you need to step into a Lexus dealership. There are hardly any options that you need to add on; most models come packed with everything from standard, and most models are packaged together in Luxury, F Sport, and Sports Luxury trim, with each bundling equipment together accordingly. The RC F comes with everything the company offers for the RC, including radar cruise control, sat-nav, and electric everything. The main options for the RC F are a few different alloy wheel designs and some premium paint colours. There’s also the Carbon pack as mentioned, adding $14,000 to the price tag. 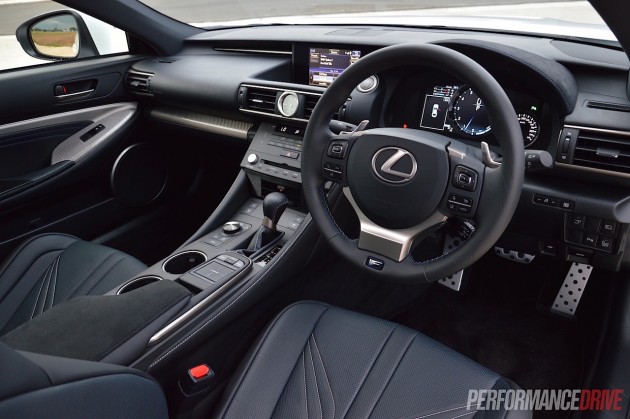 For us, there’s quite a lot of pressure on the RC F in regards to how it performs. The IS F is easily one of our favourite all-time sports sedans and proper driver’s cars of the 21st century. So does the RC F live up to the standard? Well, let us try and come up with an answer for you.

In normal traffic conditions, such as when you’re going to work or popping down to the shop, aka, most of the time you drive, the RC F is an indulgent and decadent machine. It rumbles around town like a grunted boss, and it glides around corners and roundabouts with its smart rear-wheel drive technology. The engine oozes prestige and sounds sumptuous yet assertive when you caress it. There’s no doubt, it is a refined, high-quality luxury sports coupe.

The ride is taut and the chassis is stiff, providing a distinct and reassuringly planted feel. And with splendid steering, it really is a dream ride to cruise and burble around in. You have four VDIM driving modes to choose from, so you have a choice of settings to find the best character for you. The settings alter the usual stuff, including the steering feel, dampers, throttle response, and transmission aggression. There are also three settings for the torque-vectoring behaviour of the differential (TVD), and settings for the traction and stability control of course.

Now, when it comes time for some performance driving, there are a few sacrifices we had to accept when comparing it with the IS F. The RC F doesn’t feel as sharp, nor as powerful for some reason. The engine is more powerful but the car is around 120kg heavier. In fact, at 1820kg, it is quite a tubby machine.

The steering is really fluid. It flows with each movement and engages you in with every corner. Accuracy is pin-sharp too, with high levels of feedback, although not as much as in the IS F. For some drivers, having too much feedback could become tiresome. Put it this way, if the IS F was too touchy, too stiff, and too direct for you, the RC F will be your cup of tea. On that note, the RC is better suited to a wider variety of buyers when it comes to spirited driving.

During high tempo driving in the twisty stuff the front end remains committed and secure, with no understeer, while the back end is more planted than it is in the IS F. Tackle some corners at high speed and the car will remain incredibly stable. And then in the tighter bends it pivots around like a much smaller car.

We couldn’t feel the difference in driving behaviour between the ‘slalom’ and ‘track’ modes of the torque-vectoring differential, but the Sport and Sport Plus VDIM modes make the car noticeably sharper and more eager to play. You can play around with some weight shifting and kick the rear end out for some oversteer, but it’s not as snappy as the IS F. This is partly due to the electronic diff constantly adjusting and distributing torque, as opposed to the mechanical and tighter limited-slip setup in the IS F.

In terms of straight-line performance, the RC F gathers speed relentlessly. We timed 0-100km/h in 4.7 seconds, matching the time we achieved in the IS F. The engine yells its way up the rev range like a mad man, and the higher redline means you can wring it right out until the goosebumps on your neck overflow to down to your spine. This engine is one of the best-sounding V8s around in our opinion. The metallic induction noise is a pure symphony. You just want to hear it again and again (see video below to do exactly that).

Like the IS F, the eight-speed sports automatic transmission is basically flawless here. Upchanges are smooth when you have it in the sedate driving modes, and then become direct and extremely quick in the sports modes. Downchanges are accompanied by a race-like blip of the throttle, synchronising perfectly with the vehicle speed. In terms of conventional, non-dual-clutch transmissions, it is still one of the best.

We’d love to get the car out on the track to see how it performs but we didn’t get time to organise such an occasion. On the street though and out in the mountains, the RC F is a pleasure to drive. It’s not as sharp or as focused as the IS F, as mentioned, but it is a better all-rounder and therefor probably more enjoyable for a greater part of the population. 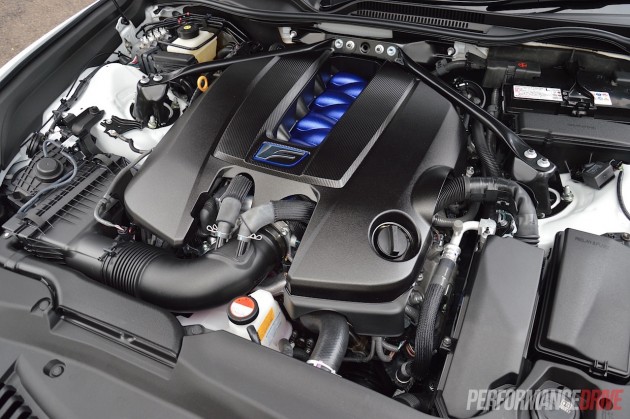 The RC F is a superb luxury vehicle, a relaxing grand touring coupe, and a very quick sports car up in the mountains. It might not be as quick or as focused as the rivals from BMW M and Mercedes AMG, but the RC does undercut them by a substantial amount in terms of price.

Does it live up to the benchmark in what we’ve come to expect from Lexus performance? We hate to sound like the other media reviews, but we’d prefer the old IS F. We love the rawness and less electronically-controlled nature of it. However, many buyers are going to enjoy the more sophisticated dynamics and smoother ride of the RC F.

CONS:
– Not as engaging as IS F sedan
– Heavy for the class (1820kg)
– Mark Levison stereo doesn’t match quality of vehicle 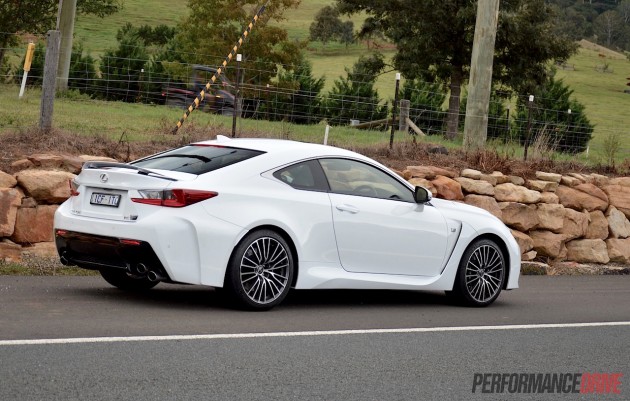