Kia has just revealed more information and specifications for the 2015 Sorento, including some Australian lineup details, prior its Paris Motor Show debut. 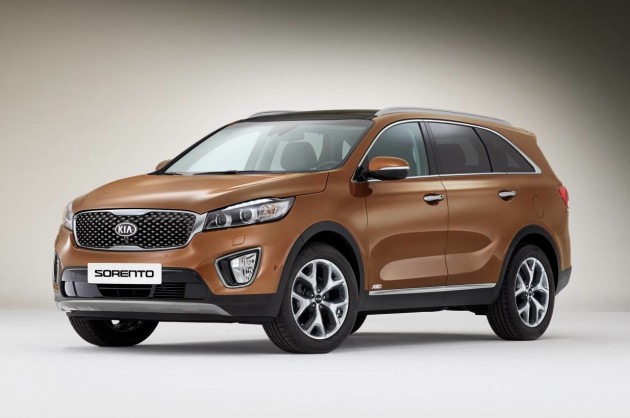 The third-generation model features a more rounded look with slight traces of the model it replaces, namely the D-pillars. The new Sorento is also a larger SUV in length (95mm longer, 80mm just in the wheelbase), with a lower roofline (shortened by 15mm). Cargo space also increases from 515 litres to 605 litres with the third row upright, and comes with an under-floor tonneau compartment in the cargo area.

Rigidity for the bodyshell has been improved by 14 per cent, and the structure is said to be stronger overall thanks to the use of more ultra-high tensile steel. Kia engineers have also focused on improving NVH levels, with new soundproofing introduced around the transmission tunnel, along with a thicker dashboard soundproofing panel and larger engine and transmission mounts. Kia says overall cabin noise has been reduced by up to six per cent.

Two engines will be on offer for Australian buyers; a new 3.3-litre petrol unit (power figures are still yet to be confirmed); and a 147kW/441Nm 2.2-litre turbo-diesel four-cylinder. There’s a possibility that Kia Australia will continue to offer a six-speed manual transmission for the entry level diesel, while the base model petrol, along with the higher spec diesel models, would receive a six-speed automatic.

Currently, all diesel model Sorentos offer 4×4 on demand as standard, with only the petrol variants using front-wheel drive; a trend we could see follow on with the new Sorento. Up front there’s also new and improved electric power steering system that’s said to provide greater steering feel and quicker response. 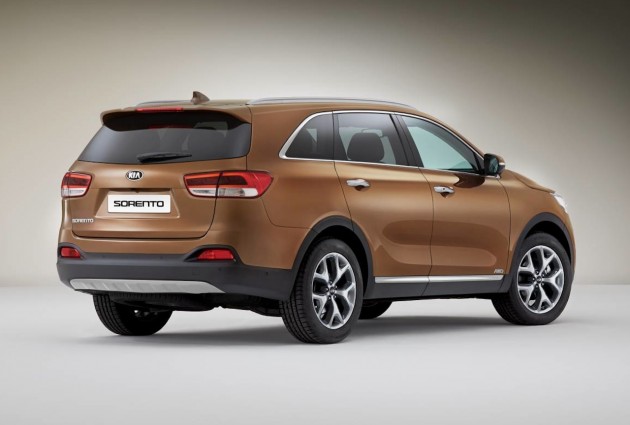 Cabin trim will come available in single-tone (black) or two-tone (black and stone beige) in cloth or leather trim. Light brown or light grey interior colours will be offered as an option.

Buyers will be able to get their hands on five or seven-seat models. The third row in seven-seat models adds the convenience of remote folding which is controlled by two levers in the cargo bay when you need to drop the seats in a hurry.

Technology-wise, there’s a new around-view monitor, visible through the dashboard display screen, that uses four cameras to help the driver when maneuvering the car around. There’s also a new power tailgate that can open when you’re in proximity to the boot for easy access.

A new interface system has also been designed which is said to be inspired by a Swiss watch, while cabin materials have been reviewed and will now incorporate a selection of higher-quality soft-to-touch items.

The 2015 Kia Sorento will be revealed in full on October 2 at the upcoming Paris Motor Show. Stay tuned for more details. It certainly looks like it’s going to be a very appealing package for the competitive SUV segment.