McLaren has pulled the wraps off the new McLaren 12C Spider right on schedule, as previously indicated. The drop-top model features a retractable hard top roof, and the same updated twin-turbo V8 engine as seen in the 2013 MP4-12C. 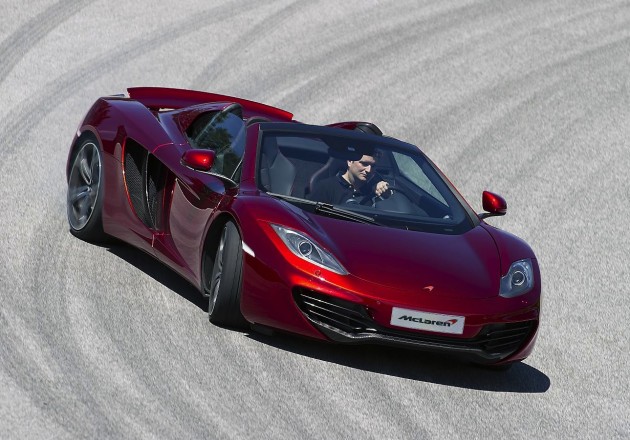 Like the MP4-12C coupe, the 12C Spider is powered by a 3.8-litre twin-turbo V8 engine producing 460kW and 600Nm, wrapped up in a complete carbon fibre ‘MonoCell’ chassis. Power is sent through a seven-speed dual-clutch auto transmission and into the rear wheels.

“I am really excited to announce that the new 12C Spider is now available to order at new McLaren retailers worldwide. The launch of our second model is an exciting milestone in the growth of our company.” 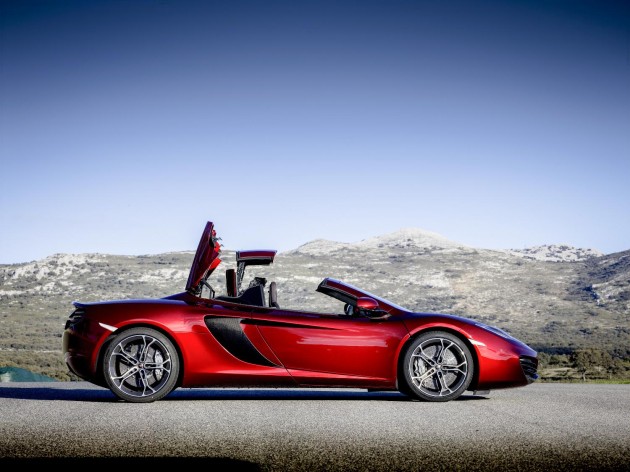 Removing the roof in any car decreases structural rigidity, as you can imagine, but with the 12C Spider McLaren has focused on retaining the dynamic and handling properties of the MP4-12C coupe. McLaren said,

“With the 12C designed originally as a convertible, its 75kg ‘MonoCell’ requires no additional strengthening for it to feature in the 12C Spider. The result is a sports car almost identical to its fixed roof equivalent in performance terms, and weighing only 40kg more with the addition of a convertible roof system.”

The Spider uses an electric hard top roof design which can be retracted at the touch of a button inside the cabin. This can be done at speeds up to 30km/h, taking 17 seconds to retract or deploy.

McLaren has put together a bit of a chart to show the difference between the coupe and the new Spider, in terms of performance and specification. By the looks of it, there isn’t much in it.

The McLaren 12C Spider is on sale in Australia with prices starting at $543,900. Orders are being taken now, with deliveries expected in November.