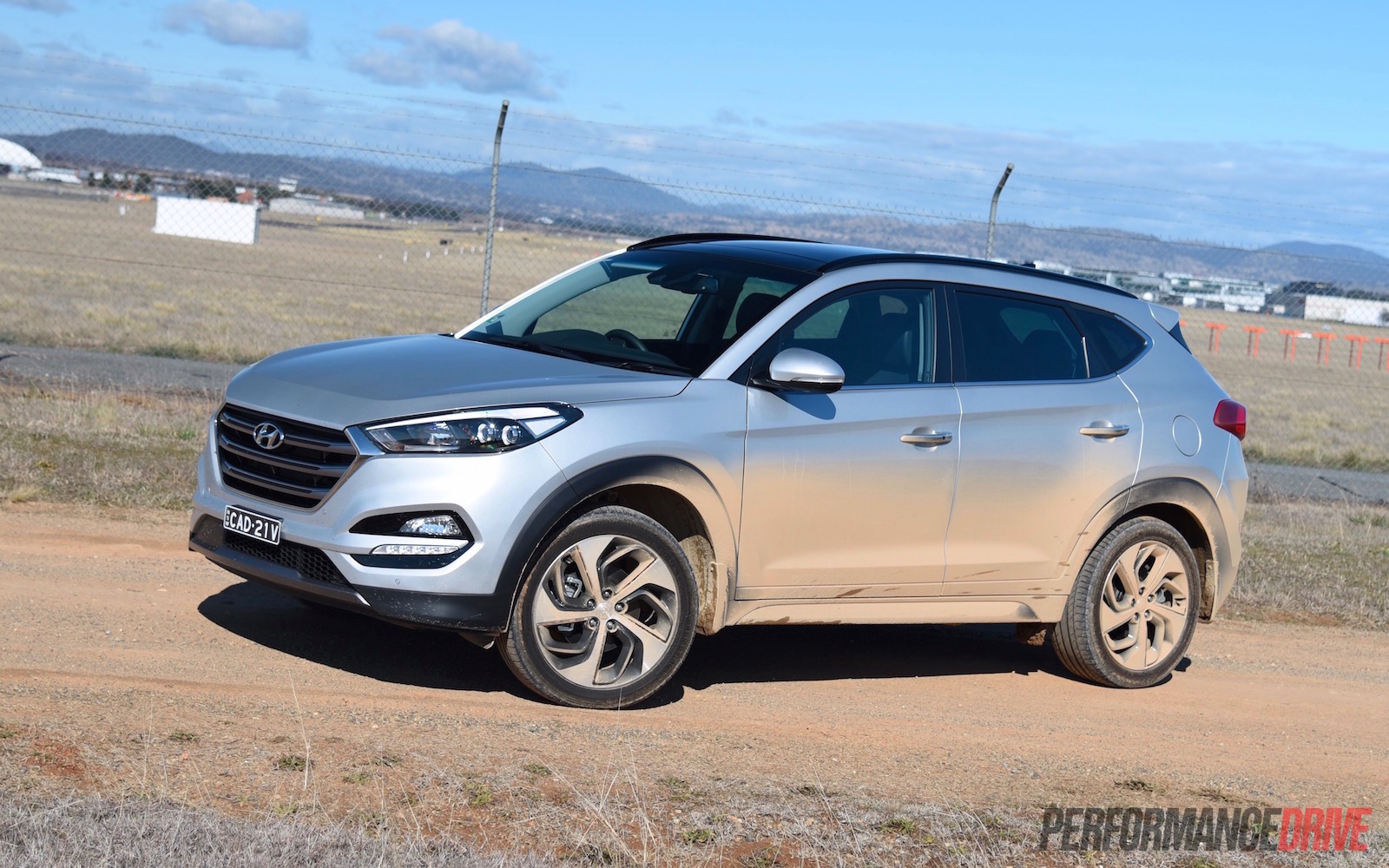 Hyundai Australia is stepping out of the small SUV market segment and into the challenging medium class with the launch of the 2015 Tucson (known as 2016 Tucson in the US). In doing so, its most affordable SUV now stands $1000 north. 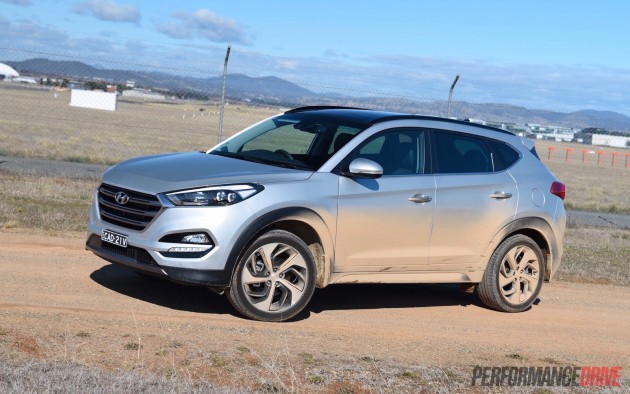 The Tucson (pronounced too-son), replaces the ix35. By around September, Hyundai says the changeover will be complete as the last of the ix35s that are still hanging around dealers are sold. At the official Australian launch here in Canberra/Thredbo, many journalists seemed to be worried about the new name which is being applied as part of Hyundai’s move to drop the ‘i’ from its models, on a global scale.

We – and Hyundai for that matter – don’t think the new name is a problem as it is effectively an all-new model anyway; it’s a touch larger in almost every dimension compared with the ix35 (except overall height), and it features more than a few major component debuts. The big issue for us is Hyundai no longer competes in the small SUV category, but instead in the medium class with the big guns like the Mazda CX-5 and Toyota RAV4. Is that a bad thing though?

Inside, the new Tucson features a larger cabin than the ix35. You can immediately appreciate the extra headroom and legroom, especially in the back. Boot space has grown too, from 465 litres to 488L. All of the dash design is new to keep up with Hyundai’s fresh decor and character, with decent-quality materials used in most areas. There are some scratchy plastics used on the lower half of the dash and around the centre console. All variants get a touch-screen interface with comprehensive connectivity, with the entry models getting Android Auto and Apple CarPlay. 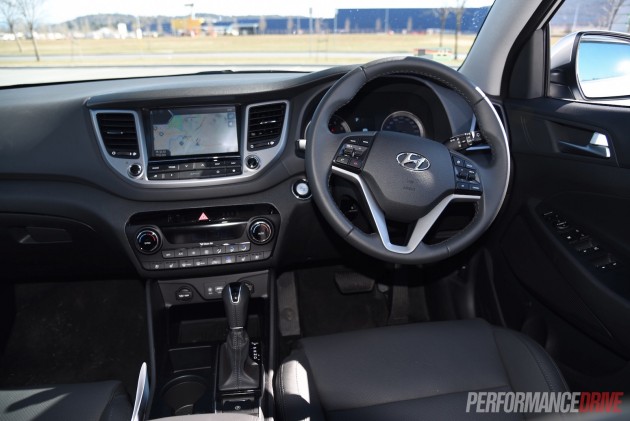 There are four variant lines to choose from, spanning from the Active (not available until Q4), the ActiveX, the Elite, and the familiar range-topping Highlander. These names are used with a number of other models in the company’s current showroom. This means existing customers will find it easy to interpret the lineup. For everyone else, each variant simply brings varying degrees of convenience and luxury, and unique powertrain options.

For the moment the ActiveX is the entry-level model before the Active arrives. Hyundai says that it expects the ActiveX to be the most popular of them all, sitting as perhaps the best value proposition. Speaking of which, prices span from $27,990 to $45,490, with the ActiveX kicking off from $30,490. The entry point is $1000 more than the outgoing entry ix35, and at the top end of the spectrum it is $4500 more than the top-spec ix35.

We’re a bit confused by the variant lineup. Weirdly, the ActiveX comes with a leather trim and Android Auto and Apple CarPlay, whereas the more expensive mid-range Elite (starting from $35,240) misses out even though it does get an 8.0-inch screen over the Active’s 7.0-inch unit. It’s not until you look under the bonnet that you see why the Elite is the dearer option.

The Active and ActiveX come with a 2.0-litre naturally aspirated engine (MPi and GDi), with the ActiveX producing 121kW and 203Nm (specs for Active are yet to be confirmed). Both are front-wheel drive. Meanwhile, the Elite and Highlander are available with either a 1.6-litre turbo-petrol producing 130kW and 265Nm, or a 2.0-litre turbo-diesel producing 136kW and 400Nm. The 1.6 gets a seven-speed dual-clutch auto, while the rest get a conventional six-speed auto. (Manual is available on both Active models.) 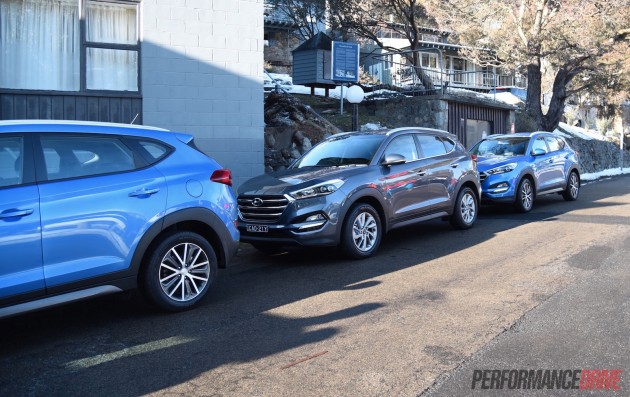 We were able to take all three available models for a test drive during the launch program, which included a drive from Canberra to Thredbo and then back again via a longer route. The ActiveX feels less refined and slower, as the figures suggest. The petrol engine makes a bit of a racket as well, to be honest. And not helping the situation, the six-speed auto seems to hunt around for gears to try and make use of the small torque window of the naturally aspirated engine; 203Nm at 4700rpm. If you want to overtake, you really have to put your boot into it. Selecting the ‘sport’ driving mode does help with kick-down response, but it is still fairly average.

Matched to the company’s relatively new seven-speed dual-clutch auto, the 1.6 is a swift unit. There’s no doubt about it. We timed 0-100km/h in 7.8 seconds, which is quick for a friendly little SUV like this. Out on the open road it surges its way past slower-moving vehicles, and it has no problem getting up to speed pulling out from corners. The only element that can let it down is the DCT.

We’re not here to take sides – DCT haters or lovers – don’t worry. We love the sheer engineering and precision of dual-clutch gearboxes, however, we think they are best suited to genuine or more focused performance cars. In everyday vehicles, like the Tucson and even lower-spec VW Golfs, they can be cumbersome. Hyundai engineers seem like they have worked hard at making the unit here as smooth and regular-auto-like as possible. And it is. But there is a noticeable delay in the clutch take-up. It’s almost like a manual, resulting in delays pulling out from tricky and/or steep side streets and during hill-starts. 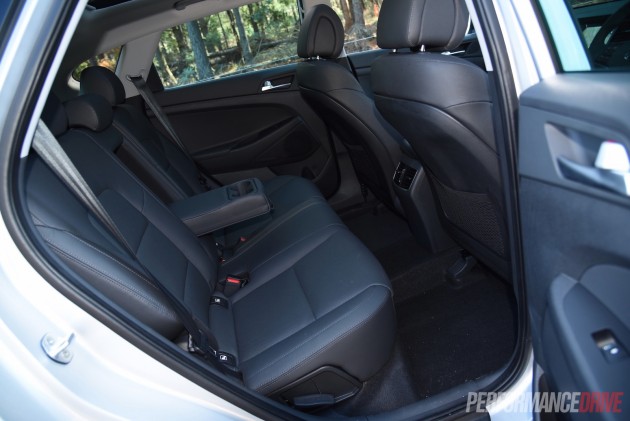 Once you get used to it and use it like a sports gearbox it can be rewarding. It’ll change up gears in no time and downchange in an enthusiastic manner. If it were our choice we’d prefer a regular, albeit sporty, automatic. Fortunately, DCTs are great for optimising fuel economy. In this case the Tucson 1.6T with all-wheel drive returns an official average of 7.7L/100km. This is the lowest figure of all petrol variants.

Stepping over into the diesel, it does seem like a more consistent powertrain package for the vehicle. With 400Nm available between 1750-2750rpm, this is the nicest and most flexible option. It pulls through the gears much easier than any other variant, and it even sounds refined and smooth. The six-speed auto is different to the six-speed unit in the Active/ActiveX, packaged together with different ratios and feeding power into a taller final drive ratio. Out on the highway the engine merely ticks over, and overtaking requires a gentle application of throttle.

As you can probably gather, the diesel is our pick. We think it is the most suitable combination specifically for this style of vehicle. It also returns the lowest official fuel consumption figure of all variants; 6.4L/100km. If you want outright speed and sportiness, the 1.6 definitely has a charismatic spark to it and it represents creditable performance. (Unfortunately, we didn’t get a chance to do our usual 0-100km/h test and video with the diesel, but we are aiming to in the near future. See below for the 1.6T video.)

In terms of handling and body control, the Tucson, in all trim levels, is a fun package. Hyundai’s local product planning team helped hone vehicle dynamics in Australian conditions, going through 104 different suspension combinations to find the right balance. And that is exactly what has resulted; balance. The dampers aren’t too firm or jittery over poor roads, yet there isn’t any body roll issue to report. In fact, it handles and holds on rather well, especially around longer sweepers. There’s a certain tautness about the suspension that gives it an almost European quality, with none of the bone-jarring side-effects that can come with the Euro options. If any aspect lets it down it’s the steering. There is a slight vagueness when you first tip it into a bend, and the communication that’s sent back through the wheel is, well, like an email; electronic. It doesn’t talk with you but instead sends emotionless messages to you. In this segment and at this price point you can hardly expect steering perfection.

The new Tucson is a great little SUV. It showcases a fantastic design, modern technologies, and decent handling and refinement. And it’s a good sign of what to expect from Hyundai in the future. Where we think it misses the mark is with the price. The starting point is about on par with most rivals but the flagship price is too high – even higher than some rivals. Hyundai has always been the cheap and cheerful brand that offered plucky products at a reasonable price. It still offers plucky products but in this case not at a reasonable price. We’re not sure if we’d feel comfortable walking past the big range of reputable SUVs that are on the market at the moment from Japan and even Europe to fork out for the Tucson. There isn’t really anything critically wrong with this vehicle but in the same respect it doesn’t stand out and offer anything significant.

Take the top-spec Highlander diesel, for example. For $45,490 you could get yourself a top-of-the range Subaru Outback diesel and save $2000. The Subaru is mechanically superior, more economical, evidently more premium and more accommodating, and it’s a pedigree-backed vehicle unlike the Tucson. That’s just one example. A similar thing could be said about the top-spec Mitsubishi Outlander, which is $1000 more but it comes with a lot more interior space, a higher level of off-road ability, and it comes with seven seats.

In our opinion, the prices offered here are simply too high for it to overshadow the wide range of well-established and mostly larger rivals. That isn’t going to stop buyers though. We’re sure it will become Hyundai’s new best-selling SUV.

Head over to our initial price announcement report for all the prices and variant range details.