Hyundai will unveil an interesting and rather cool new concept car at this year’s Seoul Motor Show in Korea called the Hyundai HND-9. The modern sports coupe is set to spawn the next-gen Genesis Coupe. 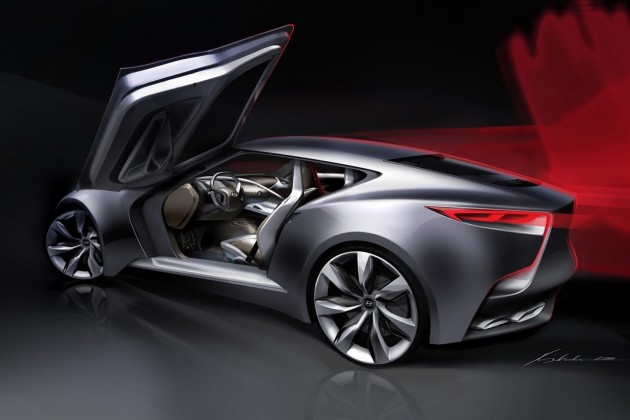 Showcasing a very attractive design with crisp modern lines, sharp yet smoothed over edges, and a dedicated hunkered down sports car theme, the HDN-9 has been created following Hyundai’s fluidic design philosophy.

As for the name, it represents the ninth concept model developed by Hyundai Motor Group’s R&D center in Namyang, Korea.

In keeping with the typical boundaries of a concept car, of which there are none, the HDN-9 features dramatic up-swinging ‘butterfly’ doors which hinge on the A-pillars. 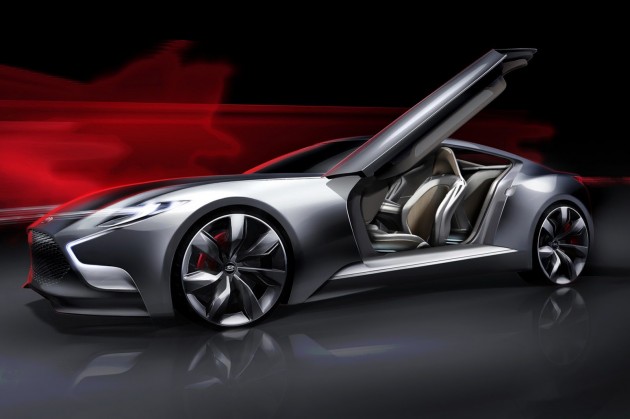 Take a look at the way the door is intricately shaped to form part of the rear side window, and the way the taillights and exhaust sections form a large ‘2’; it’s all very cohesive and pure. Hyundai recently spoke about the concept, saying,

“The HND-9 with it’s dramatic long hood and wheelbase, is a modern reinterpretation of the elegant image of a classic premium sports coupe.”

Under the bonnet, performance matches the energtic and focused exterior, with power coming from a 3.3-litre turbocharged V6 producing a cracking 272kW. The engine is similar to the one seen in the Kia GT concept car. It sends force through an eight-speed automatic transmission and into the rear wheels.

Although it is just a concept at this stage it is believed to be a precursor to the next all-new Genesis Coupe production car. The production version would obviously be a watered down form of this, without the ultra-dramatic highlights such as those swinging doors.

We must remind you that Hyundai Australia has confirmed the next new Coupe will be heading this way, which means the production version of this concept may very well arrive in Aussie dealerships by around 2015.